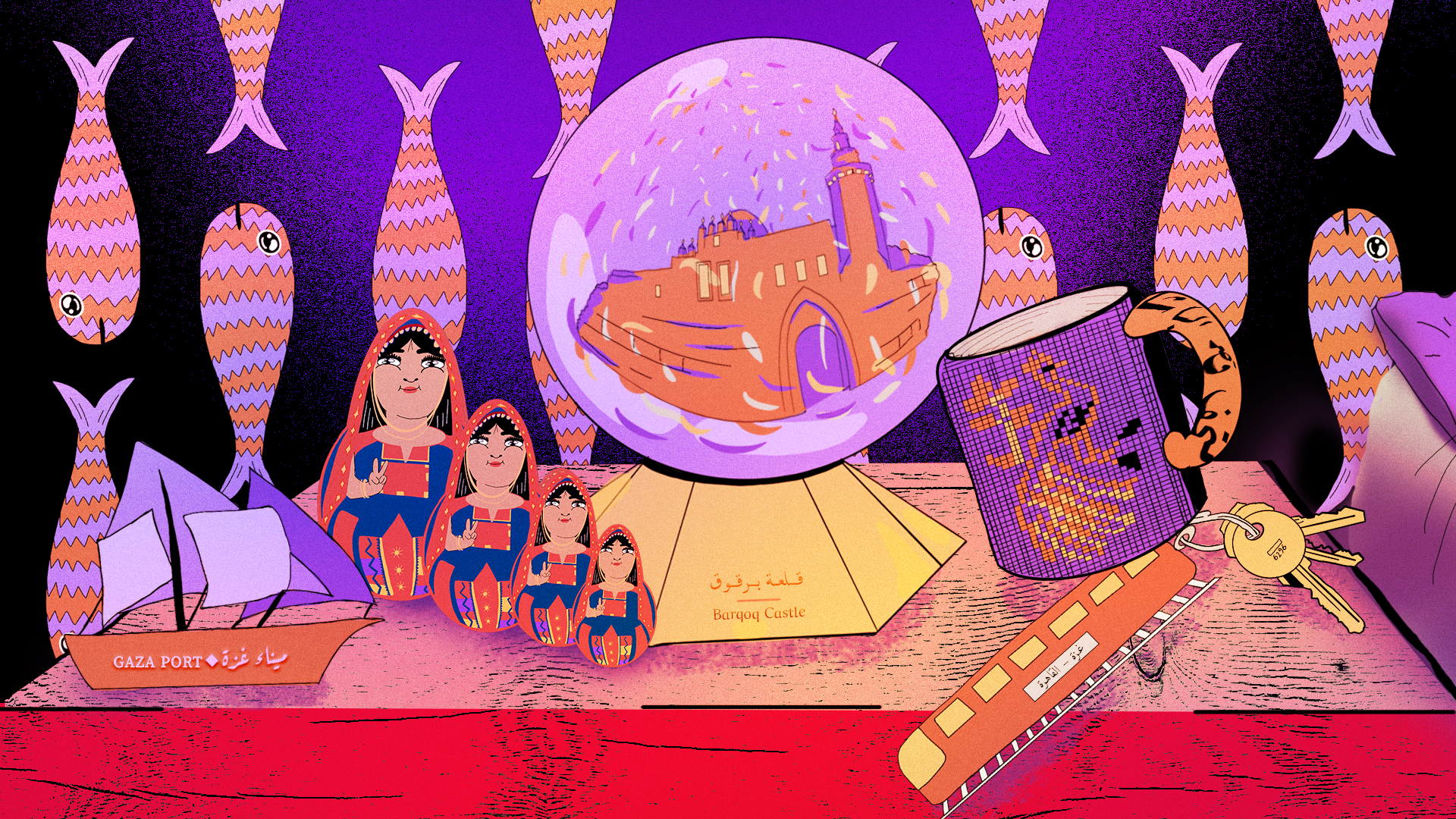 The following is a piece of fiction published as part of +972’s New Futures project. In this series, writers, thinkers, and activists share how they visualize Israel-Palestine the day after the pandemic, as a way of transforming this dystopian moment into an exercise in radical imagination of rethinking through the past, present, and future of this region, and envisioning a different reality for all those living between the river and the sea.

I received your message, my love, and hope you have smoother seas and calmer winds for the rest of your journey. I know I said that I would be back in New York to meet you there, but I am not quite ready to leave. This place is teeming with stories, and I have only just begun to scratch the surface. Being here has been a dream — every morning at the beach just like we do in Luquillo. And you should see how spectacular the sunrise is while drinking our favorite coffee and watching the fishermen return with their catch. The only thing missing is you.

I have been spending much of my time visiting relatives. There are still so many to see! They are all like stand-up comedians with endless tales about their days of resistance. My uncles had me up all night laughing with their stories about the stunts they pulled against the occupiers. When I visited last time, several years ago, they had told me, “we pushed the occupation off of Gaza, and soon we will push it off of the rest of Palestine.”

Since liberation, people have been coming to Gaza from all over — I have never seen anything like it. The elders say it is just like the old days when everyone from the surrounding regions would descend on Gaza, in part for the beaches and the fresh seafood — grilled grouper, clay pot shrimp, and fried sardines are the favorites. But people especially come for the shopping. You should see the markets! The Friday bazaars are filled with local artisans displaying pottery made of the famous red clay, hand-dyed and hand-woven rugs, intricate wicker furniture — the colors and designs dazzle for miles, it is impossible to leave empty handed. Then there is the winding gold market in the old city, the fruit and vegetable markets, the fish markets — sometimes fishermen even arrive with catches from Sinai’s Lake Bardawil. The farmers and the Bedouin come in from Bir el-Sabe’ and Sinai to sell their goods — including some of the best goat cheeses — and to display their animals.

The weekends are especially busy. Egyptians come by train and blaring their music just like in Cairo. But the biggest spenders are the wealthy families of Bethlehem, Jerusalem, and other parts of the West Bank. It is kind of a hippy town too — spiritual travelers of all types come carrying offerings for the tombs and shrines. Can you believe even the old Jewish neighborhood in Gaza City has been revived? Jewish pilgrims come every year after visiting the Abu Hasira tomb in Egypt. They gave me a talisman for you, a protection for your sea journeys.

There are miles of turquoise beaches and even a surfing scene for you to join. In the evenings, the mood is calmer as everyone settles in by the sea for a meal of freshly caught fish while watching the sun melt into the horizon. Remember how entranced we were by the sunset we saw from Sderot? Since liberation, the town has been renamed Najd, and now there is a metro from there and other surrounding towns into Gaza City. The return of Palestinians to their villages has completely transformed the countryside — and it all happened so fast. The ugly single-crop agribusiness fields were removed, and the landscape came to life in all shades of green.

Everyone who visits Gaza has to make a stop to see the tunnels. They have been turned into an educational tourist site where people can learn about the resistance. And the underground worlds that existed were far beyond anything we have seen or even imagined, and not just in Rafah, but all over other parts of Gaza too. The tours remind me of the Cu Chi tunnel tours in Vietnam — like “edutainment;” the guides are well-informed comedians poking fun at all the ways they tricked the occupiers. And let’s be honest, everyone loves the stories of the resistance. I see your eyes when you tell me about the Macheteros in Puerto Rico. Maybe this is why my favorite spot here is Noor’s Garden.

I met Noor through my uncles, who visit her often to pay their respects. We first met before liberation, when she was still living in the crowded camp. My three eldest uncles were making the rounds to all the relatives, giving out Eid money and being stuffed in return with holiday sweets. We were between visits when they stopped and insisted we first go to greet Noor and her husband. “Abu Jihad!” they yelled outside their home. There was a cat at the door, and when I looked closer another appeared, and when I peered inside her tight space, I could see her menagerie. The walls were covered with flowers and art. There were more cats and birds and antique trinkets — essentially a tiny museum in the middle of the refugee camp. They welcomed us in and we settled intimately around the coffee table covered with chocolates and nuts.

“This is our niece from Amreeka, tell her who you are, tell her your story!” Noor is a sweet older woman dressed in a traditional Palestinian thobe, and she dismissed them with her high-pitched Egyptian dialect, insisting that we be served tea first. Abu Jihad showed us a photo on his phone of a woman often mistaken for Dalal al-Mughrabi. My uncles cooed in response. “This is not Dalal,” one of them explained to me, “it is her, Noor al-Huda,” and gestured at Noor. “Go get the book,” he insisted. I thought they were all pulling my leg at first. “Fida’iyaa,” he exclaimed, pointing to her, meaning “warrior.”

“This is really you?” I asked in disbelief. She opened the book, held up her photo and said: “This was in 1982 in Lebanon, but of course we have aged now.” Dalal al-Mughrabi had been killed in 1978.

After liberation, Noor and Abu Jihad were gifted a stretch of land on the beach, where Noor was able to grow her menagerie, with her cats and birds, into a green, flowery retreat. Everyone is welcome. Abu Jihad and other elders are always there, serving up drinks and entertaining stories in the café, but Noor is harder to pin down, always flitting about, tending her garden or crafting colorful plates of food or sometimes disappearing into her secret room. I know you would love it here. I have been spending many evenings leafing through the library and listening in on the enthralling stories, which are continuous lessons in history, philosophy, politics, and world class humor. I am especially enchanted with Noor’s story, and I hang around waiting for her to reveal more. 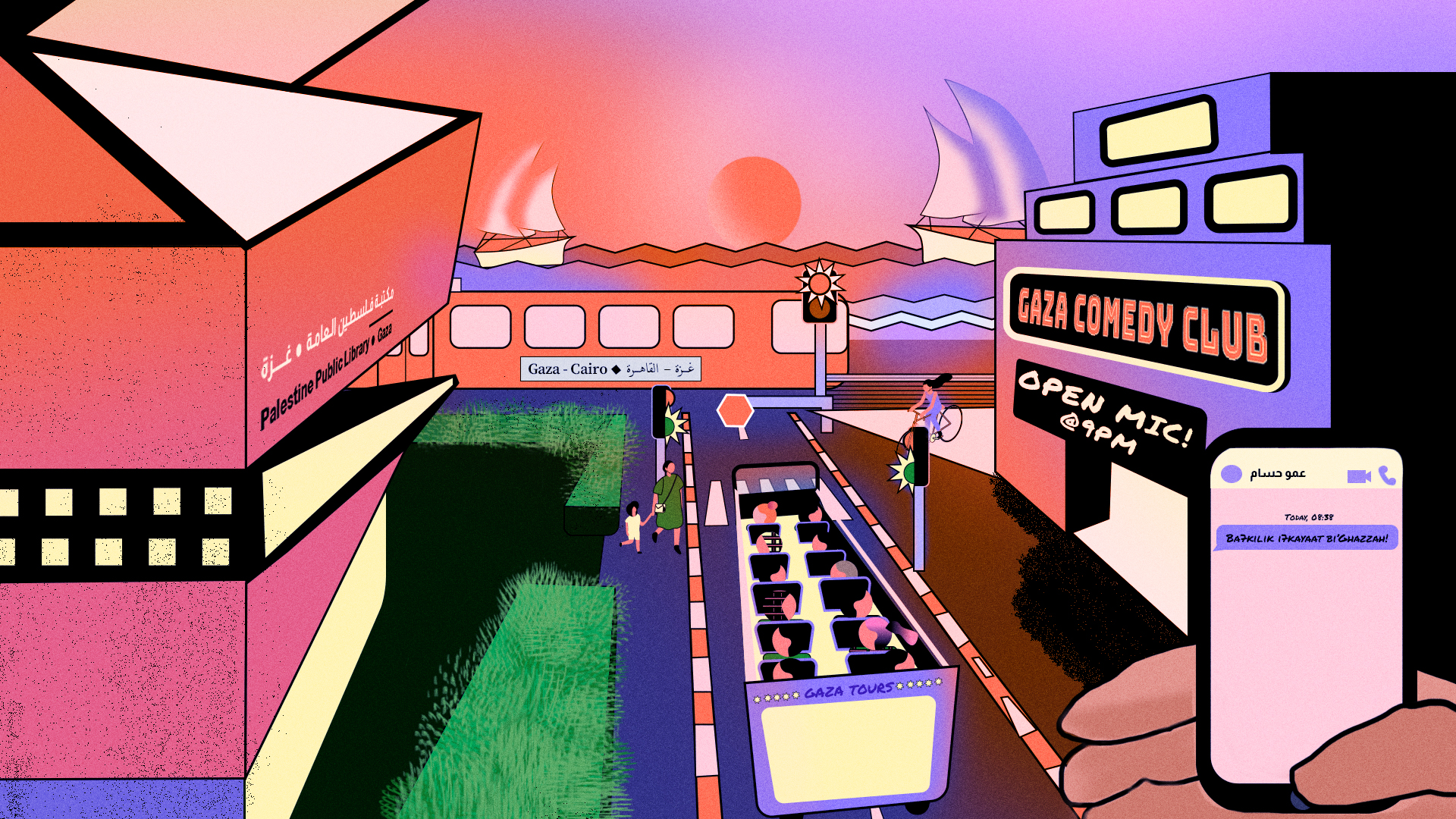 What I know so far is this: Abu Jihad was a refugee from the village of Tel al-Turmos, which neighbored my family’s village of Qastina. Of course in 1948, they were all forced out by Zionist forces, displaced to Gaza’s refugee camps, and restricted from returning to their villages, which were painfully close. Many did try to return, but several were killed. As a young man, Abu Jihad became a fighter with the resistance, a soldier, really, and when Gaza was occupied in 1967, he and the other fighters had to flee. After traveling around for a while, he ended up exiled in Lebanon, where he met Noor al-Huda during the 1982 war. Noor, an Egyptian, had come to fight in Lebanon and was committed to the Palestinian cause.

How did that happen? What compelled her to do this? I want to ask her, but have been too shy so far. Her garden on the beach is thriving and bountiful. People bring her seeds and plants from all over, and she somehow finds a way to make them flourish, even those from different climates. “We are very fortunate that we are alive to enjoy the fruits of what we fought for,” she told me one day while tending to her grapes. She rarely talks about her days as a fighter, but sometimes I catch her unconsciously reflecting. “I know they have turned the tunnels and the resistance tours into entertainment, but I hope people get the lessons in case they need it for the future. We all had our regular life above ground, and another underground. Just like seeds, it is below the earth where you go to sprout new life, especially in the face of so much death and destruction.”

How does one create an underground life, I wished to ask her, but have not yet had the courage. Can you see why I want to stay longer? And it is not just her; there are so many stories of resistance to be excavated here. She and so many like her are humble and reserved about their past, yet people from all backgrounds and political leanings come to admire her and simply be in her presence, like my formerly Islamic Jihad uncles. Maybe they too are hoping for more glimpses of her story to be revealed. This is why I am also here frequently — I study in her library and volunteer in her garden, and she welcomes me.

In the process, I learn more of her story: Noor and Abu Jihad fell in love and married in Lebanon (next time, I will ask her to tell me about what that wedding ceremony was like). When the Oslo Agreement was signed, Abu Jihad returned to Gaza with the Palestinian Authority in 1993. Because of his status as a soldier, he was permitted to bring Noor, and they moved into his father’s house — a small flat in the Maghazi refugee camp. There they remained, unknown except to the locals who admired them. Noor — her legacy almost erased by a mistaken internet post identifying her photo as Dalal al-Mughrabi.

Well, mi amor, I am going now to help Noor harvest her green almonds. Who knows what I might learn today. There are several marinas here with space for your boat and a thriving sailing community. I am sure they would love to have you. What do you say? Come to Gaza. I will wait for you here, at Noor’s Garden by the sea.

Hadeel Assali is a writer and filmmaker currently completing her PhD dissertation in anthropology.