Owned by Adelson and aligned with Netanyahu, Israel’s most-read newspaper has now devolved to actually making things up about Obama. 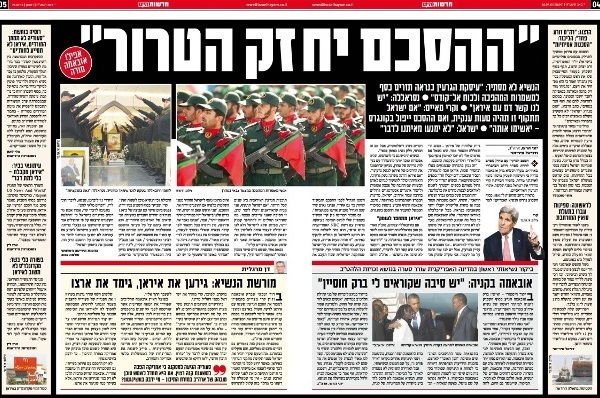 Israel Hayom headline: ‘The agreement will strengthen terrorism.’ Below (right): ‘There is a reason my name is Barack Hussein.’ (July 26, 2015)

The pro-Netanyahu daily Israel Hayom has devoted itself to attacking the Iran nuclear deal in recent days. “A shameful surrender,” “Under Obama, Iran is becoming the regional superpower,” “Every new detail just proves how stupid and dangerous the deal is” — these are just some of the ways the paper’s columnists have described the deal in recent days.

But now, Israel Hayom, which is printed and distributed for free at a considerable loss by American casino mogul and Republican party bankroller Sheldon Adelson, is taking the battle beyond the editorial pages. On Sunday the paper ran a double-spread headline that stretched journalistic ethics to their limit, or rather, ignored them altogether. The headline read: “The deal will strengthen terrorism,” with the quote, attributed to President Obama, printed in huge white-on-black letters. The sub-headline read: “The nuclear deal will likely channel money to Iran’s Revolutionary Guard and The Quds Force.”.

The only problem: the U.S. president never said any of that. The headline was completely made up, and the sub-headline took the quote out of context. Here is what Obama actually said in the BBC interview that was “quoted” by Israel Hayom. I bolded the relevant sentence, but the rest is important for context:

SOPEL: But the net effect of lifting sanctions is that billions more will go to groups like Hezbollah, the Assad regime, and that is going to destabilize the region even more.

OBAMA: Well, keep in mind, first of all, we’ve shut off the pathways for Iran getting a nuclear weapon, which was priority number one. Because if Iran obtained a nuclear weapon, then they could cause all those same problems that you just listed with the protection of a nuclear bomb. And create much greater strategic challenges for the United States, for Israel, for our Gulf allies, for our European allies.

Second, it is true that by definition, in a negotiation and a deal like this, Iran gets something out of it. The sanctions regime that we put in place with the hope of the Brits, but also the Chinese and the Russians and others meant that they had funds that were frozen. They get those funds back. A large portion of those funds are going to have to be used for them to rebuild their economy.

That was the mandate that elected Rouhani. And the supreme leader is feeling pressure there. Does the IRGC [Revolutionary Guard] or the Quds Force have more resources? Probably, as the economy in Iran improves. But the challenge that we’ve had, when it comes to Hezbollah, for example, aiming rockets into Israel is not a shortage of resources.

Iran has shown itself to be willing, even in the midst of real hardship, to fund what they consider to be strategy priorities. The challenge is us making sure that we’ve got the interdiction capacity, the intelligence, that we are building a much stronger defense against some of these proxy wars and asymmetric efforts. And we’ve sent a clear message to the Iranians. We are settling the Iran deal, but we still have a big account that we’re going to have to work. Hopefully some of it diplomatically, if necessary some of it militarily.

One can agree with Obama or not. One can believe that the deal “will strengthen terrorism,” as the Israeli prime minister says. But, contrary to what the most widely-read paper in Israel told its readers Sunday, the president himself never said such a thing.

After Haaretz’s Barak Ravid called out Israel Hayom’s fabrication Sunday morning on Twitter, some remarked that the headline of a story on the bottom of the spread was far worse, since it was taken from something the president actually said upon his arrival to Kenya: “There is a reason my name is Barak Hussein Obama.”

Only that the Israel Hayom report on the American president’s visit to his father’s homeland was headlined, “There is a reason my name is Barack Hussein,” leaving “Obama” out.

In the context of Israel’s political culture and lexicon, the juxtaposition of the fabricated quote onto the nuclear deal “promoting terrorism,” along with the “Hussein” headline, forges a fairly powerful message — one that plays into the hands of the more conspiracy theory-oriented corners of the national discourse.

Furthermore, Israel Hayom‘s decision is not bereft of racism; it is actually pretty common to hear racist references to Obama’s name or family history in Israel. Two of the more high-profile incidents included a racist Tweet (which was later deleted) by the wife of the deputy prime minister, Silvan Shalom. And of course there was also Ambassador Michael Oren’s infamous psychoanalysis of the president.

Recently, The Washington Post’s Colbert King warned of the possible damage to the relations between Jews and blacks in America because of the Israeli disdain for the first African-American president. “The ‘Obama Coffee’ insult, the rabbinical slurs and the below-the-belt punches of Israeli officials are so sad, dispiriting and potentially disrupting in ways that once seemed unimaginable,” King wrote. As the headlines in Israel Hayom show, Netanyahu and his supporters couldn’t care less.