How did a modest student protest against the destruction of a park in Istanbul turn into one of the biggest protests in Turkey’s recent history? A personal story from Taksim Square. 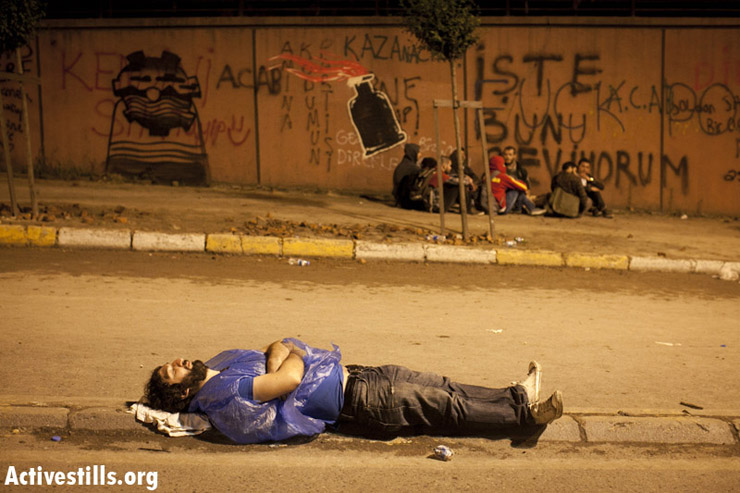 A protester sleeps in a street near Taksim Square in central Istanbul in the early morning hours of June 3, 2013. Police fired tear gas at activists after they set up barricades around the square and tried to march toward the direction of the local soccer stadium.
Oren Ziv/ Activestills.org

Gezi Park, in the heart of Taksim Square, was one of the last remaining green areas in Istanbul. The decision to demolish it in order to build a mall created anger among a people already provoked by increasingly oppressive government policies. Only two days earlier, Turkey’s Prime Minister Recep Tayyip Erdoğan named Istanbul’s third bridge after a sultan known for massacring tens of thousands of Alawites. A week earlier, the government passed a law regulating the sale of alcohol.

The violent police attack against a group of students holding a sit-in protest, together with Erdoğan’s “I can do whatever I want” attitude, was the last straw for many of us.

Although the worldwide media has been covering the events closely, I feel it is important to provide a personal story.

On Friday, May 31, we turned on the television to see the police attacking innocent students. Immediately after, we heard the prime minister’s latest declaration, saying that nothing would change his mind about demolishing the park. Fed up with his “ you can’t stop me” attitude, we decided to go to Taksim to help the students.

When we arrived at Gezi Park, we were confronted by two huge police vehicles shooting water and tear gas at us. We could not understand what was going on, and the gas was so strong! In the next few hours, we would be attacked with tear gas, water canons and plastic bullets.

We could not understand why the police were attacking so violently – we were just protesting to save a bunch of trees.

They shot more tear gas into the streets. We ran to take shelter but the police threw tear gas into the buildings, so we climbed to the sixth floor and waited. Due to jammers, our mobile phones were not working. Lucky for us, there was wi-fi. We started tweeting and posting to Facebook asking for help. If only more people come to Taksim, we thought, the police will be distracted. We had no clue what they would do to us.

Thankfully, people managed to make their way down to Taksim. The police stopped shooting tear gas in our direction and eventually retreated. We were saved.

We continued tweeting and posting on Facebook. As time passed, more and more people arrived. We stayed in Taksim until 5 a.m., as did the tear gas. There we learned that together we were stronger, that we needed to stay together.

Soon, a modest student protest against the destruction of a park in Taksim Square turned into one of the biggest protests in Turkey’s recent history. This isn’t about the trees anymore – this is a protest by everyone who is fed up with oppressive government policies. Over the span of several days, more people joined the action. Even the cancellation of public transportation – to try and stop protestors from the Asian side of the city from joining – could not stop them.

However, police violence became more brutal with each passing day. They continued to shoot tear gas everywhere: into universities, mosques and even private houses. If I am not hurt or detained by now, it is only because I am more lucky than the others.

And then came Sunday night, when Prime Minister Erdoğan called us “a bunch of marginal, alcoholic looters.”

Are we marginal? We are sitting in the park, being attacked by tear gas until the early hours of the morning, wearing goggles and gas masks. I suppose we do look quite marginal. Are we alcoholics? If consuming alcohol socially from time to time is the definition of alcoholism, then yes, I suppose we are alcoholics. Are we looters? We are tens of thousands of people united against the policies of an oppressive government. If that is what looters are, then yes, we are looters.

Erdoğan’s government is trying to divide us in order to create infighting based on our different heritages, lifestyles and religious beliefs. His discourse is of differences. But here we are, Muslims, Alawites, Jews, Christians, Atheists, Armenians, Turkish, young, old, rich and poor, all united. For the first time in recent years, we really feel we are brothers and sisters fighting to take back our freedom.

Protests are now spreading all across Turkey under the slogan “Taksim is everywhere! Resistance is everywhere!” Although police attacks in Taksim have temporarily subsided, violent attacks continue in other neighborhoods and cities. We regret that media’s attention is entirely focused on Taksim, while other neighborhoods and cities are protesting for the same reasons, and are suffering heavy police violence. The police are attacking us with their gas and batons, but we have never and will never use violence. We are responding with our patience, our sense of humor, our music and our graffiti. More importantly, we use the power of our resistance.

We will not go home without some concrete answers from the government regarding the park and our freedoms. We have already disposed of the fear we faced during the first couple of days. Every time I am away from the park, I fear that somebody might be feeling that very same despair I felt in those first days, waiting for someone to come join us. This is why we try to spend as much time as we can in the area. With every passing day, Taksim is becoming more and more crowded.

Friday, May 31 was an unforgettable day. It was the day I became a marginal, alcoholic looter. But it was also the day I restored my trust in unity, solidarity and the power of my people.

The author’s name has been removed due to legal action being taken against protesters.