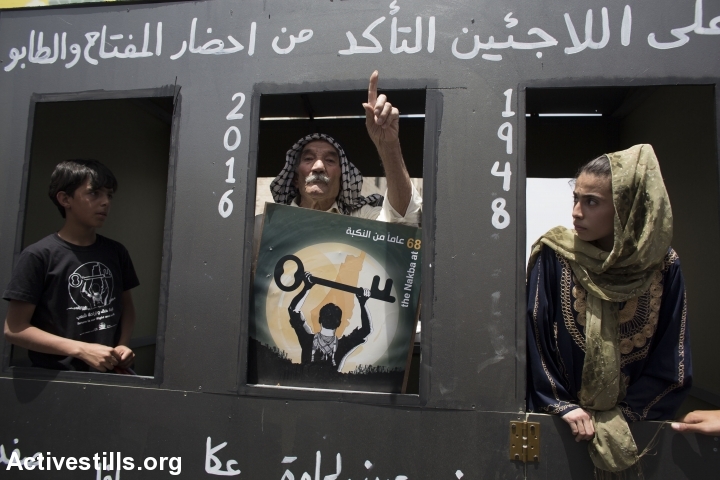 Palestinians stand inside a makeshift train, symbolically heading to the homes and lands they left in 1948, as they commemorate the Nakba day in the West Bank town of Bethlehem, on May 15, 2016. (Oren Ziv/Activestills.org)

It is a sweet July night, with the smell of citrus heavy in the air. The sound of women ululating and laughter echoes through the hills. The center of the village of Qazaza is a celebration, with men jovially drinking bitter coffee and children chasing after one another. My grandfather was one of these children, screaming in delight and trying not to trip over the bare earth.

The village had gathered in a pre-celebration of a much anticipated wedding between my grandfather’s older brother, Abdulla, and a woman who was said to be of the most beautiful in the village. The year is 1948. Despite all the hardships the village had seen with recent political upheaval in Palestine, Qazaza remained a simple place, full of families whose duties never extended beyond harvesting their crops.

The air was pierced by a sudden shout; the voice was shrill and the language foreign. Three men appeared in front of the gathering. They spoke again and the foreign language revealed itself to be broken Arabic. The villagers understood who these men were, but strained to understand what words were shattering the air, until eventually the shards formed “etlaa o bara” — “get out.”

Abdulla, the soon to be groom, stepped forward in an attempt to speak to the men. No, we won’t leave. Why are you here? You should leave.

The words barely left his mouth before a gun appeared, then a bullet, then the sound of the shot. It reverberated between the hills, replacing the sound of children and ululations. There was now only silence, a silence that began on that July night in 1948 and has hung over the village since — a stillness unbroken for over 70 years.

I first heard the story of my family’s Nakba, the “catastrophe” that upended the lives of millions of Palestinians, from my father. He told it to me in passing, I don’t recall exactly when or for what reason. I do remember the surprise that I felt. I must have been no older than 10 years old, because I recall that my most pressing concerns involved fitting in with my American peers. I didn’t understand what Palestine was or why we couldn’t return to our village. I forgot about the story for a long time after that.

My mother came to the United States as a teenager, fleeing Kuwait and the Gulf War, where Palestinians were paying the price for politics they had little to do with. My father came here as a university student, one of the first in his family and in his refugee camp community in Jordan to accomplish the dream of receiving an education in the U.S. I knew that my parents were immigrants, that I was the first to not be born in a refugee camp. My perception of my identity began to change with every summer trip my family took to Jordan, where I would spend my days struggling to learn Arabic and running errands with my grandparents. 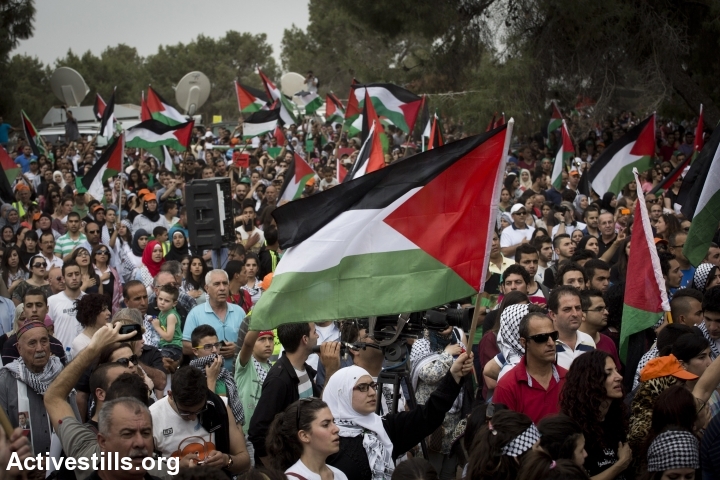 I heard the story of my family’s Nakba the second time from my grandfather. This time, I was a teenager. I knew more about Palestine but had yet to feel any connection to its place in my family’s story. I was sitting with my grandfather in the courtyard of his home in Amman, the smell of jasmine and citrus and peaches from his garden intoxicating him with the memories of the past. He told me the story. This time, I was hearing it from a survivor. I had never seen my grandfather cry before. He shrank into a boy who had just witnessed his older brother be shot by the Haganah on the night before his wedding.

Years later, as a college student, I learned that the ethnic cleansing of my grandfather’s village was part of a broader campaign of premeditated expulsions conducted by the newly formed Israeli military. In a book by the Israeli historian Benny Morris, “The Birth of the Palestinian Refugee Problem Revisited,” I found written in curt academic language the story of my own family’s tragedy. Over the span of a mere 1o days, from July 9 to July 18, in 1948, a wave of ethnic cleansing had destroyed the lives of hundreds of Palestinian families like mine. I recall reading in horror: “On 16 July, Giv’ati HQ informed General Staff/Operations that ‘our forces have entered the villages of Qazaza, Kheima, Jilya, ‘Idnibba, Mughallis, expelled the inhabitants, [and] blown up and torched a number of houses. The area is at the moment clear of Arabs.”

I learned that the story of my grandfather’s Nakba and our village Qazaza was one part of a broader campaign to empty the Palestinian cities of Lydda and Ramle, located today inside Israel proper. How strange is it to see the events that defined the lives of three generations of my family as a mere paragraph in a book? How strange is it to discover that your family’s lived experience is considered merely a footnote on the pages of history?

Israeli soldiers during a battle in the Arab village of Sassa in the upper Galilee during the 1948 war, October 1, 1948. (GPO)

Too often the Nakba is either denied or hardly acknowledged. It is said that the Palestinians chose to leave their homes, or that they deserved to be expelled for opposing the settlement of their land. Stories of survival are hardly told, yet that moment of trauma continues to define the lives of millions, condemned to a life of exile and rootlessness.

We are not a people confined to the pages of history. The Nakba is not a catastrophe that is contained in the space between paper and ink, one we can only hope will one day be remembered rightfully as the crime that is was. The Nakba is alive in every child who lives under occupation in the West Bank or blockade in Gaza, in every Palestinian refugee who is condemned to the life of a refugee camp. It is ongoing. It is not an unfortunate consequence of war; its victims are not collateral damage or the product of a moment of political uncertainty. The Palestinian people are still here, despite the wishful thinking of some that they might disappear.

Israeli right wing activists protest next to the annual Nakba Day ceremony in Tel Aviv University, May 14, 2018. of the Jewish state. (Yossi Zeliger/Flash90)

I have searched relentlessly for more information on Qazaza, my grandfather’s village. A Wikipedia stub informs me that the village lies in territory considered a closed military zone within Israel proper. There are also some online forums that seek to connect Palestinian refugees whose roots trace to other nearby villages. Most speculate that only a train stop and some buildings remain in the village.

I don’t know how many more generations of my family will be born in refugee camps and exile. I don’t know if Qazaza will forever be held frozen in time, standing still in an inaccessible military zone, or if one day it will succumb to the fate of so many Palestinian villages and towns. I don’t know if the greater Israeli public or the world will ever fully recognize the Nakba for the catastrophe that it was and for the misery it inflicted and continues to inflict on millions. I don’t know if within my lifetime, Palestinian refugees will be granted the reparations and repatriation, in the form of the right of return, that could correct this historic injustice.

Abdulla was buried that same night. The people of the village had no time to mourn. The men and women rushed into their small homes and collected only a few of their possessions. The children were scooped up into arms, strapped onto backs. My grandfather held his mothers’ hand as they tripped over dirt roads, running over damp earth while the night turned to dawn. Maybe this is why, for as long as I can remember, my grandfather would wake up as the sun was rising to tend to his small garden. He would dig down to the roots of the few olive trees and water them with special care. He would mist the branches of the peach trees with a spray bottle, as if perfuming them. Every morning, living the morning that he should have lived as a child in his village. 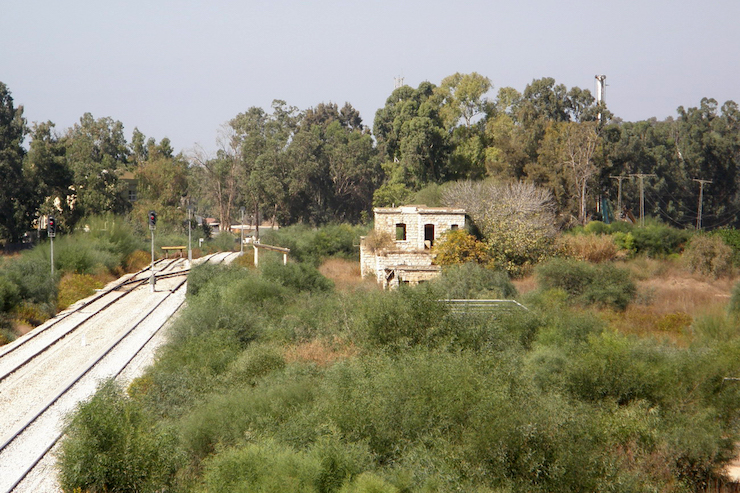 The remains of Qazaza. (Ynhockey/CC BY-SA 3.0)
Nooran Alhamdan is a Palestinian-American student of economics and political science at the University of New Hampshire.
Get Our Weekly Newsletter
Since you’re here…