The wife of hunger striker Khader Adnan tells me about how she is handling the situation. 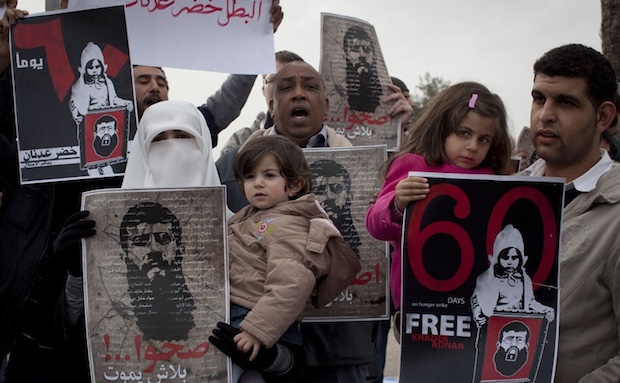 The wife and daughters of Khader Adnan at a protest outside Ziv Medical Center in Safed (photo: Oren Ziv / Activestills)

Yesterday I was fortunate enough to sit down for an interview with the family of Khader Adnan in their home in the village of Arrabeh, outside of Jenin. The purpose of the interview was to get a sense of how the family, particularly his wife and two small daughters, are coping with what is obviously a tremendously stressful and difficult period.

I found in Randa Adnan an extremely strong and articulate woman who is doing the best she could to support her husband in his time of need. Time, however, is no longer her own, nor is it on her side. She has visited her husband twice in the 63 days of his hunger strike, and today I believe she went to see him again. When she is not with Khader, she is trying to raise awareness about his struggle, dealing with a constant stream of visitors, and taking care of their two girls, Maali, 4, and Bissan, 18 months.

At the beginning of our interview she spoke with determination and the instinct for publicity that comes from being thrown in the limelight and choosing to swim instead of sink. Later, in a more private setting with my female colleague Abir Kopty, she opened up as a woman and a human being.

Randa told us of her husband the family man, the anxious and excited father to be (Randa is five months pregnant), who would wake up every morning and make her breakfast and freshly squeezed juice.

“If you knew him,” she says, “his life would have become precious to you. He is that kind of person.”

Below is an exerpt from the article published on Al-Jazeera English’s website.

Randa Adnan panics every time the phone rings, and these days it never seems to stop. For now, it is mostly journalists, family, friends and supporters asking about her husband, Khader, who lies shackled by his hands and feet to a hospital bed in Israel, while his body wastes away.

Through sixty-four days of a hunger strike, the longest in the history of the Israeli-Palestinian conflict, Randa Adnan has only been allowed to visit her husband twice, for a total of an hour, and each time surrounded by armed guards.

She speaks in a rush, a slight desperation in her otherwise resolute voice, as if time is running out and she must finish what she has to say before it is too late. Her two young daughters hang off her, demanding much of a woman who is dealing with a problem they do not fully comprehend.

“How can I tell my girls that they cannot bring sandwiches and juice to their father in the hospital,” she says, holding four-year-old Maali in her arms, who has the blue eyes of her father. The first time Maali visited the hospital with her mother she did not speak, hardly recognising the emaciated man that lay on the bed calling her name. Now she wakes up at night often, her mother says, crying out for her dad.

The full article can be read here…

Omar H. Rahman is a journalist based in Palestine, covering the socio-political issues of the Middle East. His work has appeared in Foreign Policy, the Guardian, Rolling Stone (ME), Al Jazeera English, and The National among many other publications. Before arriving in the Middle East, Omar was a television correspondent on contract with the Associated Press in Washington DC, where he covered American politics and society. He began his career in journalism as an intern for Al Jazeera television in Washington DC. Omar continues to explore the field of journalism by engaging in all media platforms, including a growing interest in photography and new media.