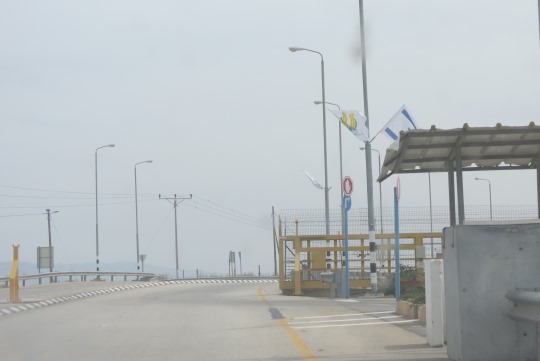 Hotel manager in Tiberias: Two members of the group you’re guiding had to move to another room last night. It’s because of all the noise the cousins made in the pool.

Me: Why do you find it necessary to point out that those were “cousins” [Hebrew code word for Palestinians]?

Manager: What do you want me to say? “Arabs?”

Me: Why don’t you just say “some people”?

Me: Being human is also part of their identity.

Manager: To you they’re human. Anyway, the couple that moved will either have to move back to their room before you leave this morning, or to a larger room on this floor.

Me: They’re Jewish, you forgot to mention that, it’s part of their indentity.

Me: To you they’re human.

On a break in the tour, I am walking down Queen Helene Street in West Jerusalem. Ahead of me walks an elderly Palestinian woman in a long, traditional, embroidered dress. She holds a heavy sack in her hands, while balancing on her head, without any manual support, an equally large parcel.

It’s been a long time since I witnessed such a balancing feat. As a child growing up in Jerusalem, the sight was more common. We kindergarten kids would stand by the fence surrounding the playground, looking out to a path that led to the Palestinian neighborhood of Shu’afat. Whenever such a lady passed, we sang to her:

Which can be loosely translated from the Hebrew as:

Silly Arab woman
She’s got an ass
Like a wine glass.

I remember singing this at home one day. My parents became extremely angry. I didn’t understand. Why would they be angry? At kindergarten everyone sang this and it was fine. Later in life, I forgot the song. It only came back me when reading Richard Wright’s “Black Boy,” a well-known memoir of growing up African-American in the American south. At one point,Wright tells of how he and his friends used to harass the town’s only Jewish resident with an anti-Semitic ditty.

At first I was in shock. How, I thought, could I continue reading a book by someone who did that? Then it came back to me.

Now it comes back once more. I find myself humming it while walking behind this lady.

She turns to a young woman who walks up the street, asking her in Arabic how far is it to Damascus Gate. The young woman, who appeared Arab from a distance, turns out to be a Jewish girl, wearing a long skirt typical of the religious Zionist movement. Her choice is to ignore the lady. She walks on as if nobody was there, much less a grandma with heavy bags on a scorching day.

Proud of my shaky Arabic, I walk over to the lady and tell her that Damascus Gate is close: only a five-minute walk. She thanks me profusely, and I head onwards, with “Arabi’a kushkushi’a” playing in my head. Then it hits me that I’m an idiot. I head back and offer to carry one of her bags. She hands me the sack, keeping the other bag on her head. Some prejudice is difficult to get rid of, and instinctively I experience the sack as being filthy.

The lady now walks by my side. She tells me of her late husband. “He was killed by the Jews, 25 years ago, in Bethlehem.” I tell her that I am a Jew. She doesn’t seem fazed. Both her hands being free, she pulls out of her wallet photos of her eight daughters and two sons. One of the sons left for the Ukraine as a medical student, graduated there, and hasn’t visited since.

I tell her of my own family, of my two sisters and of my parents. “My father works on television. My mother is a…” Damn. how do you say “artist” in Arabic? I tell her that I grew up in Jerusalem, that I remember seeing women balancing loads the way she does, and that I think it’s cool. I say nothing of “Arabia Kushkushi’a”. Maybe she can figure out that I, like the girl who ignored her, came from that, but that something in this life forced me to take a bit of her load into my arms.

Bar owner at Tiberias: Sorry for all the cleaning up going on. We stayed closed for three days [during the Muslim holiday of Eid al-Fitr]. The city was full of cousins, you know.

The tours are dual-narrative ones. Along with me, a Palestinian guide accompanies each group, and many different speakers meet with them. Days dedicated to the environs of Bethlehem typically begin with meeting a representative of the settler community, in the town of Efrat.

This time, we arrive at the home of a new Efrat speaker. Twenty-one-year-old R. is a guide at a local educational center, who teaches Israelis of the region history from a settler perspective. Before we even get through the door, she steps over to me and asks: “Would you mind if I joined you for the rest of the day?”

The rest of the day, she knows, includes a visit to the Aida refugee camp and to central Bethlehem. According to Israeli law, any Israeli citizen who enters central Bethlehem is committing a criminal act. She knows that too. I don’t mind having her along and neither does the Palestinian guide, Ibrahim. We bring it up with the group at the end of her talk. By now they are so in love with her, regardless of whether they agree or disagree with the paradigm she presents, that they wouldn’t mind having her along for the entire tour. Then her mother asks if she can join too.

The following hours present a very different experience for mother and daughter. R. has never been to Bethlehem, which is situated only two miles north of her hometown. She does not know what currency is used there. For her, this is a learning experience. For her mother, it is a nostalgic one. Prior to the first Intifada, settlers from Efrat and the nearby communities known as “Gush Etzion” frequented Bethlehem and were habitually in contact with Palestinians. She is amazed by how the city grew and by all the nice cars.

We arrive at Aida just as the local imam prepares the faithful for the Friday prayer. His sermon is broadcast throughout the camp on loudspeakers. It sounds wrathful. The imam is yelling. R. and her mother are standing in the camp’s slum-like environment, at the base of the separation wall. It is decorated with portraits of Palestinian militants and martyrs, some holding guns. One IDF watchtower was scorched by burning tires. It is chipped at the base, nearly taken apart.

They are here without fear or hate. They are listening to Ibrahim, as he tells of the refugees’ plight. They are both doing something enormous, at least to my heart. The sermon ends as do the explanations. We hurry on, so that the two can make it home in time for Shabbat.