Ahead of a mass planned deportation, +972 Magazine joins two members of Knesset on a trip to Rwanda and Uganda to investigate what happens to the asylum seekers Israel is sending there. The one thing that remained most elusive: a future for asylum seekers pushed out of Israel. 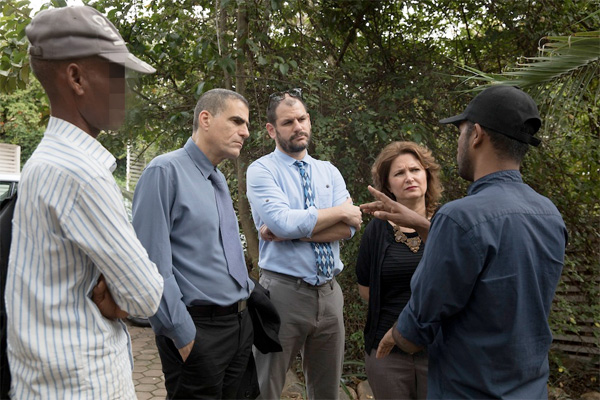 KIGALI, Rwanda — A dark cloud of ambiguity and fear has settled over Rwanda in the past few days. According to workers in international humanitarian organizations, the protests against the deportation of asylum seekers, held outside the country’s embassies in Israel and across the world, have put pressure on the government. For years, President Paul Kagame’s tyrannical regime has tried to rebrand itself in both Africa and across the world, following the genocide that took place here over 20 years ago. Accusations of abuse toward African asylum seekers aren’t helping.

For years I have been monitoring the situation of asylum seekers in Israel: since the first ones came to Israel from Darfur in 2005, through the rising tensions in south Tel Aviv, the establishment of Holot detention center, and various protest movements. Over the past few weeks I have stood with them in hours-long lines at Interior Ministry offices in and around Tel Aviv.

Most of those with whom I spoke told me they prefer prison over deportation to a “third country,” namely Rwanda or Uganda. While Israel claims it has reached an agreement with the former, the Rwandan government has repeatedly denied signing any deal to receive refugees deported from Israel. Past experience, along with various remarks made by the authorities, signal that Rwanda is the main destination.

While activists and asylum seekers protested outside embassies and consulates around the world, I headed for the airport with Meretz MKs Michal Rozin Mossi Raz, and refugee attorney Asaf Weitzen, in order to see for ourselves what is happening in those third countries, to which thousands of asylum seekers have already departed, and to which thousands will soon be deported. 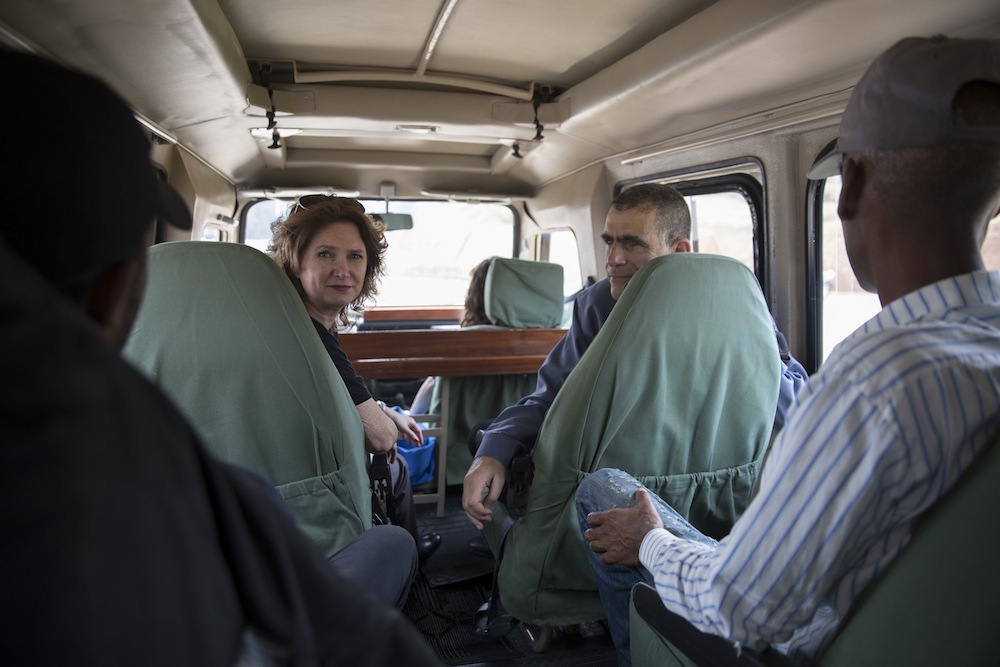 As we land in Kigali, it is hard not to think about the journey of asylum seekers who “voluntarily left” Israel. Several thousand Sudanese and Eritrean asylum seekers in recent years have accepted a $3,500 incentive from Israel to leave, with the promise of legal status and safety in Rwanda or Uganda. Upon arrival, they are taken to a “hotel” in which they stay for 48 hours, after which they are pressured or forced to leave the country and once again start their journey as refugees.

The the Israeli government is adamant that Rwanda is a safe country, and is relatively well off compared to other African countries. Over the past few weeks, Israeli media outlets have reported about Rwanda’s relative prosperity and showed images of Kigali’s richest neighborhoods. The situation on the ground is far more complex. In making such claims, however, one must be careful to differentiate between how Rwanda treats its own citizens, how it treats those refugees from Burundi and the Democratic Republic of the Congo who live in refugee camps, and asylum seekers from Israel, all of whom face entirely different experiences.

‘It is obvious the authorities are ashamed’

Hours after we land, we begin a series of meetings with various diplomats and representatives of international humanitarian organizations. Some of the meetings I attended personally, others, the delegation members relayed to me afterwards. MKs Rozin and Raz had hoped to meet with Rwandan government officials but they declined, claimed that there is nothing to discuss since there is no agreement with Israel. (The Rwandan embassy in Tel Aviv also refused to meet with them.)

While some of those whom we met suggested that the basis for an agreement between the two countries is not purely economic, but rather aimed at strengthening ties and other long-term interests, a representative of one of the humanitarian organizations had a different take. According to Israeli media reports, as part of the secret agreement between the two countries Israel has committed to pay Rwanda $5,000 for every asylum seeker sent to Kigali. Assuming Israel sends just 10,000 asylum seekers, that would amount to nearly two percent of Rwanda’s $2.58 billion annual state budget. 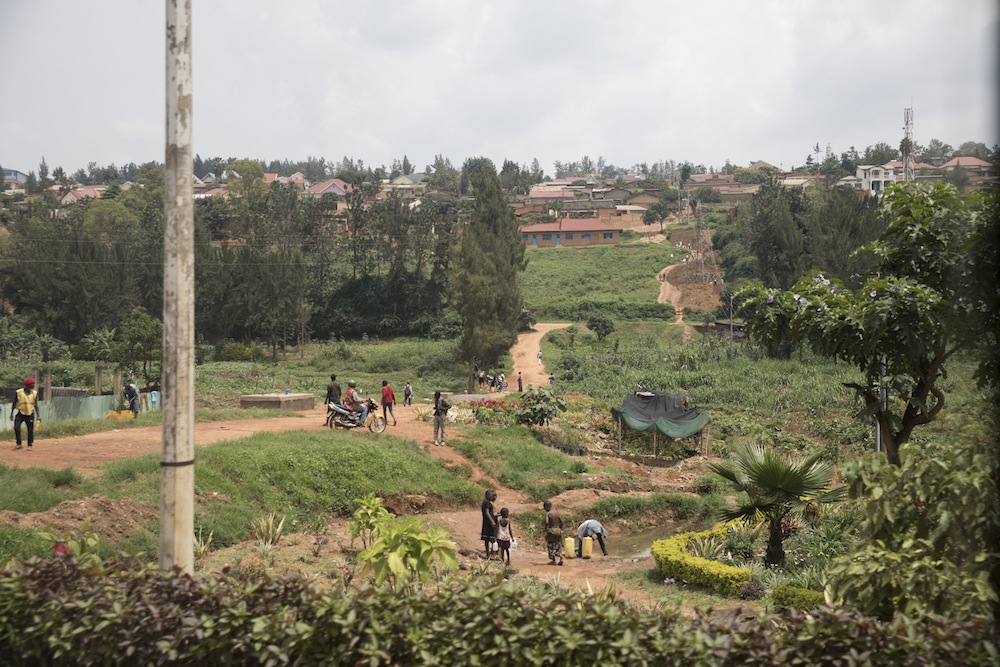 “I would have been happy to meet with government officials,” says Raz. “I did not expect it to happen, since it’s obvious the authorities are ashamed of what they are doing and are uninteresting in meeting parliamentarians like us.”

The consensus from all those we spoke to, however, was the same. Rwanda, which is trying to project a new image to the world, cannot handle the 170,000 refugees — mostly from the DRC and Burundi — and some of whom have been living in refugee camps for over 20 years.

Meanwhile, the government takes a hard line on public criticism, says one of the humanitarian representatives with whom we spoke. In one case, a senior official with whom we met practically begged us not to publish details of our meeting. “If they hear how I speak about the government, I will be out of the country tomorrow — no questions asked,” he said.

Another aid worker told us there is zero public discussion about asylum seekers being sent from Israel, and that all the information about it is coming from civil society organizations in Israel, which they view as as credible.

Much of that information has come from a report published by independent activists who interviewed refugees in Europe who had left Israel via Rwanda before continuing onwards. Together, they have been able to paint a fuller picture of the deportation process — and how upon arrival in Rwanda the asylum seekers receive no status or protection, and often fall prey to quasi-official smuggling and trafficking networks. 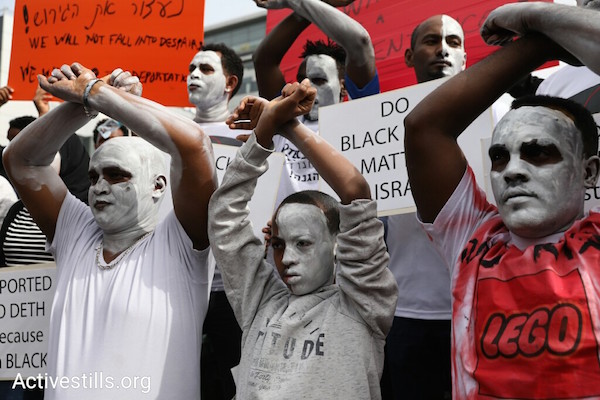 “Unfortunately, the meetings we have had until now have not put us at ease,” says Michal Rozin during a break between meetings and interviews she is giving to Israeli media outlets. “This is a topic that goes undiscussed in Rwanda. They deny the existence of an agreement between the two countries, and claim that [the deportees] won’t be granted refugee status — which would give them the right to live in refugee camps — since they are deported from Israel, a country that can grant them refugee status.”

“The aid workers do not understand why Israel is sending refugees here,” she continues “There are already 170,000 refugees in Rwanda. They ask us why we don’t take care of 40,000, and why we let them in in the first place. As Israelis who oppose the deportations, we have no good answers for them.”

‘It is better to struggle in Israel’

At noon on Thursday, we meet two asylum seekers, some of the very few who left Israel and were able to remain in Rwanda. The number of people who have remained in Rwanda after being sent here from Israel since 2015 is the single digits, we are told. The two men, who live on the outskirts of Kigali, have a message for asylum seekers still in Israel: “Do not agree to come here. Go to jail [instead],” say M., 32, who left Israel in 2015, and T., 38, who left in 2014. Both are originally from Eritrea. Neither of them have been able to find work or any sort of stability since arriving here, they say. They left Israel after the state threatened to send them to Holot, an detention facility for African asylum seekers in deep in Israel’s Negev desert.

M., who lived in south Tel Aviv and washed dishes for a living, still speaks Hebrew. “They brought us to Rwanda but we didn’t get anything. We are surviving from day to day,” he says. “After we landed at the airport they took us to a hotel. After three days they told me to go to Uganda. They wanted us to pay $300 to stay at the hotel. I refused to leave, but I could not stay for longer than two weeks.” 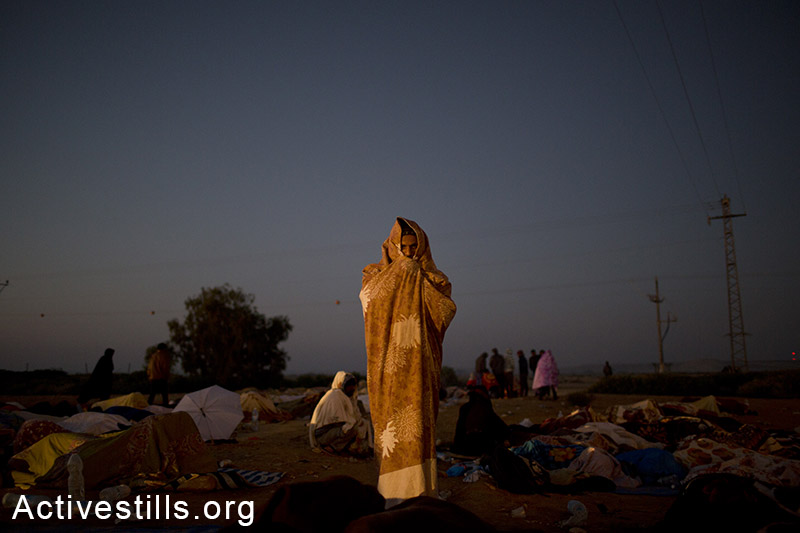 African asylum seekers wake up in the early morning of a second day of protests outside the Holot detention center, Negev desert, February 18, 2014. The protesters were calling to close the prison and to recognize the refugee rights of the African asylum seekers living in Israel. Tali Mayer/Activestills.org

“We did not get status. We were not accepted to the refugee camps here,” T. adds. “We have no work, no food. There is no reason for anyone to come here. It is better to struggle for status in Israel, even if from inside Holot.”

During our meeting, Rozin calls M.’s brother who is still in Tel Aviv. His sister managed to make it to Europe, where she was granted refugee status. Thus, one family exemplifies how different countries deal with the same asylum request. The brother in Tel Aviv told Rozin: “I hear that it is hard for my brother in Rwanda. I am not going there, I will go to jail if necessary.”

At the end of our meeting, Weitzen takes depositions from both M. and T., in order to file a petition to Israel’s High Court regarding their situation in Rwanda, which flies in the face of everything that was promised to them when they signed the deportation papers four years ago.

Weitzen, who for years worked for the Hotline for Refugees and Migrants, says that according to the legal situation in Israel, if there really is an agreement with Rwanda, Israel cannot jail people without restriction like it is planning to do. “We are demanding that Rwanda not accept the deportees.” he says.

Over the past few weeks, the Rwandan government has denied that there is a deal to accept asylum seekers from Israel. Whether through its official Twitter account, or a letter presented to protesters outside its embassy in London, Rwanda argues that no such deal with Israel exists.

“In our view, as long as there is a threat of jailing people, as long as people are deported to Rwanda — there is a deal,” says Weitzen. “We have reason to believe that Israel would not have deported and jailed, that it is lying. And if Israel is lying, Rwanda will have to ensure that Israel stop defaming it or putting on the blame on it for the situate. One of the ways to do so is to make sure that Rwanda does not accept asylum seekers from Israel unless they themselves went to the embassy in Tel Aviv and asked to leave for Rwanda. “The fact that Rwanda allows this harms asylum seekers in Israel, before they even decide whether they want to leave for Rwanda. They lose their work permits and freedom.”

Over the next few days, +972 will be reporting from Uganda, where many of the deportees sent to Rwanda currently live.

BECOME A MEMBER
More About Uganda 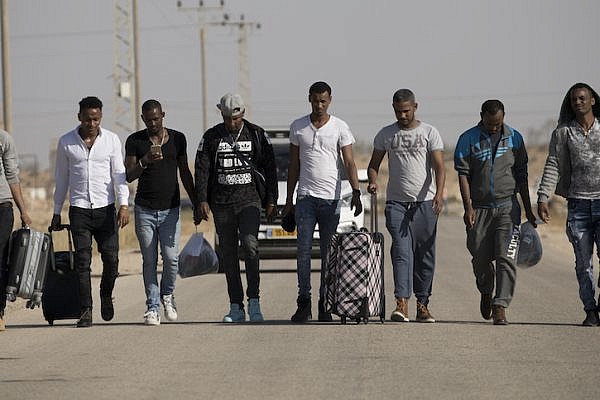