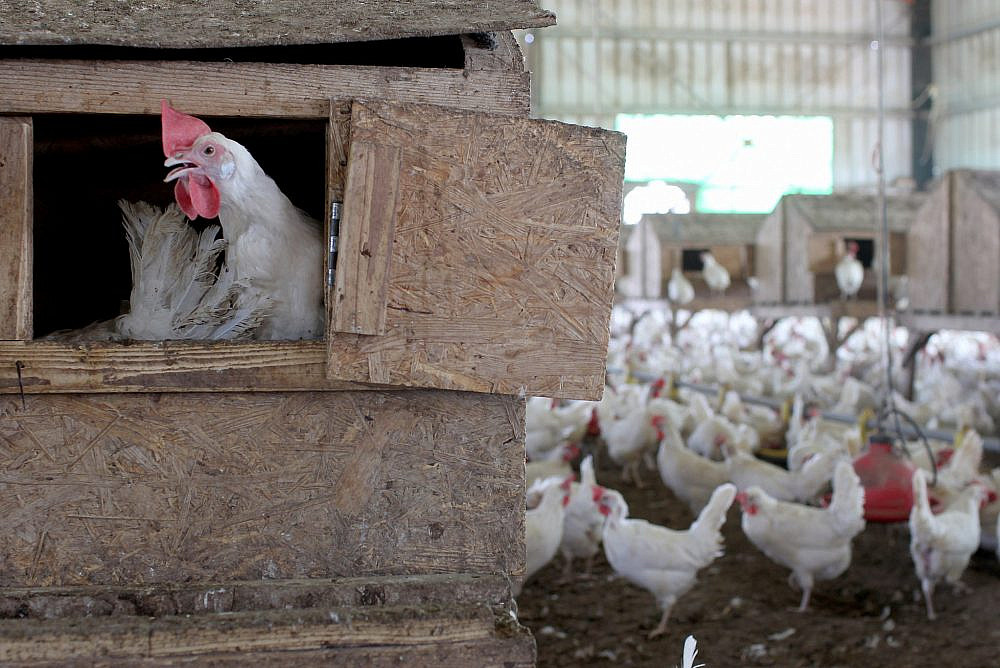 Chicken inside a chicken barn at the Givat Olam organic farm, near the Jewish settlement of Itamar, West Bank, April 9, 2012. (Nati Shohat/Flas90)

Over the past few decades, industrial cow, sheep, and chicken farms attached to Israeli settlements have increasingly encroached on Palestinian land belonging to villages like ours in the South Hebron Hills of the occupied West Bank.

In addition to developing at the expense of traditional Palestinian agriculture, which has been practiced by our communities for centuries, the settlement farms are posing significant health hazards to Palestinian residents, their herds, and the local environment — all while benefitting from infrastructure denied to surrounding Palestinian villages.

As Palestinians living in Tuba and Umm al-Khair, two of the villages in the Masafer Yatta area, we gain nothing from these farms. Tuba is surrounded by the settlements of Ma’on and Havat Ma’on, the latter of which is regarded as an “outpost”; both were built on our land, where we used to cultivate grain crops and graze our herds. Now, there are Israeli-owned livestock farms between the settlement and the outpost, all of which take up land we can no longer access.

Radwan Abu Jundiya, a resident of Tuba, says his own suffering is an example of what has happened to all the people of his village, whose sheep now number less than half of what their parents had at the time building commenced on the surrounding settlements in the 1980s.

“We had more than 300 sheep and goats, and as a child my family made a good living from them,” Abu Jundiya says. “The herd was enough to support my parents in raising me and my ten brothers and sisters. Today I am married and the father of three girls, and I can barely even pay for the food I buy to feed my sheep.” 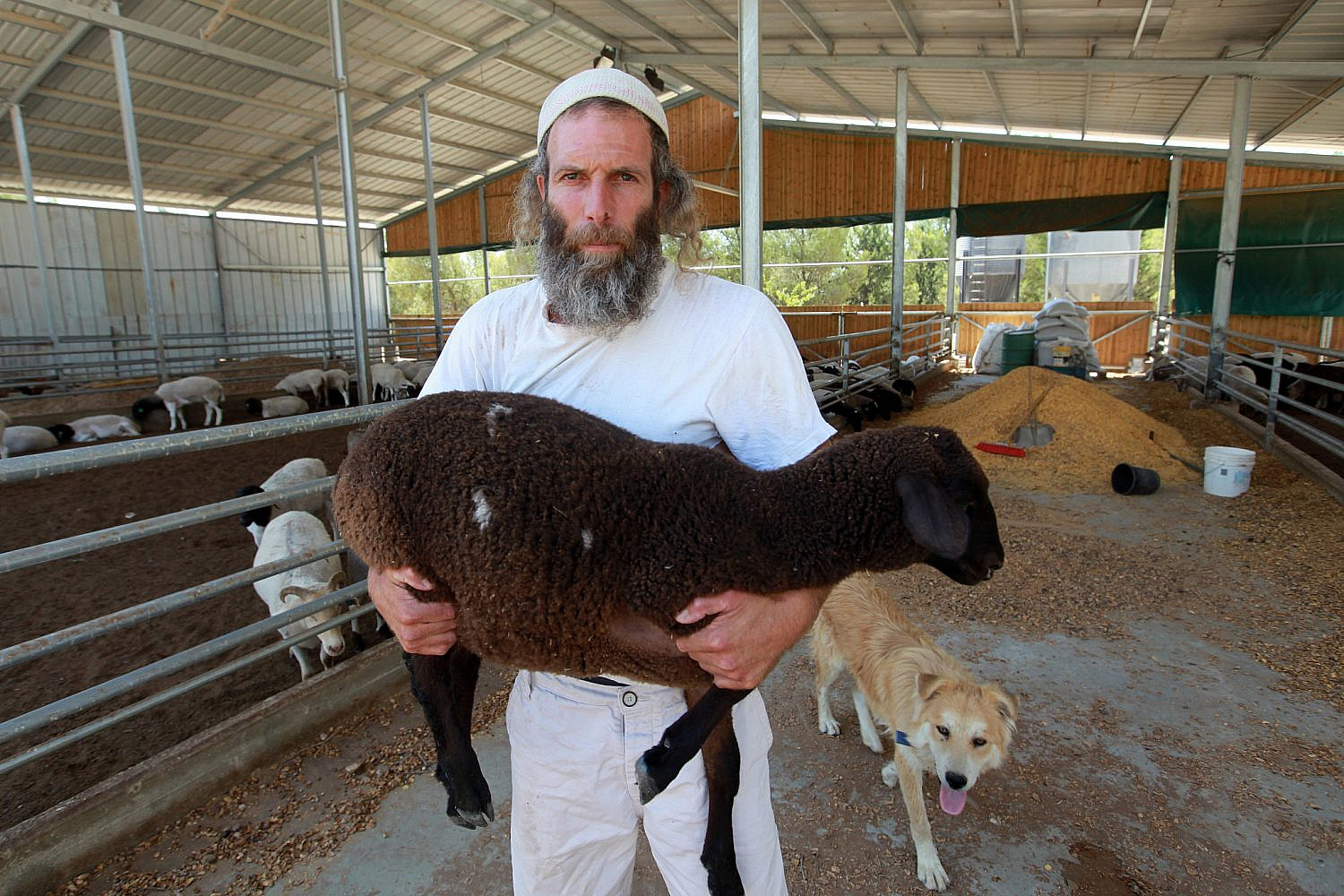 All the wastewater from the cow farms runs down into the valley where our sheep and goats graze. This water is full of harmful chemicals that are used to wash the cowsheds, thus contaminating the food of our herds and causing either direct poisoning, or disease and gradual death.

Before the establishment of the industrial farms, Abu Jundiya says, the animal herds did not require vaccinations. Now, “they face diseases that we didn’t even know of before, which are causing deaths in large numbers.”

Even if lambs, for example, are healthy at birth, after consuming their mothers’ milk, “they begin to have diarrhea, which can kill them before they are even a day old.” The milk, Abu Jundiya explains, is clearly contaminated, as has been confirmed through tests conducted by veterinarians.

The pollution caused by the settlement farms is killing over half of his newborn lambs every year, Abu Jundiya says. “This year I have already lost 40 lambs out of 70 in total.”

In Umm al-Khair, meanwhile, we are surrounded on three sides by the Israeli settlement of Carmel and its farms. A huge amount of land was confiscated in the 1980s to build and fully equip these farms. When the construction of the farms began in the early ’90s, our community thought that it would be a one-off project. But the confiscations continued, with more than nine chicken farms built — each taking up more than two dunams. 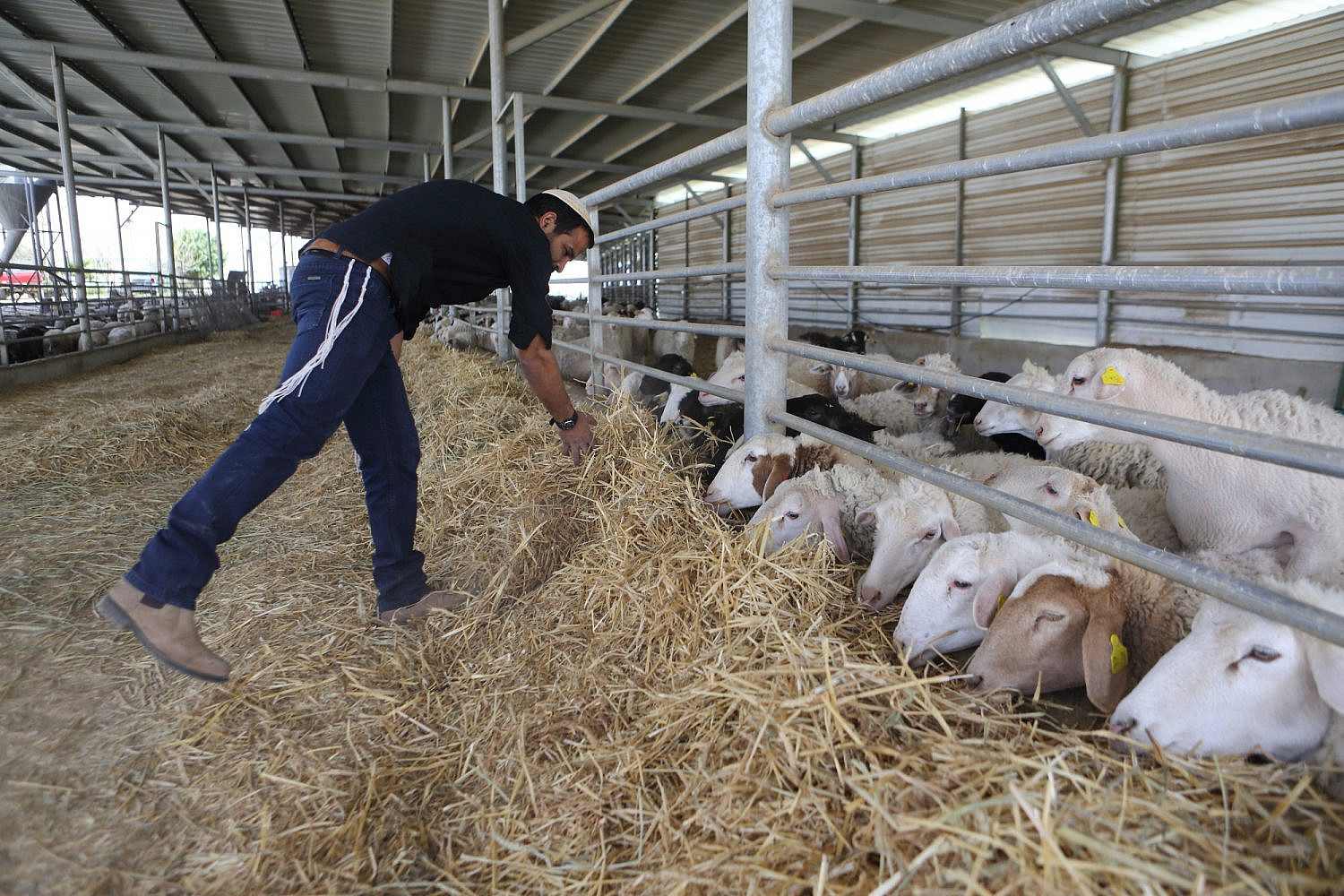 The smell of chicken feces and other strong odors from these settlement farms can linger in our homes for days. The stench, at times, is just too unbearable. Umm Salem, 69, who lives in Umm al-Khair, suffers from asthma and says the smell from the farms makes her symptoms worse — causing increased coughing and shortness of breath. When the smells are at their worst, Umm Salem adds, she cannot even be outside.

Beyond the stench, Palestinian residents say the longest-running impact of the farms are the constant swarms of insects in the area; these insects attack us, particularly in the summer, and they are impossible to escape. The farms also cause constant noise, whether from giant fans that work continuously, or from the trucks routinely loading chickens and taking them to be sold.

Part of our dispossession

In both our communities, there is a clear feeling that it was outrageous for the Israeli occupation to build these farms so close to our villages, without caring at all about the impact on the people living in the area. The agricultural industries in the settlements were approved by the Israeli government, knowing full well that they use modern technology that harms our traditional Palestinian livestock and that they will devour the fields in which our sheep graze.

In Masafer Yatta, our sheep are our livelihood and our main source of survival in Area C, the two-thirds of the West Bank which falls under Israel’s full civil and military control. The occupation prevents us from developing any other economy, yet all its practices have simultaneously made our traditional methods of living impossible. As a result, people in our communities are forced to seek out other sources of livelihood, especially in construction in Israel. 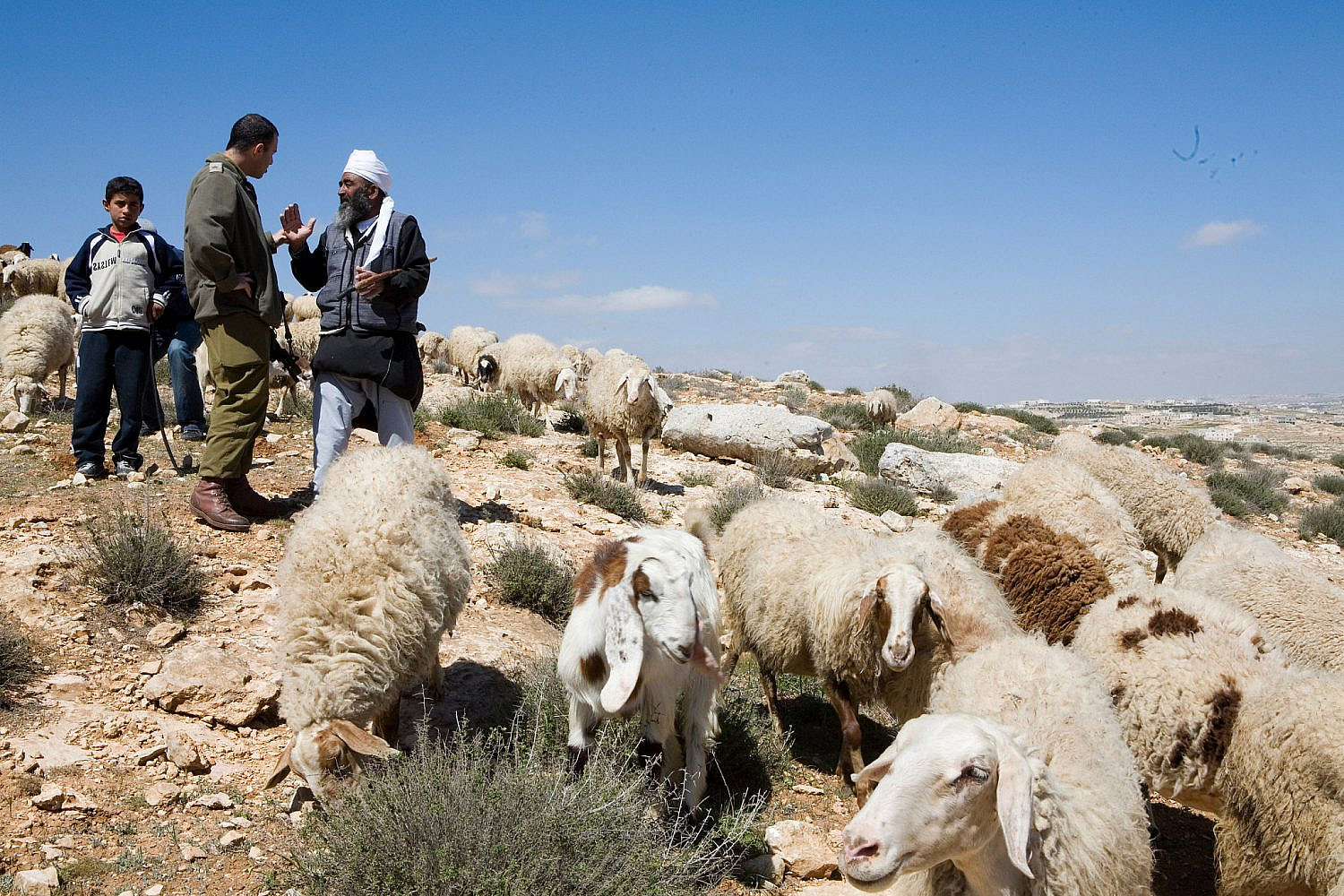 A Palestinian shepherd argues with an Israeli soldier during a solidarity visit for the Bedouin community in Umm-al Khair, South Hebron Hills, March 15, 2008. (Keren Manor/Activestills)

In Umm al-Khair, we find it especially absurd that the chicken farms have better infrastructure than our residents. We suffer from a constant lack of water and are prevented from connecting to the electricity grid; the farms, meanwhile, have constant access to water, and are not only permanently connected to electricity but also have backup generators in case of an emergency. Seeing the electricity lines pass directly over our village is a constant reminder that the animals get rights that we as Palestinians are deliberately denied.

More importantly, we know that building these farms in Masafer Yatta is yet another strategy of the occupation to displace us Palestinians from our homes, and is no less dangerous than its policy of declaring 12 of our villages as falling under Firing Zone 918 — thereby sanctioning our displacement.

Israel is even still using the outdated Ottoman Land Code in the occupied territories to transfer Palestinian pasture into “state land,” which it then leases to settlers in order to establish other kinds of farms.  They are multiple laws and policies, but they all serve one goal: to take over Palestinian land.

International law forbids such forced displacement, whether through direct evictions or by creating conditions that force a person to leave their home. Israel’s policies against us are a clear example of both kinds. The expansion of settlement farms and the crippling of our way of life are not as blatant as when the Israeli army forces people and their possessions onto trucks and throws them out, as it did in Masafer Yatta in 1999. But these other policies are no less a part of the violent dispossession and intentional destruction of our communities.