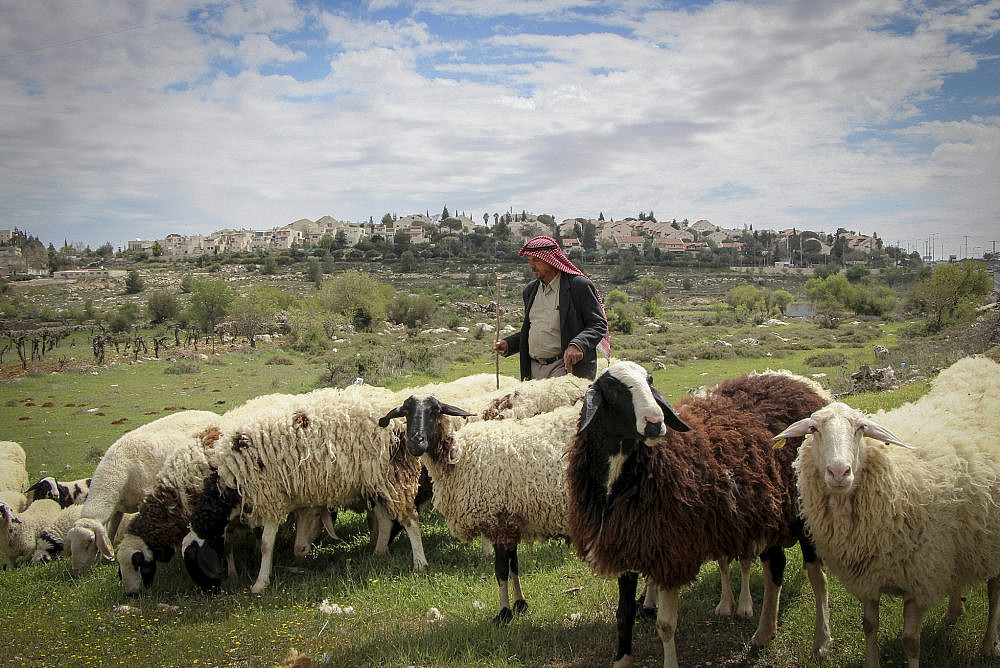 A Palestinian shepherd near the Israeli settlement of Efrat. March 22, 2017. (Gershon Elinson/Flash90)

Through his large living room window, past his neighbors’ rooftops that dominate his view in the village of Artas near Bethlehem, Awad Abu Swai can see the green slope of Jabal Abu Zied. Five years ago, he bought a one-dunam plot of land on the other side of this hill, in the unbuilt area of al-Nahla, hoping to have a place to escape the congestion of his overcrowded village and the neighboring Dheisheh refugee camp.

On the other side of the hill, however, lies the encroaching Israeli settlement of Efrat. Last month, after a 20-year legal battle, the Israeli Civil Administration — the arm of Israel’s military government that governs the 2.8 million Palestinians in the occupied West Bank — gave Efrat the green light to expand its area. In line with this plan, it permitted the building of 7,000 housing units in a new non-contiguous “neighborhood,” called Givat Eitam, on about 1,200 dunams of land near al-Nahla.

Palestinian farmers — some of whom have land registration documents — have been working that land for generations. 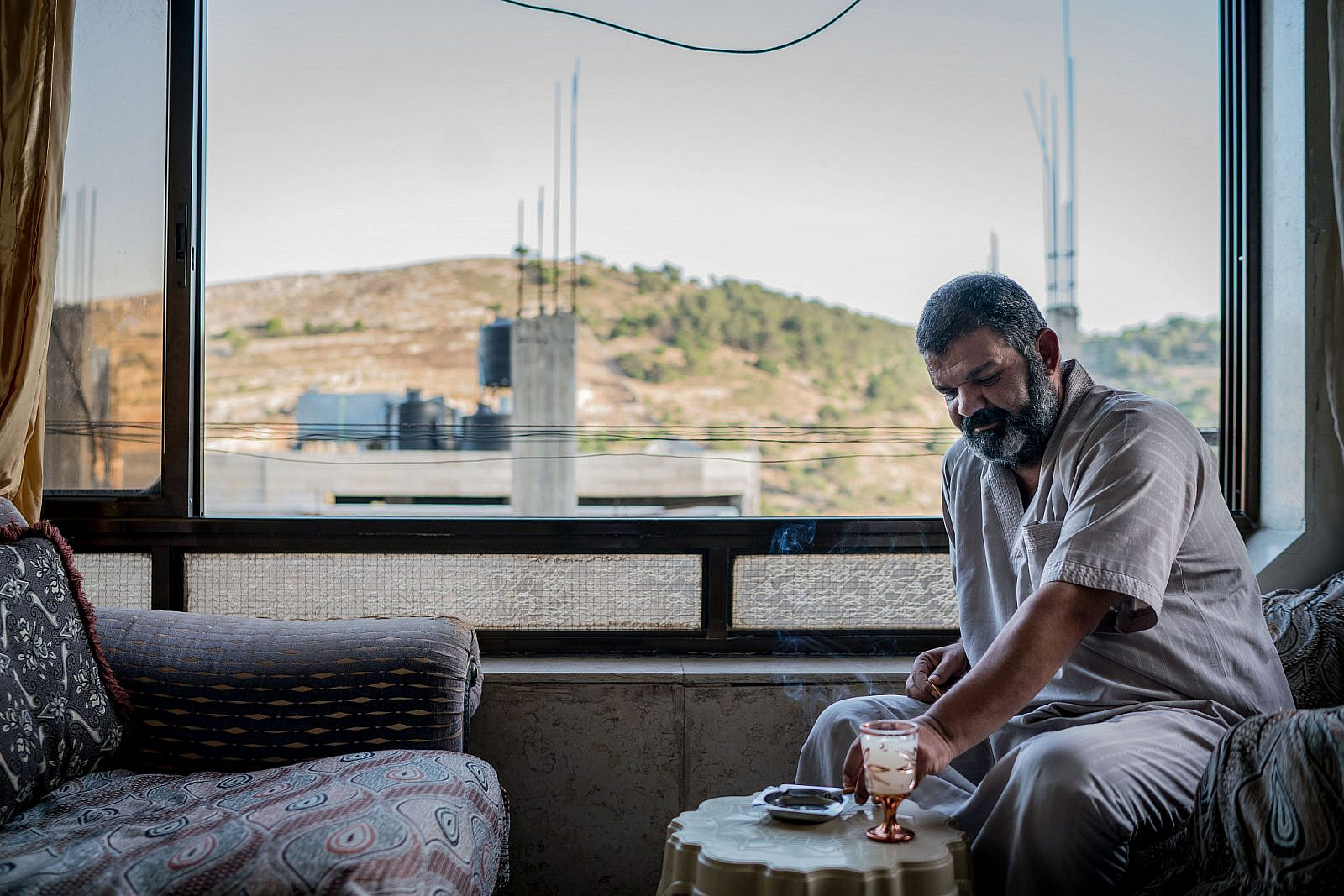 Awad Abu Swai in his home in Artas near Bethlehem in the occupied West Bank. June, 2020. (Samar Hazboun)

“It’s a very nice location,” says Abu Swai, who works as a taxi driver. “Artas is very crowded and people were getting land in (al-Nahla) hoping we can expand. But now we are seeing this will be impossible.”

A local resident in the al-Nahla area declined to be interviewed for this article out of fear of repercussions from Israeli authorities.

In 2004, Israel declared 1,341 dunams in al-Nahla as state land and incorporated it into Efrat’s jurisdiction. The decision, according to the Israeli NGO Peace Now, was based on Israel’s interpretation of the Ottoman Land Code of 1858, which requires that at least 50 percent of property be cultivated for at least 10 years, otherwise it can be claimed as state land.

Israel then annexed another 309 dunams that had been registered in two parcels in 1979 and 1990 under the name of Himnuta, a subsidiary of the Jewish National Fund established in 1938. Although the JNF maintains that its subsidiary is a private company that owns and operates land in accordance with Israeli law, investigative reports and Peace Now assert that Himnuta has effectively served as an arm of the JNF to acquire extensive property in the occupied West Bank including East Jerusalem. 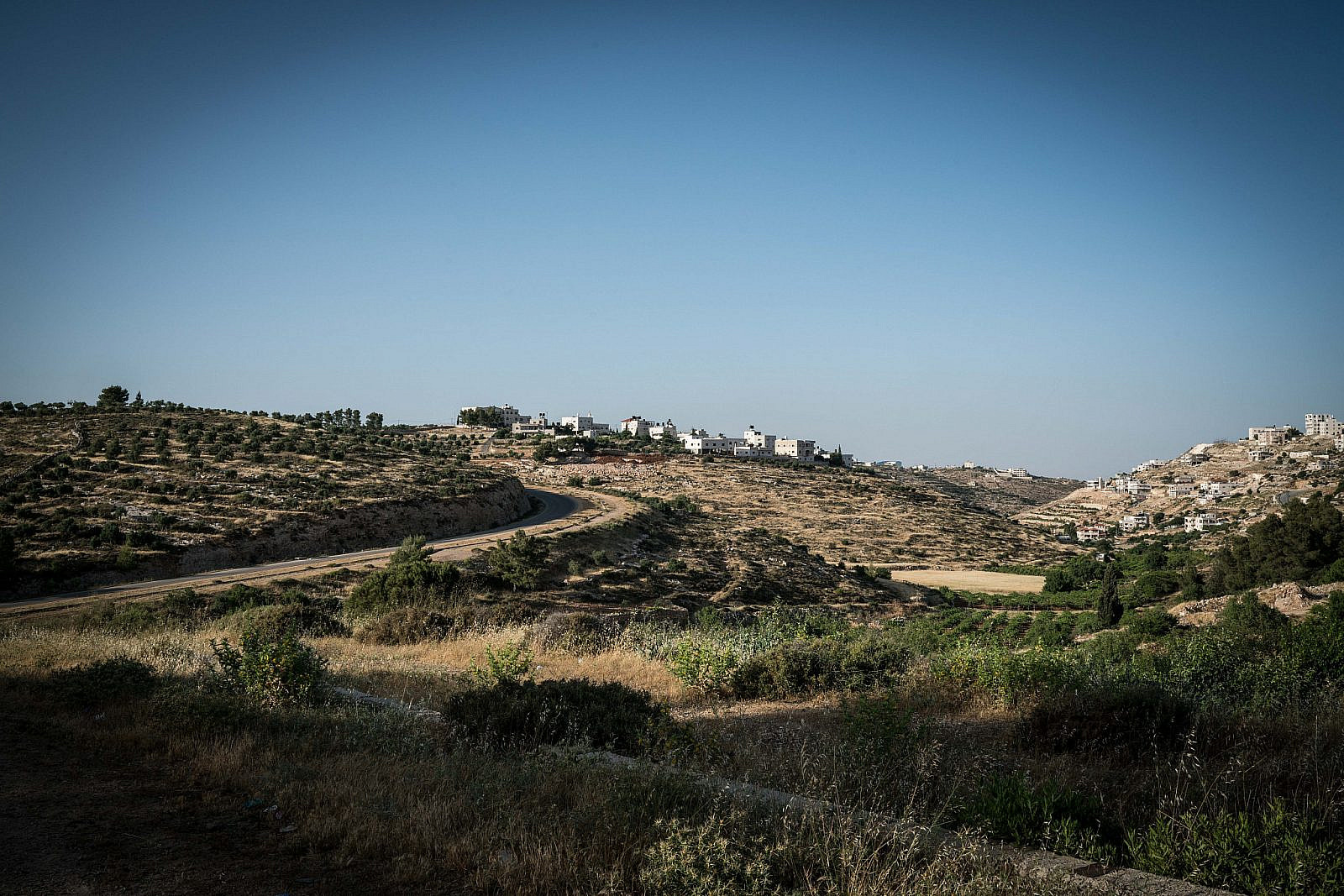 Land around the Israeli settlement of Efrat in the occupied West Bank. June, 2020. (Samar Hazboun)

“What (Israel) did was very disingenuous,” says attorney Sani Khoury, who represented some of the al-Nahla landowners in their first appeals to the Israeli courts against the seizures. “Most of the peasants have large plots of land… and large portions are rocky areas which can’t be cultivated. [Israel] used the fact that they were only cultivating [for example] 30 percent of the land and not 50 percent in order to take it all. It is a huge injustice of the system.”

The last appeal against the settlement construction in al-Nahla was filed in February 2019; over a dozen Palestinian landowners and Peace Now demanded that the Civil Administration’s Custodian of Government and Abandoned Property not allocate the land to the Israeli Housing Ministry, but to Palestinian residents instead. The administration rejected the appeal last month. 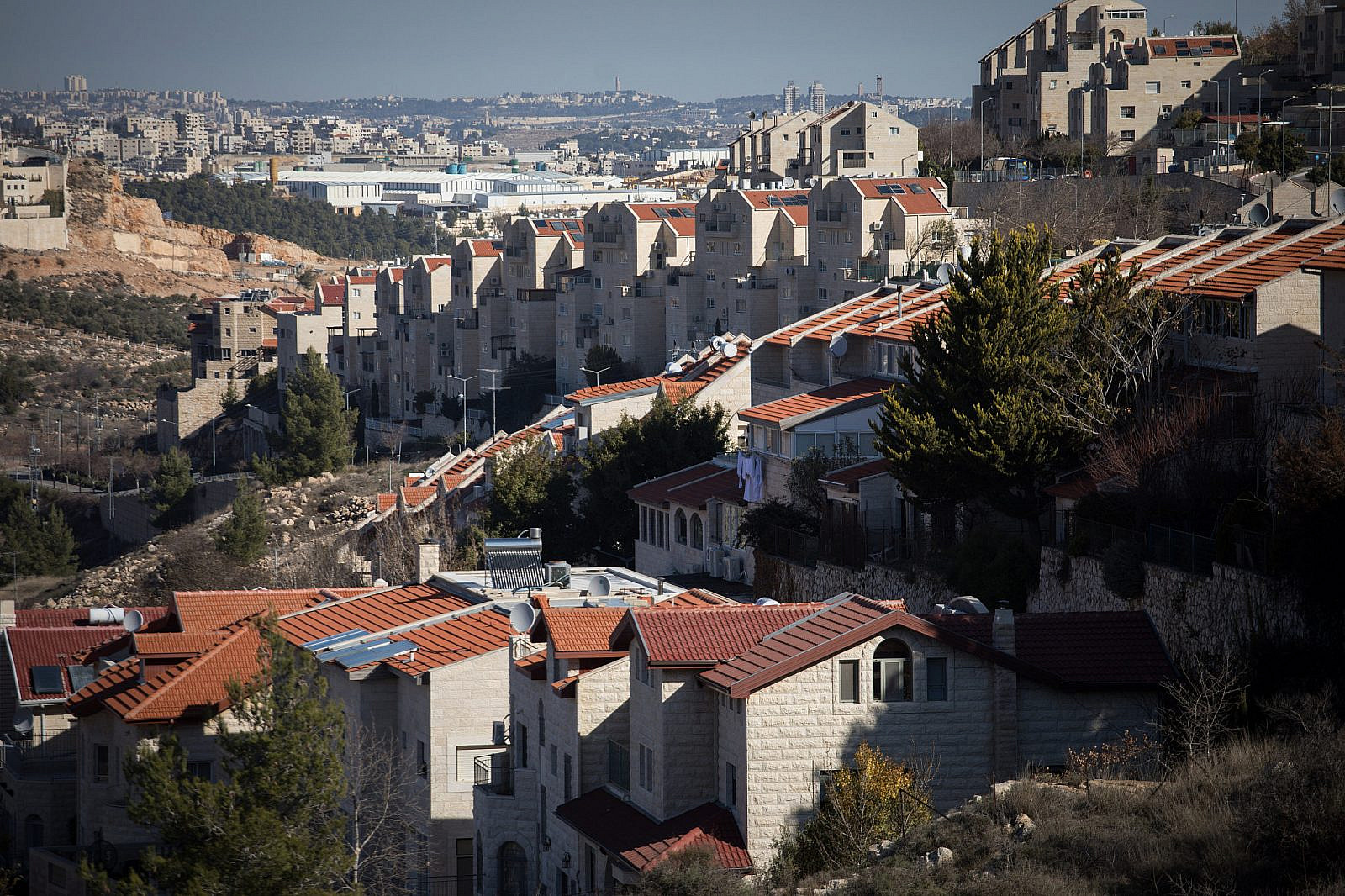 Peace Now has since taken the matter to the Israeli High Court. It argued in its appeal that settlement construction contravenes Israel’s responsibilities to protect the land for the local Palestinian population, in accordance with international law. The NGO highlighted that Israel’s land allocation in the West Bank since 1967 has always been discriminatory, with 99.8 percent of property directed toward Israeli use, which has resulted in a severe lack of land for Palestinian localities to grow and to ease their population densities. The appeal is pending.

Settlement critics are referring to Israel’s plan for al-Nahla as “E2” because of its similarity to the contentious E1 plan in East Jerusalem. E1, if implemented, would create a corridor of 3,500 housing units linking the settlement of Ma’aleh Adumim with Jerusalem, which in turn would sever the geographic connection between the northern and southern West Bank.

Both the E1 and E2 plans, critics warn, would effectively destroy any possibility for the creation of a viable Palestinian state. 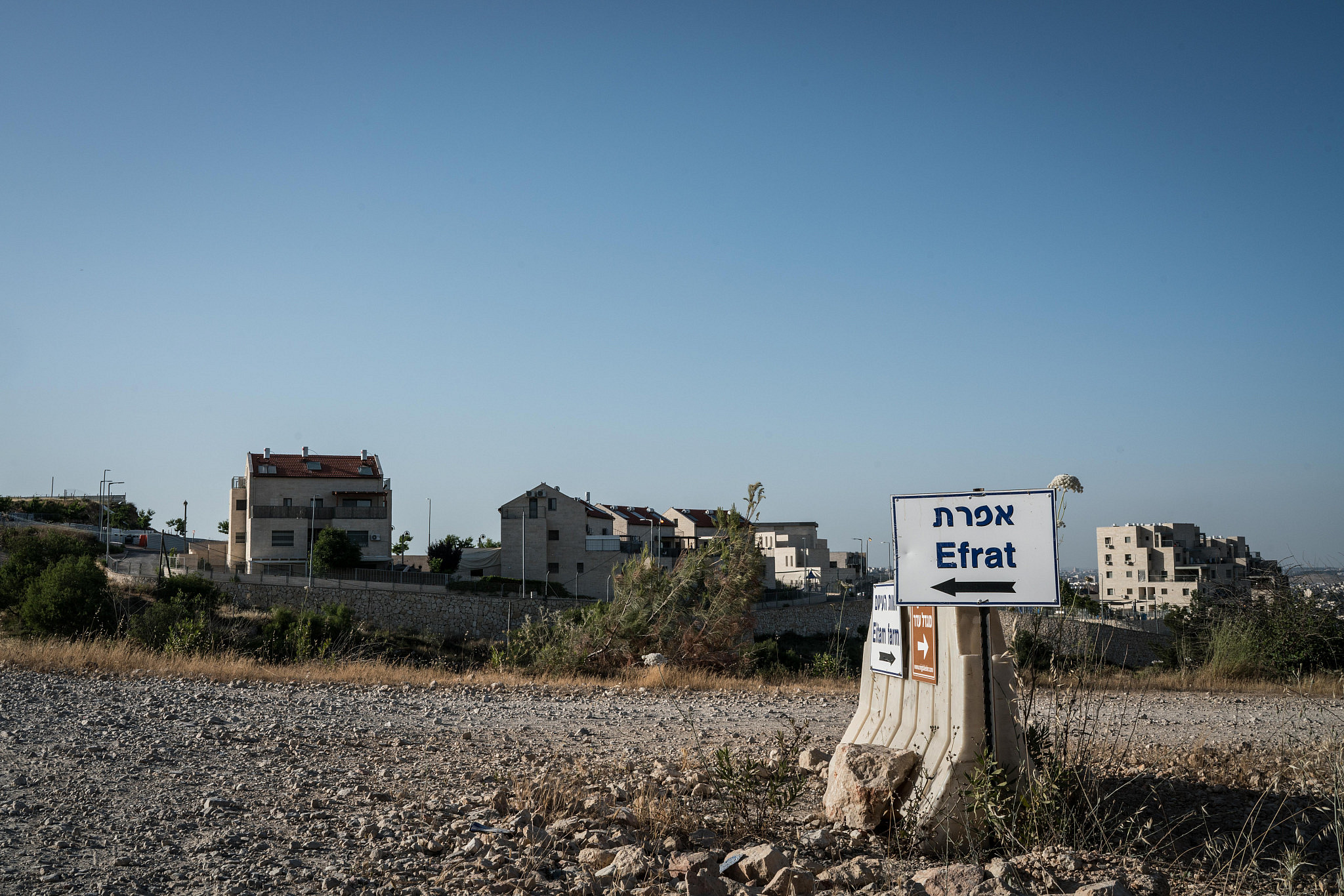 A sign pointing to the Israeli settlement of Efrat in the occupied West Bank. June, 2020. (Samar Hazboun)

Following the announcement of Trump’s “Deal of the Century” in January, Israeli Prime Minister Benjamin Netanyahu reiterated his longstanding pledge to annex large portions of the West Bank, including settlement outposts and the territory of the Jordan Valley. Under the coalition deal reached in April with the Blue and White party, the prime minister can bring the issue of annexation up for cabinet discussion as early as July 1.

However, it is unclear how much, if at all, Netanyahu will be able to advance such a plan. The Trump deal currently faces fierce criticism from settler leaders, who fear that annexation under the U.S. parameters would clear the way for a Palestinian state and impose limits on the expansion of the settlement enterprise. There are also differences within the Israeli government itself over how to implement the proposal.

Along with opposition from Palestinians and left-wing Jewish-Israelis, the annexation plan is also facing international pushback — including from Jordan, which has warned that the Israeli-Jordanian peace agreement could be in jeopardy if Israel proceeds with the move. Some members of Israel’s military ranks have also stated that annexation would undermine Israel’s security interests. 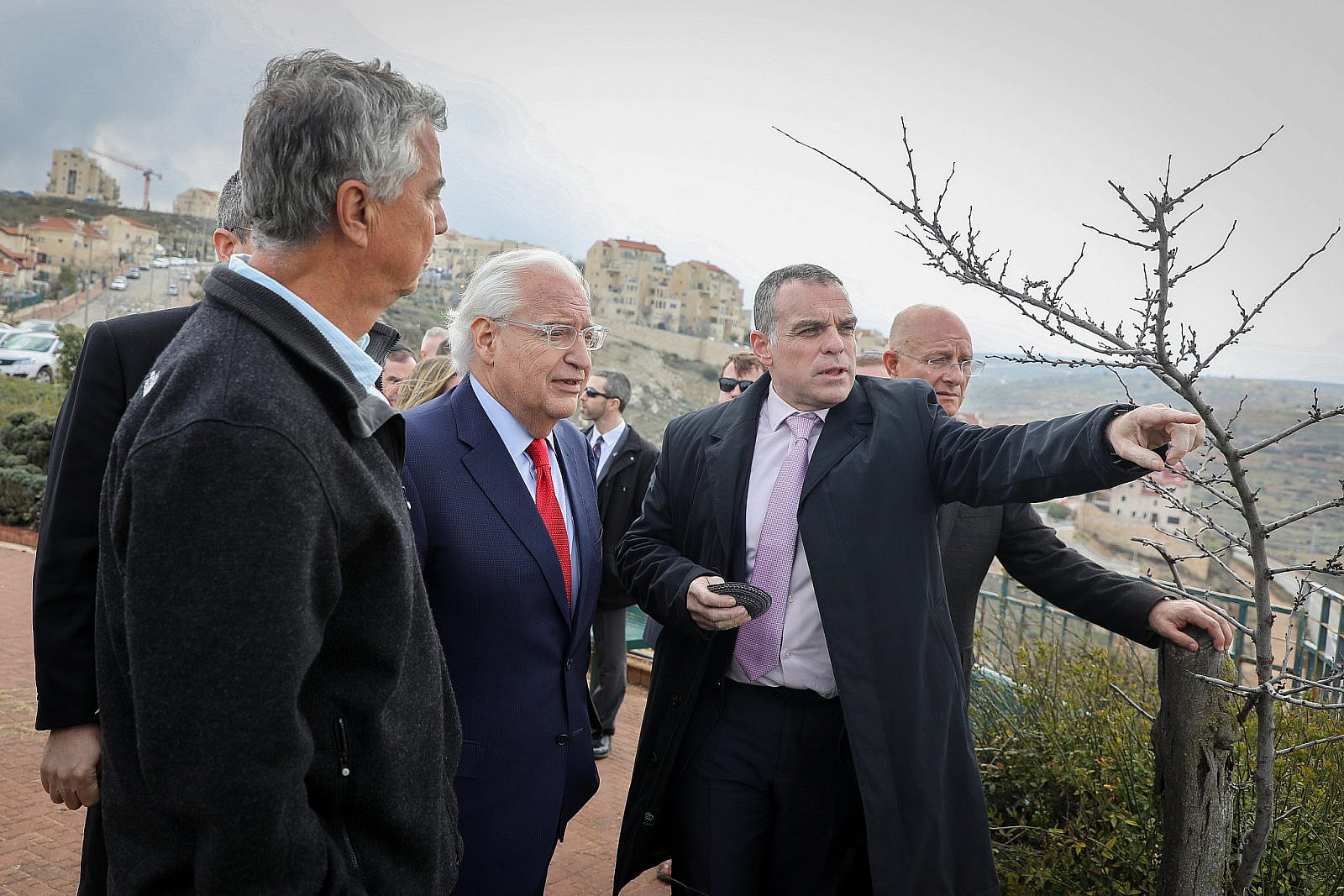 U.S. ambassador to Israel, David Friedman, with Head of Efrat regional council Oded Revivi and heads of local councils in Judea and Samaria during a visit to the settlement of Efrat, in Gush Etzion, February 20, 2020. (Gershon Elinson/Flash90)

Opponents have further warned that annexation would permanently trap Palestinian communities into Bantustan-like enclaves, similar to those created by apartheid South Africa for its Black inhabitants, who were denied citizenship rights while being kept under White rule.

‘You can see how greedy the situation is’

Even as attention focuses on the upcoming annexation plan, the construction of Efrat’s Givat Eitam neighborhood in al-Nahla has already been approved.

If built, it would effectively cut off 14 southern West Bank villages from their natural connection with Bethlehem and further cut off the city from Highway 60, a main road that connects it to the southern West Bank, including with Hebron. It would also prevent Bethlehem’s development southward — the only direction that is not yet blocked by Israeli settlements or infrastructure. 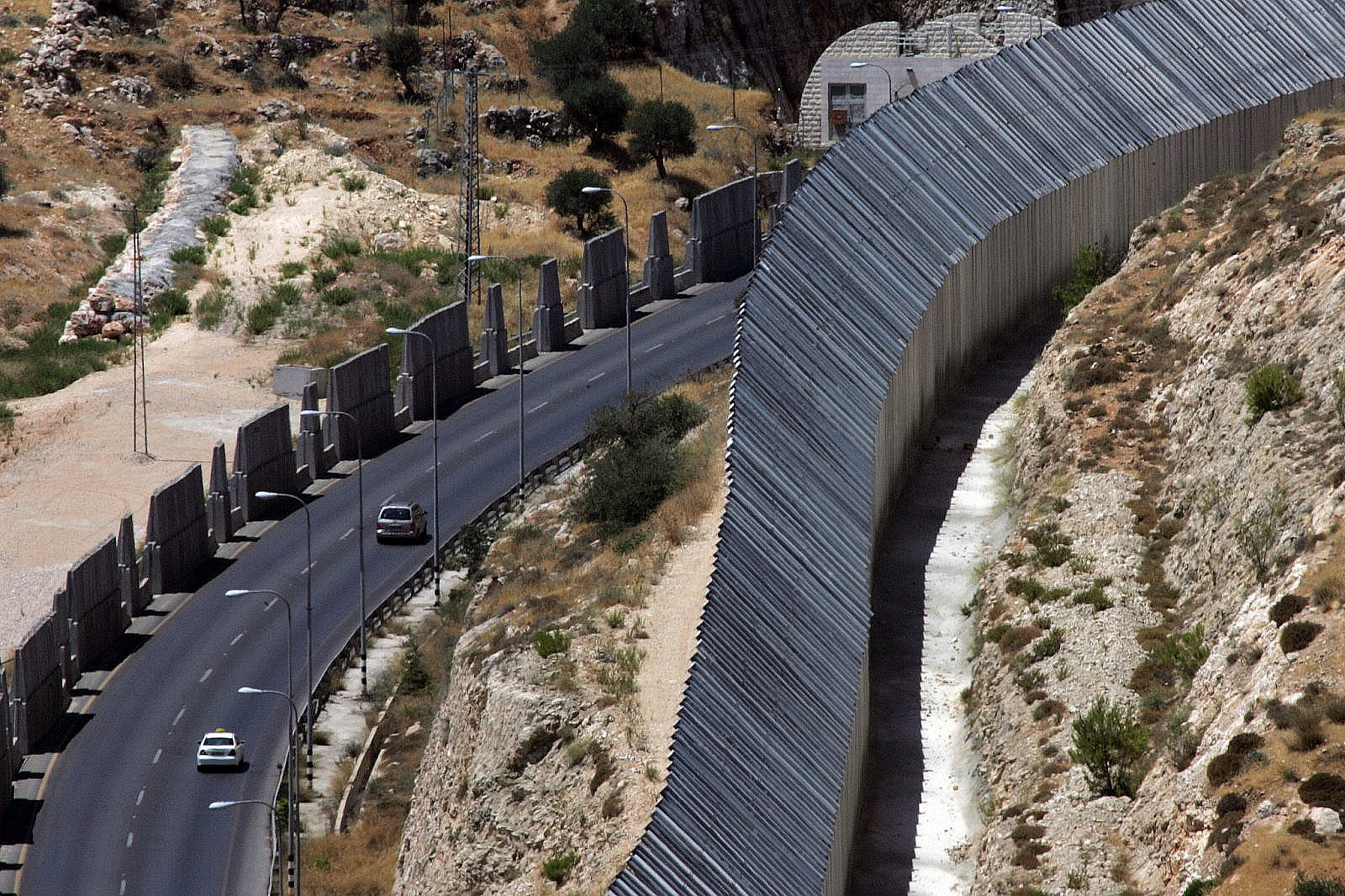 According to Peace Now, the JNF allowed settlers to establish an agricultural farm in al-Nahla even before the area had been officially declared state land— a strategy which has often served as a precursor to establishing settlement housing.

Nadi Faraj, who is from Dheisheh refugee camp and who heads the Committee Against Settlements in al-Nahla, bought land near the area of the Israeli farm along with two of his brothers and two cousins. Yet while Israeli settlers have been permitted to put up structures in their farm, Faraj’s three attempts to build a small cabin on his land were met with Israeli demolition orders. 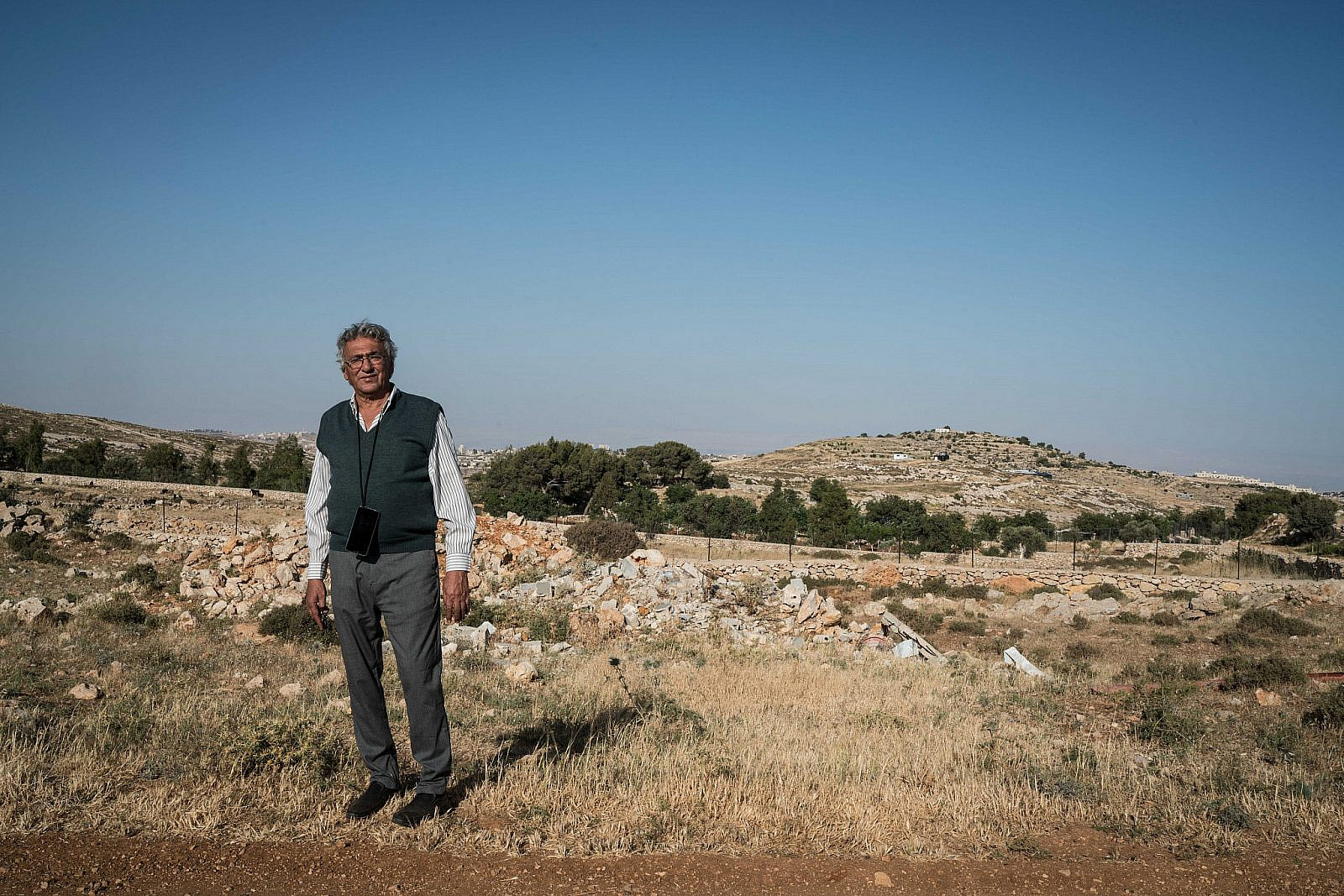 Nadi Faraj, a Palestinian from Dheisheh refugee camp and head of the Committee Against Settlements in al-Nahla. June, 2020. (Samar Hazboun)

“We have lost hope,” says Faraj. “We come here every week, especially in the spring and summer. We come with our children to eat and work.”

Peace Now says that Netanyahu is heavily invested in supporting Efrat’s development in order to make a future evacuation of the settlement, and the establishment of a viable Palestinian state, nearly impossible.

Since 2009, Netanyahu’s four consecutive governments okayed the construction of houses in the former outposts of Givat Hadagan and Givat Hatamar just north of Efrat, which were authorized retroactively and have now become neighborhoods of Efrat. 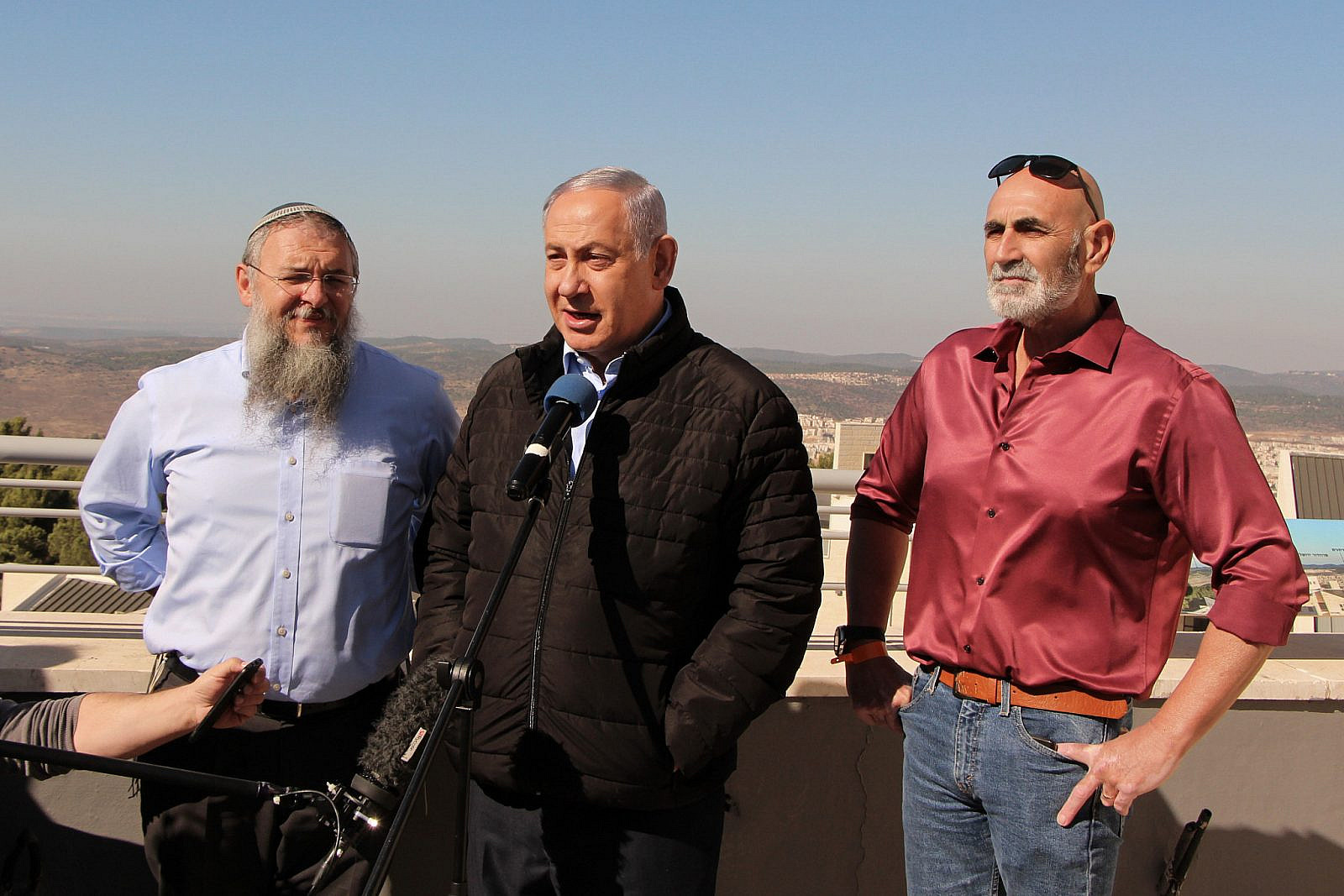 “You can see how greedy the situation is,” says Abu Swai. “You see all the settlers. You don’t know where they all come from, they take all the natural resources, all the beautiful view. You see their life of luxury, while we the local Palestinians are surrounded by military roads and more confiscation of land. [In Artas] there is no space for a public garden for my three-year-old son, but on the other side you see the settlers with pools, private gardens, and public gardens.”

‘They are just filling in the gaps’

Israel’s approval of the new settlement in al-Nahla does not come as a surprise, says Dr. Jad Isaac, general director of the Applied Research Institute-Jerusalem/Society based in Bethlehem.

Israel has been intent on strangling Bethlehem since 1967, he says, surrounding the core Bethlehem areas with strategically located settlements. Now it is aiming to connect the west and east Gush Etzion settlements, turning the Bethlehem area into a large prison. 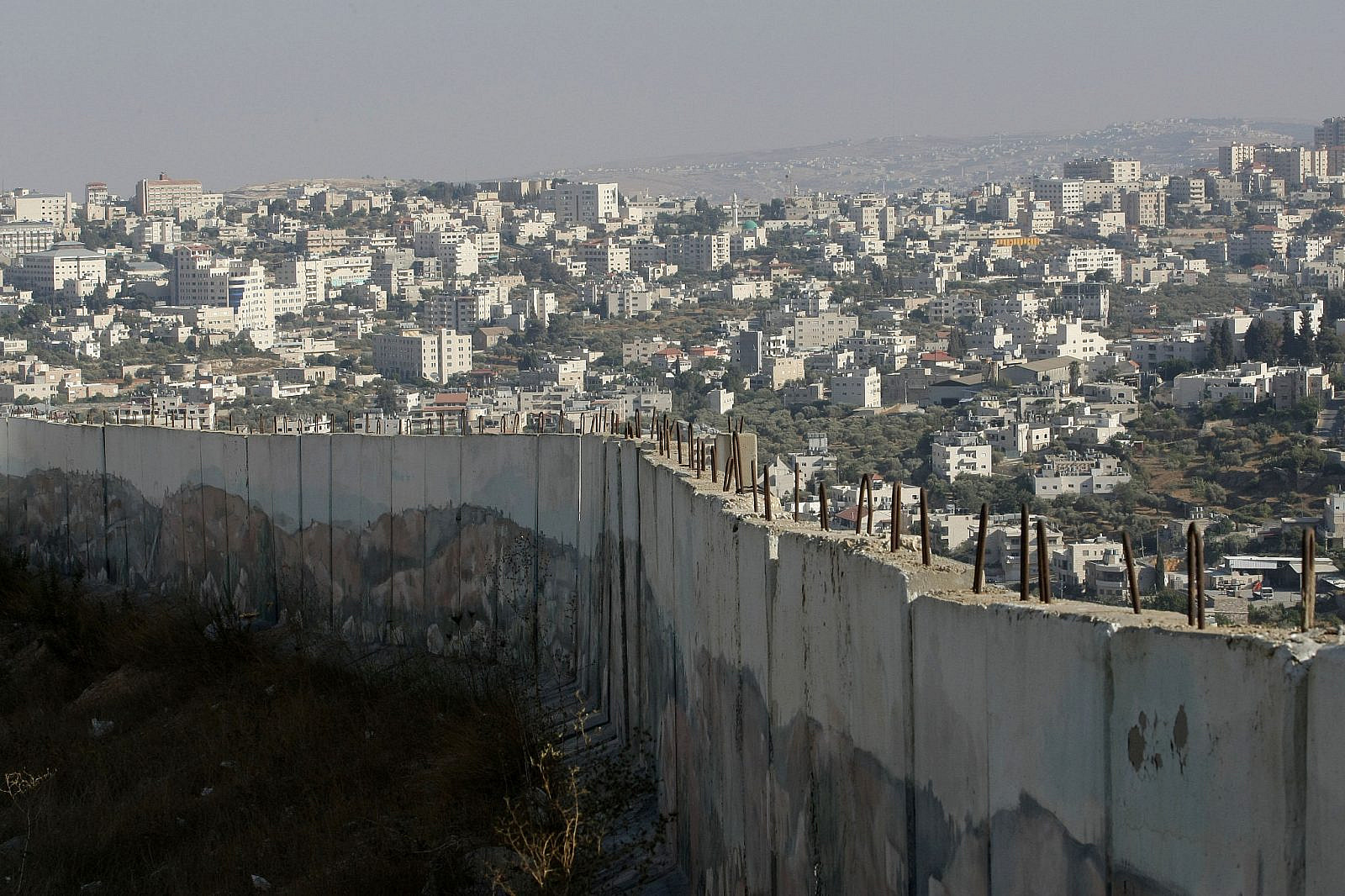 A painted wall at the Jewish settlement of Gilo, with the Palestinian village of Beit Jala, near Bethlehem, in the backdrop. August 12, 2010. (Kobi Gideon/Flash90)

The Har Homa, Gilo, and Har Gilo settlements — considered by Israel to be neighborhoods of Jerusalem — are already built on territories Israel previously annexed, hemming Bethlehem in from the north, with the Givat Hamatos settlement slated to be built in the same area.

According to a Peace Now statement released Monday, the Israeli Housing Ministry announced that bids for housing units at Givat Hamatos would now be open from August 2 to September 7. In addition, the Israeli NGO Ir Amim reported that on May 25, the Jerusalem District Committee gave final approval for the construction of 2,000 units in Har Homa East, adjacent to Givat Hamatos. The plan would connect Har Homa to Gilo and create a contiguous, built-up Israeli area between Bethlehem’s north and East Jerusalem. 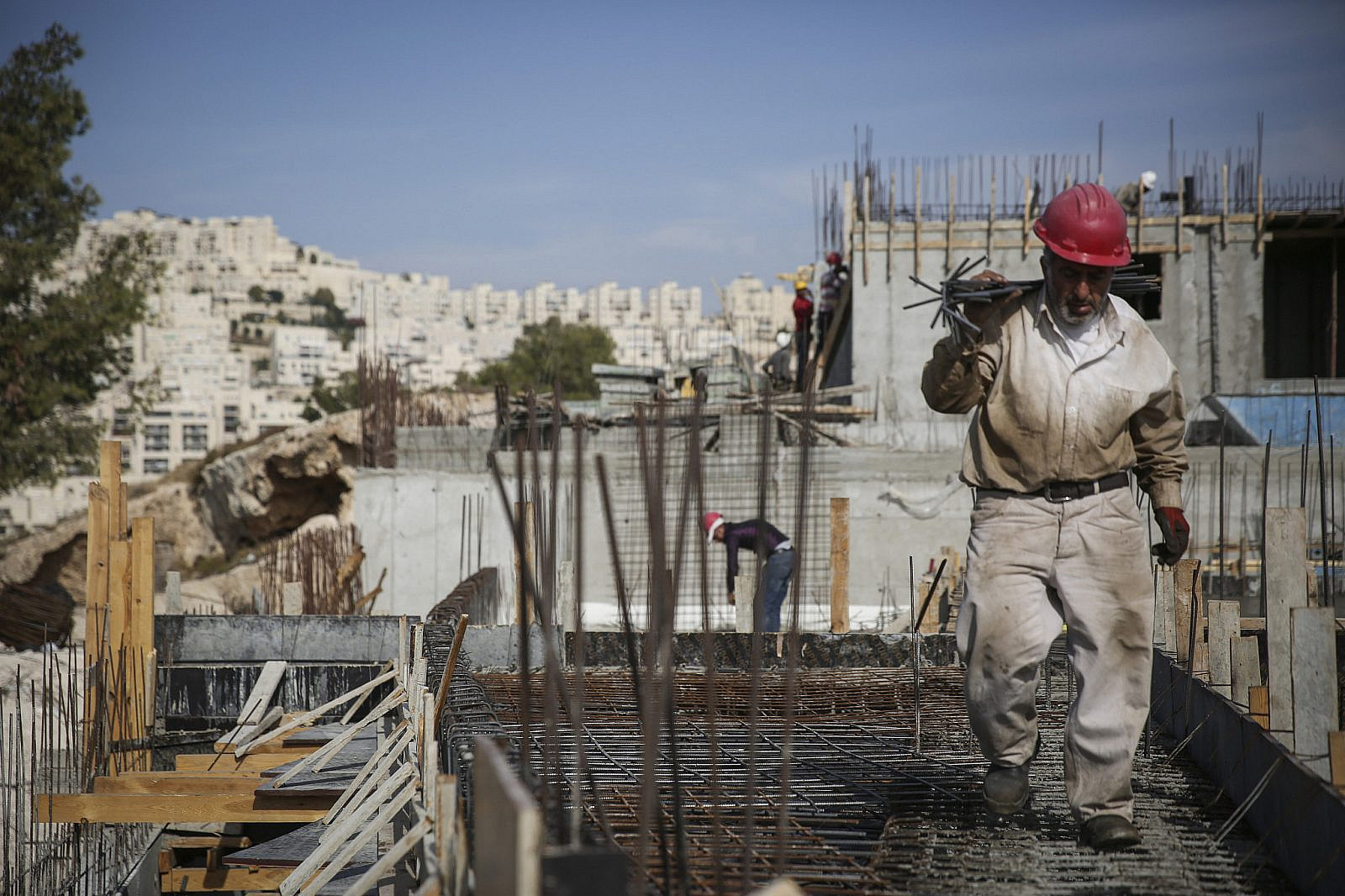 All the while, Bethlehem remains blocked to the east by the Israeli settlements of Tekoa and Nokdim, which further cut off the area from Jerusalem. From the west, Bethlehem is encircled by the Israeli separation wall and the Tunnel Highway connecting Gush Etzion to Jerusalem. The southern area is currently the only open area for the city to expand.

This lack of land for natural expansion has driven Bethlehem’s property prices so high that many people can no longer afford to buy homes, says Isaac of ARIJ. Together with the economic struggle of day-to-day life, which has been exacerbated by the COVID-19 pandemic, the housing crisis has led to an increasing number of people leaving the Bethlehem area for Ramallah, or for a life abroad, he added.

“There has been a slow strangulation of Bethlehem, but it has increased over the past few years since Trump came to power,” says Isaac. “They are just filling in the gaps.”