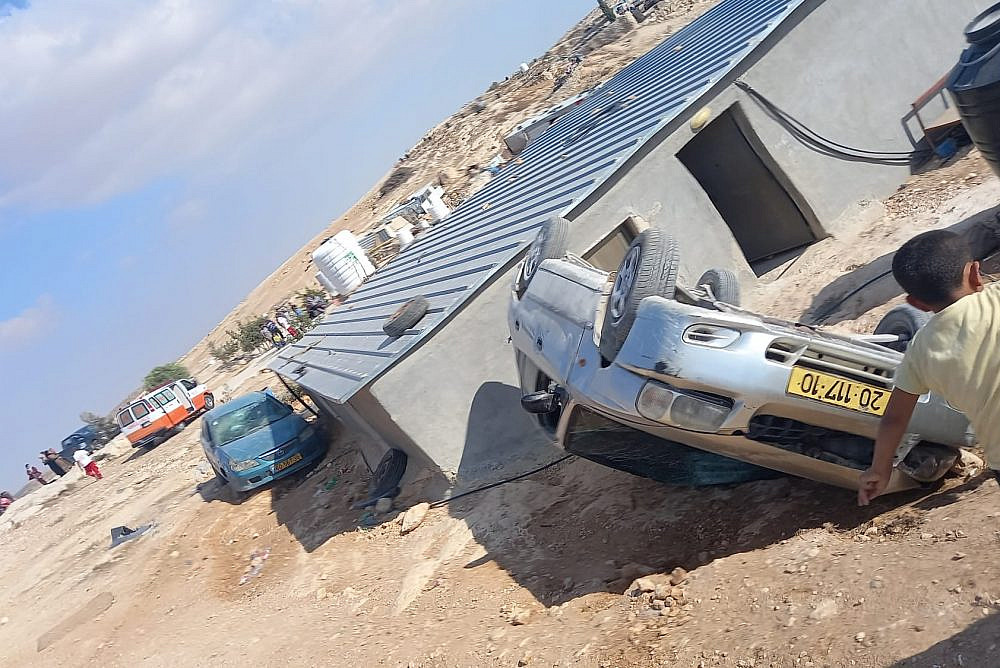 “All of a sudden I heard glass shatter and then all the children screaming from the other room. I ran over there. Muhammad’s head was wounded, he was bleeding on the floor. He is three years old. And the settlers were still outside, all the children were around [Muhammad], crying like I’ve never seen them cry.”

This is how Mariam Hamamdah, 30, described Tuesday’s coordinated assault by dozens of Israeli settlers on the village of Mufagara in the South Hebron Hills, on the final day of the Jewish holiday of Simhat Torah. Muhammad, her nephew, was hit in the head by a stone thrown by the settlers. He was hospitalized in Be’er Sheva’s Soroka Medical Center with a fracture in his skull and internal bleeding in his brain.

The attack on the village began at 1 p.m. after a group of masked settlers assaulted a Palestinian shepherd. They slit the throats of three of his sheep, after which the shepherd fled with two children who were accompanying him, one of whom was his son. Soon after, several dozen more masked settlers arrived armed with handguns, stones, clubs, and sticks. At least 60 Israelis participated in the attack on Mufagara, which has been a target of settler violence before — but never like this.

Mufagara is one of dozens of unrecognized Palestinian villages in the area of Masafer Yatta in the occupied West Bank. Although the village has existed for generations, its residents are not granted building permits by the Israeli authorities. Representatives from the Civil Administration — the arm of Israel’s military government that rules the occupied territories — arrive here regularly to demolish homes and other structures. 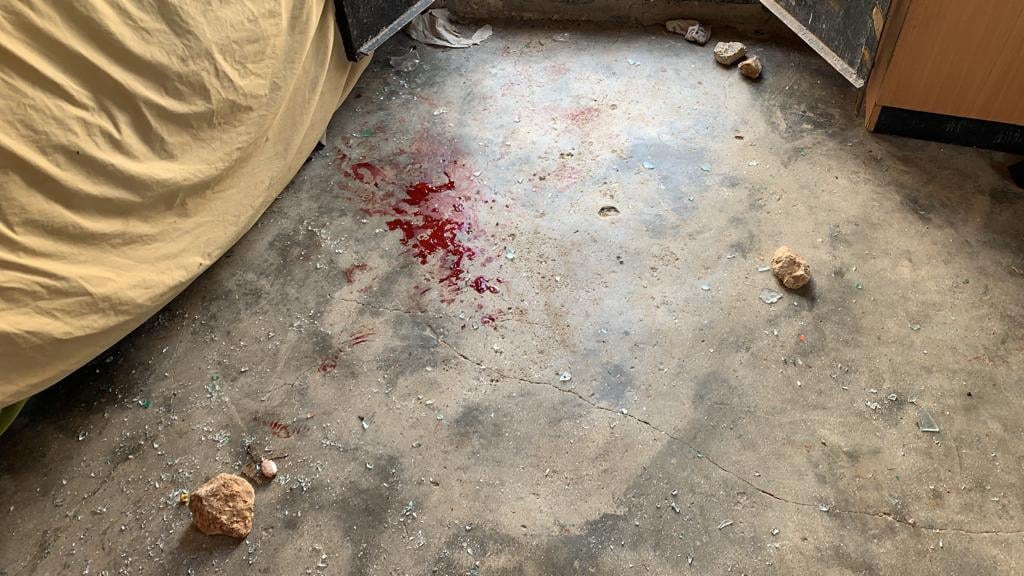 Blood stains on the floor of a home in the Palestinian village of Mufghara in the South Hebron Hills after 60 masked settlers attacked people, homes, and cars, September 28, 2021. (Basil al-Adraa)

According to Mufagara’s residents, the settlers began by throwing stones at their village, then went home to home while cutting water pipes with knives and machetes. Many of the residents fled to the nearby valley for safety. A few of the masked attackers even entered the homes and wreaked havoc inside. Others turned over vehicles belonging to the residents and tried to roll them down into the nearby valley. One settler opened fire on a Palestinian man who was throwing stones at him from inside of his home, but was unharmed.

Israeli soldiers were present during the attack, but instead of stopping the violence, they simply stood behind the masked settlers. The soldiers also fired large amounts of tear gas and rubber bullets at Palestinians who were defending themselves from the attack with stones. Settler-soldier cooperation is nothing new in the West Bank, but over the last few months it has had lethal repercussions for Palestinians.

“I heard a noise, I went outside in my sandals and saw people looking toward the nearby [settlement] outpost of Avigayil,” said Fadel Hamamdah, 45. “I went over to the mosque and saw the settlers attacking a shepherd, a man named Amar. He was with a small child. They beat him mercilessly with stones. He was on his own land in the valley, near the olive trees.”

Fadel describes that at a certain point, settlers drove a green tractor into Mufagara from Havat Ma’on, the outpost built on the other side of the village. “He parked in the center of the village,” Fadel said, “and [the tractor] was full of clubs and machetes, and the settlers had guns. We protected ourselves against the tractor, and the settlers began to attack the village. More and more settlers arrived, all of them masked. The army then began to shoot tear gas and stun grenades at us.”

He continued: “They went home by home. They destroyed the windows in eight houses. They wounded at least five children with stones. It was organized, planned. They split up — five here, 15 there, an unbelievable number of settlers. They destroyed the cars completely. Families were in their homes during the attack.” The windows of Fadel’s own home were completely shattered by stones.

Hadra Hamamdah, Fadel’s wife, described how she saw the settlers standing by the mosque, close to their homes. “They began throwing stones at us. I screamed, ‘you’re attacking children, you’re destroying our homes!’ This is the first time I’ve seen this kind of attack. In the past, [settlers] came here, but not in these numbers, not with such ease.

“My son Ahmad’s eyes were full of tears from the tear gas, which the soldiers threw on the residents who tried to defend themselves. My neighbor, a pregnant woman, left one of the homes and fell. We need volunteers who will sleep here with us. My children are afraid to fall asleep.”

Mariam, meanwhile, was in her garden when she heard the masked settlers arriving from Avigayil. “I put all the children in a small room — about 20 kids, one after another. I told them not to worry, and locked the door,” she said.

“I remembered that there were children sleeping in the next room. And I heard the settlers outside, smashing cars, and my house being hit by stones. I opened the door and ran like mad to the other room. Two children were screaming there. I held them in my arms.”

One of the rocks hit her three-year-old nephew Muhammad, who was in the next room. “I picked him up and ran to the soldiers, who were standing a few hundred meters from there,” Mariam recounted. “They told me to go to the ambulance, but I said that I was afraid, since there were settlers next to it.” 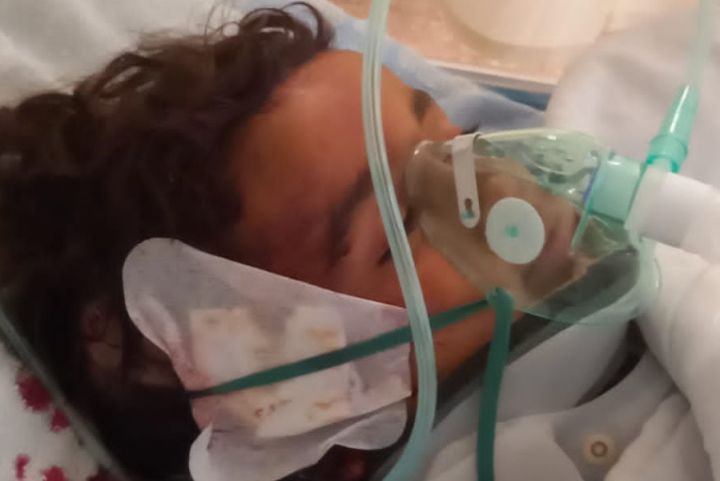 Three-year-old Muhammad Hamamdah seen in Soroka Medical Center in Be’er Sheva after being hit in the head by a stone thrown by a settler during an attack on the Palestinian village of Mufagara, in the South Hebron Hills, September 28, 2021. (Basil al-Adraa)

Muhammad remains in Soroka, and is slated to be transferred to a hospital in the West Bank for further treatment. He is currently in stable condition.

As Mariam described what had happened, her son Qusay, also three years old, was screaming in her arms. He too had been hit by a stone that day. The wailing of children could be heard in every home in Mufagara, even though the attack happened hours earlier.

“I am 45, I was born here, and I’ve never seen anything like this,” said Mahmoud Hamamdah, another resident. “Settlers entering our homes while we’re in the valley and another group of settlers attacking us with stones. There has never been such an attack with such an enormous number [of settlers].”

For Mahmoud, the assault serves a clear purpose. “The settlers want to create territorial contiguity between Avigayil and Havat Ma’on, with us in the middle. That is their goal now: to use violence to force us to leave. They are always taking over more land and attacking us. It’s like the army, which destroys our homes. [They do] everything so that we leave.” 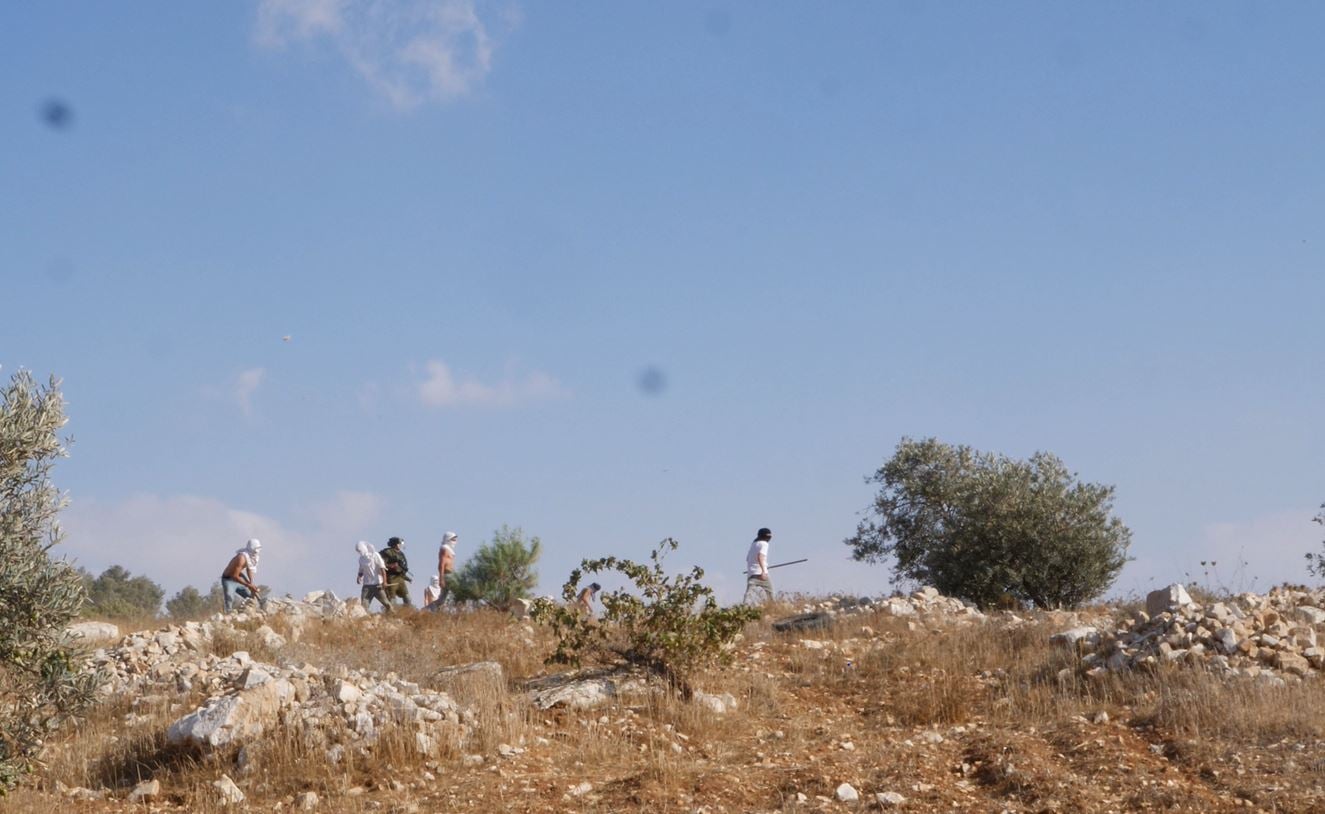 Israeli settlers have established seven new outposts in the South Hebron Hills over the past several, calling them “shepherds’ farms.” Settlers have built a total of around 54 new outposts across the West Bank in the last five years, all of them illegal according to Israeli law itself as well as international law. The settlement farms receive thousands of dunam of land, which have been expropriated from Palestinians by the Israeli state.

Several hundred Israeli settlers operate these farms, and many of them hop from farm to farm voluntarily. They communicate and coordinate via WhatsApp groups, and in preparation for the Sukkot holiday, they asked people to come to the farms to volunteer. It is not clear whether there is a connection between the recent call for volunteers and the attack that took place on Tuesday.

Settlers regularly come out of these outposts in order to attack Palestinians in an attempt to coerce the latter off their land. We have witnessed and documented dozens of such cases, which appear to have escalated and grown more dangerous with every passing year.