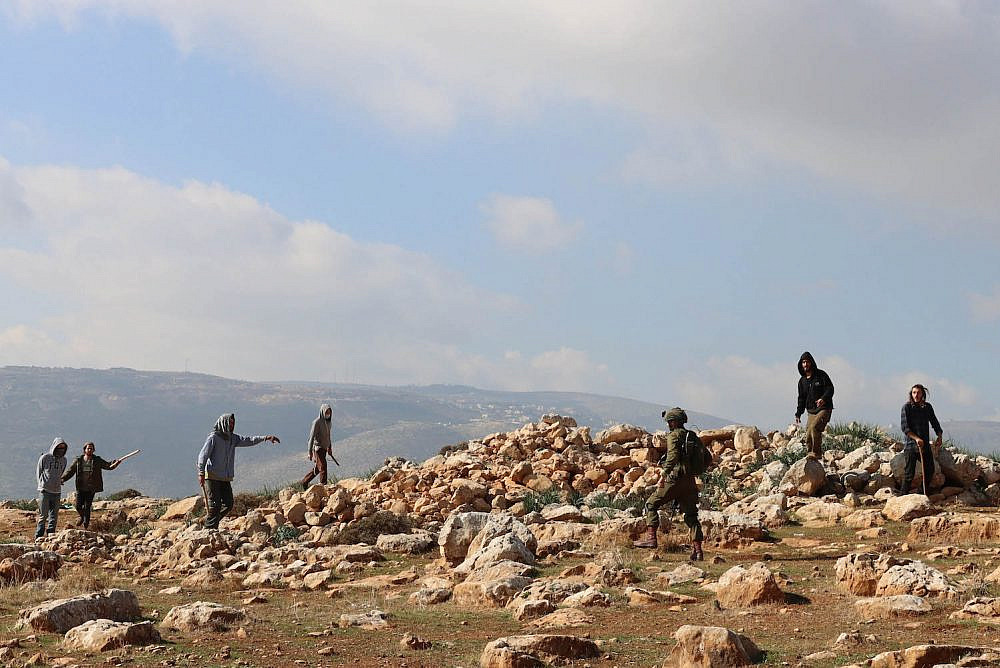 Israeli settlers and soldiers seen after a settler opened fire at a group of nearby Palestinian protesters, near al-Mughayyer, West Bank, December 18, 2020. (Sharona Weiss/Activestills.org)

An Israeli settler opened fire at a group of Palestinian and Israeli protesters on Friday during a demonstration against an unauthorized outpost near Ramallah, in the occupied West Bank. The soldiers that arrived at the scene did not detain the settler, but rather demanded the protesters leave the area. No one was injured.

The incident took place early on Dec. 18, when 30 protesters arrived on a hill near the outpost, where they have protested every Friday for the past several weeks. As the protesters reached the hill, several Israeli settlers drove up in a car, got out and walked toward them, at which point one of the settlers fired a number of direct shots from his pistol just meters from the protest.

Soldiers who arrived at the scene about a minute after the shooting did not detain the shooter; they instead hurried the Palestinians away from the scene, threatening them with arrests should they refuse the soldiers’ orders. A video of the incident shows protesters and journalists fleeing the scene for fear of their lives.

The incident took place in the area near the Allon Road, a highway the crosses the West Bank from north to south, not far from the Palestinian village of al-Mughayyer, where soldiers shot and killed 15-year-old Ali Abu Aliya two weeks ago. The IDF claimed Abu Aliya was shot for endangering Israeli drivers on the Allon Road, but according to eyewitnesses, the teenager was nowhere near the road when he was shot.

The weekly protests were renewed after the outpost moved to a new location east of the Allon Road. On Friday, the demonstrators managed for the first time to reach the area of the Palestinian community Ras a-Yatan, and from there advance on foot toward the outpost.

According to the IDF Spokesperson’s Unit, the soldiers were not in the area at the time of Friday’s shooting, but the video of the incident shows the soldiers showing up a minute after the settler opened fire.

In additional documentation from the incident, the protesters can be heard demanding that the soldiers arrest the shooter, but instead the soldiers threaten to arrest the Palestinians who threw stones at the settler.

During the incident, two settlers arrived with attack dogs and others came with batons, and ran in the direction of the protest. The soldiers tried to prevent them from approaching the Palestinian protesters, but did not remove them from the scene or detain them. One of the soldiers was seen aiming his weapon at the protesters.

By the end of the incident, there were about 20 settlers in the area — some of them masked — standing comfortably next to the soldiers and speaking to one another. According to eyewitnesses, and as can be seen in the videos, most of the soldiers who arrived at the scene stood in front of the Palestinians protesters rather than the settlers who were armed with weapons, batons, and assault dogs. 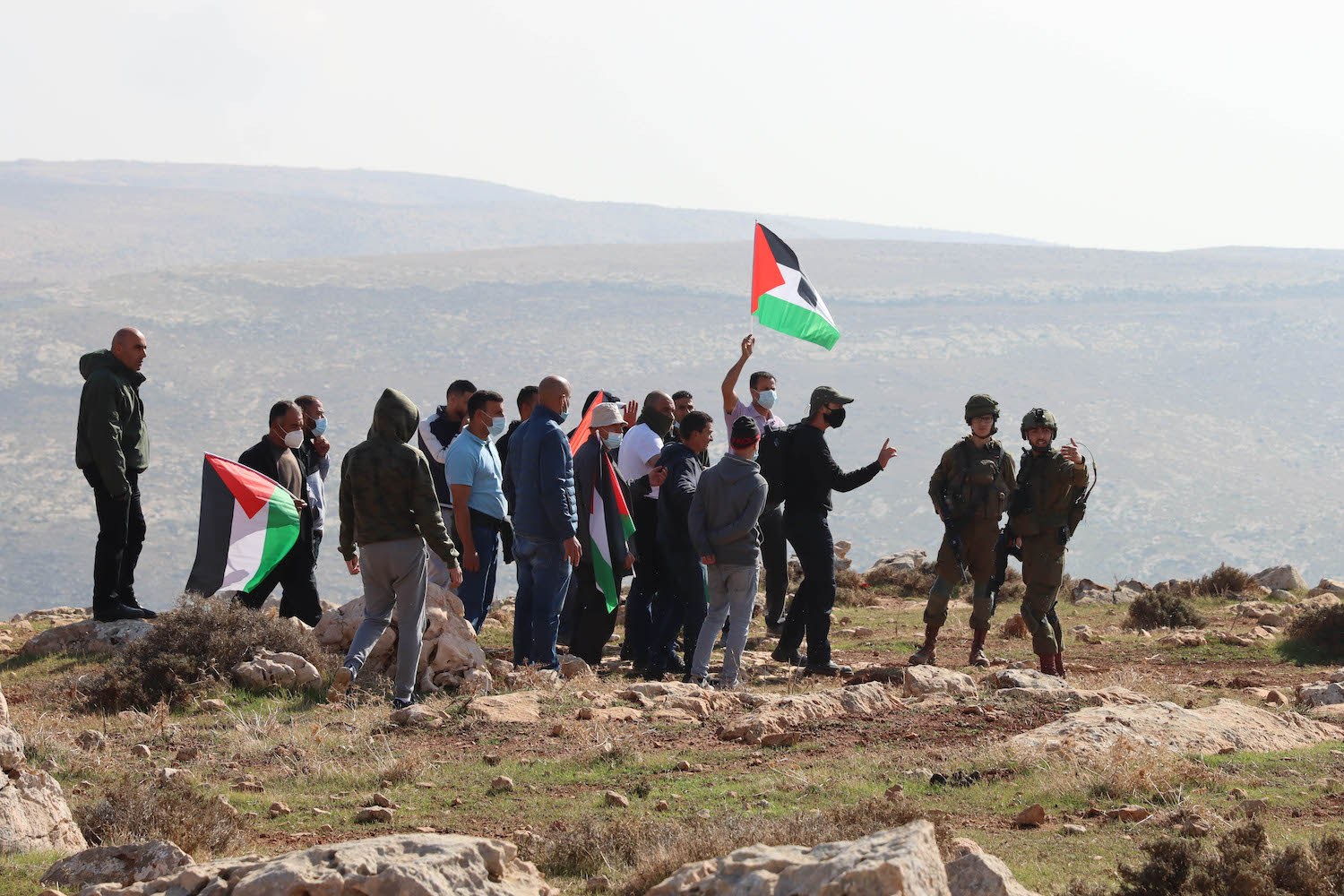 Israeli soldiers try to disperse Palestinians as they protest against a new outpost near the village of al-Mughayyer, in the occupied West Bank, December 18, 2020. (Sharona Weiss/Activestills.org)

“They arrived in two pick-up trucks from the outpost when they saw us coming down from the hill,” one eyewitness said. “They got out of the vans with batons and started approaching us. The young Palestinians tried to keep them away by throwing stones, then one of the settlers pulled out a gun and fired in our direction from a distance of 20 or 30 meters.”

Several protesters confirmed that the soldiers did not detain the settler who had opened fire. “It was very dangerous,” said Palestinian activist Abdullah Abu Rahmeh, who was at the demonstration. “It’s just unbelievable. They don’t act like humans. They can shoot and attack regardless of what we do. All we did was protest and did not resort to any violence.”

“We asked the soldiers to stop the shooter and the settlers who came with dogs, but they fired tear gas at us and tried to force us to leave,” Abu Rahmeh continued. “They did not stop the settler who shot at us, even though we pointed him out. If any [Palestinian] tries to throw stones, they stop him immediately. But a settler who opens fire? They don’t do anything. It is a very big problem.”

The Samaria and Judea Police Department has yet to announce whether it has begun investigating the incident or made any arrests. The army and the police rush to provide updates to the media in cases in which Palestinians open fire at Israeli civilians or soldiers — even when there are no casualties.