Chapter four in the nighttime journey is a tale of two parties. 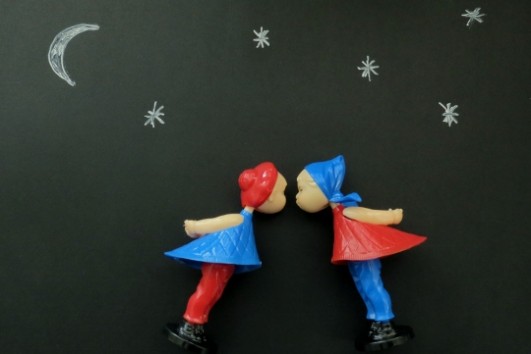 If you think the nights I skip in this chronicle are uneventful, think again fast. On Wednesday I was rushed to the airport with an immigration scandal. A young American who flew in to intern with a company for which I work was interrogated on arrival and then deported. The reason remained withheld but we suspected political bias. This is hardly an unusual occurrence these days.

The intern handed her interrogators the number of the company head: a leader in alternative tourism, a National Geographic Explorer, a Ted Fellow, a Palestinian. The interrogators questioned her at length about him and the tours we give, which happen to be dual-narrative and deal with political issues. They then put her on the first plane home. My boss was never told of her deportation and was denied the right to speak to her. I, being of privileged name and accent, was granted both truth and phone call, yet even I could not overturn the decree.

I returned home, couldn’t sleep and surfed the web. I read that a prominent Israeli community leader called for Jews to burn churches in the holy land,  I saw footage of a Bedouin village being demolished by authorities, who left its residents roofless in the desert and carted away their water tanks. The following morning I learned that a state budget was passed over night. There was no public debate. We were too busy bandaging wounds.

This was not helpful. I needed hope. I needed rest. I needed a good night out.

I had just the friend for such a night: a friend from New Zealand. My previous series published on +972 Magazine was the Israel Palestine Lorde Diaries. It revolved around a tribute to my favorite star musician, who happens to be a Kiwi. One of Lorde’s compatriots read it and told another, who told another, who got in touch. On Thursday night I made plans to meet up with not one but two New Zealanders. I figured some cool mist from the south seas could do me good.

In rolled up to Jerusalem and went to see Kate, a young journalist who reports for major news sources Kiwi and otherwise. The night offered much entertainment. The city of Bethlehem was to host a street fair. Later, the Israel Museum offered a popular annual all-night happening known as “Contact Point.” To attend both events, we would have to cross the separation barrier twice. As Kate was to drive, I reminded her that Israeli law bans me from visiting Bethlehem, and asked if that bothered her. It did not. She even knew the secret way to smuggle us through the barrier without running into a “wrong” checkpoint.

By 9:00 p.m. we have arrived. In Manger Square, a few men were trying to make Chinese lanterns take flight. The wind was too strong and the lanterns kept flying dangerously into their small audience. We went by the Church of Nativity but nothing was cooking there. The West Bank portion of the evening did not look promising, but then we turned down the city’s historical Star Street and were swept up by a river of happy souls.

It was sensational. Stalls lined the street, offering coffee and beer, kebab wraps and labne cheese, decorated ostrich eggs and ceramics bearing the likenesses of Hugo Chavez, Fairouz, Palestinian author Ghassan Kanafani and Hezbollah’s Hassan Nasrallah. All the doors on Star Street were open, revealing at least two pop up galleries and one surprisingly sweet chapel. Hundreds gathered at the various stages. On one stood a Japanese musician and sang in Arabic. On another, an American played a traditional Jewish tune. He sang:

The “salom” was clearly the politically correct variant of a familiar greeting. Here was a surprise that warranted a toast. We got two cups of Shepherds beer on tap. I was unfamiliar with the brand and Kate taught me that it is Palestine’s newest micro-brew, crafted in the town of Bir Zeit. It was excellent. I sipped and marveled at “Bethlehem Live” and especially its crowds. They were diverse in every sense: gender, age, attire. The one common denominator was the lovely mood.

This was the kind of scene where we could stay all night, but another New Zealander awaited us. Over the summer, Wellingtonian John volunteered as an English teacher at Aida refugee camp. He was to head home on Friday from Jordan, and besides being emotional about the farewells, was worried about interrogation at the border. Should he tell of his volunteering, he may be held for hours. Any Westerner who comes in touch with Palestinians, be they internationally recognized peacemakers or six year olds, will be treated with suspicion by Israel. Lying could make things worse. We sat in Manger Square brainstorming a plan of action. There was no perfect one.

Border interrogation… I pictured the poor intern and heard again her voice, exhausted after hours in custody. Behind her were a burned baby cot and a man waving a knife. A week has passed since the night of violence. Dark thoughts were returning. It was time to get back on the move.

We drove through quiet Daheishe and Al-Khader, joined Route 60, which is used by settlers, and drove into Jerusalem through the relaxed checkpoint reserved for them. Within 20 minutes we were at party number two.

Each year, as part of Jerusalem’s “Season of Culture”, the Israel Museum invites artists to interact with its collections or temporary shows. These are artists who would typically not perform at a museum: dance troupes, DJs, performance artists, musicians, filmmakers and poets. The museum is spectacular to begin with. “My ex used to say it’s better than the Louvre,” Kate tells me.

At half past midnight, with all of West Jerusalem and half of Tel Aviv buzzing through the galleries and sculpture garden, it was so much better than the Louvre. For one: I never bump into so many people I love at the Louvre. but there were other people I loved and couldn’t get off my mind.  They walked with us down Star Street an hour earlier, only 5 percent hold permits that allow them to pass through the barrier. The two parties were taking place less than 10 miles apart. A wall stood between them, eight meters high, with soldiers armed to the teeth. This was insane. This was insanely idiotic.

We walked out to the promenade that links the museum’s pavilions, and were suddenly surrounded by people dancing in silence. It was a headphones party. Each headphone offered two channels to choose from: one of trashy Western pop, one of Mizrahi and Arabic music. We alternated between them, grooving with other friends who popped up in the crowd. Here was my buddy Daniel. A week earlier the two of us met at Pride, chatting with each other just as people began screaming and running.

At one point the Western pop DJ picked an Arabic tune and for a spell both channels were at harmony with the region. Bethlehem sang a shy “Salom.” West Jerusalem answered with “Ya Habibi.” The people, as always, seemed perfectly ripe for peace, equality and freedom that our leaders tell us are impossible. This was such a good night, but it also made everything seem all the more absurd: the wall, the cot, the knife, the black stamp in the passport, the news that tomorrow will inevitably bring.