On its next to last night, the journey leads away from the cities and, in a way, to another continent. 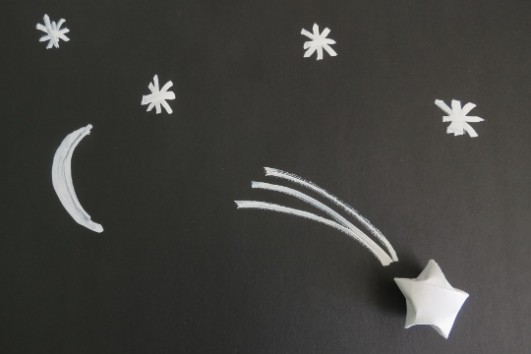 The papers promised a meteor shower. Here was a great excuse to take a spin out of town. I haven’t been off the Jerusalem-Tel Aviv axis in a while (Bethlehem is essentially a Jerusalem suburb). Nothing sounded more appealing than heading into the dark hills to chase a shooting star or two.

Ruthie was feeling a tad better and encouraged me to head out, but I was unsure. Then a surprise phone call called the shots. My old buddy, Cindy, who lives in Hawaii, urged me to meet a friend of hers on a short visit to the Holy Land. The friend, Nadi, was staying in Haifa, had a car, and was eager to go watch meteors. I stuck with Ruthie for as late as it made sense, then hopped on a northbound train.

It pulled into Haifa just before 11:00. Abby waited in the parking lot. “The climax of the shower should take place just after midnight,” I informed her while buckling up, “How much time and energy have you got?” I asked.

This was more than I had bargained for. The Carmel range offers a patch of woodland, the nearest respite from light pollution. but it appeared we didn’t need to stay near. “So we can go and explore, right?”

All I knew about Nadi on the way up was that she is Malawian. I also knew she is a top class traveler. Rolling out of the city and into the Galilee, I learned that she spent much of her life in the US and was now studying medicine in Boston. She came to Haifa to support a friend, a member of the Baha’i faith, who came to volunteer at the Baha’i headquarters. We spoke of Bahaullah, of Boston and of Cindy for a long while, while seeking a dark spot. There was no such spot, so we spoke of gender issues in Malawian society. We covered the issue nicely, but there still was no dark spot. This country is just that populated.

We turned to smaller roads, but even they ended up winding around and through heavily lit communities. One such town, Kafr Manda, appeared particularly lively and inviting, so we stopped in for dinner. A restaurant on the square offered grilled meat and salads as well as live footage from the Qa’aba. Having had our fill of all three, we stopped at a nearby convenience store for the loo. I pulled a small container of what seemed to be ice coffee from the fridge, and brought it to the register. Here was a symbolic purchase to justify our use of the facilities.

I reacted with the appropriate outrage, but he was perfectly unfazed. “It’s bitter coffee,” he explained.

“I doubt you can make it quite this bitter. This cooked for two, three hours. This 50 centiliter container started off as three kilos of coffee grinds. Hold on.”

He removed the cap and poured a bit of the dark liquid into a paper cup, offering us a taste.

It was more tangy than bitter, and it was stronger than cocaine. Nadi and I zoomed back out on the road, and began energetically chatting talking about Malawi. The night was going to be long, and this conversation was to last for much of it. It will prove to be among the most eye opening I have ever had. Thank god for bitter coffee, thank god for shooting stars.

We actually did find a dark spot, somewhere atop the spot that separates The Valley of Sakhnin from the Valley of Beit Netofa. Both valleys were brimming with humanity, but up top, the stars were visible and a few of them did fall, leaving exciting trails. We sat in the middle of a gravel road, surrounded by low brush. We spoke of Malawi and occasionally fell silent, listening to crickets and to jackals. Here were actual jackals, not jackass jackals like the guys who howled at me on night two.

I was impressed with my own resilience. In fewer than two weeks, my girlfriend’s precious trust allowed me to spend not one but two nights out with not one but two beautiful women from not one but two countries of the southern hemisphere. Nadi and I found ourselves in a scene more romantic than any on Venice’s Grand Canal. I struggled against the natural urge to play Casanova. She came to my aid by describing her country’s disturbing cuisine: Grilled mice sold by the roadside, tiny birds eaten complete with their feathers, caterpillars and flying ants and the likes.

I am actually a fan of funky food, and it is exactly this menu that made me begin seriously contemplating visiting Malawi. I also realized how healthy this was for me, this interruption of my obsession with my land, to learn of a different land. Then Nadi touched on politics and my interest deepened still. “It’s deteriorating,” she said.

“Oh. That makes me feel at home. I getting to know all about deteriorating countries.”

“But it’s deteriorated far. I find it hard to believe and to stomach, but it is today the poorest country on earth.”

Nadi’s father was a dissident, forced into exile in the early ’80s. She still can’t bring up his name when she visits. The current regime, she told me, is only an mutation of the previous one. Its care for the nation was dubious at best and a spirit of rebellion was largely absent.

“People should be willing to give their lives”, she said.

We were back on the road by now. It was a silent 2:30 AM, and we were driving through the dormant town of Arab’e. What did Nadi mean by “give their lives”? Did she hope to see more of her compatriots dedicate their lives to change? Did she feel that they actually sacrifice them?

She herself spoke of dedicating her future, of taking her medical skills away from the comfortable west to the land of her ancestors, but in a Palestinian townscape, the words “give their lives” carry special weight. “Over the years, so many Palestinians were willing to give their lives for their nation’s cause,” I noted, “and it didn’t come to much. No form of violent resistance resulted in actual positive long term change. In recent years it’s all been about non-violence, and that hasn’t changed much either yet.”

That wasn’t the right attitude. This was a night of shooting stars, a night to be optimistic. “But who knows,” I added. “Maybe that will work in the long run. I’m sensing a turning of the tides in international opinion.”

We were still wired on the bitter coffee and far from ready to head back to Haifa. On the way south was Nazareth. I offered Nadi a walk through its sleepy market and a peak at its basilica. Being an Arab city, Nazareth does not appear on the highway signs. Only the much smaller Jewish town of Afula, or Nazareth Illit, the city’s Jewish suburb, get mentioned. Driving in from the north, the hometown of Jesus appears only on a single sign, planted at the heart of one of its Arab suburbs.

I looked out the window, hoping for a star that would grant me one more wish for the night: that we would be visible to one another, that we would enjoy getting to know each other as I just did meeting this new friend. What was that word Nadi taught me just before? Ubuntu. She explained that it means: “I am because you are”. I jotted it in my notepad, not to forget.