The plan was to write a leisurely travel journal: a record of Canaan’s summer nights, but the journey began with a dark event: a stabbing at Jerusalem pride, and took on a different nature. Welcome to a seven-part, nocturnal diary of shock and recovery, a true story from an emotional land. 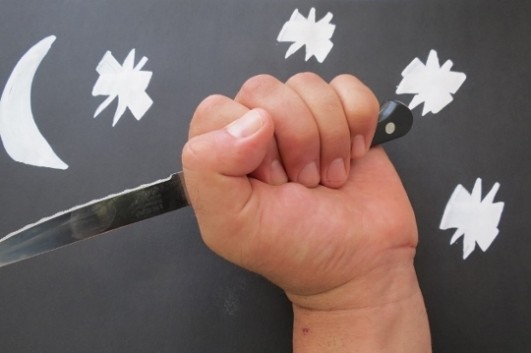 It was 6:30 p.m. or so and we were walking in central West Jerusalem when six people got stabbed right before our eyes. It wasn’t anything you wouldn’t expect. We were marching as part of Jerusalem’s LGBT pride march. In a city this conservative, every such march is met with threats, We heard them spoken through megaphones on our way over: “You perverts are not wanted here. It’s bad enough that you show yourselves in Tel Aviv. Jerusalem is sacred, stay away.”

I was in drag. I’m both proud and sad to be Israel’s only publicly-out crossdresser. I march in both Tel Aviv and Jerusalem’s Prides, hoping to inspire others who are like me to feel less ashamed, less afraid. I have overcome fear of ridicule, but now fear came back in the shape of a knife. We were close enough to see people scattering and hear the screams, and see the victims lying on the road. When the police motioned for us to move on, we walked by blood.

Soon we learned that “they” were in this case a single individual. The stabber, it was rumored, was the very same man who stabbed participants at Jerusalem Pride 10 years ago. Soon the rumor was confirmed. He was only three weeks out of prison, and the authorities somehow never bothered to check on his whereabouts on the evening in question. Six were wounded, one 16-year-old girl was in critical condition. The girl, named Shira Banki, has since succumbed to her wounds. We had witnessed a murder.

I want to be in Jerusalem

The police ushered us to the march’s end point: pleasant, easily secured “Liberty Bell Park”, which features a replica of Philadelphia’s icon. We sat on a bench with friends, all of us distraught and confused, and listened to the speakers fumble for words onstage. We were safe and in good company, but I felt restless. “Let’s get out of here,” I suggested to Ruthie, my partner, “I don’t want to be in a tolerant ghetto. I want to be in Jerusalem. I need to confront it.”

She was game. We went downtown and had soup and a salad at a small bistro. Everyone about us was perfectly cool with my attire. Unlike drag queens, who are theatrical and wish to be seen, crossdressers wish to be ignored: to be taken for actual women. This wish is seldom granted. Being particularly tall, I only “pass” to those at a certain distance from me. The bistro’s clientele knew I was somehow transgender and no one minded. That was nice, but wasn’t enough.

Ruthie preferred to rejoin the march, which turned into a protest and was heading our way. We decided to split up and reunite within 40 minutes. By now darkness had fallen. The Holy Land diary, Seven Nights, begins here.

I went down to Mea Shearim in drag. I was rather modest, but not quite in the Mea Shearim sense. Even if people did take me for a woman, I’d clearly be an outsider. Jerusalem’s most pious Jewish borough is famously intolerant of women who fail to meet the community’s modesty standards, as listed on many signs posted about the neighborhood. These are standards so strict that they even forbid long trousers. I pulled down my skirt as far as I could, out of respect and slight fear, but it still reached just above the knee.

Should I be detected as a man, well, then I would be stabbed, wouldn’t I? Maybe not. Maybe much of the talk of the neighborhood’s hostility is ultimately hate-mongering, just like that which caused Mr. Schlissel to attempt murders at Jerusalem Pride not once but twice.

Such was my experience in the past: the community, I learned, seeks respect and may demand it, but won’t bear fangs against outsiders strolling its streets. I now put Haredi Jerusalem to the ultimate test, and the same result came up. I walked through Meah Shearim, through streets large and small. Men and women straddled past me in their black coats and long skirts. No one bothered me, no one stared at me, no one harassed me, no one commented. This was what I needed. I was free from animosity. I was done.

Back in the “diverse Jewish” downtown, I met up with Ruthie, exhilarated. Around us was the protest. Rainbow flags flew high amidst chants denouncing hate and homophobia.

We reached Zion square, where our group rubbed shoulders with a different one. On the square sat an ultra-Orthodox street musician, surrounded by his audience. He is a minor Jerusalem celebrity, nicknamed “Rabbi Tomer” and known for his tolerant ways. A famous YouTube clip shows him performing a duet with a Franciscan monk.

Encouraged by my Mea Shearim experience and Tomer’s reputation, I crossed over, stood not far from his black Yarmulke, long black beard and guitar, and sang along to the words of Rabbi Nachman of Breslav: “The entire world is a very narrow bridge, and what matters most is to have no fear.”

Tomer spotted me. I stood too close for him to miss my masculine attributes. As the song ended he pointed at me. “I believe we have a representative from the march here,” he said into the microphone, “I am so glad you are with us and so sorry to hear of what happened. This is not our way. This is not the way of Judaism, we should respect everybody and never act violently.”

He then began to sing a prayer: “He who makes peace in the heavens, may he make peace upon us…” Young guys broke from the ring of spectators and came to dance with me. Others stepped over to express remorse for the stabbing. They were wearing yarmulkes. They were religious. Tomer went for a favorite hassidic tune with lyrics by Rabbi Nachman of Breslav, which we all sang together. He then dedicated “Stairway to Heaven” to me, saying: “It’s a song about a lady, and you are a lady.”

Yet no true lady would wait out the full 12 minutes of this serenade. I thanked Tomer from the bottom of my heart, blew him a kiss and moved on, to Tel Aviv. I was done. I had made peace with Jerusalem. It made peace with me. All it took was crossing over the lines. Ruthie and I drove back to Tel Aviv, encouraged. Within three minutes of walking down the street in our tolerant, liberal city, a secular stranger yelled a transphobic comment.