Netanyahu might have taken his ‘gloves off,’ but Palestinians in Gaza have long since been hardened by their bare-knuckle existence.

In the three days beginning on March 19, 2003, Baghdad endured just over a thousand bombing runs, all aimed at cowing the Iraqi capital — a city of nearly four million people — through what the U.S. military called “shock and awe.”

As of Friday, Israel had already conducted more than 1,000 air sorties over Gaza as part of its so-called “Operation Protective Edge” — this upon a population of two million with no army, no command-and-control structure, no sophisticated anti-aircraft batteries, and no state of their own. By Sunday morning, the number of Israeli sorties had risen dramatically, with at least 52 Palestinians killed in a hailstorm of bombing that included 11 airstrikes in just one five-minute period.

“It’s the worst I’ve seen it,” said my friend Jehad Saftawi, who lived through Israel’s attacks on Gaza in 2009 and 2012. We spoke by phone on Saturday night, moments after he had tweeted about a massive airstrike just outside his apartment building in Gaza City. His voice, usually soft, was amplified by adrenaline, but he ended our call by asking me to take care.

I’d heard that kind of lopsided sentiment before — from an aid worker friend who survived a six-hour gun battle in Afghanistan and saw one of her coworkers killed before her eyes. She still ends every call, every email, with the words, “stay safe.”

For civilian “veterans” of violence, the trauma of battles they can neither fight nor win is indescribable — literally. The preponderance of literature on PTSD — the post-traumatic stress most often associated with combatants — largely omits mention of those caught in the crossfire. And when that “crossfire” includes hundreds of tons of bombs tormenting you and everyone you know, day in and day out without pause, the trauma is gnawing, almost metastatic. When you can’t fight back, you internalize the battle in ways that eventually turn malignant. And when the guns fall silent, you wage war on yourself. 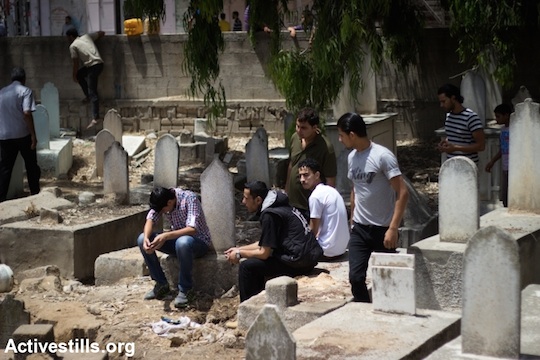 In Gaza, though, the guns seldom fall silent. And there is no chance to convalesce. Healing, says Emad Burnat in his film “5 Broken Cameras,” “is the victim’s sole obligation.” But when the victim is “hurt over and over again,” he forgets his wounds.

It’s an important lesson for anyone contemplating an endgame to this latest series of horrific Israeli attacks, which have so far killed more than 150 Palestinians, including at least 23 children. Benjamin Netanyahu might have taken his “gloves off,” but Palestinians in Gaza have long since been hardened by their bare-knuckle existence. They are, as any human being would be, shell-shocked by the brutality they have endured. But judging from my friend’s voice, there is nothing about Netanyahu’s war that will inspire awe in them.

It’s a lesson the US military learned in Iraq, and it’s one Israel will eventually learn, too. In the meantime, how many more innocents must die?

Related:
‘We stay together, or we leave this world together’
Blame Israel and Hamas both for Gaza’s civilian deaths
‘They left us no choice’: On military escalation and its Israeli rationale