Over the violent protests of its fascist fan club, Beitar Jerusalem makes good on its promise to bring two Muslim players onto team. A small victory over racism, but a victory nonetheless.

Even if it’s a drop in the ocean, it’s a pretty big drop: the Beitar Jerusalem soccer team, symbol of Israeli racism at its rawest, has been integrated with Muslim players – and it was done, in a manner of speaking, over the dead bodies of the team’s fascist youth movement, La Famiglia. The turning point came in the middle of the night last Thursday when arsonists torched the team’s headquarters, destroying its old pennants, jerseys, photographs and other mementos of its 76-year history. At yesterday’s game, dozens of La Famiglia fans were barred by police from entering Teddy Stadium, another bunch were kicked out during the game (along with some Israeli Arab fans of the opposing Sakhnin team, who were whistling during the singing of “Hatikva”). When one of Beitar’s two Chechen Muslim players made his debut, the cheers from the home stands reportedly were louder than the boos.

“We took an important step and we’re moving forward. In the end all the fans will understand that this is a done deal and there’s no turning back,” Beitar chairman Itzik Kornfein told Yedioth Ahronot.

Still, La Famiglia, whose ranks number in the thousands and who scream every sort of filth at Arab and black players, is not going away. When the police presence at Beitar games starts to thin out, probably next weekend, they will be back in full cry, or close to it. Anti-Arab and anti-black racism is seen and heard from hardcore fans of many Israeli teams (and from those of many European teams, for a little perspective) and this disease is not about to be eradicated. But its spread in Israel was just stopped; in fact, it was forced to retreat. Beitar’s ban on Arab players, unique among Israeli sports teams, is La Famiglia’s honor, and it enforced this ban from year to year through a reign of terror on Beitar’s management. “70 years of principle,” as a placard at a recent game put it. But despite the movement’s best efforts, Muslims Jebrail Kadiev and Zaur Sadayev, even though they have to go around with bodyguards off the field, are playing for Beitar Jerusalem. The soccer fascists of Israel’s capital lost a big one.

It happened because they finally went too far, and their behavior became such a national scandal that the New York Times, CNN and other foreign media picked up the story, embarrassing Israel badly. After the arson at the team’s offices, Kornfein told Israel Radio that the problem had  “gone beyond sports” and had “ramifications for Israeli society and for how we look to the world.”  In the weeks before that, a La Famiglia placard at a game read “Beitar forever pure,” reminding people of the Nazis’ attitude toward racial purity. The team was fined heavily for its fans’ behavior. The decent fans in Teddy’s western stands began booing and heckling the La Famiglia fans, who rule the eastern stands. Another important step was a Yedioth op-ed by Beitar fan No. 1, former prime minister Ehud Olmert:

If we do not remove these racists from our stadium and disconnect them from the team, we will be just like them. I will not be attending Beitar games until they are removed. I am sick and tired of being affiliated with the dark vulgarity of people who will never be a part of what Beitar is supposed to symbolize in sports and in Israeli society.

The media, the politicians, the celebrities, notably the Mizrahi singers beloved by the virtually all-Mizrahi La Famiglia, went beyond their usual rote denunciations of soccer racism and really made it a public campaign this time. Sports Minister Limor Livnat went to yesterday’s game and reportedly promised Kadiev’s mother, also in attendance, that Israel would protect her son. Even Avigdor Lieberman showed up; I’m sure the ex-Kachnik identifies with La Famiglia, but outwardly he had to line up with the consensus. Opposition to soccer racism has never been so serious here as it is now; maybe some fans, at least, will be shamed into becoming human beings.

And maybe Beitar will take the next step and sign Israeli Arab players. A few weeks ago coach Eli Cohen, in defending the hiring of the two Chechens, said, “there is a difference between a European Muslim and an Arab Muslim, and the fans here have a problem with Arabs living in the Middle East.” He was widely denounced for that statement; he wouldn’t make it again.

It shouldn’t be a cause for celebration that the top sports team in the nation’s capital has done what the Brooklyn Dodgers did in 1947. But it took guts; the club leadership stood up to death threats, and the hatred and violence are still out there. There haven’t been too many victories, even small ones, against racism in Israel in the 21st century. So as far as I’m concerned, Yalla Beitar.

Before you go…
A lot of work goes into creating articles like the one you just read. +972 Magazine is nonprofit journalism, owned by many of our writers, editors, and journalists. In order to safeguard that independent voice, we are proud to count you, our readers, as our most important supporters. With your support, we can keep +972 Magazine a strong, independent, and sustainable force helping push the global discourse on Israel/Palestine.
DONATE
More About beitar jerusalem 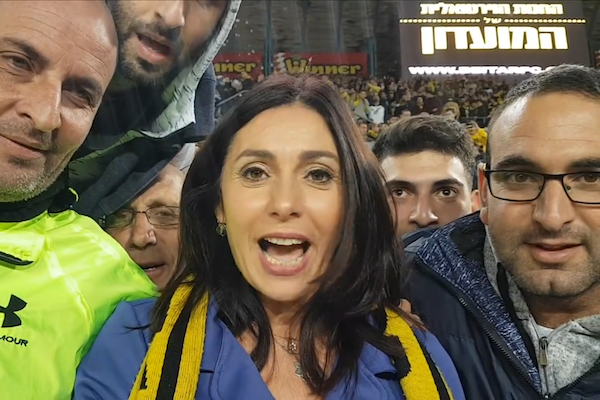 Israel’s sports minister posts video with genocidal chants by fans
At the end of a Facebook video encouraging sportsmanlike conduct by fans from one of Israel’s most notoriously racist soccer clubs, those surrounding Miri Regev break out into chants of ‘burn your village,’ directed at the opposing team — from an Arab city in Israel. It’s not every day that a senior government minister, who a…
By Michael Schaeffer Omer-Man January 23, 2018

The metamorphosis of a Jewish supremacist
David Mizrahi, once a vocal anti-Arab hatemonger, makes amends in a heartfelt Facebook post, and begins preaching tolerance and acceptance. In the current climate in Jerusalem, that is a brave and commendable thing to do. David Mizrahi was once a prominent member of La Familia, a notorious Jewish supremacist chapter of the Beitar Jerusalem fan club. Three…
By Orly Noy August 31, 2016 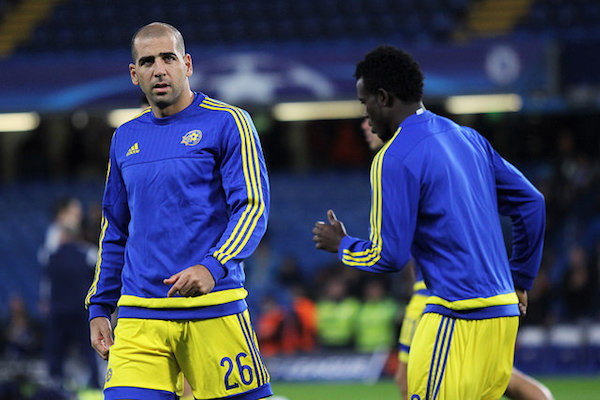 Israel’s most racist soccer club isn’t shouting ‘death to Arabs’
Compared to the overt, oft-condemned and penalized racism of Beitar Jerusalem, Maccabi Tel Aviv’s racism is more mainstream. That makes it more dangerous. An ugly brawl erupted on the soccer pitch on Tuesday at the end of a league match between Maccabi Tel Aviv and Bnei Sakhnin, which is the most successful Palestinian club in…
By Rami Younis April 27, 2016