According to a lawsuit filed by Israel’s largest labor union, Sodastream workers who tried to organize reported being harassed by the company’s management. Sodastream denies the allegations. 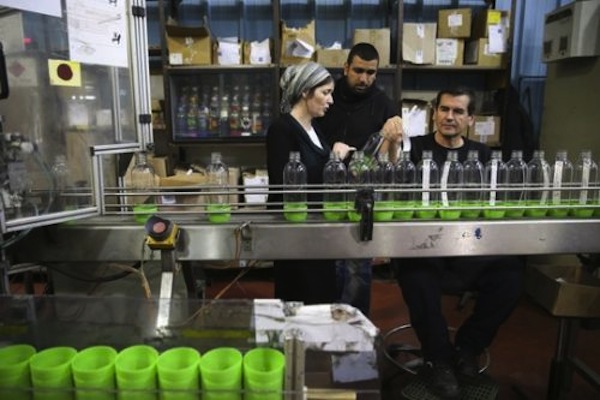 Israel’s major worker’s federation filed a NIS 15 million lawsuit against Sodastream this past month, claiming that the company attempted to disrupt workers’ attempts to organize. The story hit the Israeli press on Friday after news website Davar Rishon publishing a string of testimonies from the case.

According to the 15 million-shekel suit, filed by the Histadrut — Israel’s organization of trade unions — Sodastream workers who tried to unionize were harassed, and the testimonies brought forth by Davar Rishon, a Histadrut publication, accuse the company’s management representatives of racism and exploiting the occupation.

One example came from a Palestinian resident of East Jerusalem and a Sodastream employee, whose wife is a West Bank resident and whose children have severe medical problems. According to the man’s court testimony, an Israeli security guard at the company promised him that he could arrange for his wife to receive entry permits, or to enter Israel without papers with the help of a contact in the Border Police — so long as the Palestinian man helped to break up the attempts at unionization:

He claimed he was a security guard, but he was not wearing the security company’s uniform, he had no weapon, and no two-way radio. He heard the conversation between me and my wife and asked ‘What happened to you?’ So I told him about my son’s medical problem and about the situation with my wife. He said ‘I can help you. I have a friend in the Border Police who can move you to the hospital without a permit.

…then he told me ‘I will help you with the children, but I want you to help me work against the union. I want you to report everything you see in the factory to me. If someone signs another person up to the union — tell me who it is. If someone signed up for the Histadrut and you see him sleeping during his shift — photograph him.”

The employee initially agreed to help act against the workers, but discovered that the security guard couldn’t keep his promises, and now supports the trade union’s organizing.

The reliance of these employees on bureaucracy and permits from a military regime is a weakness that can be exploited against their colleagues.

Similarly, Bedouin women working at the Sodastream factory have reported that managers at the plant have approached their husbands and asked them to order their wives not to go on strike. In one instance, an employee claimed that a Sodastream manager had told her husband that the strike would involve her having to sleep in a tent with other men.

Sodastream and the Israeli security company deny all claims submitted by the Histadrut to the court.

The Histadrut’s court filing was not the first stage of animosity between Sodastream and the labor union. Negotiations over a collective bargaining agreement fell apart in recent months, during which time the company’s management gave official notice of their cessation and filed a lawsuit against the Histadrut’s Negev Region chairman Meir Baviof, after he was recording saying that the workers should harm the company’s management and the value of its shares.

With regards to the Histadrut’s current court action, Sodastream sent the following statement:

This is a desperate and absurd claim that must be dismissed. It’s only right that the details of the case be heard in court and not in the media. The Histadrut got a red card from SodaStream’s workers, the majority of whom, some 700 people, filed paperwork to cancel their membership in the Histadrut because of the aggressiveness and incitement to violence utilized by its representatives, first and foremost Negev Region chairman Meir Baviof, against whom a civil suit for NIS 7.6 million was filed.

Now the Histadrut is trying, with exaggerated claims, to make itself more valuable again, and instead of admitting that SodaStream employees are not interested in their services, it is trying to force itself upon the workers in any way possible. The SodaStream management is not party to the unionization process or to the mass exodus from it, and it is committed to maintaining a safe work environment in every possible way.

The current controversy comes just a year after Sodastream shut down its factory in the West Bank, after global boycotts pushed the company out of the occupied territories and into Israel. The move led to the dismissal of 500 Palestinian workers, although 74 of workers moved to the new factory in the town of Lehavim when it relocated. The Israeli government, however, refused to renew the work permits of the Palestinians who remained with the company.