The Gaza Strip has been suffering from a severe electricity crisis for years. Now, solar energy is on the rise as a more reliable alternative, one that may afford Gazans a degree of independence from Israel. 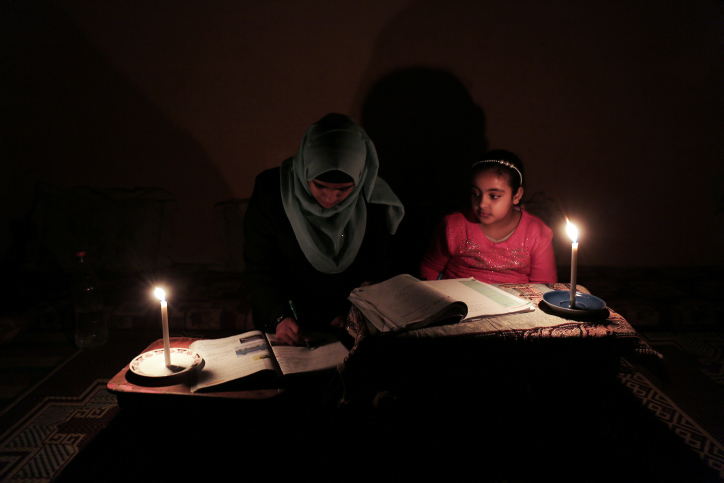 Palestinian children do their homework by candlelight at their home in Rafah refugee camp, in the southern Gaza Strip, on February 15, 2018. (Abed Rahim Khatib/ Flash90)

Two years ago, when the lights went out along Gaza’s shore, the Hindi family lit up some candles in their home. What ensued was a tragedy: their house burned down, and they lost three of their children in the fire. Unfortunately, these incidents are not uncommon in Gaza.

The Gaza Strip, home to 2 million Palestinians, has been suffering from a severe electricity crisis for years, and Gazans have grown accustomed to an average of four hours of electricity a day. A new initiative aims to harness the energy of the sun to overcome this crisis, and reduce Gaza’s reliance on Israel for electricity.

Khalid Nasman, 45, an electrical engineer from Gaza City, took it upon himself to install solar grids on rooftops in his neighborhood, where 15 houses and businesses agreed to raise $37,000 to collectively purchase a set of solar panels. “The cost of solar panels is relatively low compared to conventional fossil energy, such as natural gas and diesel fuels, which fluctuate in price. Their maintenance has also become economically and practically useless, given the frequent closures of the crossings,” said Nasman.

The cells are a source of hope, he added – they can provide electricity for an uninterrupted 24 hours, and compensate for the shortage the neighborhood incurs during outages. Solar energy has allowed residents to operate various household appliances, such as fans, which have been especially helpful during summer heatwaves. 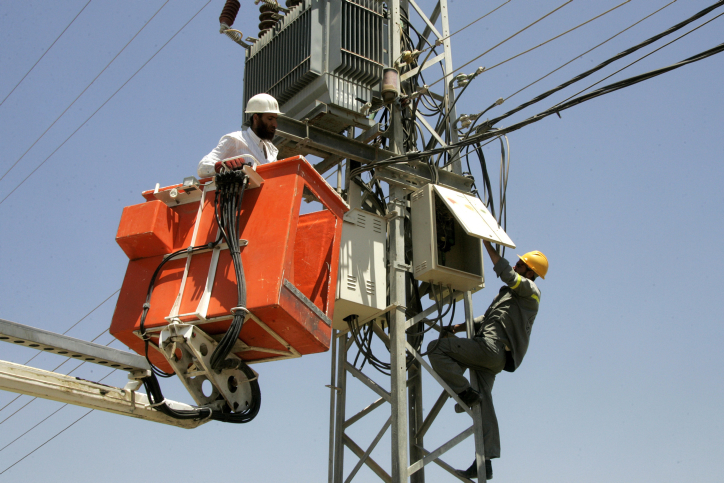 Palestinian workers trying to repair a transformer that broke down during a surge in power, following an extended blackout in the city of Rafah in southern Gaza Strip on July 3, 2010. (Abed Rahim Khatib/Flash 90)

Gaza’s chronic electricity deficit intensified after Hamas took over the strip in 2006. That summer, when Hamas militants captured Israeli soldier Gilad Schalit (he was released in a 2011 prisoner swap), Israel bombed the only power plant there, which used to supply 43 percent of the electricity in Gaza. Now, the strip needs an estimated 500 megawatts a day but only gets about a third of that, from three different sources. The power station in Gaza produces about 23 megawatts, 120 megawatts are imported from Israel, and the Palestinian Authority purchases around 30 more megawatts from Egypt.

Earlier this year, the United Nations Office for the Coordination of Humanitarian Affairs (OCHA) in the occupied Palestinian territories warned that the Gaza Strip is on the “verge of disaster” due to electricity and fuel shortages. In June, Gaza’s only power company announced a further reduction in the enclave’s electricity supply, after its sole power station stopped functioning.

“Renewable energy is clean and does not generate any harmful emissions. Most importantly, it does not allow the Israelis to control it, so it can be relied upon to generate electricity for homes and various facilities and schools in Gaza and the West Bank, especially in light of its low operating costs relative to conventional energy,” said Ayman Ismail, the director of the Palestinian Energy and Environment Research Center (PEC) in Ramallah.

In 2017 alone, the Palestinian Authority connected 82 schools to solar panel grids, Ismail added. The PA’s Palestinian Investment Fund plans to build solar farms on the rooftops of 500 public schools, and sell the surplus to Palestinian electric distribution companies as an investment. The Authority also intends to supply 10 percent of homes in the West Bank with renewable energy by 2030, according to Ismail.

Engineer Fadi Bkirat, one of the founders of the Palestinian Federation of Renewable Energy Industries (FREI), said the shortage of traditional sources of electricity in the West Bank and the Gaza Strip has provided motivation to explore alternative sources for electricity generation, including solar energy. “This also reduces the electricity bill that the Palestine Electric Company pays Israel, which could amount to billions of dollars a year,” he added. 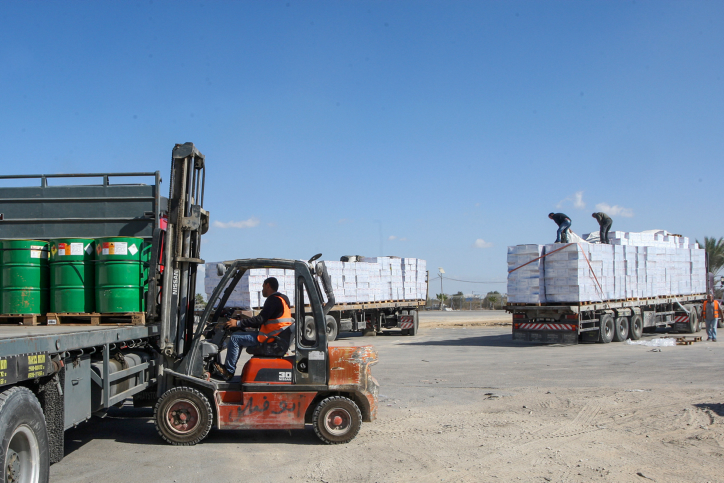 A Palestinian truck loaded with supplies entered the southern Gaza Strip from Israel through the Kerem Shalom crossing in Rafah, on November 1, 2017. (Abed Rahim Khatib/Flash90)

To attract investors, renewable energy equipment and appliances are 100 percent exempt from custom duties and value-added tax in Palestine. But, due to reality of life and commerce under military occupation, investors are hesitant to back solar energy initiatives, said Bkirat.

While renewable energy affords Palestinians some degree of independence, they still rely on Israel to get ahold of the necessary equipment. Solar cells and renewable energy appliances are imported, and enter Gaza through the Israeli-controlled Kerem Shalom crossing, the only passage point for the import and export of commercial goods.

Israel withdrew its troops and settlements from Gaza in 2005, but the IDF soon after imposed a blockade on the coastal enclave. The Israeli army now controls the strip’s land and maritime borders, determines who and what may enter and exit, and can arbitrarily decide if and when to open the crossing. As such, Israeli policy usually dictates how long a renewable energy project could take to fully implement, and whether the devices make it to the occupied territories at all.

According to economic expert Moeen Rajab, investments in renewable electricity could create hundreds of more jobs in the Gaza Strip and the West Bank, which may help reduce surging unemployment rates in Palestinian society. These investments could contribute to Palestine’s GDP, he added: energy is a key driver of economic growth in any country, and if adequately invested in as a significant part of production processes, “it could provide long-term investment opportunities in the energy sector.”

Ibrahim Abdelhadi is an independent Palestinian journalist from Gaza City who covers humanitarian and social issues. He holds a BA in journalism and media from Al-Aqsa University. 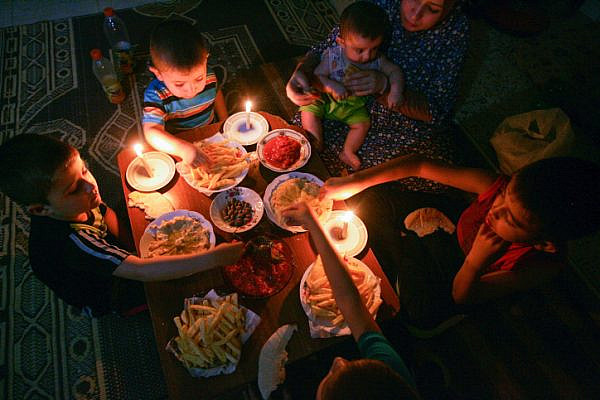 With the lights on longer in Gaza, Palestinians dare to hope
A few more hours of electricity a day may not sound like much, but in Gaza, it expels the sense of ever-looming doom and gives people something to hope for. By Muhammad Shehada For the first time in years, Gazans were able to enjoy the simple pleasure of going about their daily lives relatively uninterrupted…
By +972 Magazine November 9, 2018 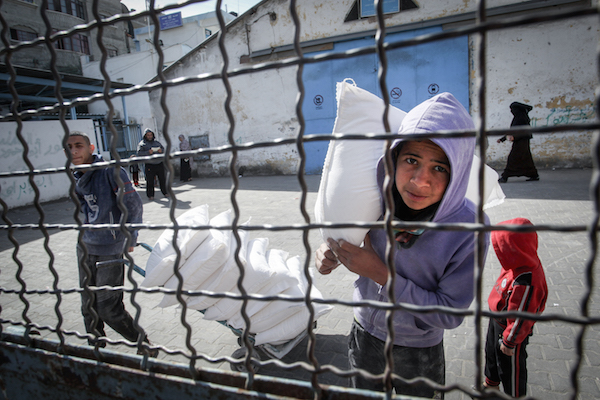 UN: Fuel for critical Gaza facilities will run out in 10 days
The Gaza Strip is on the ‘verge of disaster,’ the UN warns. Intensive care and surgical operating rooms, sewage treatment plants, and desalination plants are at immediate risk — hospitals have already begun to close. By +972 Magazine Staff The United Nations Office for the Coordination of Humanitarian Affairs (OCHA) in the occupied Palestinian territories…
By +972 Magazine February 7, 2018