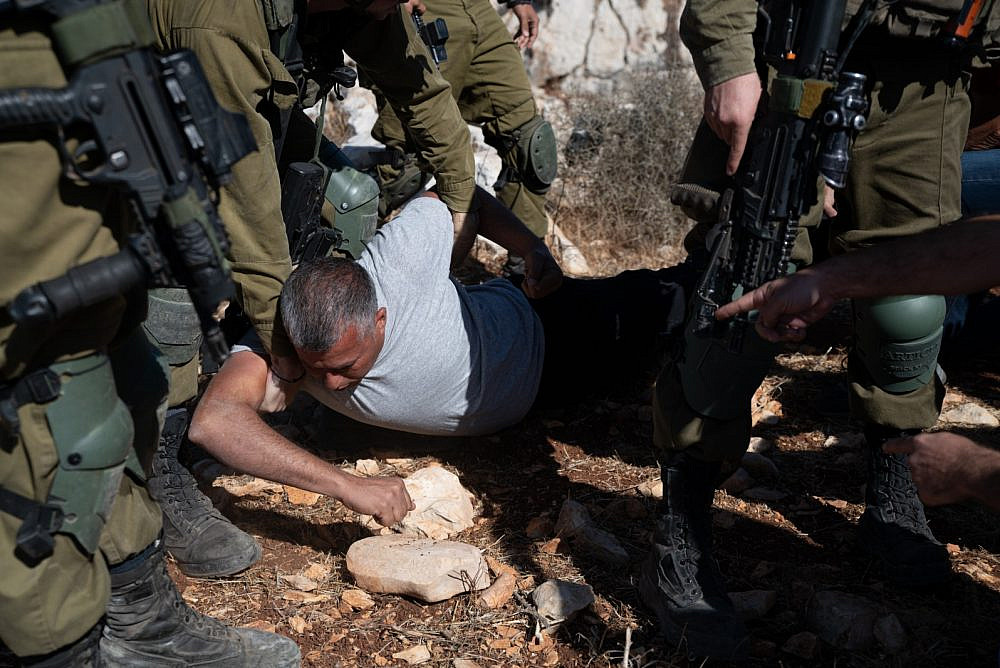 Israeli soldiers hold down prominent Palestinian activist Mohammad Khatib during the olive harvest near a settlement outpost established on Palestinian land in the Salfit area of the West Bank, October 11, 2021. (Matan Golan)

Israeli soldiers violently arrested a prominent Palestinian activist and two left-wing Israelis on Monday during the annual olive harvest in the occupied West Bank. The arrest took place in the Salfit region near the illegal settlement outpost of Havat Nof Avi, which was erected last year on land belonging to Palestinian residents of the area.

One soldier was documented punching and later stepping on Mohammed Khatib — who is active with the Popular Struggle Coordination Committee, which helps organize nonviolent resistance to Israel’s occupation and settlement enterprise — after his arrest.

“We arrived around 10 a.m. and found many soldiers in the area,” said Abdullah Abu Rahmeh, another prominent Palestinian activist from the committee. “They cordoned off the area and declared it a closed military zone.”

Several Palestinian farmers tried to reason with the officers and representatives of the Civil Administration — the branch of the Israeli military that governs the day-to-day lives of millions of Palestinians under occupation — to try and access their land, said Abu Rahmeh. Half an hour later, when neither the officers nor the Civil Administration would relent, the farmers walked along the section that was cordoned off to try and reach their olive trees from a different route.

“The soldiers followed us and attacked us with their rifles,” Abu Rahmeh recalled. “We were carrying tools for the harvest. We were not protesting, but volunteering to help the farmers. Still, the soldiers would not let us harvest.” 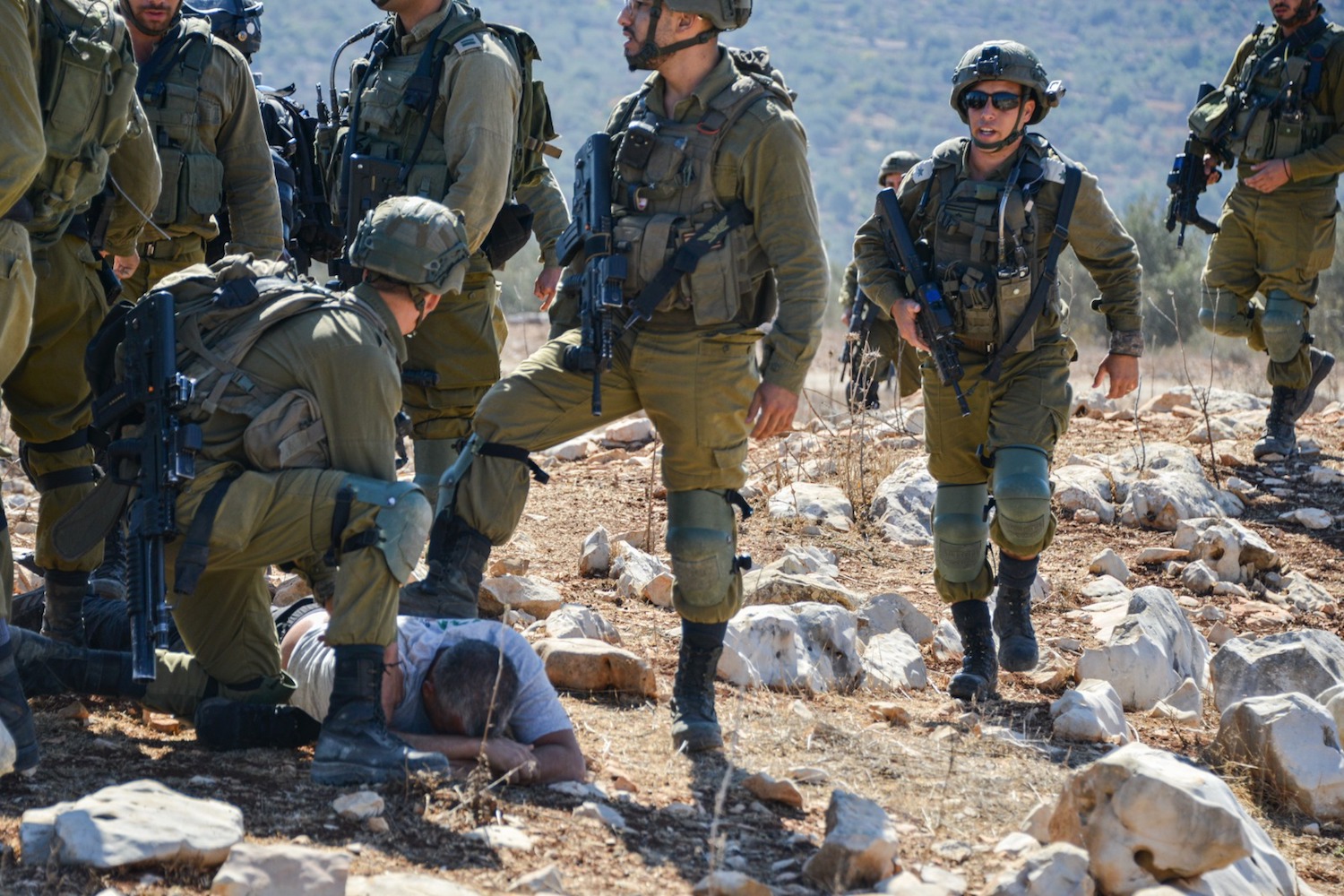 Israeli soldiers hold down and step on prominent Palestinian activist Mohammad Khatib during the olive harvest near a settlement outpost established on Palestinian land in the Salfit area of the West Bank, October 11, 2021. (Matan Golan)

The volunteers showed up as part of the Faz3a initiative, meaning “back up” in Arabic,” which was established last year. The group assists Palestinian farmers during the olive harvest to defend them against settler and military violence. “It’s an annual campaign,” said Abu Rahmeh. “In this area, the farmers are not given enough time to complete the harvest, and so we bring people to help. We try to support them and protect them from settler attacks.”

The harvest season in Palestine-Israel began last week, and there have already been several reported incidents of settlers vandalizing olive trees. On Friday, a Palestinian land owner from the village of Tarkumiya discovered that settlers had cut down his olive trees, according to the Israeli NGO Yesh Din.

In one photo of the arrest of Khatib, who is from the village of Bil’in and is a leading member of Faz3a, an Israeli soldier is seen hitting Khatib and grabbing him by the neck. Later, when Khatib is lying on his stomach on the ground, that same soldier is seen stepping on him.

“The soldiers punched Khatib, stepped on his back, covered his eyes, and took him toward the [settlement] outpost,” said Hillel Dahbash, an Israeli activist who witnessed the arrests. “The soldiers kept hurling stun grenades. We gathered to access the agricultural area and tried to reach the land again, when the soldiers kicked us out and pushed us toward the cars. They then fired stun grenades at the cars, until the last vehicle left the area.”

The harvest took place in the area of Ar-Ras, west of Salfit, where there have been weekly Friday demonstrations over the past year against the construction of the nearby outpost. Last week, Yesh Din documented settlers stealing olive trees belonging to Palestinian residents of Salfit. The outpost is one of over 100 that were built without Israeli government authorization and are thus illegal according to Israeli law. Under international law, all West Bank settlements are deemed illegal. 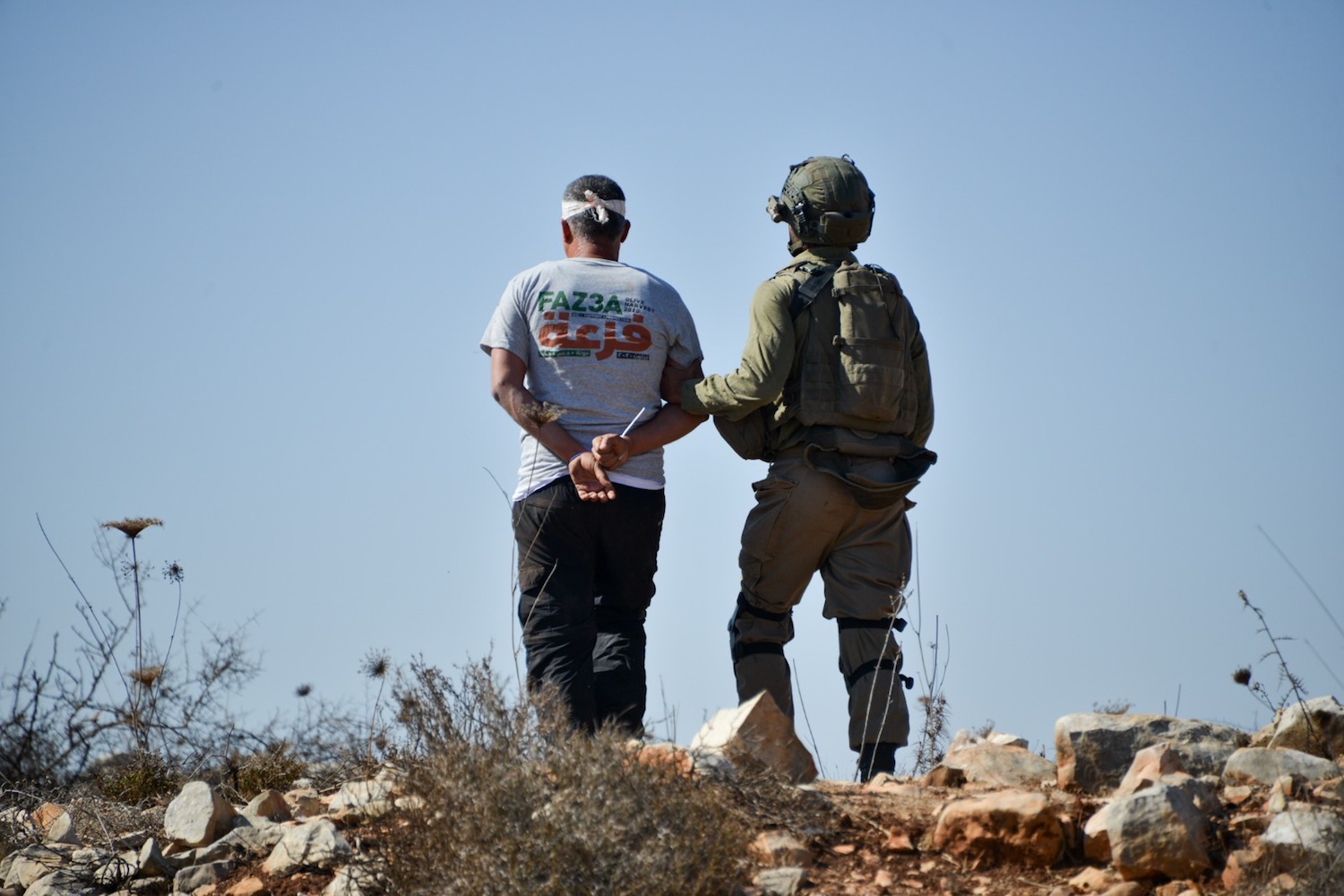 Israeli soldiers arrest a blindfolded Mohammad Khatib during the olive harvest near a settlement outpost established on Palestinian land in the Salfit area of the West Bank, October 11, 2021. (Matan Golan)

“The outpost that was built last year prevents Palestinians from accessing their private land,” Hillel added, as its borders fall right on the edge of the Palestinian olive groves.

According to activists at the scene, the Israeli soldiers told the farmers that, had they avoided “provocations” by arriving alone without Israeli reporters, they would have been allowed to access their land and harvest the trees. But, as in other areas across the West Bank, many Palestinians are concerned about showing up to tend to their groves on their own, without additional protection from settler attacks.

The Israeli police have kept Khatib in detention since Monday. He will likely be brought to military court later this week. Unlike Israeli detainees, who have to be brought before a judge within 24 hours of their arrest, military law allows Palestinians to remain in detention up to 96 hours without a court hearing.

The two Israeli activists who were arrested with Khatib, meanwhile, were offered release on bail and a ban from entering the area near the outpost. The activists refused and chose to remain in detention in solidarity with Khatib. Upon being brought to the Petah Tikvah Magistrates’ Court on Tuesday, the Israelis were given a five-day ban from the area.

On Tuesday evening, Khatib was brought before an Israeli military court in the West Bank, where an Israeli judge ruled that while he had likely committed an offense, he should still be released, especially in light of the fact that his Israeli counterparts were also released that day. The judge set Khatib’s bail at NIS 1,000 and banned him from the area for a week.

A request for comment on the soldiers’ violence was sent to the IDF Spokesperson on Monday evening, but they have yet to respond. It will be published here if and when it is received.