facebook twitter email link
It’s been two years since peace activist Seán O’Neill last visited Israel and he’s noticed some fundamental changes to the Israeli left. While solidarity with Palestinians is on the rise, activists are under tighter surveillance of the state 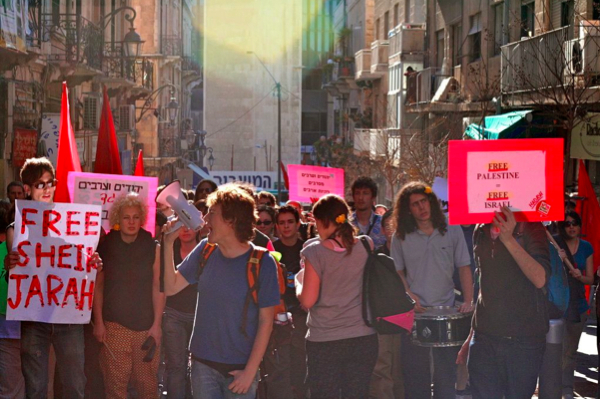 An Israeli activist friend called me Thursday night with some parting advice as I left for my hostel after getting a beer with him.  I had mentioned that Friday I would head down to the weekly protest at Sheikh Jarrah.

“Be careful,” he said, “it’s getting dangerous out there.”  Then he added a clarifying point: “For people on this side.”  He gestured with his head to the streets of West Jerusalem behind him, lined with bars and cafes.  By “this side” he meant Israelis, and while I’ve never been part of any side, his point was taken.

Two years ago I was denied entry at Ben Gurion airport, putting an abrupt end to my work with Christian Peacemaker Teams in the South Hebron Hills.  For most of 2006  to 2009 I worked on CPT’s project based in the village of At-Tuwani, supporting a nascent, grassroots Palestinian-led movement of nonviolent resistance to continued Israeli occupation and settlement expansion.  Often on Saturdays, anywhere from a handful to several dozen Israeli activists would come to the area to be in solidarity with the Palestinians.  It wasn’t always an easy relationship, but there was a sense on both sides that it was the nucleus of something important.

Back now for the first time since then, that movement seems to have taken some significant steps.  For one thing, I used to be able to recognize the majority of Israeli activists that would turn up to stand with Palestinians at actions or protests.  Friday at Sheikh Jarrah I recognized only one.  Another Israeli activist friend, who I’ll call Eli, contends that the weekly Sheikh Jarrah demonstrations have helped get more Israelis involved.  Showing up at Sheikh Jarrah, after all, is an easier first step than taking to the the hills south of Yatta.

Another change is a sense that the democratic space Israeli activists used to enjoy, in contrast to their Palestinian counterparts, is shrinking.  This is what my friend was referring to the other night when he said it was getting dangerous.

He wasn’t referring to danger from Palestinians, which one still thinking in terms of stale paradigms of a conflict between two peoples might assume, but rather to danger from other Israelis, including the institutions of the state.

His words struck me with a particular resonance because they echoed the sentiments Eli had expressed in a conversation the day before.  Eli is veteran of the anti-occupation left.  He’s no stranger to scrutiny from the Israeli government.  They’ve had a file on him for years. I know, because I saw it during interrogation at the airport when I foolishly listed him as the friend I was coming to visit.  Yet sitting on his back porch on a hilltop town in the Galilee on Wednesday, looking out over the deceptively peaceful Jezreel valley, he said he felt that something fundamental is changing.

“Soon someone’s going to get killed,” he said.  “I mean an Israeli.  Arabs getting killed is normal, people accept that.  But soon they’re going to kill an Israeli, and then we’ll see who the real activists are.”  Eli said he noticed a new level of hatred from the Israeli security forces levelled at Israeli activists.  At one recent demonstration in Beit Ummar a furious soldier called him a nerd and then proceeded to head butt him.  “You’re the guy we used to beat up on the playground in school,” the soldier told him.  This was particularly disturbing to him.  After all, this was a hostility that transcended politics.  This was about a loathing of the different or the weak, the very people a robust democracy is supposed to be able to protect.  Fascism, on the other hand, hates the weak and idolizes the strong.  Fascism is a word that the Israeli left is using more frequently these days, and they don’t mean it as hyperbole.  At the Sheikh Jarrah protest, one Israeli woman donned a shirt that said “Fascism sucks.”  A Israeli man held a sign that said “Jews and Arabs united against fascism.”

Eli’s view was that as Israeli democracy erodes, and as Israeli activists are subject to more of the violence that has traditionally been reserved for Palestinians, a new and ever more meaningful solidarity between the two groups will develop.  The Arab Spring and Israel’s awkward unease with the broader region’s growing democratic movements highlights this evolution, and may well expedite it.  But it didn’t create it.  Palestinians and Israelis having been building a shared struggle at the grassroots level for years while the talking heads of the world have remained confounded at the continued failure of the charade known as “the peace process”.

Furthermore, the sites of this struggle have spread in the last two years and the movement is pushing its way into the consciousness of the average, apolitical citizen.  No longer are demonstrations restricted to villages in the West Bank.  Now they are in Jerusalem and, as of Nakba day, on the borders with Lebanon, Syria and Gaza.  If the front lines were once several service taxis away from the bars of Jaffa street, now they are an easy 10 minute walk.  At the same time, if Israeli ultranationalist extremism and its attendant violence was previously confined to remote settlement outposts or the old city of Hebron, Jerusalem Day on Wednesday brought it to Damascus Gate, just a stone’s throw away, no pun intended, from Western tourists lounging in the Jerusalem Hotel.

There is a palpable sense that a storm is brewing.  Arguably it has been brewing for years but after two years away, it actually feels two years closer.  Perhaps it’s overly audacious to believe that on the other side of the storm lies a shared future, but I can’t help but feel optimistic.  And yet the uneasy question remains of how many lives will be destroyed in the meantime.