Hundreds of Palestinian, Israeli and international activists partnered together to repair a central access road in the South Hebron Hills. Israeli soldiers then declared the area a closed military zone, forcibly dispersing volunteers. 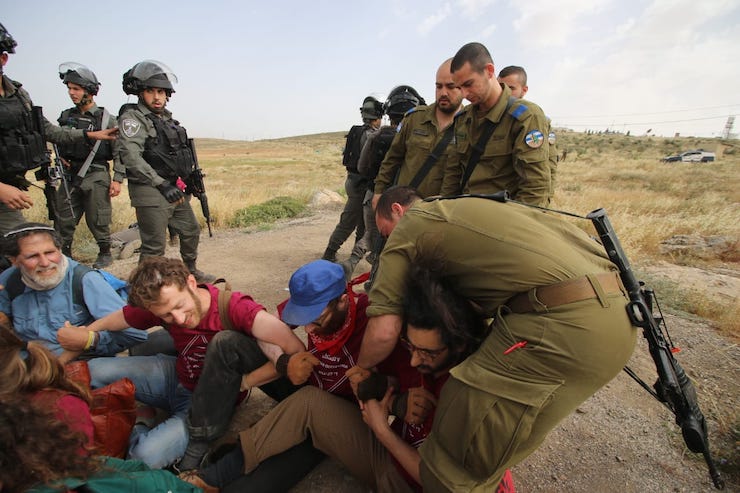 The Israeli army assaulted and forcibly arrested 17 people Friday after a group of more than 125 Palestinian, Israeli and international activists tried to repair a road in the West Bank. The road serves as the most direct access point for a small cluster of Palestinian villages that sit in the valley between two hilltop settlements in the South Hebron Hills.

Among those arrested were three Palestinian residents of the area — one who is under 18 — as well as two Palestinian journalists, and 12 Jews from various backgrounds, including two rabbis. By 10:30 p.m., everyone was released.

Palestinian activists from the villages of Susiya, A-Tuwani and Umm al-Kheir were joined by a group of American and Canadian Jews with the Center for Jewish Nonviolence (CJNV), along with members of the Israeli anti-occupation collective All That’s Left. Dressed in maroon shirts bearing the line “end the occupation” in English, Hebrew and Arabic, the volunteers spread out along the winding stretch of road where they broke up giant rocks and filled in potholes with gravel and dirt, all while singing songs in Hebrew and English.

Around mid-morning, soldiers and border control agents arrived, enclosing the area and blocking entry and exit. The soldiers, fully armed, declared the area a closed military zone and told the activists they had 10 minutes to leave, or face arrest.

When the activists continued to work past the 10 minutes, soldiers approached, first targeting Palestinians. A solider reached for Nasser Adaraa of A-Tuwani, who was walking away from the scene. When Jerusalem-based activist Daniel Roth intervened, reaching for Nasser, the solider pummeled him to the ground. 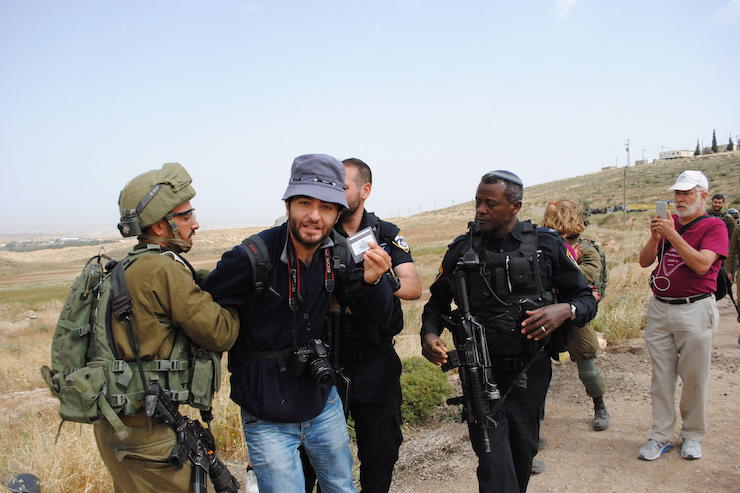 Israeli soldiers arrest photographer Ahmad al-Bazz while he was covering a group of activists attempting to repair an access road for a cluster of Palestinian villages in the South Hebron Hills on May 3, 2019. (Sam Fine)

Tensions escalated from there. The group of activists linked arms to form a protective circle. Soldiers grabbed their limbs, backpacks and clothing in an effort to disperse them. Sound grenades pounded, sending plums of smoke into the air.

A video taken at the time captures a soldier punching an activist in the face. Other young people who were at the site said they were kicked and choked by soldiers.

American Jewish activist Ashley Bohrer said a number of soldiers stepped on her body. “One on my neck,” she said, her maroon shirt ripped at the shoulder exposing a line of burst blood vessels along her collar bone. “I watched three soldiers simultaneously put their hands around Nasser’s neck trying to choke him. We resisted completely nonviolently.”

When asked about the decision to declare a closed military zone and arrest activists, an Israeli soldier present said: “There’s nothing we can do, this is the law.” 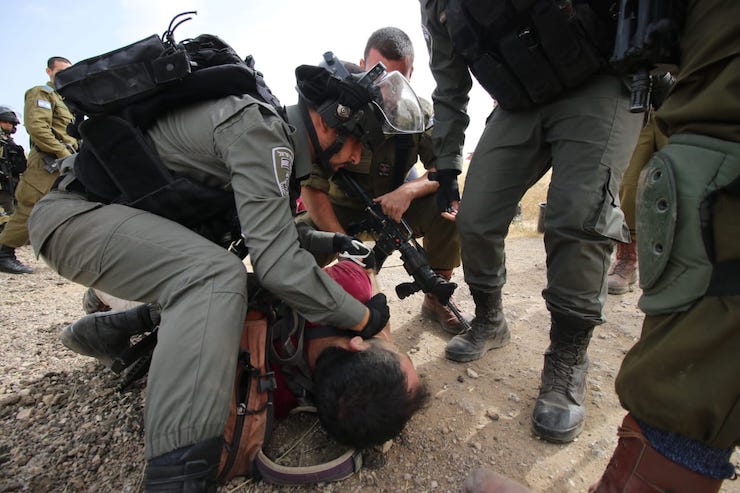 The violence lasted for nearly half an hour. The detainees were eventually taken to a jail in Givat Ha’avot, a neighboring settlement, for questioning. In the lull following the detention, some activists resumed their work, while others discussed ways to demand the army release their friends. A handful of workers linked arms and slowly walked toward the soldiers. The military advanced, throwing sound grenades and marching the activists backwards.

The action comes on the heels of a number of home demolitions in the area last week. Basil Adaraa, Nasser’s son, who has been documenting these demolitions, said fixing the road felt like an active act of solidarity, helping Palestinians in the area access basic resources, like water and food.

“I’m always documenting what’s going on, from demolitions, settler attacks, approaching their trees, cutting the network of the water,” he said. “So today I’m very happy that I’m not just documenting, I’m coming to do some work with the activists here. Jewish, international, Palestinians — we are working to fix [the road].”

Abu Tariq, an elderly shepherd who lives toward the base of the road in an area that is particularly difficult to access, said that, despite the uneven terrain, traveling on the road is also dangerous because he often faces instances of settler violence.

“When you go with the sheep, [the settlers] make a problem with you,” he said in a deep, raspy voice. He spoke with the help of his son, who translated. Another man in the conversation jumped in to explain that in 1986, an Israeli police officer shot Abu Tariq in the face. “One year, he eat from a tube. From nose to stomach. His [raspy] voice is from this,” the man said.

From forced expulsions due to the establishment of live-fire zones, to dire living conditions and lack of access to basic resources, the population of the area has dwindled significantly, leaving Abu Tariq as the sole resident of this section of the Bir il-Eid village. 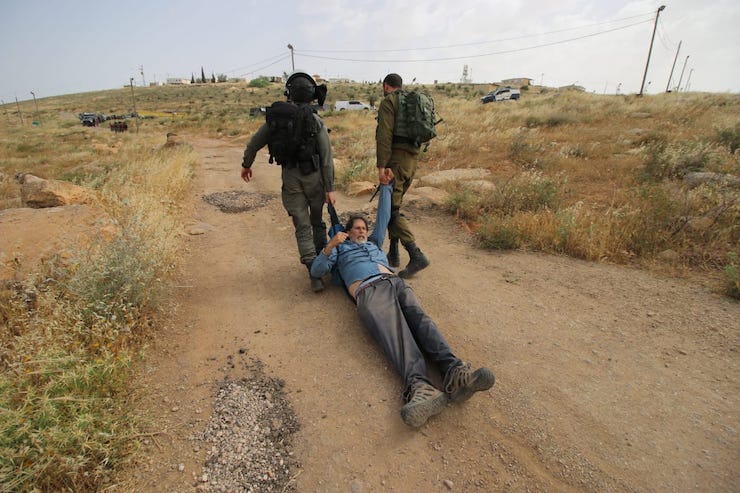 Israeli soldiers drag Rabbi Arik Ascherman while he and a group of activists attempt to repair an access road for a cluster of Palestinian villages in the South Hebron Hills on May 3, 2019. (Ahmad al-Bazz/Activestills.org)

Rabbi Arik Ascherman said — before he was detained — that it is a perfect day to be working on this road, since the Parsha, or weekly Jewish Torah portion, is Kedoshim, or holiness.

“‘You shall be holy for I, the Lord your God am holy.’ And holiness means doing justice and preserving human rights, honoring the image of God in every human being,” he said, readjusting his kippa.

“It’s so moving to have this cooperation between Jewish groups from abroad, other international groups, an almost unprecedented level of cooperation between the different Palestinian communities and some of us Israelis all together, that makes this very, very, very special and is not something to be taken for granted.”

Correction: A previous version of this article mistakenly stated that the 17 activists and two journalists were detained. In fact, they were arrested.

Arianna Skibell is a writer and reporter currently based in Jerusalem. She previously covered Congress and climate change for E&E News in Washington, D.C.