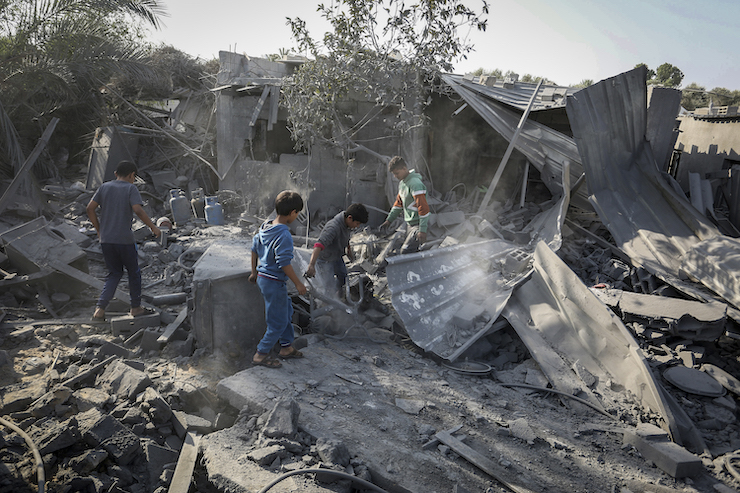 Israelis in the southern towns of Sderot, Ashdod, and Ashkelon are no longer interested in vengeance. Perhaps it’s their weariness and desperation, or the fact that Benjamin Netanyahu ordered — for transparently political reasons — the targeted assassination that started the latest round of violence. Whatever the reason, there were almost no calls for the army to take over Gaza and kill as many Palestinians as possible. Rather, stability seems to be the goal.

Between the sirens and running to the bomb shelters, local residents told +972 they wanted a resolution to the conflict. Some tried to silence one resident who made racist statements about Muslims to a journalist from a foreign news outlet. With each new round of violence, it seems that more people in Israel, and particularly in the south, clearly see that there is no military solution to the situation in Gaza.

Benny Gantz, the Blue and White party leader, provided one illustration of this change in attitude when he was a guest on a morning television show on Wednesday. The man who once boasted about how many people he killed in Gaza has modified his tone; now he speaks about the need for a long-term solution that is not only military. “We need to make it possible for the two sides to be good neighbors,” the former army chief of staff said. “There must be deterrence, but if there is an opportunity for us to come to a mutual understanding based on economic development and good neighborly relations, then we should take it.”

Far from the sirens in the south, Israeli political leaders in the television studios were suddenly talking about Hamas as though it were the responsible adult in Gaza, demanding that it enforce the ceasefire that has largely held since the last flare-up in May. Meanwhile, the government is not willing to speak directly with Hamas and continues to enforce the 13-year blockade, which is the primary cause of Gaza’s dire living conditions.

One year ago, on November 13, 2018, Mahmoud Abdul-Hamid Abu Asba, a resident of the West Bank town of Halhoul, was killed in his bed when a rocket hit his building in an impoverished area of south Ashkelon. Even if he had had time to get out of bed, he would have had nowhere to run — because there is no bomb shelter in or near his building.

A year later, the situation remains almost completely unchanged. The buildings do not have any bomb shelters or reinforced rooms, and the few shelters in the neighborhood cannot be reached in the 30 or 40 seconds that elapse between a warning siren and an incoming rocket’s impact.

Dozens of people are crammed in shelter 302 on Rabbi Maimon Street in Ashkelon. Some of them are asylum seekers from Sudan who said they lacked mattresses, food, and supplies for the children. The donations that big corporations boast of making to residents of the south do not reach this place. One woman from the area brings food and water for the whole group, paying for the supplies from her own pocket. “They forced us to stay in the shelter. We are just asking for our rights, nothing more,” said another neighborhood woman.

The past two days have provided a reminder that, besides the Palestinian leadership, there is no political opposition to military operations in Israel. Nitzan Horowitz (Meretz) made some strongly-worded statements about Netanyahu having timed the operation in order to torpedo any possibility of the center-left parties forming a governing coalition, but he did not voice any opposition to the targeted assassination. 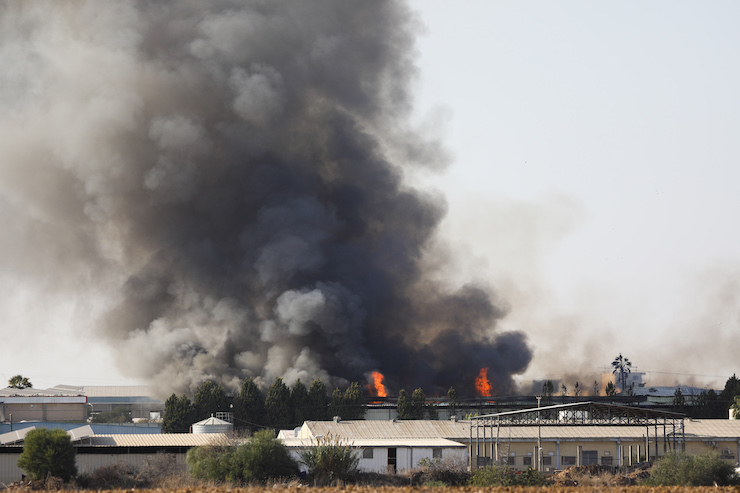 Flames rise fire at a factory in Sderot, caused by rocket fired from the Gaza Strip, November 12, 2019. (Noam Revkin Fenton/Flash90)

It is easy for Israelis to forget that a targeted assassination is in fact an extrajudicial killing, which in this case took the life of a family member — al-Ata’s wife, who was sleeping beside him. Only rarely does Meretz question the attacks on Gaza. The Joint List and leftist activists are the only real voices of opposition to the attacks on Gaza, to the military blockade, and to the targeted assassinations. And anti-war demonstrations have shrunk with each round of violence: this week, a mere 100 demonstrators gathered in the middle of Tel Aviv on the first day of the military operation.

A ceasefire was announced on Thursday. So far it is holding, with Israel already claiming its military operation was a success — even though the center of the country was paralyzed for hours on Tuesday. Schools and many public services shut under home front orders, creating a sense of emergency that could well serve Netanyahu as he looks increasingly desperate to form a unity government with Gantz.

As usual, the price for this round of violence was paid by the Palestinians in Gaza. At least 34 people were killed and 109 seriously wounded between Tuesday morning and the implementation of a ceasefire on Thursday. Among the dead are eight children and three women. It’s not clear how many of the men were connected to Islamic Jihad, and how many were killed in their homes rather than while involved in any military activity.

On Wednesday, hours before the ceasefire took effect, the army attempted another targeted assassination. This one killed eight members of the same family while they were sleeping. Five of the dead were children. The army said that the father, Rasmi Abu Malhous, was “a commander in a rocket unit”; later, however, it admitted it had bombed the wrong building. Also on Wednesday, a resident of Gaza was killed together with his two children, aged seven and 24, when they came out to greet him as he returned home on his motorcycle.

As Israel enthusiastically resumes its policy of carrying out targeted assassinations, Meretz MK Mossi Raz reminded us that exactly six years ago, on November 14, 2012, Hamas Chief of Staff Ahmad Jabari was assassinated. At the time, the government promised that “Israeli citizens would no longer have to sit in bomb shelters.”