In a land of rampant commercialism, abandonment isn’t the worst thing that could happen to an historical railway station. Elisha Baskin photographs — and insists on riding the kiddy train. 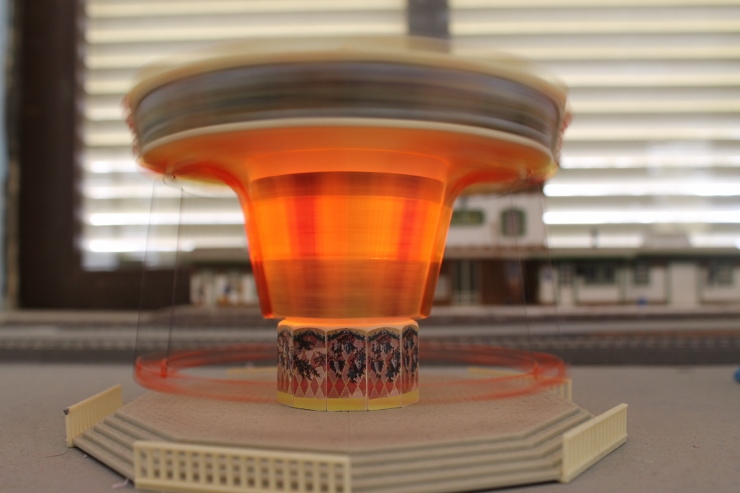 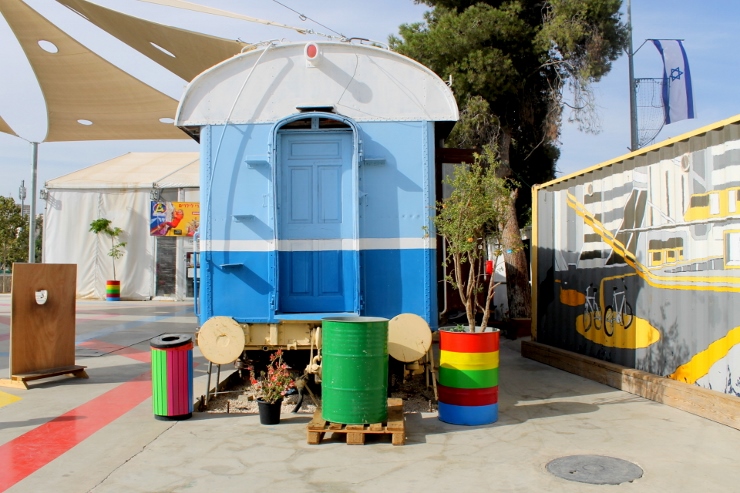 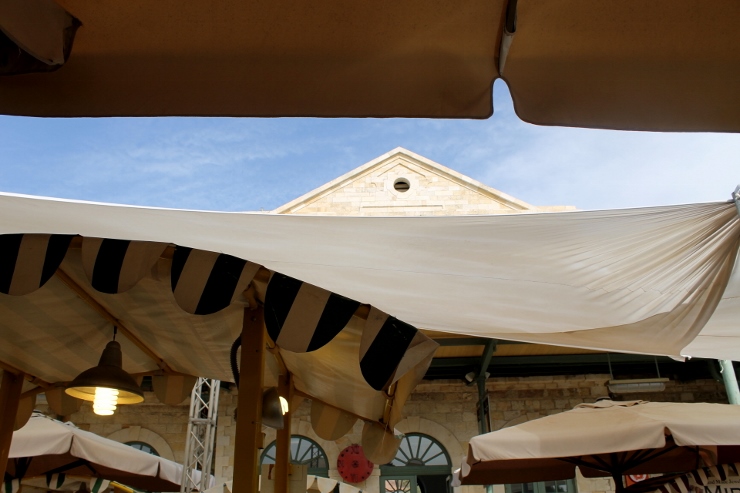 Once upon a time, the good people of this land were able to travel by train from the coastal cities up to Jerusalem. They still can, come to think of it, but nobody does. The trip is twice as long it as it is by bus and the terminal on the Jerusalem end is at Malha, a remote southwestern offshoot of the city. When Elisha and I headed to check out Jerusalem’s historical depot, neither of us even proposed the train, we automatically met at the “sherut” minibus station.

It’s a fairly interesting ride. A man in the front is speaking excitedly in Arabic to the driver for the entire hour-long journey. He’s out of his seat, balancing himself in an awkward crouch, his knees threatening to shift gears. At one point, near Abu Ghosh, he pulls out a stick of hash and singes it with his lighter. We are quite amused.

The station itself promises less excitement. It has recently been converted into a shopping and entertainment complex. No fences or thorns or squeaking stairs await us. Here is home of the ice cream cone and porcelain mezuzahs.

That in itself, however, attests to history. As a child of the 1970s I got to live in two Israels: a largely socialist one, born in 1948; and the radically capitalist one into which it metamorphosed in the 1990s. Elisha was born a decade later and came of age in the second Israel. Being a history buff, she can imagine with clarity what the earlier times were like, but it does demand imagination. The first Israel boasted a single TV channel. Its only shopping mall could be reached by train from the stone structure we are now entering. Now everything is a shopping mall, including this building.

Hopa hopa, here is no Europa

The Ottoman station’s waiting room is occupied by a quirkily designed gift shop. Mainstream Israeli singer Evyatar Banai is playing in the background. “There’s something about places that play Evyatar Banai,” I comment, with a look that adds: “down with the bourgeoisie.” She nods.

It isn’t really all that bad, though. There are a couple of nice cafés here, one of which is housed in the old signaler’s house, a concrete structure barely big enough to fit a shakshuka pan. There is a gallery, as well as a permanent exhibition of photos detailing the railway’s history. There is a nice wooden deck to stroll and an area for children to have fun in, which is where we discover a moving train.

It’s tiny. Very tiny. It’s a toy, and it loops around the interior of an actual vintage railway car. There are a few of them actually, and they travel through tiny tunnels in tiny fake Alps into a tiny European town that comes complete with an “Aral” gas station. The attendent at the model train display, Tom, speaks excitedly about the authenticity of the miniature landscape. Elisha challenges him a question:

“Why Europe? Why did you not recreate the landscape of this county?” 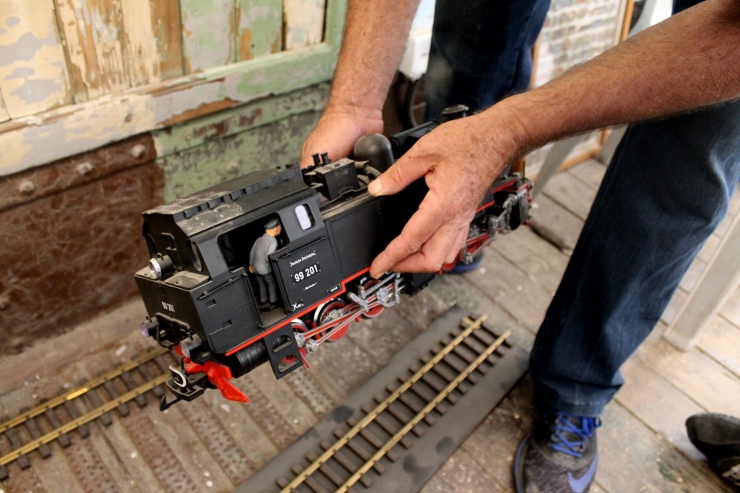 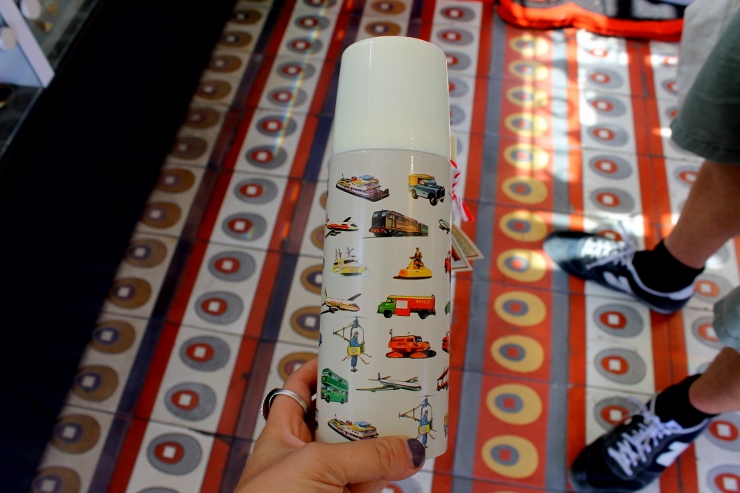 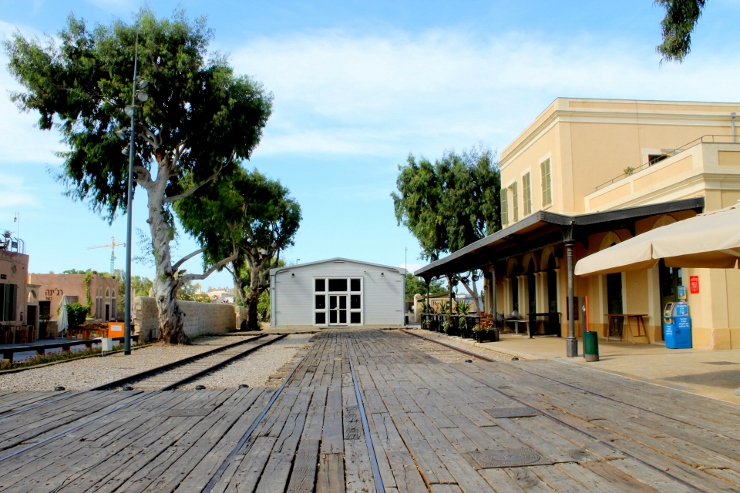 Tom explains that the two firms that provide pieces for such models are European. She accepts the explanation but the question haunts the rest of the visit. “Hopa hopa, here is no Europa” goes an Israeli satirical tune popular in recent years. We came here in search of here. Is there any here here?

There is. Shimon Futterman, the daddy of the model train display arrives and presents us with a treasure. It is a replica of a German-made locomotive that would pull trains on the Hijazi railroads. Only two such models have ever been produced. The one before us is simply stunning and rolls very nicely on rails fit for its somewhat larger scale.

“I’m a grown-up who’s been playing with trains for 52 years now,” Futerman tells us. “I have everything related to trains at home. Even my collection of books about trains is more than 600 strong.” We ask if he is a locomotive driver by trade. Turns out he’s a teacher, working with at risk youth. The “bourgeois” station complex we sneered at allowed him to drive his hobby into the open, full steam ahead.

A few days later we visit the western terminus of the same line: Jaffa station, inaugurated in 1892, discontinued as railway terminal in 1948, converted into a mall in 2010. While Jerusalem’s complex opens into the city by way of three free flowing gates, Jaffa’s station boasts a single, guarded entry. Contrary to cliché, this city appears to be far less peaceful than the hilly one.

The only photos to be found of the station’s past hang in the corridor of the management offices. This place is all about shopping, much of it high end. Tel Aviv Mayor Ron Huldai is frequently accused of catering to car dependent suburbanites at the expense of the city’s urban vibrancy as well as its sense of history. I have absolutely no debate with the critics. This place prostitutes history.

We escape without hopping on what may be the only gesture to the station’s yesteryear: an old train car that eerily shifts back and forth over a stretch of rails. Its sway apparently recreates the sensation of train travel, that vanished relic of history long replaced by parking lots and shop interiors filled with Evtayar Banai’s soft, melancholic crooning (yes, he’s here too).

In Jerusalem, by contrast, we even took the time to ride the completely un-mysterious kiddy train, driven by a Palestinian, and enjoyed the goofy noises of faux dinging bells and engine roars it emitted. That place was fine, this one isn’t our kind of joint at all. Off we go to Jerusalem Boulevard for some Libyan couscous.

On our fourth day of travel we head south to Be’er Sheva. The Ottomans extended the rails south during World War One, largely in order to facilitate transporting men, arms and ammunition to the desert front. I have heard that a limestone water tower from that period still stands in the midst of a modern residential neighborhood. These towers would provide water for the steam engines — we scaled one in Afula and saw another in Samakh. They are pretty enough in and of themselves to warrant a journey south.

We locate the tower. It really is nice, and what’s nicer is getting spontaneously hosted at the sukkah of a lovely Haredi family that lives on the block. They know all about the tower’s history and knowing the present, they send us to their city’s newest attraction: the restored railway station, now known as “Home of locomotive #70414”.

Turns out this land boasts another “station complex.” It awaits us right down the street, Again that limestone, the slanted roof, those Arabic letters in stone. The terminal was adopted in 1979 by Joyce Schmidt, a paper artist, and she established a paper workshop within it.

The top floor now houses an exhibition of creations in paper. The bottom floor is a café, and the platforms outside are filled with the cheer of school children during recess. I walk on the rails among them, and realize that I am actually balancing myself. In Jerusalem and Jaffa, the rails have been framed by wooden decks. Here they are still rails, lain on gravel. Elisha emerges from an historic wagon, camera in hand and an impressed look in her eyes. “You can’t buy anything here,” she says.

This is the best compliment any public attraction in Israel of 2015 could receive: it is not a shopping mall. It isn’t a train station either, to be sure, but need not be. Be’er Sheva’s centrally located functional station is one of the city’s major active gates, and rail travel is a way of life here. I always trash talk Be’er Sheva, calling it the only city on earth uglier than Ankara. It retains that title, but it is also a winner. Even in our days of loud TV commercials, it listens well to whistles of the past. 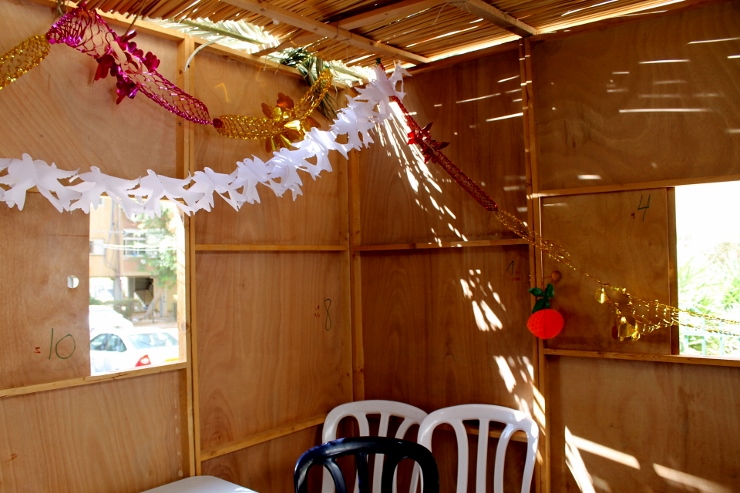 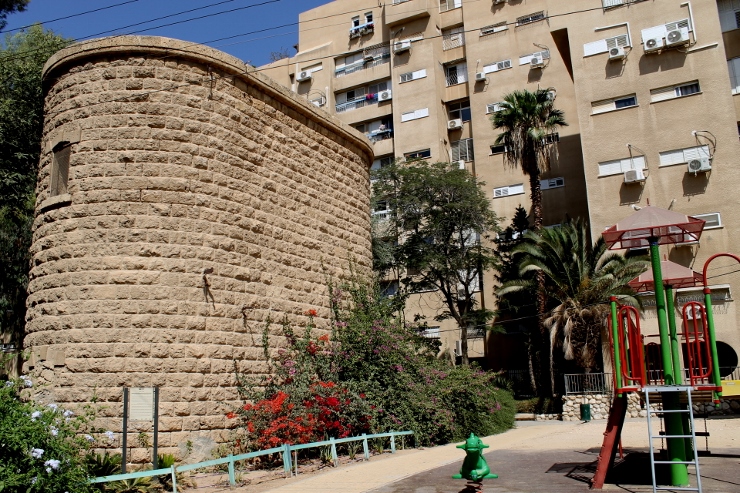 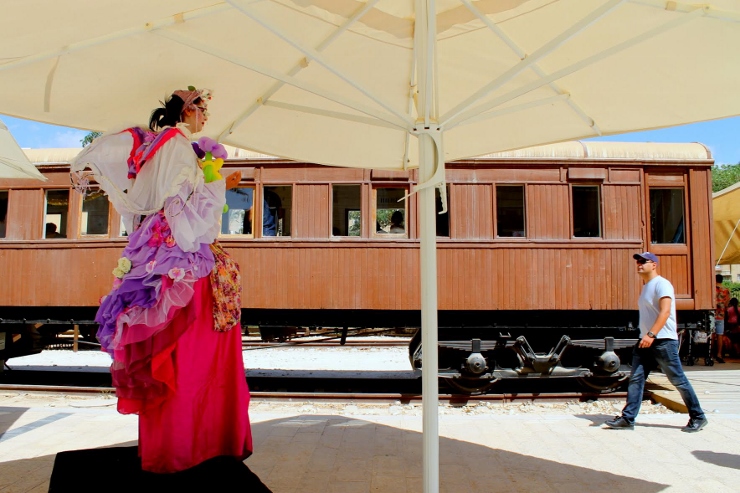