The occupation takes many forms in Jerusalem, none more pressing and fundamental than housing inequality between Jews and Palestinians, and the continual home demolitions carried out in the east of the city. 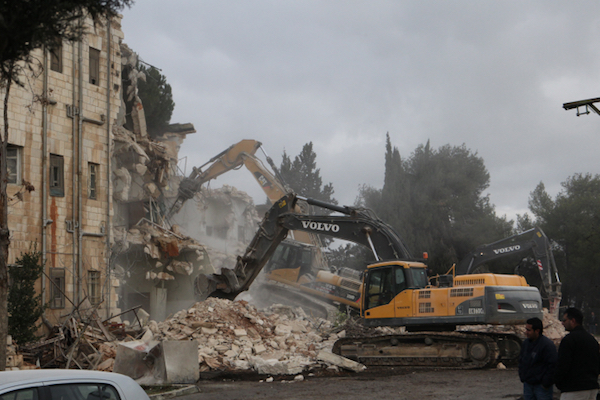 Jerusalem Mayor Nir Barkat announced last week, just ahead of this weekend’s anti-occupation protest in the city, that he is seeking a further term in office. Barkat has made the concept of “Jerusalem, the united capital” into the centerpiece of his mayorship, and with Saturday’s demonstration marking 50 years of occupation, the coalition organizing the protest has a duty to treat Jerusalem as a symbol — just as Barkat does.

The city is, politically, an important space, in which hundreds of thousands of people live under the occupation’s violent bureaucracy; Saturday’s march is therefore an opportunity to speak not just about the occupation, but also to address its various manifestations in this city, of which there are many: the different laws for Jews and Arabs; the severe shortage of classrooms in East Jerusalem; police violence; the municipality’s proud support for the settlement enterprise; the jaw-dropping inequality across every state and municipal service; and more.

Yet within this long list is one area I think it’s important to focus on, and to campaign against at Saturday’s demonstration and leading up to the upcoming local elections: housing and home demolitions in East Jerusalem.

Building and destroying at random

The planning and building situation in Jerusalem is a painful and far-reaching issue, and in East Jerusalem hinges on a serious problem: outline plans for neighborhoods in the east of the city are mostly decades old, and their purpose from the outset was to prevent building, rather than allow for it.

This fact, together with the natural tendency to move around over time, has given rise to whole neighborhoods of houses with no building permits, constructed without any kind of overarching plan. In turn, this has led to structural problems, even dangers, as well as to continual demolitions. 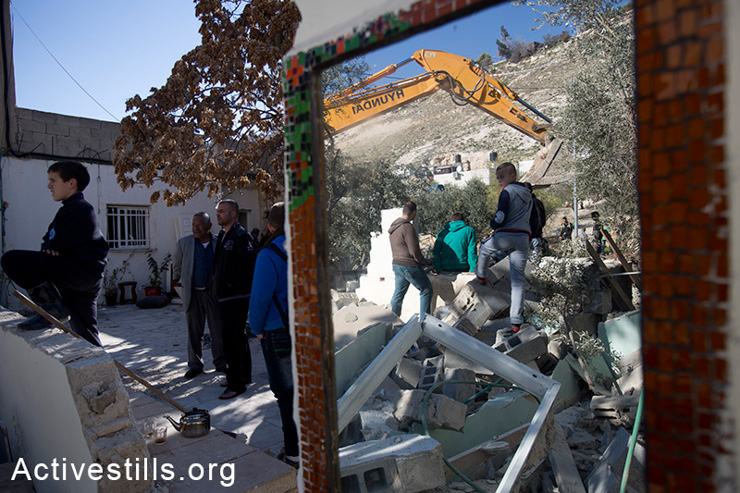 The Mezri demolished their own home after they learned they would be forced to pay for the demolition by the Israeli authorities, Jabal Mukaber, East Jerusalem, February 5, 2014. (photo: Tali Mayer/Activestills.org)

Almost no politician in Jerusalem will openly say that they are opposed to the planning situation in the city’s east, despite the role the municipality is supposed to play in this “unified” city. However, since Barkat’s anointment as mayor, the municipality and the state have pushed through tens of thousands of housing units for Jews in West Jerusalem and in the large settlements that ring the city, while making minimal plans for Palestinians. Moreover, most of the latter plans cannot be implemented, and are not worth the paper they’re printed on.

But ask anyone on the city’s planning and building committee why there is no planning and building going on in East Jerusalem, and they will undoubtedly respond that, on the contrary, most of their time is taken up with the retroactive approval of illegally-built structures. This is correct — the committee does regularly issue retroactive permits for homes in East Jerusalem, but there are three fundamental problems with this process.

Firstly, in order to be able to approach the committee, residents need to pay a fortune to various professionals (surveyors, architects, lawyers), to receive approval from their neighbors, and to fulfill all sorts of other tasks that in a logical world would be the responsibility of the municipality that residents pay taxes to. In other words, the municipality is placing the burden of planning funds on the city’s poorest residents.

Secondly, the houses that do receive retroactive approval are a drop in the ocean. Various statistics cite between 15-20,000 homes, or even more, in East Jerusalem that have been built without permits. At the rate at which the committee issues retroactive permits, even if no new houses are built, it would take over 50 years in order for every structure to receive approval. 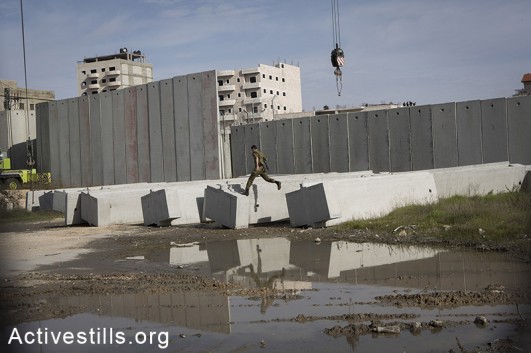 An Israeli soldier jump as a construction vehicle places a concert part of the Israeli Separation Wall in the Shuafat refugee camp in East Jerusalem, December 3, 2014. (Oren Ziv/Activestills.org)

The third problem is that while the municipality is retroactively approving some homes, it is also demolishing hundreds of others every year. Last year saw the largest number of home demolitions in East Jerusalem since 1967, and at the current rate this year, 2017 is set to overtake 2016. As these lines were being written, two homes in Issawiya were torn down.

This bureaucratic tension between approving and demolishing leaves a significant part of the city’s population in a constant state of fear over the destruction of their homes. The decision over which house is demolished and which receives a retroactive permit is not taken according to professional standards which center around the residents’ quality of life. Rather, these arbitrary rulings are made within a complex and tortuous system of bureaucrats, politicians and unapproved master plans.

And home demolitions are an especially effective tool for oppressing, scaring and pushing out those whose existence the municipality sees as a threat. The destruction of homes is not carried out as a result of planning decisions, but as a political means of maintaining a Jewish majority.

Politicians in Jerusalem speak freely about the importance of planning in East Jerusalem, which gives us space to broach the issue and make our voices heard. But our demands must be clearer and more meaningful: we need to support planning initiatives in cooperation with Jerusalem’s residents, and demand that no house will be torn down in any neighborhood that doesn’t have an outline building plan.

This is a simple and logical goal, which has political and moral significance for our city, and is inseparable from our political future.

Uri Agnon is a composer based in Jerusalem and an activist with Free Jerusalem. This post was originally published in Hebrew on Local Call. Read it here. Translated by Natasha Roth.