While the running debate at the Western Wall has been over women’s prayer, Jewish men have been playing a supporting role in shifting ‘local custom.’ 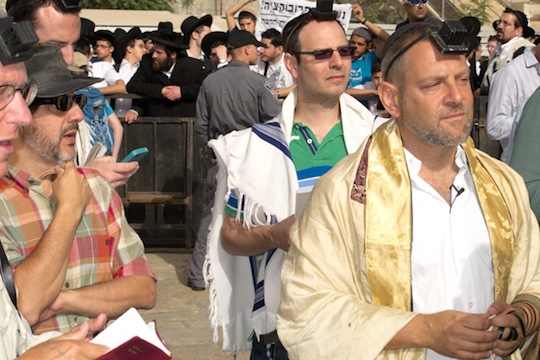 Women of the Wall supporters pray in solidarity with the women’s prayer group near the Western Wall on June 9, 2013. (photo: Matt Surrusco, +972 Magazine)

Women of the Wall may be exactly what their name implies: women. But standing and praying in solidarity with them this month were several dozen Jewish men.

In between police barricades and the familiar fence enclosing the women’s prayer area at the Western Wall Plaza, were about 30 Jewish men – Israel-born, immigrants, secular, Reform and Conservative, young and old. They came out to support approximately 300 Jewish women – many in religious garments traditionally worn by men – praying 10 yards in front of them in a similarly cordoned off section on the women’s side of the Wall.

“Their support is absolutely felt by our side,” said Shira Pruce, Women of the Wall’s public relations director. “To look over and see the supporters and men, it’s really heartening and it reminds you that we’re not alone.”

In the last two years, the number of male supporters at the Kotel has grown, Pruce said. On Sunday, the men acted as a buffer between protestors on the plaza and the women near the wall.

“It was the men who took the brunt of the harassment,” said Pruce, citing their closer proximity to Orthodox protestors, a few of whom threw eggs.

Women of the Wall’s June prayer service was met with a notably smaller crowd of ultra-Orthodox protestors, compared to last month when the Kotel plaza was filled with thousands of haredi men and women. Still, a few hundred Orthodox men lined up against the barricade that separated them from WoW’s male supporters, many of whom wore prayer shawls and phylacteries, and prayed and sang together in solidarity with the women.

Despite the physical distance between the sexes, WoW representatives said they appreciate the men’s presence and show of support.

“Women’s rights and women’s freedom cannot and should not be won simply by women. It is the authority of the Kotel that is the problem, not men,” Pruce said.

In fact, men across Israel are generally supportive of the women’s struggle for their right to pray in non-Orthodox tradition. A poll published by the Israeli Democracy Institute last month found that a slightly greater percentage of Israeli men (51.5 percent) surveyed support allowing Women of the Wall to pray at the Western Wall as they choose. Only 48 percent of women said they support WoW.

“Male support has grown, especially as many men feel the need to protect their wives and girlfriends,” said WoW board member Bonnie Riva Ras.

In April, the Jerusalem District Court ruled that the women cannot be arrested for praying at the wall while wearing religious garments and that their actions did not disturb the peace or violate legal regulations at the holy site. Days before the monthly prayer service, however, police told WoW leaders that it would be illegal for them to bring a Torah, according to Pruce.

Israel Police spokesperson Mickey Rosenfeld said a 2003 High Court of Justice decision allowed the women to pray with Torah scrolls at the archeological site Robinson’s Arch, but not at the Wall itself. Pruce said the organization is planning a legal challenge.

Founded in 1988, Women of the Wall members have seen their share of court cases. They’ve prayed at the Kotel and been brought before judges without male counterparts for over two decades.

Having male supporters doesn’t take away from the empowered women’s hard-fought victories, said Ras, who has been with the group for three years and arrested three times.

Still, Ras said she appreciates when male friends and family come to the Kotel in solidarity.

At the wall on Sunday, some of the women’s supporters debated Orthodox protestors from across the police barricades.

“They have to decide. Are they pro-women’s rights or pro-Jewish rights?” said Judah, a 27-year-old ultra-Orthodox yeshiva student, who preferred not to give his last name.

“Women of the Wall are not focused on Jewish rights. They’re focused on women’s lib,” he said, calling the male supporters “misguided.

But Andy Green, a rabbinical student at the American Jewish University Los Angeles, said his upbringing in the Conservative movement is what brought him to the Kotel.

“To say this is only about the right to wear religious garments, like the tallit and tellefin, is to diminish the issue,” he said.

Attending his first Women of the Wall service, American-Israeli Scott Piro, 43, told +972 he thought he might have to act as a bodyguard. He said he wore a sleeveless shirt to show off his muscles and Hebrew-language tattoo, which he roughly translated as “Let go, let God. One day at a time.”

“For me, it’s not about who’s more of a Jew,” Piro said. “These [Orthodox] guys are trying to bully the state and the population to have their way.”

The struggle is more about fighting for equality and against discrimination, Alex Fedan, 28, said in one of 10 shared van ferrying the women and their supporters to the Wall Sunday morning. Maura Last, a 15-year-old woman who moved to Israel from New York with her family last year, wore a colorful shawl over her shoulders and attended the service with her mother.

“Any man who is supporting [Women of the Wall], that’s a real man,” Last said.

Matt Surrusco is a multimedia journalist, studying international reporting at the CUNY Graduate School of Journalism in New York City. He is an intern at +972 Magazine. Follow him @mattsurrusco.