As top rabbis declare that attempts to draft ultra-Orthodox men into the army constitute a ‘religious war,’ masses turned out for an anti-draft rally in Jerusalem. Violent confrontations broke out between a few demonstrators and police. Thirteen were injured and 10 arrested. 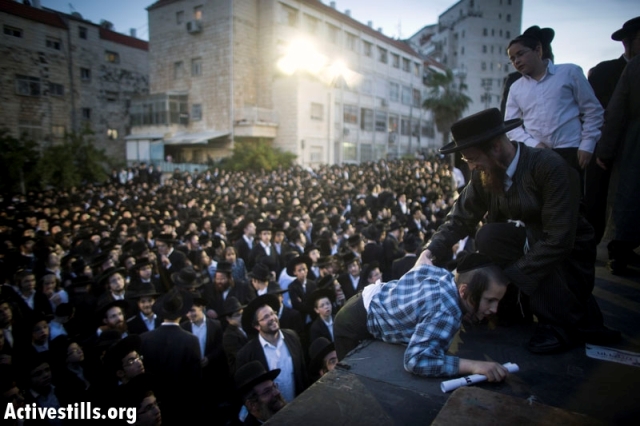 Around 30,000 ultra-Orthodox (Haredi) demonstrators, many more than anticipated, showed up for a mass rally against the planned induction of Yeshiva students outside the Israeli army’s recruiting offices in Jerusalem Thursday night. The government plans to revoke a special exemption given to these ultra-Orthodox yeshiva students, part of plan to “equalize of the national burden” orchestrated by Yair Lapid and Naftali Bennet. Rabbis on stage declared the government’s plans as “decrees of destruction” and said they are part of a “religious war” being fought between the regime and “believers,” calling on all good men to join the struggle.

“There is no room for compromise,” said Rabbi Israeli Zikerman, “just like you cannot compromise by having one eye plucked out instead of two. No child of ours will go to the army. We would rather go to prison.” Another speaker said that the rally should have taken place inside an army base, as “soldiers know that we are the ones protecting them with our studies and prayer.” The rally was attended almost solely by men, while a few women stood in small groups on its outskirts. 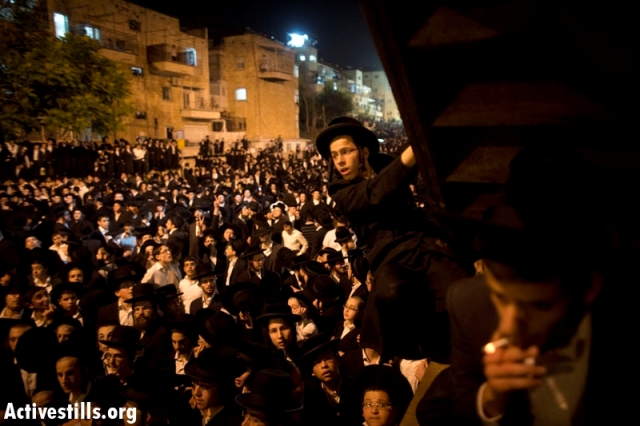 The rally was an unusual show of unity within otherwise rival sectors of the Ultra-Orthodox community: the extreme anti-statist and utterly anti-Zionist Ashkenazi faction of Edah HaChareidim was joined by one of the two larger and more mainstream Ashkenazi factions of the Misnagdim, who usually cooperate with the state, as well as by several prominent Sephardic rabbis and their pupils. An ultra-Orthodox journalist at the rally told me the new unity might have significant implications for the entire community, as draft laws could push moderates into extremists’ hands. 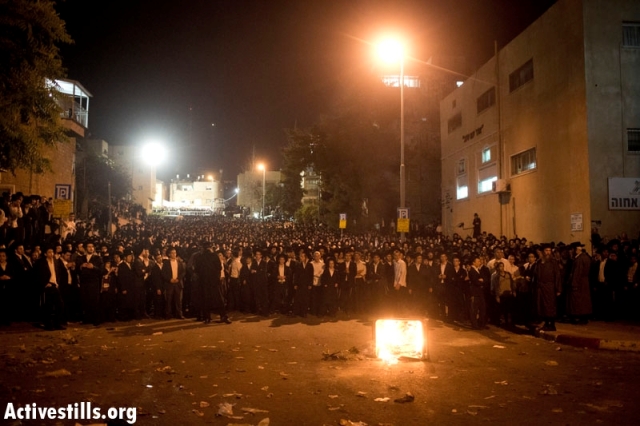 Throughout the rally, a group of several dozen youths heckled police and at times threw stones, concrete blocks, dirty diapers and metal bars at riot police, while also setting trash cans on fire. Whereas a Palestinian demonstration would have been attacked after the first stone, police stood idly by through three hours of speeches, with two of them getting injured. 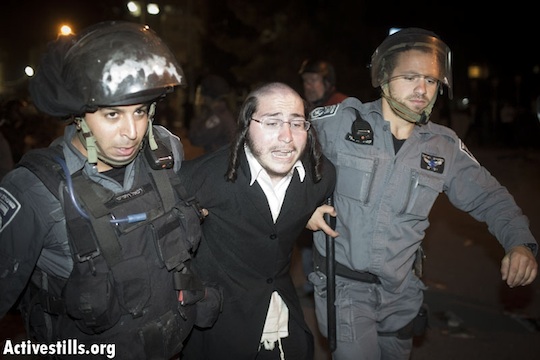 Police arrest an ultra-Orthodox man at the mass demonstration against plans to draft haredim into the Israeli army. (Oren Ziv/Activestills.org)

The second that a speaker on stage announced the rally was over, however riot and border police stormed in. Officers arrested ten people, beat up and pepper sprayed others, and used horses, batons and stun grenades to disperse the crowd. Protesters responded by torching more trash cans and throwing bottles, while speakers on stage attempted to send de-escalating messages to both sides. 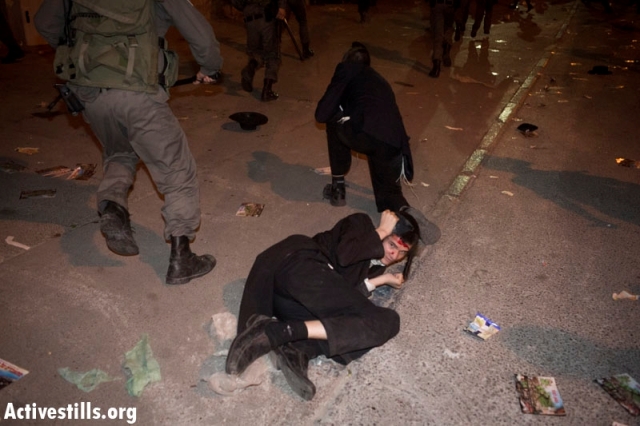 Once the rally was over, police stormed in with horses and batons. (Oren Ziv / Activestills)

Parallel to the central demonstration, a small group of thirty post-J14 activists affiliated with the more radical and anti-militarist faction of the social justice movement calling themselves “Democracy or Rebellion,” demonstrated in support of the ultra-Orthodox. They decried “ongoing incitement (against the ultra-Orthodox) by the oppressive regime,” and the “divide and rule policies that are aimed to prevent the sons and daughters of the land from uniting as a civilian and multi-cultural society and fulfilling their rights,” as their leaflet stated. Police prevented the secular demonstrators from joining the religious rally. 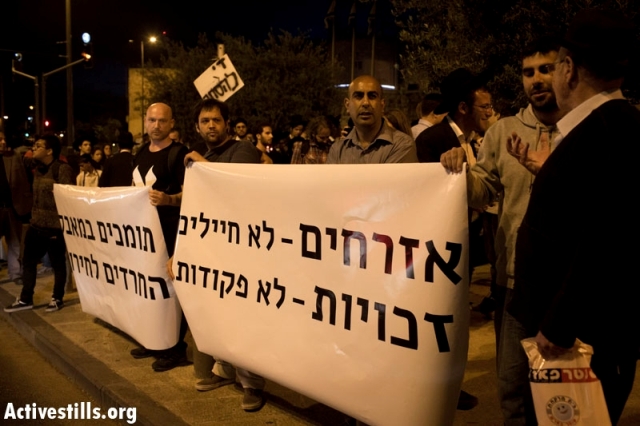 On the sidelines of the rally, the question of the occupation also led to minor confrontations. The social activists (and I myself) were asked by many why they were supportive of the ultra-Orthodox cause. While some were happy to hear the anti-militarist (and anti-Zionist) discourse, others were enraged, yelling that they want no help from “treacherous leftists who love Arabs.” They explained, “we need an army to fight our enemies and you have to serve in it while we support the cause through study and prayer.” Within the rally itself, small fist fights broke out between pro-Palestinian extreme factions and pro-state mainstream factions. These ended fairly quickly but served as a good indication of the unsolved tensions between the newly allied ultra-Orthodox camps. Their joint struggle is likely to continue in the coming weeks, and all parties announced they would hold more protests.