The deconstructed tourist trail reaches the mystical Galillean town and its many ghosts. Safed is the incredible shrinking city, forever threatened by its own capacity to be more than one thing. Part six of Yuval Ben-Ami’s journey. 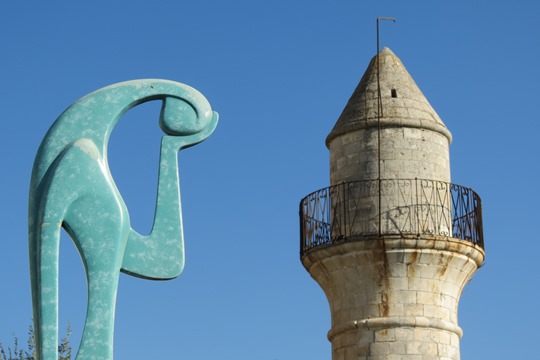 Safed makes me sick. Literally. As soon as I hop off the bus, take in the obligatory breath of fresh mountain air and settle at the “Baghdad Café” for an Americano, my stomach begins to torment me. I know this isn’t only the snack I had in Geinosar. This place makes my spirit sad, and my body sympathizes.

Safed is one of many cities around the country that used to be mixed, and no longer is. Tiberias, as mentioned in the previous post, is another. These cities survived. They were the fortunate ones. Many communities simply disappeared in the bloody days of 1948.

Safed only half disappeared: its Jewish quarter survived. Its Muslim quarter emptied and was later fashioned into a Jewish artists’ colony. My seat on the café’s terrace overlooks the old mosque, which was converted into an gallery; the tourists sitting at an adjacent table are excitedly discussing their plan to head there and take in a few canvasses. None of the refugees were allowed to return. Over the years, one of them became the Palestinian president, and as I head again to the café’s bathroom I can’t avoid thinking that I’m suffering from a case of Abbas’s Revenge.

Sick or not, when I see a sign advertising “Fricassee,” I pop in for a Tunisian sandwich. The gathering of Jewish diasporas brought a new form of diversity into the newly homogenized Safed of the 50s. Newly arrived North African Jews joined the older Jewish community, which dates back to the 11th century. Shimon, a Libyan-Israeli in his sixties, prepared my delicious sandwich, stuffed with tuna-fish, spicy Harissa and pickled lemon. “How’s Safed?” I ask him.

So much is charged into this one word, which can be most plainly translated as “turning ultra-Orthodox.” One often hears secular Israelis use it when complaining of changing atmosphere in their communities, but Shimon wears a skullcap. Then again, Safed really has become very religious over the decades. He may be wearing it only so as not to lose costumers.

“When was the first time you visited here?” he asks.

Shimon snickers. “I’m talking about the sixties. There were no air conditioners in the entire county. Everybody would come here to chill. There used to be clubs here, along this very street, and bars like in Tel Aviv. People would let rooms in their houses, everybody did. There was so much demand. It was like ‘Eskimo Limon’ (a series of tawdry Israeli beach comedies, y.b.). We kids used to carry the suitcases up from the bus terminals, work in the hotels… there’s none of that left.”

I look out of the small shop to lamp post pasted with Hassidic bumper stickers. An ultra-Orthodox family passes. One of the kids sticks his head in, enticed by the good smell. Safed used to be diverse. It was a city of Jews and Arabs, then only Jews. It became differently diverse, being a city of both secular and religious Jews, till most of the seculars packed up and left. It is the incredible shrinking city, forever threatened by its own capacity to be more than one thing.

Any wonder it makes me uneasy?

The roofs of Petrograd

I go down to the Mosque. It stands complete with its old minaret, though the crescent at the top has been removed. I walk inside. The interior is full oil paintings, small bronze casts and stone sculptures, with the dominant style broadly definable as Cézannesqe. There is a special exhibition showing paintings of pomegranates, in honor of the high holidays. I locate a single nude: a small sculpture of a pregnant woman, but that is already much for a mosque. In fact, any painting hanging here desecrates the mosque, as Islam sharply forbids the making of graven image.

Several of the paintings render Safed itself. Of those – all but one exclude the very building in which they are shown.  Meanwhile, on the southern wall hang two beautiful large-scale oils of a city I identify as St. Petersburg, Russia. I take a moment to muse of Safed and St. Petersburg, of the far and the near, of the experience of immigration and of the effect seeing a landscape painting of a familiar place has on the heart. Then I catch myself having to much fun, which doesn’t seem right, so I quickly walk out.

Outside in the yard is a tiny coffee shop. Around one of the tables sit four young people chatting in English. I approach them and carefully ask of their impression of the place. The one choosing to answer is the only man among the four, a Baltimorian named Josh. With his Yarmulke and beard he fits my profile of a tourist who is here for Jewish content, and would easily overlook a minaret. My profile, it turns out, is prejudiced.

“I realize that it use to be a mosque, and I assume it got taken over as a result of the war in ’48, “Josh said, “I’m sad that it’s no longer a mosque, but I’m encouraged by the fact that it’s still here. It was never demolished, they didn’t scrub off the Arabic inscription, and so it at least serves as a memorial to a community that once lived here.”

Josh concludes by saying that he would love to see coexistence spring up in Safed once more. I learn that he and his friends, two Americans and an Englishwoman, are all here as volunteers to teach and otherwise help in struggling communities of south Tel Aviv and Jaffa. They are supported by the Jewish Agency, but they are not here for Jews only. One teaches in a mixed area of Jaffa, another supports asylum seekers.

Josh’s statements encourage me. When traveling Eastern Europe in search of my roots, I found that the synagogue at my grandmother’s hometown in Poland is today a Tex-Mex restaurant. Even if I were to repatriate, form a new community and reclaim the synagogue, the past can never be fully restored. The Muslims of Safed were displaced by people who sought to undo an historical wrong. I agree with Josh. We should be grateful for what remained and work to better what is, knowing what can be recovered and what cannot, and the difference between the two.

If there is any city in the world that embodies the belief in positive change, it is Safed. In the 16th century, this town was home to the great Kabbalist, Rabbi Isaac Lurie. In Lurian teachings, the universe is presented as a fabric of forces, and that fabric can and should be manipulated by us humans, in order to move the world forward on the trail to perfection.

“Tikkun Olam” is the name of the program that brought Josh and his friends over. Tikkun Olam mean “the repairing of this world,” and is an extremely central in contemporary Kabbala study. Accordingly, I decide to conclude my visit with a stop at one of the two synagogues in which Luria would have prayed during his life time.

I walk over to the heart of the ancient Jewish quarter through a market offering silver gilded shofars and countless depictions of dancing Hassidim. While many Hassidim reside in Safed today, and while Ashkenazi Jews have been known to live here since the 18th century, the emphasis on this romanticized image still seems contrived. Jewish Safed of previous centuries was likely far more similar in its music, costumes and atmosphere to Muslim Safed than to your typical Ukrainian stetl.

The small interior known today as the Ashkenazi Luria Synagogue (named so even though it was in fact founded by Greek Jews) is my favorite shul in the entire land. The arc is graced by beautiful painted wings of carved wood. Below the bima is a small fenced off enclave, where the Ari’s ghost is said to have appeared once before the congregants.

There is so much to look at here, but my eyes today are drawn especially to two murals I haven’t previously noticed. They are painted on either side of the arc. One depicts Jerusalem’s Western Wall, the other shows Rachel Tomb, near Bethlehem.

The Western Wall appears as it was before 1967: towering over a modest paved lot. Not suspecting that the massive parade ground described in the first installation of this series is ever to appear, turning it into a mere backdrop. Rachel’s Tomb is a small, domed structure shaded by ancient olive trees. Today it is surrounded on both sides by the separation wall and roofed with concrete. It sits at the butt of a fjord of the wall that stretches into the town of Beit Jala, allowing Jewish visitors to visit the tomb without having to go through a checkpoint.

Here are two sacred places as we would like to see them, and not as they are. Here are two beautiful places as they appeared so recently: Rachel’s Tomb was only turned into a bunker a mere decade ago. Safed is still changing, turning more and more homogenous. I cannot stop this process, I cannot reverse it, but I can see it, and that must count for something.

Read parts one, two, three, four and five of ‘The Beaten Path’.

email
Before you go…
A lot of work goes into creating articles like the one you just read. +972 Magazine is nonprofit journalism, owned by many of our writers, editors, and journalists. In order to safeguard that independent voice, we are proud to count you, our readers, as our most important supporters. With your support, we can keep +972 Magazine a strong, independent, and sustainable force helping push the global discourse on Israel/Palestine.
DONATE
More About Uncategorized 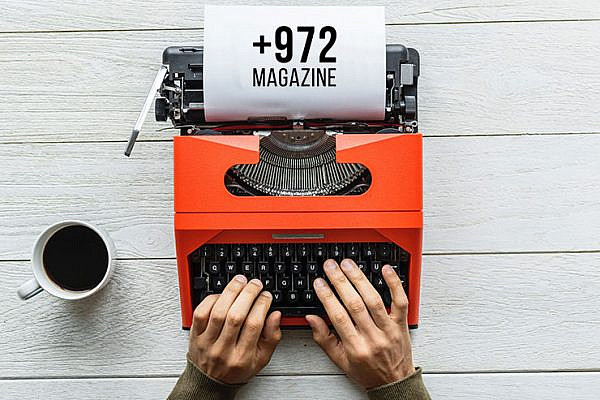