Tel Aviv isn’t a single bubble, but rather a bubble made up of myriad sexual, political and social identities. But between the sex, drugs and rock n’ roll lies a city whose nightlife is also full of homegrown segregation. Part 12 of Yuval Ben-Ami’s journey through the Holy Land’s most popular tourist sites. 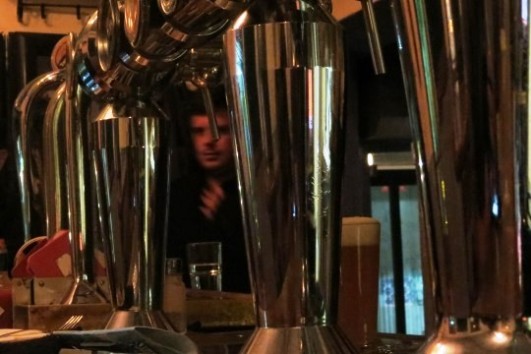 It was American-Jewish thinker Abraham Joshua Heschel who proposed, in his essay dedicated to the holy Seventh Day, that the Sabbath is “a palace in time.” “Judaism,” he wrote, “teaches us to be attached to holiness in time, to be attached to sacred events, to learn how to consecrate sanctuaries that emerge from the magnificent stream of a year… The Sabbaths are our great cathedrals.”

In the same vain Tel Aviv’s nightlife may be seen as “a tourist attraction in time.” Lacking a cathedral, the boxy Hebrew city offers a timeframe rather than a specific location, which piques the curiosity of its visitors. Travelers often head down from Jerusalem for one night (and a very long and painful morning to follow). Sometimes it is the absurdity that drives them down the hills, at least as much as the promise of fun. Could it be that a mere 40 minutes from Jerusalem, where people are being run over in terrorist attacks while others live in the shadow of the separation barrier, people are feasting nightly? Do they not have any idea where they live?

Experiencing Tel Aviv’s nightlife need not involve a desecration of the palace in time. It happens every night of the week, year round, except on the eves of Holocaust Remembrance Day, Memorial Day, and Yom Kippur. Indeed, real Tel Avivians tend not to go out on Friday nights. Instead they stay at home and rant about how suburban kids taking over the city. How the suburban kids get here on Fridays beats me, since the Israeli palace in time features a large-scale garage where all means of public transportation lay dormant for 24 hours.

Is Tel Aviv’s reputation as a nightlife Mecca well-founded? I would say so, although the heartbeat of the city is easy to miss. Tel Aviv does not give itself away to the visitor; at night, its streets generally appear empty. It takes some inside knowledge to find the right door in the right wall that leads you into one of the city’s shrines. And those, too, appear to be dead until the very wee hours of the morning. This is a late night city with a capital LATE.

There has also been a decline in activity in recent years. Mayor Ron Huldai’s attempts to limit nocturnal activities in the actual downtown and instead move it into “compounds” have hurt the city’s vibrancy. Another obvious enemy of Tel Aviv’s nightlife is Israel’s rising cost of living (it is the world’s fourth most expensive country for beer), and particularly the city’s own shocking real estate bubble (housing prices have doubled over the past seven years, with no real change in salaries). In fact, it was the cost of housing that drove many of the more artsy, bohemian communities of the city away from its center. And since the suburbs aren’t much more affordable, many flee as far as Berlin.

Joining me tonight is Zach, an American journalist. He was part of a small group I guided today, and is eager to put Tel Aviv’s nightlife to the test. We head out at midnight and make our way over to Har Sinai (“Mt. Sinai”), a friendly hipster bar adjacent to Tel Aviv’s Great Synagogue. Local artist Jennifer Abbesira is DJing a great set here. This is a grand place to kick off.

Out in front of Har Sinai we meet Dagan Wald, a man whom I can only describe to Zach as a “Tel Aviv persona” (“oshia” in Hebrew), a term reserved to people who are known for doing so many things that they cannot be defined in any other way. Wald is a moviemaker, a journalist, a “Karaoke Kaiser” and the recent subject of a police interrogation. A right-wing member of Knesset, offended by one of his Facebook posts, demanded a raid of his home. Wald’s laptop is still in police custody.

While Wald’s story pricks the membrane of Tel Aviv’s famous bubble, it doesn’t exactly pop it. We go on talking about fun things, like, uh, sex. Tel Aviv is often presented as being detached from the realities of the region. In 1988, in the very midst of the First Intifada, Tel Aviv singer Nurit Galron mocked the city sardonically from a left-wing perspective: “There’s a land of stones and Molotov cocktails /and there’s Tel Aviv, aflame with clubs and sex / there’s a land of rebels, where the wounds are bandaged, and there is Tel Aviv of parties, life, food and drink / No / Don’t tell me of a girl who has lost her eye / it makes me feel awful.”

A few years ago I hosted a group of foreign volunteers in my home after they had spent a few weeks in Nablus. There the army raided their neighborhood every night, bullets rang and blood was shed. Here we went out to the “Laika,” a now-defunct straight-friendly LGBT dance bar on Nahalat Binyamin Street. I remember emerging from the Laika and walking down that same street with Ilham, one of the activists who was originally from Cape Town. “I don’t know what to do,” she said. “I like what’s happening here. I like Tel Aviv so much, and I don’t want to like it.”

I contemplated this for a minute. “Maybe you should think of it this way: Tel Aviv is doing well, and that’s good. We have one of two cities that’s doing well. It would be a mistake to want it to deteriorate in order to reflect Nablus’s state. Let’s keep it this way and now work so that Nablus also does well.”

Behind the Breakfast Club

Zach and I now head for the “Milk” on Rothschild Boulevard, and I explain to him that in to enter we will have to go through another club called “The Breakfast Club.” I chart our course to the best of my ability, since I am already drunk on Tubi 60, a mysterious drink produced by a Haifa entrepreneur (which I believe is comprised largely of anti-dandruff shampoo).”You go in through this small door, then you walk through all the bad music to the corridor that leads to the bathrooms, and over there there’s this sort of canopy. Beyond the canopy is a totally separate club with good music and fine people. That’s ‘Milk.'”

When we arrive, however, we find that the club’s door is locked. Instead, the Milk’s exit door is open and serves as the entrance. It is there that we must pay an unusual 50 shekel cover. In short, the order has been replaced: Milk now leads to the Breakfast Club, and the Breakfast Club leads back into the night.

I lose Zach somewhere in between the two – he went to the bathroom and never returned. I don’t have his number and pray that he makes his morning flight. I stick around to dance, hang out with friends old and new and make it home at around 5:00 a.m. It takes about a day for the Tubi hangover to begin disappearing and thoughts to surface.

The switching of the doors triggers them – it recalls something. A few days ago, Checkpoint 300 – the gateway through which permit-holding Palestinians may leave and enter Bethlehem – was closed due to Jewish festivities in nearby Rachel’s Tomb. My friend and colleague Husam had to use another checkpoint, usually prohibited to Palestinians, in order to enter Jerusalem. We become dull to the strange labyrinth of gates open and shut, until a change forces us to take notice.

This labyrinth extends beyond the West Bank and its Kafkaesque network of movement restrictions. Secular Jews do not step into ultra-Orthodox neighborhoods; Bedouin do not frequent the cities of Ashdod and Rehovot; Russian-Israelis are never found in the Druze towns that sit atop the Carmel mountain; West Bank settlers typically stear clear of the “Milk”; Tel Avivians manage to take entire vacations in the Galilee without ever so much as entering Arabic-speaking terrain. There are streets for people of one sort and streets for people of another. I write this in a café where everyone, including myself, is Ashkenazi. We all know our place and which is the door meant for us.

Tel Aviv’s nightlife is full of homegrown segregation, some of it reflects worldwide urban culture: Here go the hipsters, there go the sakhim (a mocking nickname for young bourgeoisie). Here go gays, there go straights (at least since the closure of Laika). Some of it reflects sadder divides: Ethiopian Israelis and Mizrahis are often denied entry to white clubs based on their skin color. The asylum seeker and migrant worker communities have their own scenes for the exact same reason.

Tel Aviv isn’t a single bubble, but rather a bubble made up of many different bubbles. It isn’t unique in being a bubble. This entire country is made up of bubbles made of other bubbles, all ceaselessly threatening to pop one another. None of these bubbles are hermetic, and Tel Aviv is no exception. Upon hearing of Wald’s missing computer, we were reminded of where we are. Alcohol cushioned our shock, but this is normal. Although we all need a cushion to fall on in this hard place, we must remember not to surrender to it – not to imagine that the cushion is all there is.