For the general public, it seems that the feelings of an Israeli reporter are more important than the death of Palestinian youths.

By now it has become a cliché of journalistic writing in Hebrew. “I felt like I was being lynched in Ramallah,” is the way every person who has come to blows with Arabs since October 2000 describes the experience. And in the case of reporter Avi Issacharoff, even those who encounter a group of angry, young Palestinians feel free to use the cliché, without faltering or correcting the record.

But why were these young people angry? It seems that throughout his entire public recollection on the Walla! website (Hebrew), something slipped from journalist Issacharoff’s mind. An incident took place in the very same location on the previous day: the cold-blooded murder of two Palestinian youths, Muhammad Abu Da’har and Nadim Seeam Abu Kara.

Let us concentrate for a moment on the first incident. Last Thursday, May 15, was Nakba Day, the day Palestinians around the world commemorate the ethnic cleansing and destruction of more than 500 villages, and the expulsion of some 750,000 Palestinians from their homes during 1947-1949. On that day, demonstrations were held in various places in the West Bank, including Beitunia, in front of Ofer Prison, in which a thousand Palestinian political prisoners are being held. The organizers of the demonstration noted the solidarity with the Palestinian prisoners’ hunger strike, and protested the frequent use of administrative detention. 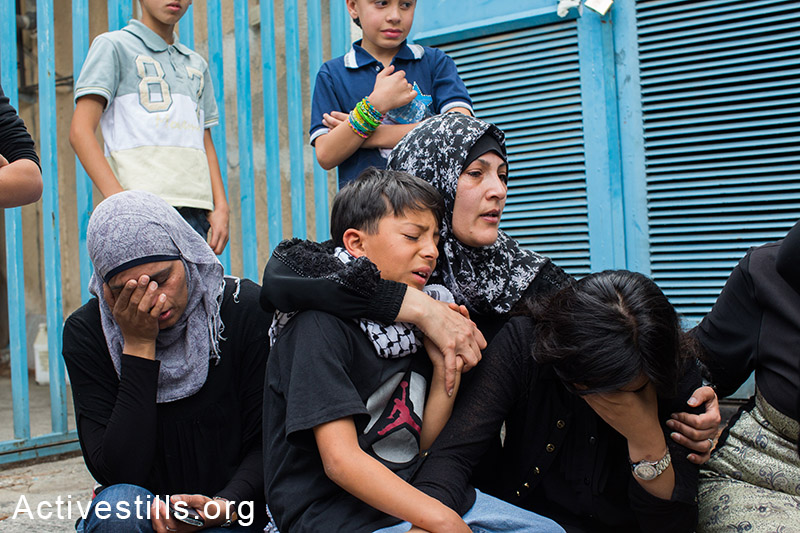 Relatives of Nadim Seeam Abu Kara mourn in the hospital before his funeral procession in the West Bank city of Ramallah on May 16, 2014. Abu Kara and Muhammad Abu Da’har were shot dead by Israeli forces during clashes the previous day outside Ofer prison following a protest commemorating Nakba Day. (Activestills.org)

During the demonstration, two Palestinian youths were shot dead. Muhammad Abu Da’har, 17, who was shot in the back and Nadim Seeam Abu Kara, 17, who was shot in the chest. A video released Defense of Children International (DCI – Palestine) taken from security cameras in the building next door, shows the two shooting incidents. In both cases it can be clearly seen that the youths did not throw stones when they were shot, that Abu Da’har was heading away from the source of fire, and was with his back to the prison when he was shot in the back.

Prior to the release of the videos, the Israeli media coverage of the youths’ murder did not depart from the usual rules set out for reporting such cases. That is, the most prominent part was taken up by quotes from Palestinian news agencies which reported on the event, with the explicit preamble that these were “Palestinian sources,” as well as the IDF Spokesperson’s comments. The latter came without any explicit preamble that these were the “usual lies.” Absent from the reports were the following: interviews with families or eyewitness, heartbreaking photos of mothers sobbing over fresh graves, or any other sign of the tragedy of losing two young kids; the loss of life, future, hopes and smiles. In other words, as always, the Israeli media hid away the bereavement and loss on the Palestinian side.

A lynching it was not

Against the very real and tangible deaths of the two youths stands the story of Avi Issacharoff. As he tells it, on the very next day he arrived to cover a demonstration in the same spot – right in front of Ofer Prison. He claimed that at one point journalists approached him and asked him to leave after it emerged that he is an Israeli. Later on, an angry Palestinian mob gathered around him and would have lynched him at any moment were he not was saved by two members of the Palestinian secret service.

Witnesses who were present contradicted most of his main contentions: there were four other Israeli journalists present, they remained and kept on taking pictures after the event with the full knowledge of the demonstrators. They say that the reason for the confrontation was the insistence of Issacharoff and his accompanying photographer, Daniel Book, on taking photos of the faces of the protesters (the army has been known to use these images to kidnap youths from their beds and imprison them for long periods of time). Despite the heightened sensitivity on the day following the killings, the organizers of the demonstration and the protesters themselves prevented any physical attacks on Issacharoff and Book. As summarized by French journalist and photographer Julie Couzinet, who witnessed the confrontation, Issacharoff simply exaggerated.

Having witnessed it myself, yes, it’s exaggerated http://t.co/llZEQpTLO2

On May 18, Palestinian journalist and author Ali Abunimah posted a series of tweets on Electronic Intifada which showed that according to investigations conducted by the Popular Committees, there was no intention to harm Issacharof personally, and that the enraged believed him to be a Shin Bet (Israel Security Agency) agent. Thus, he wasn’t attacked because he is an Israeli. Nevertheless, at the time of this writing, Issacharoff has not seen fit to correct the accounts that he posted in English and Hebrew.

Issacharoff’s account lacks even the smallest reference to the connection between the two events. Apparently he did not care to mention that at the very same spot where he had his “near-lynch” experience, two Palestinian youth were killed just 24 hours earlier. Not almost, not a second away from. No, they were simply shot dead. 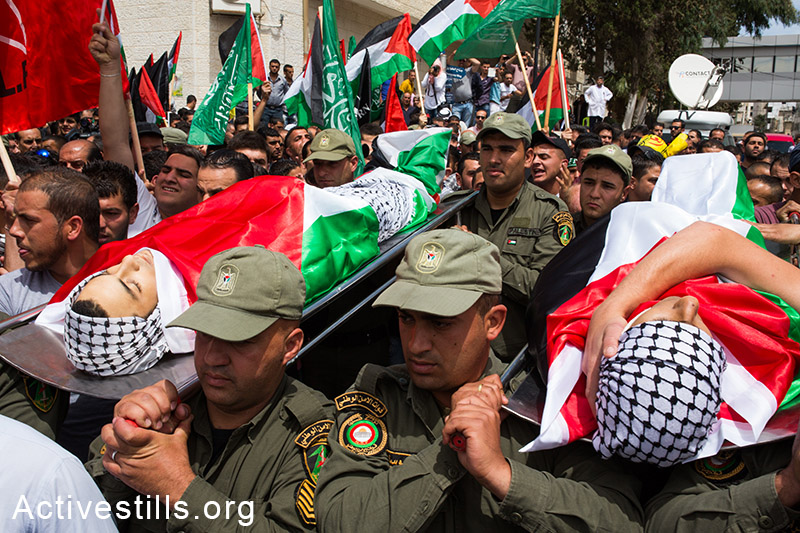 Members of the Palestinian national security forces carry the bodies of Nadim Seeam Abu Kara and Muhammad Abu Da’har during their funeral procession in the West Bank city of Ramallah on May 16, 2014. (Activestills.org)

This sums up Israeli society’s attitude to the lives, rights, and death of Palestinian civilians. For us, the Israeli public, and for the Israeli media that provides us with its version of these incidents, the emotions, feelings, fears, exaggerations and errors that have not been corrected of an Israeli journalist in the occupied territories are a newsworthy event.

Two dead youths, two coffins, two heartbroken families, the youth who carried his injured friend to the ambulance and then collapsed in tears with his shirt soaked with blood; the pain, loss, anger and hate that such crimes foment – all of these do not deserve genuine news coverage. They are undeserved because they happened to Palestinians, meaning they happened beyond the bounds of justice and morality. They happened to an entire people whose blood is expendable. And in our eyes, the lives of their sons and daughters are also expendable.

Lilach Ben-David is a transgender and feminist activist based in Tel Aviv.

Get Our Weekly Newsletter
Before you go…
A lot of work goes into creating articles like the one you just read. +972 Magazine is nonprofit journalism, owned by many of our writers, editors, and journalists. In order to safeguard that independent voice, we are proud to count you, our readers, as our most important supporters. With your support, we can keep +972 Magazine a strong, independent, and sustainable force helping push the global discourse on Israel/Palestine.
DONATE
More About Israeli journalists 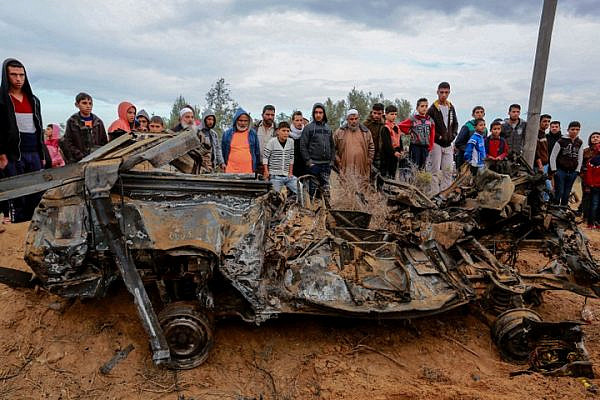 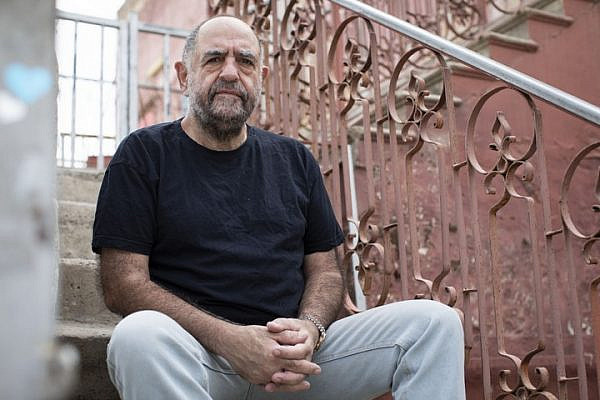 As a journalist, I learned not to believe anything the Israeli army says
In March 1987, Oren Cohen, then a reporter in the occupied territories, received a tip about a female Palestinian detainee who had been tortured and had a miscarriage in prison. Authorities denied she even existed, until Cohen exposed their lies. Today, he says, no one would even care. By Meron Rapoport The film industry loves the press. The investigative journalist,…
By +972 Magazine November 7, 2018 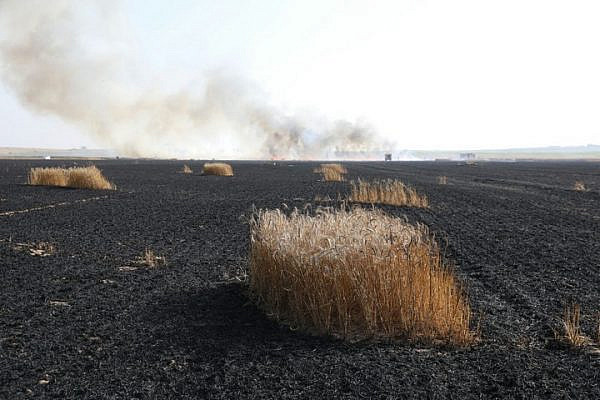 How do Israeli journalists report on a place they can’t reach?
For the past 11 years, Israeli journalists have been forbidden from entering Gaza. This has affected not only their reporting, but also the way fellow Israelis understand what is happening there. By Oren Ziv / Activestills.org The main obstacle that faces anyone who wants to report on what is happening at Gaza protests from the Israeli…
By Oren Ziv May 18, 2018