Stricter trade guidelines, harsher rhetoric and corporate responsibility campaigns all send a clear message: Israel’s closest allies are no longer willing to passively accept the occupation, and the only consensus on settlements is that they are illegal. 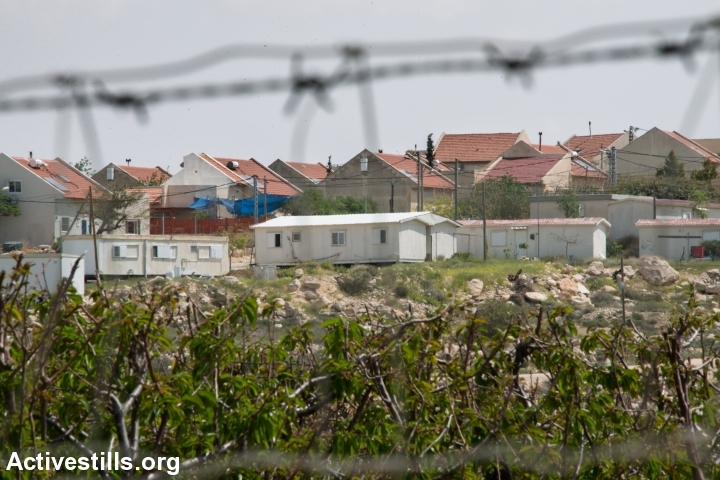 The United States appears to be following the European Union in taking symbolic steps to challenge the aura of normalcy with which Israel has cloaked its settlement enterprise for decades.

United States Customs officials published a notice last week clarifying that U.S. law does not permit goods manufactured in the West Bank, including in Israeli settlements, to be labeled as “made in Israel.”

The regulation is over 20 years old and the notice is just a reminder, the U.S. was quick to point out to journalists who scrambled to draw parallels to the European Union’s settlement labeling guidelines published late last year.

And while there are some significant differences between the two regulations regarding settlement products, primarily that under EU rules settlement goods are ineligible for duty free import, the message is the same.

Israel has never annexed the West Bank (save for East Jerusalem) and no country has ever recognized Israeli claims to the West Bank, East Jerusalem, the Gaza Strip or Golan Heights. Over the past two decades, however, under the cover of various peace processes, the number of Israelis living on occupied land has swelled and swelled to well past 500,000 settlers.

Israeli leaders from across the political spectrum speak of “consensus settlement blocs” as if there is no question that large swaths of the West Bank will remain under Israeli control forever, regardless of whether the Palestinians or anybody else consents. Ministers in the current government openly advocate the unilateral annexation of more than 60 percent of the West Bank.

When it comes to Israel’s economy, financial instruments, national infrastructure, natural resources, and the legal system for Israeli citizens, the Green Line — where Israel ends and Palestine begins as far as the world is concerned— no longer exists. Israel’s civilian hold on the West Bank, like its military regime that rules its Palestinian residents, has become an accomplished fact on the ground. 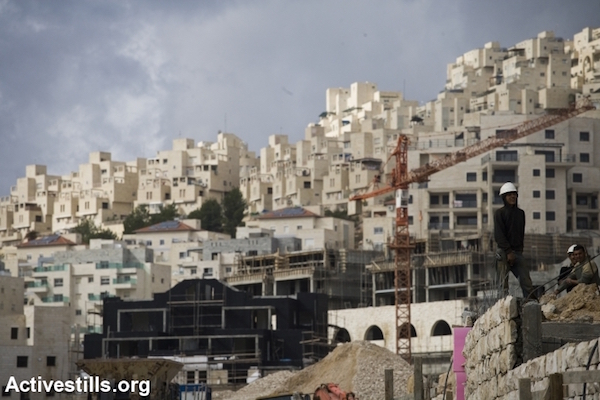 But make no mistake: the matter of settlements is far more serious and consequential than attempts to influence future borders. The very existence of Israeli settlements among the Palestinian population directly results in myriad human rights violations. It has created what can only be described as a system of apartheid, under which two populations living in the exact same space are subject to separate and unequal legal systems.

Over the past year or so, as prospects for a negotiated two-state solution have become less and less imaginable, there is a corresponding growing chorus of international actors who are no longer willing to treat Israel’s settlement enterprise as business as usual.

First there were the EU settlement guidelines reiterating that all agreements with Israel are valid only west of the Green Line, then its labeling guidelines for settlement goods sold in Europe. The governments of Germany, France, Italy, Spain, the UK, and the Netherlands all warned businesses based in their countries to not engage in commercial or financial activity in Israeli settlements.

Part of a burgeoning worldwide movement encouraging corporate social responsibility, a number of companies and investment funds, particularly in Europe, have been quietly reducing their ties with the Israeli settlement enterprise. For some, that has meant pulling out of the Israeli market almost entirely.

Last year, +972 Magazine reported how three Israeli cellular phone companies — including the franchisee of French-owned Orange — had been paying Israeli settlers to build cellular antennas on land the settlers stole from its rightful Palestinian owners. Earlier this month Orange announced that it is ending its brand licensing agreement in all of Israel.

Earlier this month, we reported about how Airbnb allows Israeli settlers to rent their homes to unsuspecting tourists, thereby making the occupation even more profitable. The American company is now the target of a campaign demanding that it stop doing business in the settlements.

Just last week, Human Rights Watch published a report calling on businesses to cease operating in Israeli settlements. The report, “Occupation, Inc.”, aims to demonstrate how businesses operating in settlements harm Palestinians, but also how they strengthen make the occupation itself more sustainable — and profitable.

And now the United States, which regularly expresses its opposition to Israeli settlements with measured statements that rarely ruffle anybody anywhere, has sharpened its approach on two fronts in one week. First, Ambassador Dan Shapiro said in a prominent speech that the U.S. is “perplexed” by continued settlement expansion, which he said, “raises honest questions about Israel’s long-term intentions” regarding a two-state solution.

A few days later, the U.S. reissued a guidance notice on labeling products from the West Bank, which appeared to be a warning about mislabeling of Israeli settlement goods. Pushed on the issue, the State Department clarified that as a matter of policy the United States differentiates between Israel proper and the West Bank.

These clarifications, regulations and corporate responsibility campaigns are subtle. For the most part, they do not constitute anything new — they are almost all reiterations and reminders of long-standing policies and regulations by Israel’s strongest allies. They do not deliver the shock and awe many people have come to expect from BDS, and they will have little immediate impact. Nevertheless, they are meant to send a strong and clear message: the world, including Israel’s closest allies, is no longer willing to passively accept Israel’s permanent military occupation of Palestine, and the only consensus on settlements is that they are illegal. 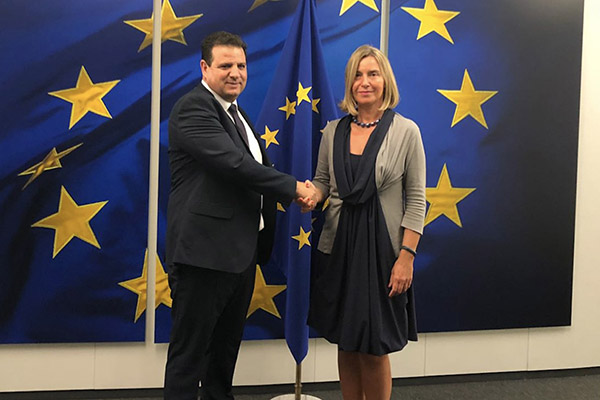 The potential of the Joint List in Brussels
The EU has become effectively paralyzed in its ability to react to and meaningfully impact the Israeli-Palestinian conflict. A recent visit by Arab members of Knesset represents an opportunity for both the EU and civil society in Israel to engage in new ways. By Nimrod Goren The EU quite frequently expresses criticism over Israeli policies…
By +972 Magazine September 16, 2018 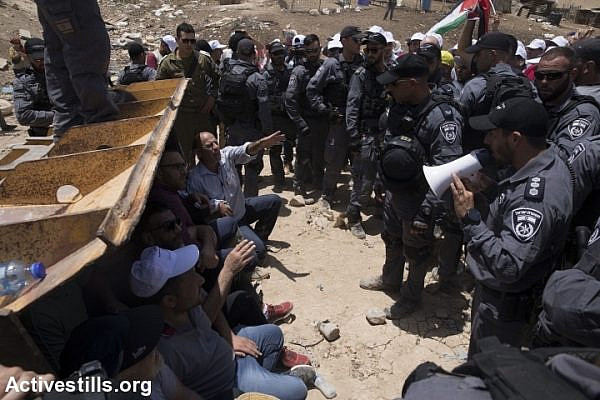 The moment of truth for EU policy on Israel-Palestine
Whether European states follow through on their threats and warnings over the demolition of Khan al-Ahmar will determine a great deal about the EU’s relevance and its ability to influence Israeli policy vis-a-vis the Palestinians. European powers are going to have to make a crucial choice in the coming week. Two months after five EU…
By Michael Schaeffer Omer-Man September 5, 2018 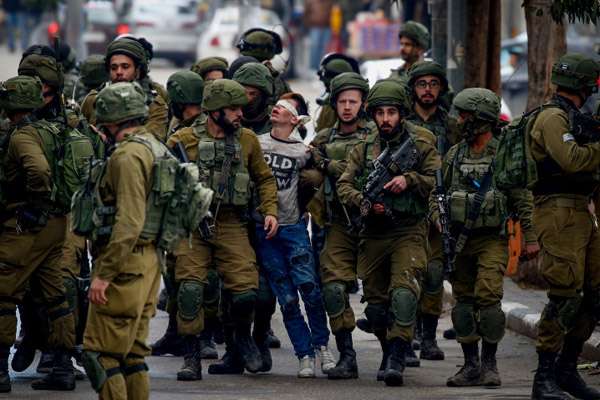 Hiding the occupation doesn’t make it go away
A proposed law, said to be supported by Netanyahu’s government, would criminalize videotaping Israeli soldiers doing the dirty work of the occupation. But hiding something from sight doesn’t make it go away. Or does it? If an Israeli soldier beats a Palestinian and no one is there to catch it on video, did it really…
By Michael Schaeffer Omer-Man June 16, 2018