A new cookbook re-imagines traditional Ashkenazi food, a cuisine that for years was rejected by the children and grandchildren of immigrants from central and eastern Europe. This book is a big step toward correcting that injustice. 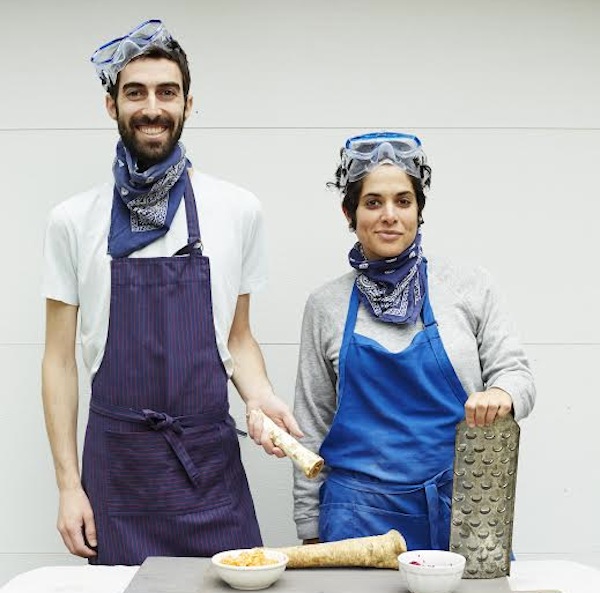 Jeffrey Yoskowitz, who, together with Liz Alpern, co-authored a new cookbook called The Gefilte Manifesto: New Recipes for Old World Jewish Foods, has been on a culinary journey over the past decade. His experience includes a stint in Israel, where he volunteered for a year on a kibbutz that specializes in pig farming. During that period he wrote a witty blog about the conceit of being a vehemently secular American Jewish pig farmer in the holy land who refuses to eat pork for reasons of cultural identity.

Years later, at a cafe in Brooklyn, I asked him why he eschewed pork, since he did not observe any other aspect of Jewish religious law. “Because,” he answered, “Eating pork is for me the red line. After that, I don’t know what defines the identity of a secular Jew.” Jeffrey being Jeffrey — that is to say, a smart and thoughtful listener — he was completely open to a vigorous debate on what defined a secular, or cultural Jew. He was willing to consider that maybe going to Chinatown for moo shoo pork on Christmas Eve was a sort of secular Jewish cultural ritual.

The Gefilte Manifesto is a glorious paean to the cuisine that is such a big part of central European Jewish heritage and identity. It is a re-imagining of traditional Ashkenazi Jewish food, one that is both deeply rooted in the old world and utterly contemporary. Nor is it sentimental. This is not The Fiddler on the Roof Cookbook.

Gently and with humor, Yoskowitz and Alpern present their case for a traditional cuisine that for years was rejected and denigrated, by the children and grandchildren of Jews who emigrated from central and eastern Europe, as unsophisticated, bland, too “brown,” too fatty and generally unhealthy. These characterizations beg the question, of course: how did generations of Ashkenazi Jews survive for centuries on tasteless, unhealthy food? And what in the world were our grandparents nostalgic for?

The answer, of course, is that something got lost in in translation during the process of uprooting themselves from the old country and resettling in the new. Jewish European cuisine got a very bad rap, and this cookbook is a big step toward correcting that injustice.

The Gefilte Manifesto includes several essays by Alpern and Yoskowitz, all written in an engaging first-person style, in which they describe their own culinary journey and how they came to be so passionate about central European Jewish cuisine. Along the way they started a business in Brooklyn called The Gefilteria, producing small artisanal batches of gefilte fish made from responsibly sourced fish. They co-hosted Friday night dinners for their friends, with the menu composed of everything from homemade challah and pickles to roasted goose (the latter is one of those traditional delicacies that got lost in the migration process).

They dove deeply into their research, traveling widely and learning about the provenance of dishes that have been all-but forgotten, and experimenting with local ingredients to produce their own versions. As Liz explains in the introduction, she and Jeffrey came to live this traditional cuisine as it was prepared and eaten in the old country. Along the way, they realized that these foods are remarkably flavorful, not to mention “surprisingly modern and relevant.”

The Manifesto includes recipes for familiar dishes like kugel, cholent, matzo ball soup, kreplach and kasha varnishkes. It also has a rich, enticing section on homemade pickling. Pickles are of course an essential part of deli cuisine, but now we know that lacto-fermentatation produces healthy bacteria, which are crucial for digestion. In his introduction to the section on pickles, Jeffrey describes learning to pickle vegetables at a farm in the Berkshires called “Adamah” (land in Hebrew and Yiddish). He is unabashedly passionate on the subject, whether he’s describing how to make a classic Jewish deli half-sour pickled cucumber, or explaining how to make “Ashkenazi kimchi” (it’s a good thing). There are also recipes for all sorts of things made from pickle juice, including cocktails. Yoskowitz freely admits that he’ll “put pickle juice in pretty much anything.”

The recipes for less-familiar dishes might sound familiar to those who have read novels like “Simple Story,” by the Galicia-born Jewish-Israeli writer S.Y. Agnon. Or the novels set in Poland by I.B. and I.J. Singer. Lucy Dawidowicz, in her memoir “From That Place and Time,” about the year she spent in Jewish Vilna from 1938-9, also references these dishes — like sour soup, chilled fruit soup, homemade farmer’s cheese and roasted goose stuffed with apples. These are not the dishes twentieth century American Jews grew up on. They got lost, for various reasons. Yoskowitz and Alpern have found them and re-interpreted them in a way that adheres to their philosophy of “a new approach to old eating.” Like including brussels sprouts in the kasha varnishkes, and like offering a recipe for beet and ginger kvass (the kvass section has a learned introduction that includes a fascinating explanation of why central and eastern Europeans preferred fermented beverages over water).

These days, a falafelization of Jewish cuisine has taken hold in America. At kiddush lunches that follow traditional events like bar mitzvah ceremonies, one sees buffet tables set with bagels, cream cheese, smoked salmon and crudities — alongside rubbery falafel balls and plastic tubs of beige, industrial hummus. It’s an odd thing, but Ashkenazi American Jews who never lived in the Middle East have somehow come to believe that falafel and hummus are part of their cuisine. The food of their great grandparents has been forgotten or ignored. Jewish teenagers don’t feel the Proustian effect when they bite into a piece of kugel or take a sip of borscht. Liz Alpern and Jeffrey Yoskowitz, two passionate cooks in their early 30s, have in a way, lovingly rescued the culinary heritage of the Jews of Europe. And the recipes are keeping me busy (and happy) in the kitchen.