With a naive tone, jovial denial of the existence of Palestinians and winsome depiction of settlers and life in the West Bank, Israel’s settlement lobby creates an illustrated guide to hasbaraland. 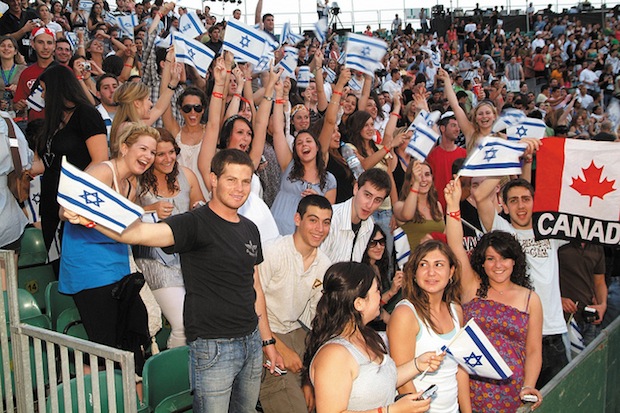 “Occupation, shmoccupation!” declares a new booklet published by the Yesha Council, the lobbying and political arm of West Bank settlements.

Titled “Kibush kishkush” (which translates more literally as “occupation nonsense”), the pamphlet states its professed aim of addressing “misconceptions about settlements and the settler public in Judea and Samaria.”

The front cover features a paintbrush resting on a map of Greater Israel – i.e. the current territory of the State of Israel along with the occupied Palestinian territories – as an undivided landmass. (One wonders which side has been painted over.)

Inside, we meet our guide — a naive, curious young man who is our eyes and ears in this pamphlet. Through his guileless questions, we are led on colorful tour of some of hasbara’s main talking points. 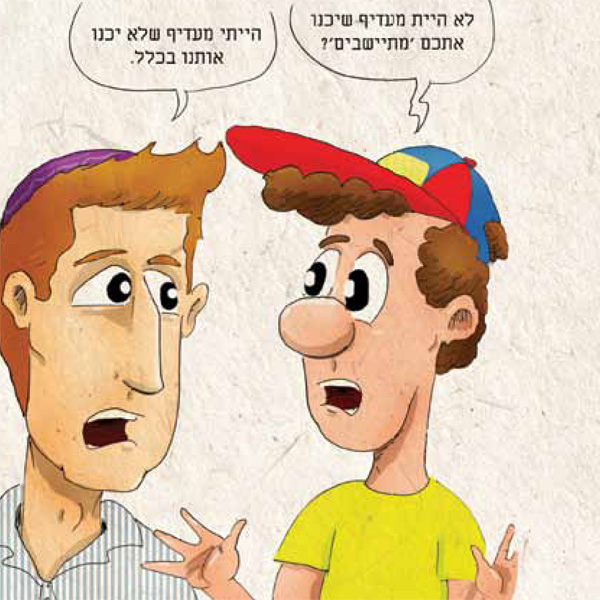 We hear about how Judea, Samaria and Gaza were “liberated” by the Israeli army in 1967, before being cheerfully told that there is no such thing as a Palestinian people. Rather, the entire concept is an erroneous hangover from the Hellenistic period during which the Greeks called Israel “Palestina.”

In fact, we are told, the term “Palestinians” is just a nickname for Arabs who live in Judea and Samaria — which handily differentiates them from Arabs who live on the other side of the Green Line and who are actually Israeli citizens.

In perhaps its most (unwittingly) telling aside, the booklet does acknowledge that “some Israeli Arabs define themselves as Palestinians,” but quickly dismisses this as “another matter.”

It is indeed another matter, one of Palestinian national history and collective consciousness, which throws a wrench in the works of the field of dreams the booklet is attempting to portray. After all, the West Bank is Israel’s world — Palestinians just live in it.

In one pastoral scene, a Palestinian squats under an olive tree with a pair of shears while, bizarrely, refusing help from our guide in case he gets into trouble with “leftist organizations.” We have arrived at the elephant in the room: “price tag” attacks. 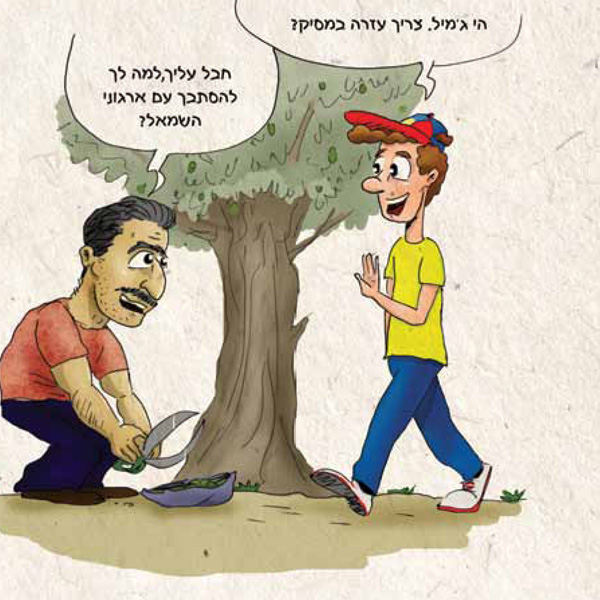 “Hi Jamil. Do you need any help with the olive harvest?”
“Don’t bother, why get in trouble with the leftist organizations?”

Presumably with an eye on the recent triple homicide in Duma and the intense scrutiny of “Jewish terrorism” brought about by the arson attack, the booklet blames Israeli left-wing organizations for provocation and lying regarding such crimes.

While grudgingly admitting that a handful of extremists are to be found in the West Bank, the booklet emphasizes that “price tag” attacks are not a daily occurrence as the Israeli public has been led to believe by those interfering leftist outfits.

Data released by the Palestinian Liberation Organization paints a very different picture, noting that 369 such attacks took place between January 1st and July 27th of this year. The U.S. State Department logged 399 settler crimes against Palestinians during 2013.

Yet the Yesha council is not deterred by trifles such as facts and figures. Rather, it goes on to suggest that in some cases “price tag” attacks are in fact the result of internal disputes between Palestinians.

Finally, the booklet trots through Israel’s well-worn PR coup de grâce – that “every attempt to give the Arabs land led us to terror attacks and violence.” The conclusion is that “new thinking” is required, which amounts to maintaining the status quo and not, heaven forbid, ending the occupation and addressing the Palestinian refugee issue.

Under the current arrangement, apparently, “the Arabs of Judea and Samaria manage their lives independently with elections and a civil administration.” (The army’s own Civil Administration, which is essentially the government ministry for the occupation, is not mentioned.)

What’s more, we’re assured, Israel is actually actively working to improve the lives of Palestinians in the West Bank.

But then there’s no need to explain: this is hasbaraland, possessed of its own internal logic (or lack thereof) and a boisterous disregard for things like context, empathy and international law.

Here there is no occupation, no apartheid and no competing claims for land. Indeed, how could there be when there isn’t even such a thing as Palestinians?