What we can learn from the arrest of a well-known Palestinian activist’s wife. 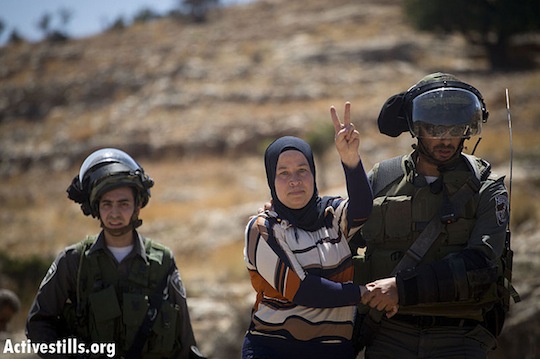 Nariman Tamimi was due to stand trial today at Ofer Military Prison for a rare charge: violating a closed military zone order. Nariman was arrested in her own village during an unarmed protest, in which not even one stone was thrown. When she was brought before a military judge, it was proved – through video evidence – that she never even resisted her arrest as the army previously claimed. Yet the military prosecution insisted on proceeding with the case.

You can read Mairav Zonszein’s report of the affair here. Despite the light and even absurd charges against Nariman – violating a closed military zone order in one’s own land – the regional military prosecutor himself, Lt.-Col. Maurice Hirsch, represented the prosecution at one of the court sessions, highlighting the gravity the IDF attached to this matter.

What’s the special interest for the army in this case? The definition of a closed military zone in the West Bank is pretty arbitrary and people violate the orders every day. But Nariman is the wife of a well-known Palestinian activist, and one possible explanation has to do with the unifying logic of the IDF’s actions vis-à-vis the Palestinian population in the occupied territory.

The occupation is about control. People often miss that. There are many barbaric and violent moments in the West Bank and even more so in Gaza, but as a whole, Israel is not attempting to exterminate the entire Palestinian population, nor does it currently seek to drive them all out of the territory it controls. Such actions would not be tolerated by the international community, and many Israelis would object them too.

Instead, all of the agencies who deal with the Palestinian population, primarily the army and the internal security services, are looking for the most effective ways to control the population and prevent all forms of resistance.

The methods they use are extremely diverse and they change from place to place and from one period of time to another. Checkpoints or crowd control measures are the most obvious ways. A network of informers and collaborators is another. Handing some privileges to a local and national leadership is another such method. Israeli representatives often take pride in the asylum Israel has granted to some Palestinian gays, but sexual orientation is also used for control, and internal security operatives have been known to blackmail Palestinian gays, threatening that they will expose their identity if they don’t provide information. And so on.

One of the most important aspects of control, which is hardly ever discussed, is the complicated system of permits Israel uses. You need an army permit to travel outside the West Bank, to cross the border to Jordan, to export and import certain goods, to build roads and plant trees, to dig water wells in certain areas, to work in a settlement, to work in Israel, to study abroad, to visit relatives in Gaza, and so on (check out this visual presentation of permit system). Recently, I went with another Israeli friend to cover the weekly protest in a Palestinian village. Not many of the villagers participated in it. In the village square, my friend met a local carpenter he knew. The carpenter is very careful not to be spotted protesting. He has a work permit in a settlement – the very same one that sits on the village’s land, and which is the cause of the weekly demonstration.

The system of control later becomes that ultimate justification for whatever violent action Israel takes against the Palestinians because Israel always gets to operate as the force of peace and order, while the Palestinians become the instigators of chaos and violence. This way, the debate on the occupation is always construed in a way that serves the Israeli interest.

Whatever violent action Israel undertakes against the Palestinian population is justified with something “they did” – a protest, a terror plot, a road block and so on. In the 70s and 80s, when general strikes where a common feature in the Palestinian opposition to the occupation, the army imprisoned local leaders for years under administrative detention, expelled activists and forced merchants to open their shops. When schools and universities mobilized, the army shut them down. Later the IDF moved to act with the same degree of resilience and determination against the mass demonstrations, stone throwing, suicide bombings, rocket launching, and whatever other acts the Palestinian used in their attempt to defeat the occupation. The bottom line is that every opposition to the occupation is forbidden, in the name of peace and stability.

The same logic, by the way, is used against the Palestinians’ diplomatic moves – what Israel now calls “diplomatic terrorism” – and civil society boycott campaign. Effective resistance is always forbidden. Politicians and activists are always viewed as “a threat to peace“ or “instigators,” and they are always blamed with “harming the interests of their own people” due to the catastrophes they bring upon them, in the form of IDF retaliation, of course. The international community, it should be noted, is extremely welcoming to such arguments, since order is always viewed as preferable to chaos, especially in the Middle East, and especially these days.

In Nariman Tamimi’s village, Nabi Saleh, a couple of Palestinians already died during the protests. The army blames the protesters for their own deaths.

Tamimi’s own arrest was the fifth time she has been taken into custody. A mother of four and and a known activist herself, she was held blindfolded and handcuffed for nine hours – standard procedure – before spending nearly four days in prison. When she was finally brought before a (military) judge, Military Prosecutor Maj. Gilad Peretz acknowledged that one reason for requesting her continued remand was to keep her from participating in the weekly demonstrations at her village.

Nariman was lucky. The court decided to put her under house arrest on Fridays instead, thus releasing her from prison but still preventing her from participating in the protests.