Imagine a Middle Eastern democracy not based on negation of the Middle East; one which embraces the Mizrahi Jew, woman and the Arab, the Muslim and the Christian, granting Judaism a truly safe haven, a living space in which the memory of annihilation does not become a concrete, imminent threat.

An excerpt from The One-State Condition: Occupation and Democracy in Israel/Palestine.

By Ariella Azoulay and Adi Ophir

Imagine a state whose residents have learned to speak to one another in civilian. Imagine a regime which does not classify populations according to ethnicity, religion, and nationality. Imagine a regime that has neutralized the lethal meaning of categories such as “refugees,” “stateless,” “illegal aliens,” “migrant (or foreign) workers,” and strives to uproot them from its political lexicon. Imagine a regime which regards the speedy naturalization of people whose bodies were nailed by such categories as a condition for preservation of the political sphere and a key to its existence as a space shared by and open to all governed subjects. Imagine a state where male and female “citizens” do not regard their citizenship as a mere resource and a privilege granted them by the regime which acknowledges them as such, so that they may defend themselves from the long arms of the government. Imagine a state whose inhabitants regard citizenship as a form of belonging and partnership, and as a resource which may spawn a decent as well as meaningful coexistence whose outlines are being constantly redrawn. 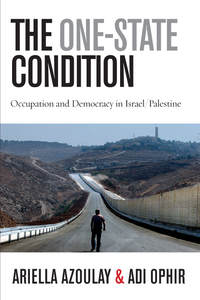 In order to envision such a regime, one must overcome three major characteristics typical of the heritage of modern democracy: the conception of the state as a closed, given entity which dictates the boundaries of the political system and sustains relations with similarly closed entities in the international arena; a national-political sovereignty judged by its military might and compelled to produce military force and use it from time to time to ensure its survival; the generation and maintenance of “a backyard” for anyone whose citizenship is denied or flawed, a backyard in which various excluded and disempowered populations are governed via warped ad hoc solutions for differential management of the population, and incitement of these differentiated group against one another. Once this heritage is discarded, one may imagine the state as a given product for changing relationships and struggles, rather than as their a priori frame. One may also acknowledge the necessity of the use of force and the regime’s obligation to regulate this use without introducing sovereignty as a possible purpose of military force. In short, imagine a regime that adopts the rudiments of Arendt’s philosophy, and in every sense belongs to all the governed, operating for and never against them; a regime whose organizing principle for the existence of the political space is a concern for the common universe of all the governed. Imagine a regime where the foremost question is: Who are all the governed? Who are those entitled to benefit from the government and liable to be hurt by it; a regime where the answer to this question is never presumed a priori, but rather examined each time anew, and continuously.

In such a regime, nationality is distinguished from the state, as religion was, in a manner which prevents nationality from corrupting or from becoming a power-minded instrument, an engine for nonredeemable acts of state. In such a regime, nationality serves as a resource and as a space for moral, civilian human culture. It furnishes interested individuals with a depth of heritage and tradition, and a basis for family relations, yet ones which do not force themselves, nor form a pillory for human ties and a muzzle for the political imagination. Imagine a regime which enables religions to flourish and different nationalities to thrive for anyone desiring them; a regime which sponsors and safeguards all forms of partial partnerships and all human groupings within its bounds as long as they do not threaten the universal co-existence of all which it promotes. In such a regime the authorities grant equal treatment, on principle, to all religions and nationalities, to all classes and associations, as long as they do not demand a monopoly for themselves over the shared state apparatuses entrusted with guaranteeing plurality. Imagine a situation in which civilian solidarity restrains the market forces, not only the forces of nationalism and fundamentalism, and grants the impoverished and disempowered a safety net which guarantees their dignified existence and provides them with opportunities to deliver themselves from the inferior position to which they have chanced. Imagine a state in which people are not poor, nor abandoned, and are not crime-prone due to their ethnic origin or the locality from which they hail, but only due to circumstances which even the state’s fair support cannot prevent.

Imagine a state in which individuals other than white males no longer have to fight for their status, and their achievements in the struggle for equality are no longer questioned or denied them repeatedly. Imagine a regime in which the injustices inflicted upon these individuals in the course of history have been uprooted from the common sphere, and are now placed in showcases as museum exhibits for perusal and study. Imagine a state in which the school curricula are written by the previously oppressed, and the past is retold and re-classified according to the urgency in providing a voice to those silenced before. Imagine a place in which people rediscover their shared past in order to imagine a future for themselves which will disallow the return to the regime that had rendered them enemies.

Imagine a Middle Eastern democracy not based on negation of the Middle East; one which embraces the Mizrahi Jew, woman and the Arab, the Muslim and the Christian, granting Judaism a truly safe haven, without nuclear weapons and nationalistic aggression, chemical warheads and mobilization orders, a living space in which the memory of annihilation does not become a concrete, imminent threat. Imagine a regime which seeks partners to its own disarmament, and is determined to spread the message that military force between enemies is a recipe for disaster, whereas disarmament among partners is a recipe for political and cultural prosperity. Imagine a regime in which the equal partnership in government is a common denominator dictating the manner in which all other differences are preserved and respected. Imagine a regime which works to guarantee its subjects’ worthy subsistence and leisure so that they may participate in and shape public life; a regime that feels threatened when the governed become alienated to their partnership in government and do not take part in the decisions pertaining to their coexistence and the regime’s future. Imagine a regime whose citizens do not regard state power only as a necessary evil, but also, always, as a medium ensuring life, partnership, creation, and an uncompromising struggle against the forces of evil.

Ariella Azoulay is a lecturer at Brown University, a curator and a documentary filmmaker. Adi Ophir teaches Philosophy and Political Theory at the Cohn Institute for the History and Philosophy of Science and Ideas, and is the Director of Research at the Minerva Humanities Center at Tel Aviv University. The One-State Condition: Occupation and Democracy in Israel/Palestine (Stanford University Press) will be out later this month.