It might be the biggest, most expensive and most influential construction project in Israel’s history. To mark the 10th anniversary of its inception, I will be publishing in coming days a series of stories about the separation wall and its history, arguments in favor and against its construction, its effects and side effects and an analysis of its possible implications on regional politics in years to come. Chapter one – the Israeli story of the wall.

Looking at it from here, for just one minute, the whole project of the wall appears to be nothing more than an absurdity. I’m standing at the furthest, deepest part of this massive barrier, in the settlement of Ariel. Located about 20 kilometers east of the green line, less than thirty to the Jordan River, it is the very heart of the West Bank. In front of me I see some olive groves, behind them – the “separation fence” with its electric detection, cameras and barbed wire, and on the other side is the Palestinian village of Marda, the residents of which own these trees. So far, it’s nothing I haven’t seen before.

However, a short walk to either direction leads to an abrupt end to the fence. In one direction it reaches a nearby road, and simply doesn’t continue on the other side, as it does elsewhere. Instead, there is a small area near the road with turned earth, suggesting that construction was planned here but was stopped. Oren, the photographer, tells me he was at a demonstration here against the planned route of the fence five years ago, and that nothing has changed on the terrain since. He takes some pictures, and I think of several other places along the route where the fence or wall simply comes to an end, enabling dozens, hundreds or thousands of Palestinians to cross it on a daily basis. Some are caught by patrols. Others aren’t. Looking at it from here, for just one minute, the whole project of the wall appears to be nothing more than an absurdity.

Twice the length of the green line, more than a fifth not yet built

On April 14, 2002 then Prime Minister Ariel Sharon announced that a separation fence would be built in the West Bank (a matter of terminology: The barrier is part fence, part wall. I will be using the two terms interchangeably). It was the height of the second intifada, which started with mass demonstrations that were murderously repressed by the IDF, and continued with a series of deadly suicide attacks against citizens inside Israel. After the 2002 attack on a Passover dinner in a Netanya hotel, Israel launched operation Defensive Shield, during which some 500 Palestinians were killed, and mass destruction caused to houses and infrastructure across the West Bank. At that point, no planned route or budget existed for Sharon’s fence, announced during the operation. But the project, which was to become probably the largest in Israeli history, was born.

Ten years have passed, and much has changed. The route of the wall was drawn, altered and changed time and time again by both the government and the Supreme Court. Construction went ahead, come to a halt, was restarted and frozen once more – due to political debates on its route, international pressure regarding the annexation of Palestinian lands and lack of funds. Here are a few figures to help get an idea what this project is all about:

The entire route of the wall – between 680-709 kilometers (the first is a Ministry of Defense figure, the second B’Tselem’s). This is more than twice the length of the Green Line, Israel’s recognized border with the West Bank  (320 kms). 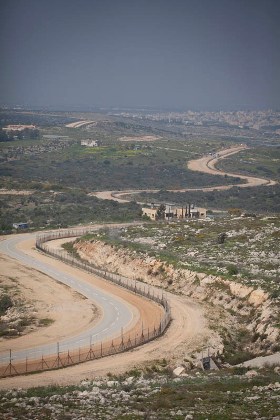 The fence in the Tul Karm area (Oren Ziv / Activestills)

Palestinian lands currently on the Israeli side of the wall – 8.5 percent

Between security and annexation

The idea to build a separation fence or wall in the West Bank was raised several times in the past, but it was not before Sharon’s green light that the concept took shape. “Ehud Barak and others talked about a fence that would serve as a border, and would thus require some kind of a withdrawal and dismantlement of settlements, but this was clearly not an option at a time when suicide bombers were exploding in buses on a regular basis,” says Ilan Tsi’on. In 2001 Tsi’on co- founded “A Fence for Life,” a movement that demanded that the government set up a fence as quickly as possible, one which would not serve as a political border but rather as a security measure. “The point was for construction to start immediately, wherever the government chose, as long as it was between the mass concentrations of Palestinian and Israeli populations. In April 2002, they finally listened.”

The beginning of construction also brought forth the beginning of the struggle against the route of the wall. While Palestinian and international demands that the fence be built on the Green Line will be discussed in subsequent chapters, the main divisions in Israeli society were surrounding just how much West Bank land the route should grab. Settlers were split between those who opposed the fence altogether, fearing that all parts left outside of it would ultimately be handed over to Palestinians, and those who supported a fence deep inside Palestinian land, increasing chances of annexation, and guaranteeing challenges to the peace process. “Of course the fence would also have political implications”, says Tsi’on. “If it was built unilaterally on the Green Line, we would never be offered peace by the Palestinians, who would have felt they had already won. The more land you keep between the fence and the Green Line – the more you can negotiate later.” 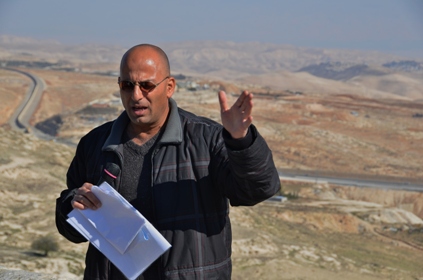 The current official route is more or less the one authorized by the Ehud Olmert government in April 2006, and it corresponds almost exactly with Olmert’s own expectations of a future border as presented in negotiations with the Palestinian Authority. “The Israeli government knowingly chose to plan the route in such a way that was in contrast to security needs,” accuses Colonel (res.) Shaul Arieli, a member of the Council for Peace and Security. “It chose to risk the lives of civilians and soldiers alike, aspiring to reach other goals, mainly those of the settlements, and this is something mostly unknown to the public even though it is a harsh truth already recognized by the High Court. It was right-wing political pressure, among others by then Minister of Finance Benjamin Netanyahu, which left openings in the fence, which allowed for suicide attackers and illegal workers to pass through to this day.”

According to Arieli, who is the co-author of the most important book published about the wall in Israel (“Khoma U’Mekhdal” – “The Wall of Folly”), tensions between rightist annexation plans on one hand, and limitations imposed by the Americans and the High Court on the other, are the reason for the failure to complete construction. Both the Bush and the Obama administrations were strongly opposed to the route of the wall around the Ariel, Qedumim and Mishor Adomim “fingers” (deep extensions into Palestinian territory), while settlers resist what they consider an insufficient route in Gush Etzion (a whole map of the route can be found here – PDF).

Recently, the state promised the High Court, in response to Palestinian petitions, that construction in all of these areas will be stopped until further notice. This is why the fence I saw in Ariel leads nowhere. Arieli: “The heads of the settlement movement realized that the High Court won’t approve an annexing fence in these areas, so they and the government decided to neglect the safety of Israeli citizens, leaving several opening in the fence, and all for political reasons.” 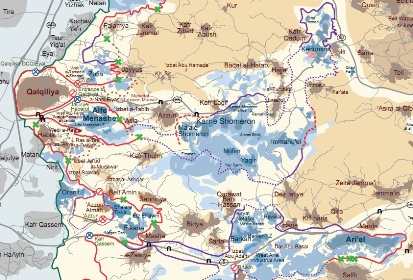 Despite of repeated requests from +972, the Ministry of Defense refused to allow an interview on the wall with any official, and chose to ignore most questions sent to it by e-mail.

Back to Ariel: on that day of touring the wall, one in several that will be described further in this series, I crossed the barrier several times in different locations, sometimes not even noticing I had done so. While most Israelis think the wall has been completed, and that Israelis cannot cross it, Israel keeps maintaining control on both sides of the wall, and citizens can go through it freely, and so can all Jews, as potential citizens. To us – it is transparent. For Palestinians – a disaster. This is a crucial difference, a fact of the unique regime in the West Bank, the details of which shall be presented in chapters to come.

Next chapter: Wall and Peace