Aiden Katri is refusing to be conscripted into the Israeli army because of the occupation and as a feminist statement. The army sent her to a men’s prison. Before heading to prison she wrote: ’It is time for an alliance of the victims of oppression.’ 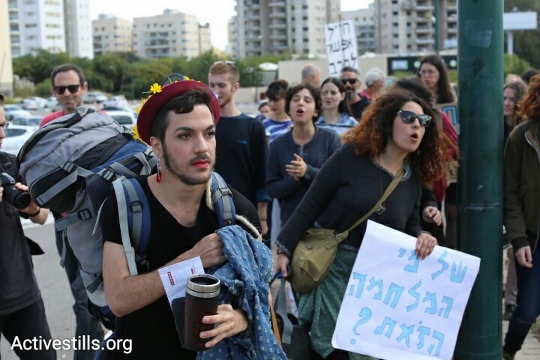 Transgender conscientious objector Aiden Katri was sentenced to military prison on Tuesday, in what activists say is the first time a transgender draft refuser has been imprisoned in Israel.

Katri reported to the IDF’s Tel Hashomer induction base near Tel Aviv Tuesday morning flanked by dozens of supporters. A few hours later, at the conclusion of an army disciplinary trial, she was sentenced to a week in prison for refusing to be conscripted into the army.

Military service is mandatory in Israel for Jews.

Before being sentenced, Katri explained that her actions are driven by a sense of solidarity with Palestinian women living under Israeli military occupation, and the feminist struggle against the discriminatory treatment between men and women in the army itself.

Later that evening, Katri was transferred to the IDF’s Prison 6, a facility for male inmates. IDF officials who spoke on condition of anonymity told +972 and its Hebrew-language site Local Call that the army does not really know what to do with a transgender inmate, and that a various levels of the professional echelon (including the Chief of Staff’s Advisor on Gender Affairs) are involved in tackling the question.

For the purposes of comparison only, the Israel Prison Service, which runs civilian prisons, holds transgender prisoners in isolation — or in other words, in even harsher conditions than others. A High Court of Justice petition challenging that policy is currently pending.

Aiden Katri, 19, was born male and raised in a traditional Jewish family in the Tel Aviv suburb of Holon. Today she identifies as a woman; she has not undergone any physical treatments toward transitioning.

In recent years, she says, she had an awakening of sorts in which she says she understood that all people are equal, which she found to contradict the “chosen people” narrative with which she was raised. 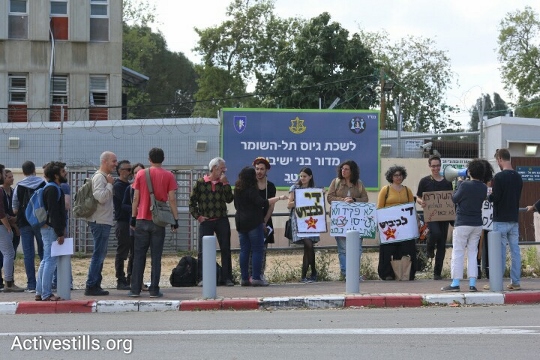 Supporters demonstrate in solidarity with Aiden Katri before she declared her refusal to be conscripted into the Israeli army for reasons of conscientious objection, March 29, 2016. (Oren Ziv/Activestills.org)

In the pre-conscription process Katri actually presented herself as a man to the army and was supposed into be conscripted to a combat unit. As the date approached, however, she decided she could not go through with it. “The problem is that in Israel people see the military as the only moral solution to our problems,” she wrote in a statement explaining her refusal. (More excerpts can be found below).

Another young woman, Tair Kaminer, is also currently being imprisoned for refusing to be conscripted into the Israeli army for reasons of conscientious objection. Kaminer, 20, was sentenced to prison for the fourth time this week, after already serving 75 days in prison.

Conscientious objectors are generally imprisoned for periods of up to one month, after which they are sent home for a weekend or so, and then back to an induction base where the entire process repeats itself. The cycle can go on for many months before the army releases a soldier from mandatory service.

The IDF Spokesperson on Tuesday emphasized that Aiden Katri’s imprisonment has nothing to do with her being transgender, and claimed that the army was not even aware of her gender identification until Tuesday.

Here are a few excerpts from Aiden’s declaration of why she is refusing to enlist:

The military is a patriarchal body that perpetuates for the youth the a-symmetry between men and women. We can see this through gendered roles in the military – gendered roles for women such as a secretary, and those for [men] such as combatants. Serving in the military perpetuate the masculine oppression of young men and women in Israel, as well as the hierarchy within the country leadership as military leader become political leaders as well. I refuse to take part in an organization that makes “masculine” behaviors such as aggression and violence, an entry ticket to the social elite.

As someone who believes in gender equality, I can not ignore inequality in other issues. Arabs and Jews live in this country as two different classes; Israelis and Palestinians live under two different legal systems; It would be absurd to strive for justice in the context of injustice. I struggle against my oppression – my gender oppression as a trans women and my ethnic oppression as a Mizrahi Jew, and if I turn a blind eye to an oppression of another people, this would be hypocrisy.

I went to the Friday protests in the Palestinian village of Bil’in to protest the theft of the village lands for the growth of the neighboring settlement, and I saw the violent suffocating space the children grow up in. When the military does not allow the residents to protest legally, as it shoots tear gas canisters at elders, children, men and women that are trying to protest, I can’t but feel shame. For the soldiers, it would seem almost like a computer game they are playing, but in real life there are real victims.

For these victims I stand and say no! It is time for an alliance of the victims of oppression: chauvinism, ethnic oppression, racism, nationalism. We all suffer from the racism and violence around us, let us stand together and refuse to take part in it.