Following a long period of quiet, the Syrian city of Raqqa is once again being shelled — this time by Assad’s forces. Residents have been forced to flee the shelling, along with IS’s extremist agenda. An interview with a resident of the ‘Islamic State.’

Raqqa, the capital of the “Islamic State” in northern Syria, for the past two months has been forced once again to deal with a devastating phenomenon — indiscriminate bombing by the Syrian Air Force. According to reports from the local coordinating committee, a Syrian air force bombing of a bakery on Saturday took the lives of some 50 people, 35 of them civilians.

Residents of Raqqa have found themselves trapped between the regime’s air strikes, which kill indiscriminately, especially civilians, and the Jihadi organization that is forcing upon them an alien lifestyle and an extremist ideology. In an exclusive interview with +972 Magazine, “Akram” (not his real name), a graduate of Aleppo University and a resident of Raqqa, estimates that between 80 and 90 percent of the city’s residents despise the organization and its actions.

When the regime started bombing them, Raqqa residents “started cursing and swearing at both sides,” Akram explains. “Honestly, people are fed up with all of the sides, even the [Free Syrian Army]. They only want the war to stop. Only a few people are still enthusiastic about the revolution.”

Islamic State (IS), for its part, has moved its commanders out of the city. Akram says that after the bombing of the bakery, he spoke with a Tunisian IS militant who concluded that the fact that only a minority of those killed were IS militants proves that god is on the Islamic State’s side and that the civilians killed were sinners being punished for their corruption.

Video: The aftermath of the bombing in Raqqa on September 6, 2014.

In March of 2013 a coalition of Jihadi, Islamic and secular rebels took control of Raqqa, the first — and only — regional capital to fall into rebel hands. Throughout 2013 IS gradually took control over the city and its management. It suppressed civil society forces that rebelled against it and drove out a group of rebels that had been basing itself in the city. At the beginning of 2014 the Jihadi group’s grip on the city was complete as the result of a number of serious battles against various Syrian rebel groups.

When IS took control of the city forced upon the residents its particularly fanatical interpretation of Sharia law. A large number of Christians and political activists fled the city. Those activists who didn’t flee were arrested, tortured and occasionally executed for resisting the rule of the Islamic State.

As part of its efforts to build the “Islamic State,” the organization is making significant investments in the indoctrination of Raqqa‘s younger generation, which is obliged to study in IS-authorized schools. “I think this is the most dangerous thing facing an entire generation in Raqqa,” Akram says. “It will take a lot of effort for parents to protect their kids from adopting [the Islamic State’s] beliefs.”

“Those guys are monsters. They are self-righteous to a point where they pose next to [severed] heads and bodies thinking it’s something right and that these horrible crimes are justified in Islam,” Akram continues.

Video: Raqqa residents re-erect a cross that IS tore down at a church in the city, along with chants against Assad and in favor of freedom and Muslim-Christian unity, September 2013.

ISIS (“the Islamic State of Iraq and Syria”), or as it is known since June 2014, “the Islamic State,” is the most extremist organization in Syria today. IS was formed in April 2013 after the leader of the organization in Iraq, who was affiliated with Al Qaida, Abu Bakr al-Baghdadi, declared the official merger of the Al Qaida groups in Iraq (“The Islamic State of Iraq”) and Syria (“al-Nusra Front”). The leader of the Nusra Front, Abu Muhammad al-Joulani, rejected the merger, as did Al Qaida leader Ayman al-Zawahiri. The entire IS chain of command and roughly half of its militants are not Syrian — most of them come from Arab states, the Caucasus and small numbers come from the West.

Unlike other militant groups in Syria, IS does not see itself as a militant group but rather as a country, which is reflected in both its name and behavior. More than any other organization, IS is focused on governing and the establishment of an Islamic state that rules over every aspect of life. As a result of its self-perception as a state, IS refuses to partake in arbitration with other militant groups in Syria and therefore, since January 2014, it has been in non-stop conflict with more moderate rebel groups in Syria. Those inter-rebel battles have taken the lives of no fewer than 7,000 militants. 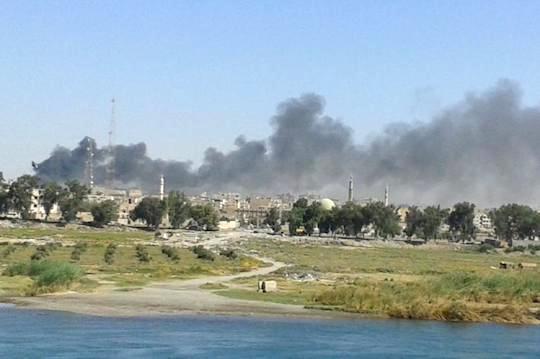 From the very start of the popular uprising in Syria, Assad and his regime described the unarmed protesters as “terrorists.” In order to ensure that reality fell in line with its propaganda, the regime began arresting tens of thousands of activists calling for democracy and who resisted sectarianism. At the same time, it released from prison Jihadists, who in turn began establishing armed groups that adhered to Salafi and Jihadist ideologies, which eventually became IS.

The rise of radical groups in Syria benefited the regime not only by making its propaganda a self-fulfilling prophecy, but also by increasing support for it among religious minorities, the bourgeois and liberals. It should be no surprise, therefore, that the Assad regime consistently refrained from directly fighting IS. The jihadist organization, for its part, preferred to focus on the establishment of an Islamic state and fighting against more moderate rebels and enforcing Sharia on the population under its rule.

“From the time when IS took full control over Raqqa in March [2014], there was only one aerial bombing – 40 days after they arrived,” Akram recalls. “Then there was complete calm.”

In June 2014, with the help of local Sunni tribes and organizations related to the Iraqi Ba’ath party, IS forces took control of large parts of Iraq, including the Sunni cities of Mosul and Tikrit. The IS advance has since been halted as a result of a counter attacks by Shi’ite militias, the Kurdish Peshmerga, the Iraqi Army and the American Air Force.

“Everything changed dramatically [in Raqqa] after IS’s huge advances in Iraq and its capture of Mosul,” Akram explains. “Since then we have witnessed at least 10 air raids a week.”

Why do you think the regime stopped attacking Raqqa after IS took control but continued to attack neighborhoods and cities under more moderate rebel groups’ control?

“I think the regime decided to stop, or lessen its operations against one side once the infighting between other rebels and IS [began]. And because the regime prefers the jihadis over the rebels it decided to cease hostilities against [IS]. More so, the regime found that it shared an objective with IS: fighting the [more moderate] rebels.”

And why is Raqqa under [regime] attack again only now that IS took control of more than one third of Iraq’s territory?

“After the Mosul operation, the regime felt that it was in danger of ‘creating’ a monster [that could hurt it too]. It also wanted the world to see that it was fighting this monster — once it became a threat to the whole region, and not only the [Assad] regime. 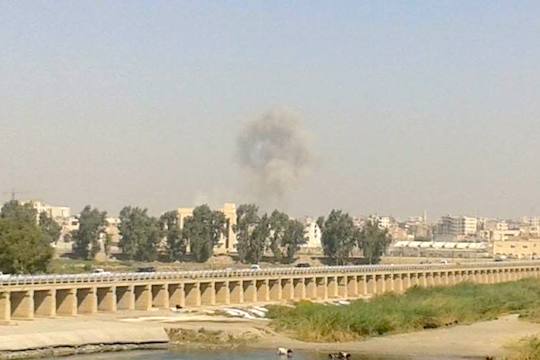 Looking forward, Akram asserts that, “the jihadists are like cancer — once they spread it’s nearly impossible to eradicate them.” In order to get rid of the Islamic State, he continues, the world must work to end the civil war in Syria, admitting that it will likely end in a choice between two hells. But at the end of the day, Akram says, “the world abandoned us.”

Elizabeth Tsurkov works at the Hotline for Refugees and Migrants, an Israeli human rights NGO, and can be followed on Twitter. This post was first published in Hebrew on Local Call.