The recurring elements in the manipulation of public opinion and discourse in wartime also appeared during ‘Protective Edge.’ Shaked Spier brings you the Ten Truths, Ten Commandments and Ten Lies of war. 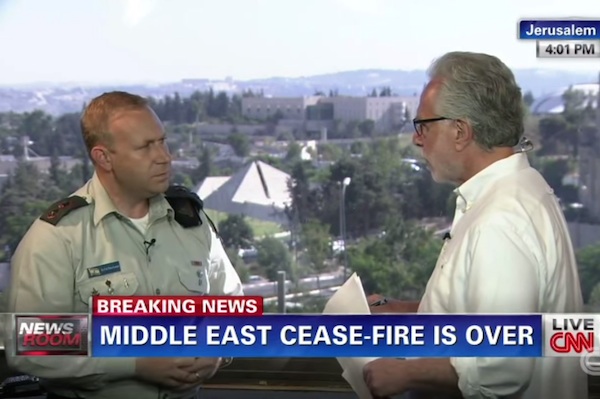 Several truths dominated the hegemonic discourse in Israel during and since “Protective Edge”:

1. Israel doesn’t want war, we only defend ourselves
2. Hamas was solely responsible for this war
3. The Hamas leadership is evil and looks evil
4. Israel is defending a noble cause, not special interests
5. Hamas carries out intentional atrocities; we only make mistakes (“collateral damage”)
6. Hamas uses unlawful weapons
7. Israel suffers few losses, the Palestinians in Gaza suffer many losses
8. Intellectuals and artists support our cause
9. Our cause is sacred
10. Those who doubt our cause and official statements are traitors

Many of these truths accompany us in times of cease-fire as well. However, as the past few months have shown, the public demand to “fall into line” in times of violent escalations strengthens the information and knowledge elite’s control over what is allowed to be said; and consequently – what is allowed to be thought. Such argumentative alignments (at least concerning some of the above-mentioned points) can be observed in places usually considered strongholds of criticism, but which actually constitute part of the Israeli mainstream discourse and media, such as the Haaretz newspaper, and the left-wing Labor and Meretz political parties.

Due to language barriers, my ability to follow and analyze the mainstream discourse and official reporting within the Palestinian society is quite limited. Interviews and reporting in the international press, combined with testimonies of Arabic-speaking friends and activists, allow me to assume similar argumentative lines can be observed among the leadership and institutional press in Gaza (while truth number 7 constitutes an exception, as explained below). 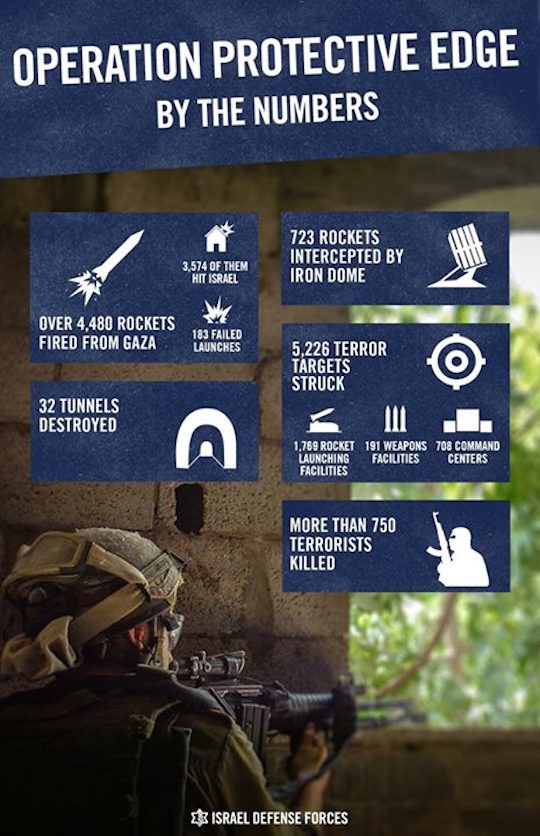 An infographic published on the IDF Spokesperson’s Facebook page.

It appears that the truths of this war and its media representation have not been original at all. Subsequent to World War I (“the great war”, from his temporal perspective), British politician and peace activist Arthur Ponsonby identified in his book, Falsehood in Wartime, the reoccurring elements of manipulation of public opinion. Accordingly, in her book Principles of Propaganda in Wartime, Bulgarian historian Anne Morelli extracted 10 main principles from Ponsonby’s work and examined their constant deployment in various wars from World War II to the Iraq and Yugoslavia wars in the 1990s. She dedicated a chapter to each principle:

1. We do not want war
2. The opposite party alone is guilty of war
3. The enemy is the face of the devil.
4. We defend a noble cause, not our own interest
5. The enemy systematically commits cruelties; our mishaps are involuntary
6. The enemy uses forbidden weapons
7. We suffer small losses, those of the enemy are enormous
8. Artists and intellectuals back our cause
9. Our cause is sacred
10. All who doubt our propaganda, are traitors

Thanks to Ponsonby’s “10 Commandments,” both sides of the war can shed their own responsibility for the failure to achieve their noble causes (eliminating terror / defeating the Zionistic occupier and achieving national independence) – lies 4 and 9 – and blame the other side for the death and destruction that is left behind: after all, the enemy carries out intentional atrocities and uses illegal weapons (launching missiles at civilian targets and digging tunnels into Israeli territory / flattening entire neighborhoods, schools, and hospitals) – lies 5 and 6. On the other hand, lies 1-4 and 8-9 continue to supply the moral ground needed in order to ignore the otherwise obvious symmetry.

Quantitatively and through Israeli eyes, the war’s aftermath with a death toll of more than 2,000 Palestinians and 70 Israelis tends to reinforce lie number 7. However, the losses of war include also its costs and damages to the Israeli economy that are estimated in the billions of dollars; compared with the damage to the economy in Gaza which – due to the ongoing siege – barely existed even prior to Protective Edge. At the same time, the damage to the infrastructure in Gaza is estimated to be more than $7 billion.

Interestingly enough, when it comes to lie number 7, neither the Israeli nor Palestinian discourses are loyal to Ponsonby. On the media front, Hamas and its supporters have learned to deploy the asymmetrical death toll as practical means in the international press as well as the inner-Palestinian discourse. Moreover, given Israel’s military superiority, they need such a high death toll and infrastructure damage in order to declare victory.

Accordingly, the Israeli information and knowledge elites have realized that the sense of loss is crucial for creating public support for violent military actions and creating a distorted representation of the loss’s value. By using the known “us” and “them” rhetoric – whereas “they” don’t value human life and “this is the difference between us and them” – a misrepresentation is created, in which one side (“we”) mourns qualitatively more over quantitative fewer casualties while the other side (“they”) mourns qualitatively less over a significantly higher quantitatively number of casualties.

It is important to note that this does not concern the human/social tendency to mourn more over a loss, a casualty, which is closer to you (i.e., from your own side of a conflict), but rather a cynical attempt to construct and demonstrate moral supremacy over the other side. 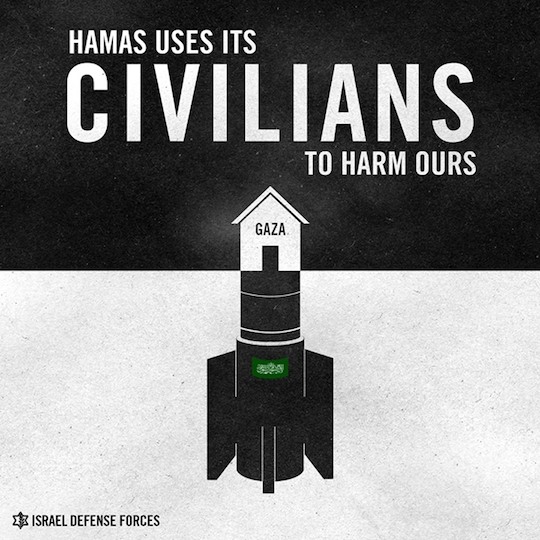 An IDF Spokesperson infographic published on its Facebook page with the caption: “Hamas has no regard for human life”.

On one matter, however, there is unanimity: the other side is always responsible for all losses on both sides – lives as well as damage to property and infrastructure. With all the exposed and analyzed lies, it seems that someone has been reading Ponsonby; reading and memorizing, but not understanding.

In his theory of discourse, Michel Foucault identified the connection between knowledge and power. The knowledge elites hold the power to define the limits of discourse; these limits regard content (what is a legitimate part of the discourse), form (how certain ideas and thoughts are to be expressed), and identity (who is allowed to take part in the discourse). Thus, the limits of the defined discourse operate as mechanisms to control it, namely, to exclude certain content, forms, and subjects (such as individuals, identities, and collectives) from legitimate discourse, to exclude them from centers of power and to exclude them from society.

But who are the information and knowledge elites? Individuals and institutions that are in positions to affect, control, and channel the discourse in a manner that serves their interests (e.g., political and economical interests). Their position as elites does not end in the disproportionate representation of their truths (narratives, opinions, agendas etc.) in discourse, but rather their ability to transform knowledge into power and vice versa – their ability to form discourse, its limits and legitimacy. Examples in the Israeli context are the IDF Spokesman, military censor and officials in the national security sector; Sheldon Adelson, the Mozes and Shoken families; or political personas and institutions, which are able within a stroke of pen to shift the center of public discourse or to politically and economically suppress voices of criticism, as Prime Minister Benjamin Netanyahu does, for example.

As we have witnessed in the past weeks, Ponsonby’s last lie serves as a social control mechanism to enforce the other lies and control the limits of legitimate discourse. Those who refuse to align with those lies, those who dare to doubt or criticize, are declared as traitors. Their legitimacy in the Israeli hegemonic discourse is denied. The result: public voices calling to send the traitors to Gaza, boycott artists and businesses, demands to revoke their citizenship on charges of “lack of loyalty to the state in times of war,” institutional hostility and violent attacks by citizens.

The first victims of this last violent escalation were Eyal, Gilad, Naftali and Mohammed. Together with them the truth was sacrificed as well and lies took their place. Lies such as the conning of the Israeli public by terming the IDF operation “Shuvu Achim” (literally, “Return, Brothers,” or as the IDF translated it, “Brother’s Keeper”) while the Israeli leadership was already aware of their deaths; or the rumors regarding Mohammed Abu Khedir’s sexual preference and the identity of his murderers.

Now that a temporary cease-fire has been achieved and before the next round of violence and lies, we will continue to hear the Ten Truths, the Ten Commandments and the Ten Lies. It is time to sacrifice the illusion of absolute truth in order to acknowledge the other side’s truth – this statement applies for both Israelis and Palestinians – as equal to ours.

It is time for the truth to be the last, and not the first casualty of war.

Related:
Were Gaza tunnels built to harm Israeli civilians?
Palestinian teen: I was used as a human shield in Gaza
Short-term memory loss champions of the world: Gaza? What Gaza?

emailemail
Before you go…
A lot of work goes into creating articles like the one you just read. +972 Magazine is nonprofit journalism, owned by many of our writers, editors, and journalists. In order to safeguard that independent voice, we are proud to count you, our readers, as our most important supporters. With your support, we can keep +972 Magazine a strong, independent, and sustainable force helping push the global discourse on Israel/Palestine.
DONATE
More About propaganda

How the IDF is tarnishing the name of the medic it killed in Gaza
The IDF Spokesperson’s Unit published a video it claims shows Razan al-Najjar throwing a tear gas canister into an open field and professing to be a ‘human shield’ — as if that justifies her killing.  By Yael Marom “Razan al-Najjar is no angel of mercy,” tweeted IDF Arabic Spokesman Avichay Adraee on Thursday. Attached to Adraee’s defamatory tweet…
By +972 Magazine June 8, 2018 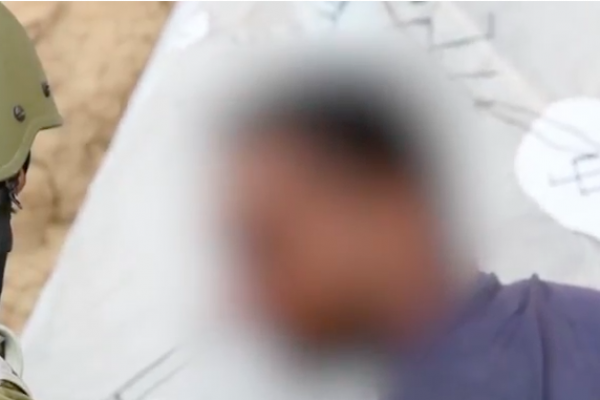