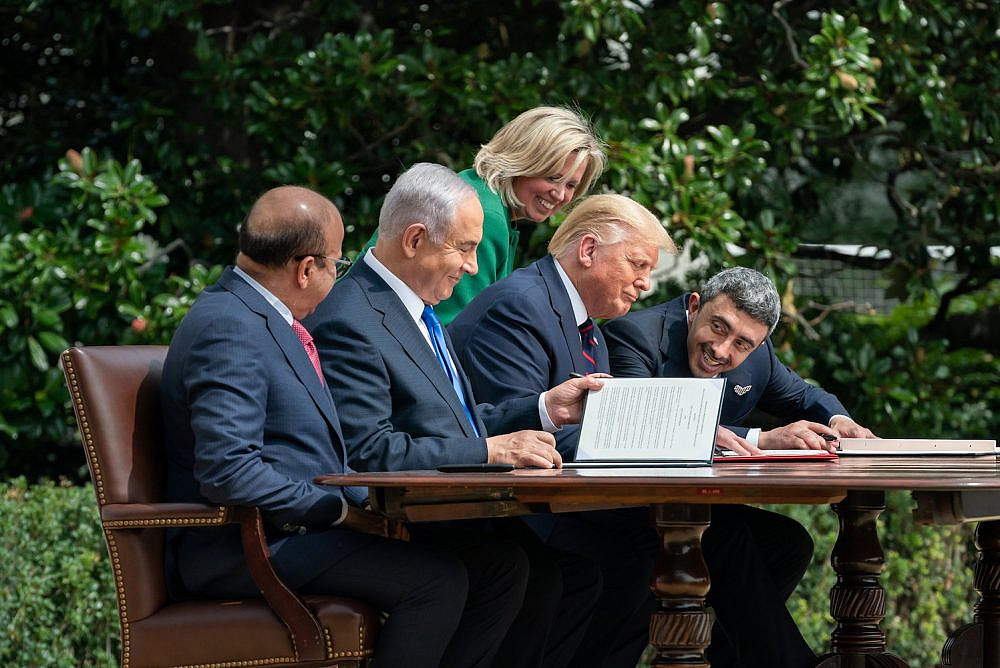 On Tuesday, U.S. President Donald Trump, with much fanfare, hosted a ceremony for the signing of the so-called peace agreements between Israel, the United Arab Emirates, and Bahrain. With smug smiles plastered on their faces, Israeli Prime Minister Benjamin Netanyahu, Emirati Foreign Minister Sheikh Abdullah bin Zayed Al Nahyan, and Foreign Minister of Bahrain Abdullatif Al Zayani together hailed the dawn of a new period in the region. According to the poetically-titled Abraham Accords, the aforementioned heads of state and their representatives will work together to achieve a “stable, peaceful and prosperous” Middle East.

Peace and prosperity, uttered in the same breath as if they were a single term, were indeed the keywords of the ceremony and of the years-long process spearheaded by Trump’s senior advisor and son-in-law, Jared Kushner. Kushner is no neutral broker: he sits on the board of his parents’ foundation, which has funded programs in the Israeli settlement of Beit El.

Much has been said about this alleged peace treaty. It is mostly a strategic realignment of these countries against Iran and a blueprint for increasing authoritarianism in the region, which follows decades of clandestine relations and sharing of intelligence between Israel and the UAE.

Yet the accords remain a fiction — the fever dream of dictators. In the seven-page document, far-reaching issues such as the peaceful uses of outer space are repeatedly mentioned, but one would be hard-pressed to find any mention of Palestine. It only appears as half of an infamous adjective, when the text refers to the so-called Israeli-Palestinian conflict.

The rest of the agreement reads like a business proposal for cooperation between accelerationist theocracies that believe in colonizing Mars and the historicity of Abraham — but certainly not in the Palestinians’ right to self-determination, freedom or dignity. That erasure is an attempt to hasten the disappearance of Palestinians as a polity, a territory, and a nation.

In the text, one character steals the limelight: the eponymous patriarch Abraham, who is referred to here as if he had really existed, and whose bountiful seed spawned all those present at the ceremony. “The Parties undertake to foster mutual understanding, respect, co-existence and a culture of peace between their societies in the spirit of their common ancestor, Abraham,” the document reads, as if peace could only occur between those who shared a common ancestry. This betrays the signatories’ exclusive, wildly ethnocentric vision of what a just world should look like. 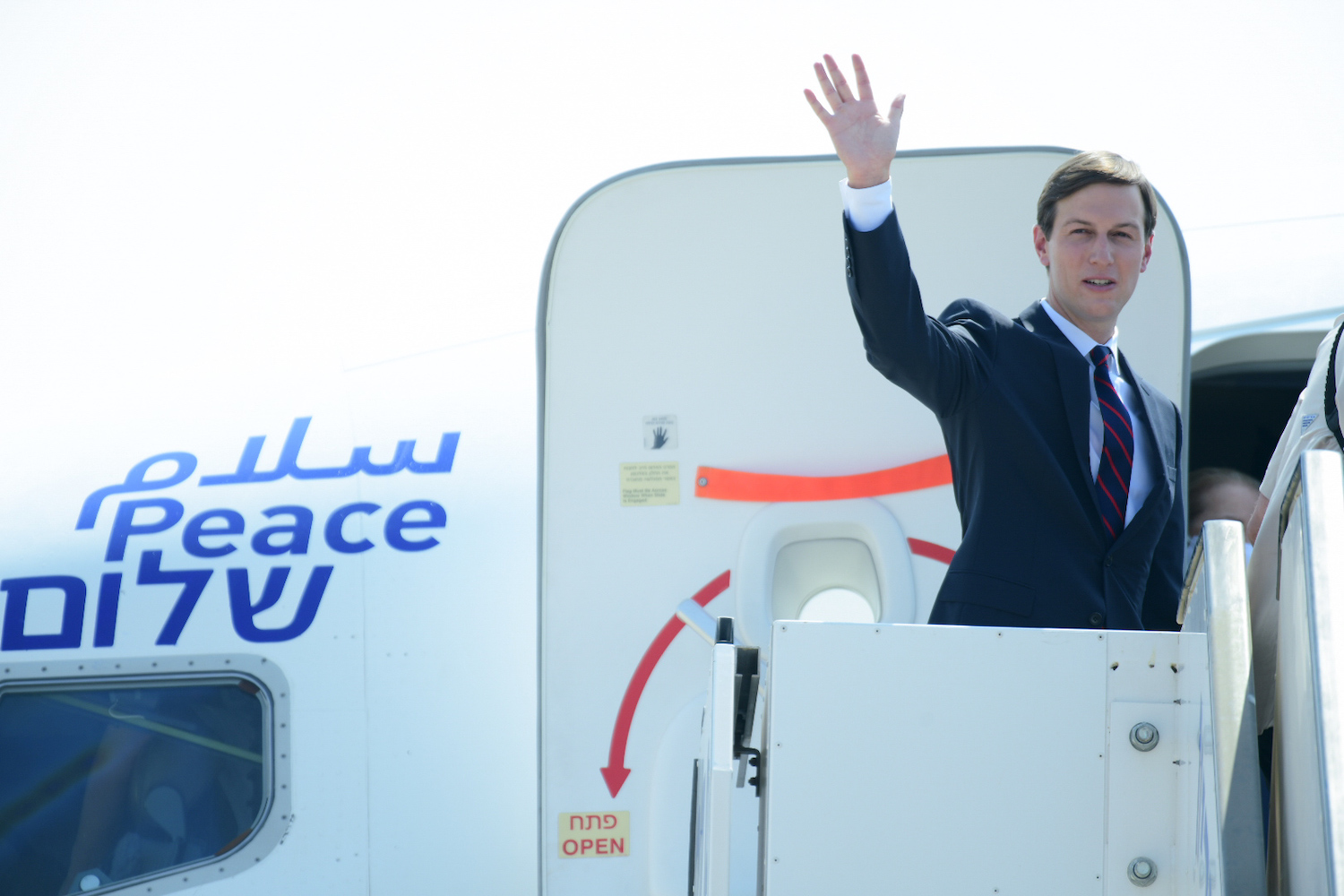 U.S. Presidential Adviser Jared Kushner seen ahead of his departure with U.S.-Israeli delegation from Tel Aviv to Abu Dhabi, at the Ben-Gurion Airport near Tel Aviv, August 31, 2020. (Tomer Neuberg/Flash90

This wouldn’t be the first time that Abraham is used as an ecumenical symbol. It is a vapid but efficient strategy that requires expunging the Biblical text from its darker elements and flattening our geopolitical realities’ ugly, jagged edges.

According to various religious sources, Abraham left his homeland to become a sojourner in a land promised to him by a god. In its brightest interpretations, Abraham’s story is that of exile coalescing into promise; of belonging that blooms into becoming; of ossified identities surrendering themselves to defiant and vibrant futures. At its darkest, however, Abraham is an embodiment of religious dogma and obscurity; of patriarchy and enslavement; of violence visited upon innocent children because of blind faith; of the first colonizer, leaving the land of his fathers to settle another’s land. In short, everything the oppressive regimes that signed the accords believe in and thrive by.

On Tuesday, we were afforded the spectacle of religious extremists signing a futuristic manifesto for zealots. Religious extremists, by definition, attempt to force the world into the shape of their beliefs, often by twisting language and resorting to violence. The Abraham Accords thus endorse an ethnoreligious worldview, according to which — though without verifiable evidence — the Jewish people are descendants of Isaac and the Arabs are descendants of Ishmael, half-brothers now reunited after centuries of estrangement, thanks to the efforts of real-estate developer Jared Kushner and business magnate Donald Trump.

A world neatly divided into clear-cut ethnicities and religions (which, here, are the same thing) is sure to please Trump’s pro-Israel Evangelical base and Netanyahu’s right-wing voters. It’s an updated version of extremism, enhanced with talk of pioneering technology and techno-optimism to suit the dictatorial city-states of the Gulf and the unhinged colonialism of Israeli society, without shaking their respective bedrocks of religious identity and exclusionary politics.

Here, as often is the case with religious extremists, organized faith is an essential and coercive component of identity, rather than a series of acts and beliefs that can be reinvented, enriched, and liberating. Here, much like in Israel proper and in most Gulf states, there is no place for those who exist in liminal spaces and those whose labels are slightly more complicated. In the far-right hellscape drawn by this new axis, there is no place for Arab Jews, in their diversity, or Arab Christians, or Muslims who are not Arabs, or agnostics, or any other possible combination of faith, lack thereof, and communities that flourish across our region. 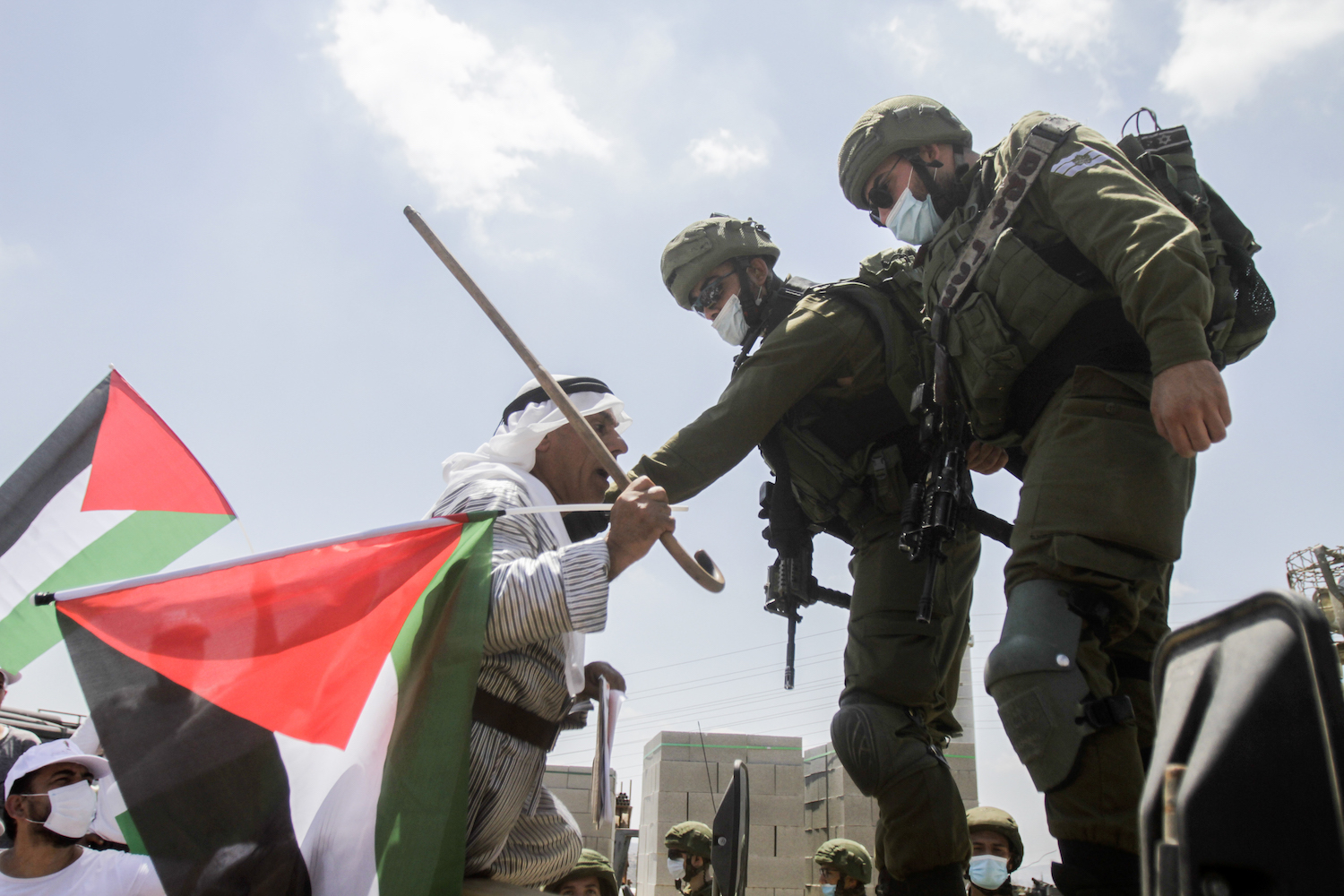 Palestinians protest against the deal between Israel and the UAE in the village of Haris, near the West Bank city of Nablus, August 14, 2020. (Nasser Ishtayeh/Flash90)

One shouldn’t be fooled into thinking that the biggest scandal on Sept. 15 was the normalization of relations between the UAE, Bahrain, and Israel. This would be falling into the trap of pan-Arabism, whose failures and crimes need no demonstration any more. Those who expected the oppressive Gulf regimes to support Palestinian rights were willfully naïve. The UAE and Bahrain did not betray Palestine, nor did they stab us in the back. They were never allies to begin with. Much like Israel, they were built on the corpses, and through the labor, of Palestinians and other oppressed groups.

The Abraham Accords are an alliance of repression. What was signed on is a shared worldview, violent, dark, and tribal, where peace cannot be an earth-shattering, future-altering reality. Peace, to the signatories of these accords, means squashing the voices of the people. It is merely a synonym to the “unlocking” (a favored word of the treaty and of Trump’s “Deal of the Century”) of the potential for free, unfettered exchanges of technology, finance, and weapons.

Palestine, an unfortunate collateral damage of these accords, represents a rebellious and dangerous future. This, beyond any other ideological claims, is why they have rejected it to the margins of this text, and of their worlds.

Karim Kattan is a writer and Ph.D. candidate based in Bethlehem. His first collection of short stories, Préliminaires pour un verger futur, was published in 2017.