The number of Palestinian children killed in 2014 was the third-highest of all situations the UN monitored — after Afghanistan and Iraq. Israel and Hamas are left off a list of rights-violating states and groups, allegedly as a result of political pressure. 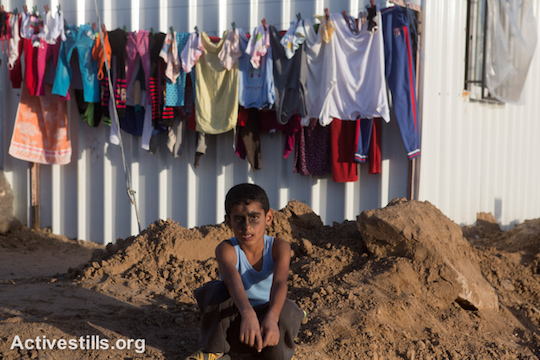 A Palestinian child with ash on his face sits in one of the newly established camps with metal caravan shelters for displaced people in the village of Khuza’a, eastern Gaza Strip, November 9, 2014. (photo: Activestills.org)

Secretary-General Ban Ki-moon took a last-minute decision to leave Israel off the UN’s annual list of states and groups that gravely violate children’s rights this week. Ban reportedly removed Israel from the list, which forms an annex to the Report of the Secretary-General on Children and Armed Conflict (CAAC), as a result of diplomatic pressure from the U.S., including its UN Ambassador, Samantha Power.

Israel, along with Hamas, which was also removed from the final list, had originally been recommended for inclusion by the special representative of the secretary-general for children and armed conflict, Leila Zerrougi.

An advance copy of the report, provided by the NGO Defence for Children International – Palestine (DCIP), details the catastrophic price paid by children during 2014 as a result of the Palestinian-Israeli conflict. A total of 561 children were killed over the course of the year, 557 of them Palestinian — the vast majority of whom lost their lives during the Gaza war. According to the report, almost 3,000 Palestinian children were injured during the 50-day conflict, around 1,000 of whom will be left permanently disabled. The UN document also notes the mental health crisis afflicting Gaza’s children as a result of the most recent war, along with the cumulative effects of previous assaults on the Gaza Strip and the ongoing siege.

The report covers attacks on schools in Gaza in 2014, noting that at least 262 schools were damaged by Israeli airstrikes during the summer war, including three public schools that were destroyed entirely and 23 that were “severely damaged.” It adds that 274 kindergartens were also damaged. 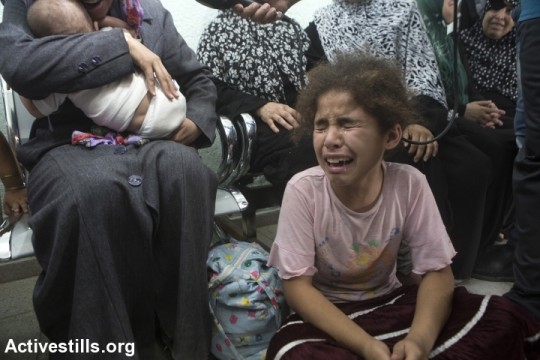 A Palestinian girl cries after an Israeli attack on a Beit Hanoun elementary school, Kamal Edwan Hospital, Jabalyia, Gaza Strip, July 24. The school was being used as a shelter by 800 people. The attack reportedly killed at least 17 and injured more than 200 of the displaced civilians.  (photo: Anne Paq/Activestills)

Sixteen children were killed as a result of Israeli military strikes on UNRWA schools being used as shelters, the report continues. These attacks alone – which came despite the U.N.’s provision of the schools’ exact coordinates to the Israeli authorities at least twice a day, including confirmation that the buildings were in use as emergency shelters — would be enough for Israel to be included in the U.N.’s list, according to DCIP international advocacy officer Brad Parker. Such attacks, if carried out deliberately or recklessly, could constitute war crimes.

One of these incidents — the strike on an UNRWA school in Beit Hanoun, which was being used as an emergency shelter at the time of the attack, and which killed 15 civilians, triggered the launch of a criminal investigation by Israel’s Military Advocate General (MAG), which is ongoing.

However, the MAG’s categorization of the attack as an “exceptional incident” preemptively discounts the possibility that unlawful strikes by Israeli forces during the Gaza war reflected official policy, rather than simply being isolated actions undertaken by individuals contravening the rules of engagement and laws of war. This concern is raised by Ban in the report.

Outside Gaza, the report covers the vast number of injuries to children caused by Israeli security forces in the West Bank. Of the 1,218 injured during 2014, more than half were reportedly under the age of 12. Live ammunition killed 11 children (out of a total of 231 who were shot with live bullets), including the two teens shot dead during a Nakba Day protest in Beitunia, with an additional death caused by a sponge-tipped bullet (a projectile that has also severely injured numerous children since last summer).

The report also cites the ongoing arrest and incarceration of Palestinian children in Israeli military jails, who are tried in military courts. A monthly average of 188 children were reportedly held in military prisons during 2014, amid ongoing issues surrounding their mistreatment at the hands of Israeli security forces, including unprovoked physical attacks. The report also refers a pilot program launched in February 2015 to minimize nighttime arrests of children, but fails to mention that the pilot has since been suspended (and that in any case, the program only led to a 5-percent reduction in nighttime arrests, according to Military Court Watch). 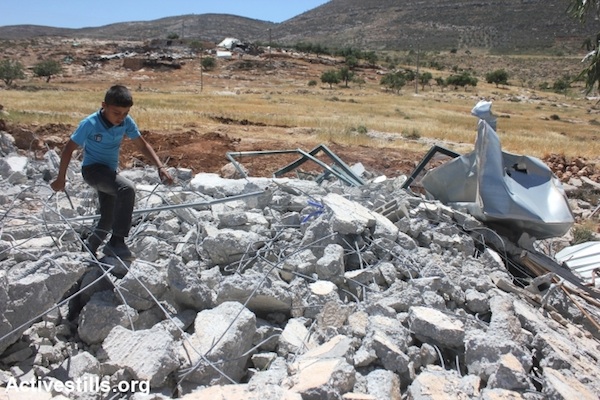 A Palestinian child climbs over the rubble of a demolished mosque in Khirbet Twaiel, West Bank, April 30, 2014. (Photo: Ahmad al-Bazz/Activestills.org)

Ban’s conclusions on Israel’s violations against Palestinian children contain two highly significant statistics: firstly, that the number of Palestinian children killed in 2014 was the third-highest of all situations the UN monitored, after Afghanistan and Iraq, and before Syria and Darfur. Secondly, “the number of schools damaged or destroyed in the State of Palestine (at least 543) was the highest recorded number of all situations in 2014.”

These numbers call into question Ban’s decision to leave Israel out of the annexes to the report, for in effect, his conclusion places it on equal footing with countries and non-state groups that were listed. Ban’s concluding statements in the report call on Israel to investigate itself over its violations of children’s rights, a process that rights groups say has consistently failed to bring justice to victims of Israeli military operations.

Palestinian Ambassador to the U.N. Dr Riyad Mansour on Tuesday criticized the U.N. for continuing to grant Israel immunity at the international legal level, while citing “inordinate” diplomatic pressure as the primary reason behind Ban’s decision. Washington is allegedly taking extra precautions to protect Israel in the United Nations ahead of a U.S. Congress vote dealing with the Iran nuclear deal.

Israel is a signatory to the United Nations Convention on the Rights of the Child, which it ratified in 1991.

BECOME A MEMBER
More About children 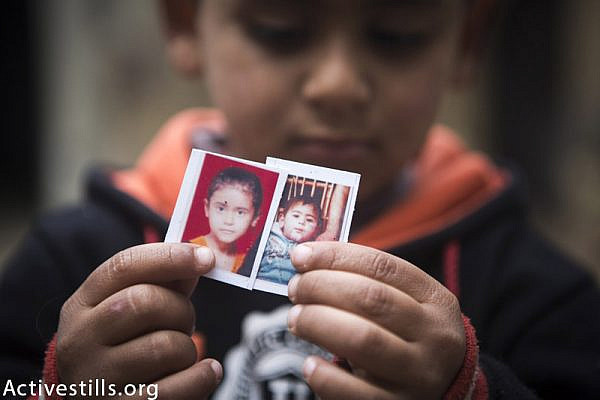 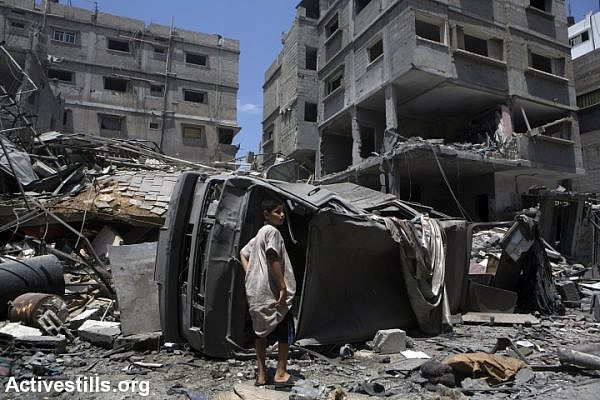 Permanent victims of war: Who remembers Gaza’s children?
The Israeli public’s indifference to the effects of war on Palestinian children does not result in passivity — it is an integral component of the violence Gaza’s population faces. Ali al-Awour (pictured above on the left) was a 10-year-old boy from Gaza who loved to play soccer. On June 11, 2014, Ali was riding on…
By Amjad Iraqi July 21, 2015 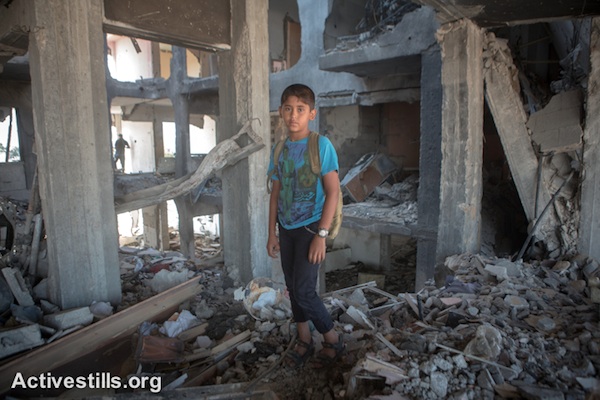 PHOTOS: Gaza’s children face an uncertain future
Israel’s latest offensive on the Gaza Strip killed more than 500 children. Those who survive must endure ongoing trauma and displacement. Photos by Anne Paq and Basel Yazouri/Activestills.org Text by Anne Paq I visited Al Nada towers in Beit Hanoun in the northern Gaza Strip after they were destroyed by Israeli strikes. The towers had…
By Activestills September 30, 2014