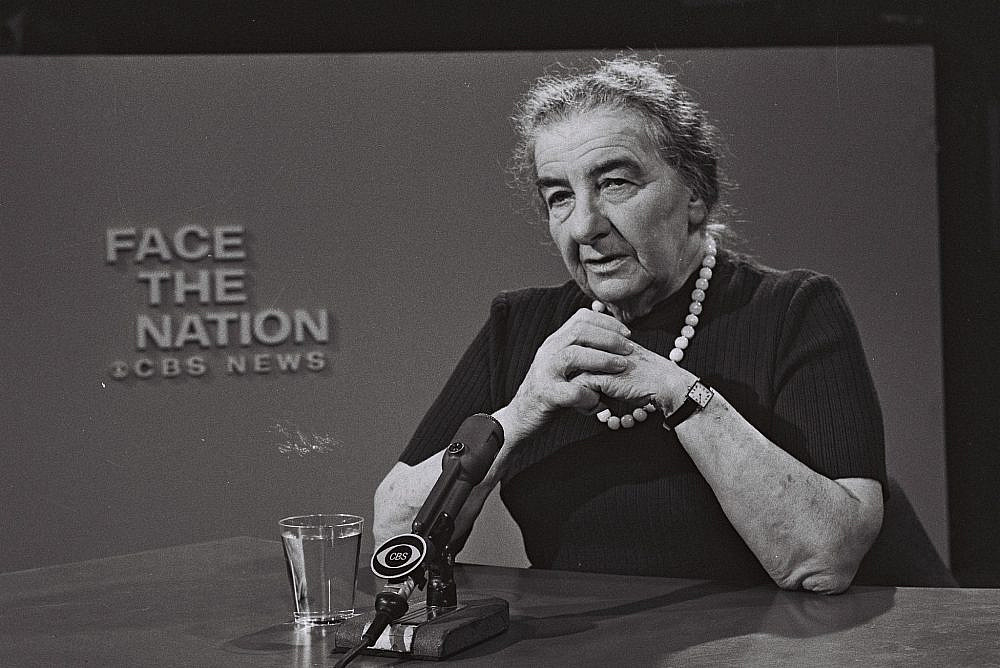 The decision of Congresswoman Alexandria Ocasio-Cortez to withdraw from a memorial honoring Israeli Prime Minister Yitzhak Rabin has rightly been seen by observers as evidence that Palestinian voices and perspectives are finally being taken seriously in progressive Democratic circles. But while some of AOC’s critics in the United States are using the incident to score political points, others seem genuinely confused by her decision.

A key reason for this bafflement is that many Americans’ memories of Rabin have long been colored by a relentless media narrative that deprived them of critical perspectives on his life and legacy. In fact, looking back at the Oslo years, the voices of Palestinians — the victims of Rabin’s decades-long career — rarely made it into the pages of influential U.S. publications. Had they been featured, many Americans may have had a more informed opinion about why Palestinians would oppose honoring Rabin.

As a Palestinian-American historian, professor, and opinion writer, I know from my work and my personal experience that Palestinian viewpoints rarely appear in mainstream U.S. media outlets; I especially remember my frustration at the lack of Palestinian voices in U.S. publications during the Oslo years. But to what extent is this the case? How many opinion pieces in major media outlets have actively discussed Palestinians? How many of those pieces have been written by Palestinians? How has this trend changed over time?

I decided to crunch some numbers to find out more.

In searching for answers, I focused on opinion pieces for two reasons. First, scholarly analysis of major U.S. outlets has already demonstrated that their news coverage is heavily shaped by pro-Israel biases. Second, opinion pieces are playing a stronger role than ever in shaping our understanding of the news. As one newspaper editor explained, “In a 24/7 news environment, many readers already know what happened; opinion pieces help them decide how to think about it.” 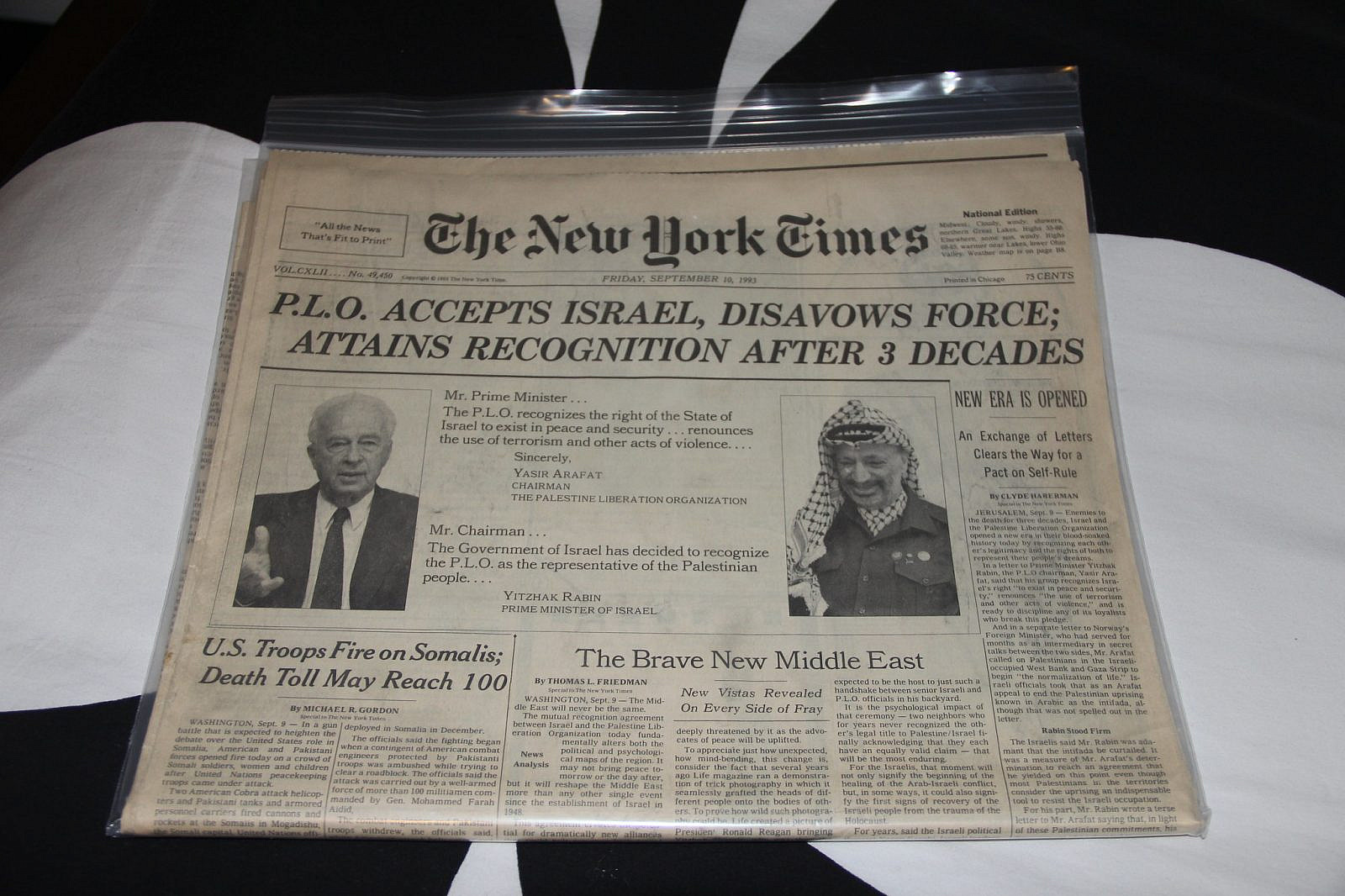 So, how are American news readers encouraged to think about Palestinians? Using several news databases (Proquest, Gale, and Nexis Uni), I searched for the keyword “Palestinian,” limiting my results to editorials (written by the editorial board), columns (written by staff columnists), and guest opinion pieces. I included all three because they all have the same function: to influence how readers make sense of the headlines.

As samples, I examined two daily newspapers — The New York Times and The Washington Post — and two weekly news magazines — The New Republic and The Nation — over a 50-year period, from 1970 to 2019. Given that commentary and analysis are infused throughout weekly news magazines (including as reported features), I included all articles in them that mentioned Palestinians in my tally.

I chose the New York Times and Washington Post because of their wide reach, with roughly 6 million and 1.5 million subscribers, respectively. I included New Republic given its outsized role in shaping the views of the cultural and political elite, especially from the 1980s through the early 2000s. And I included The Nation as the most high-profile progressive magazine in the United States, with a reputation for being supportive of the Palestinian cause.

I had expected to find relatively few opinion pieces by Palestinians, and I was correct. But what surprised me was how much Palestinians have been talked about in major U.S. media outlets over the decades. Editorial boards and columnists seem to have been quite consumed with talking about the Palestinians, often in condescending and even racist ways — yet they somehow did not feel the need to hear much from Palestinians themselves.

This trend was especially striking in the daily press. In the New York Times, less than 2 percent of the nearly 2,500 opinion pieces that discussed Palestinians since 1970 were actually written by Palestinians. In the Washington Post, the average was just 1 percent. 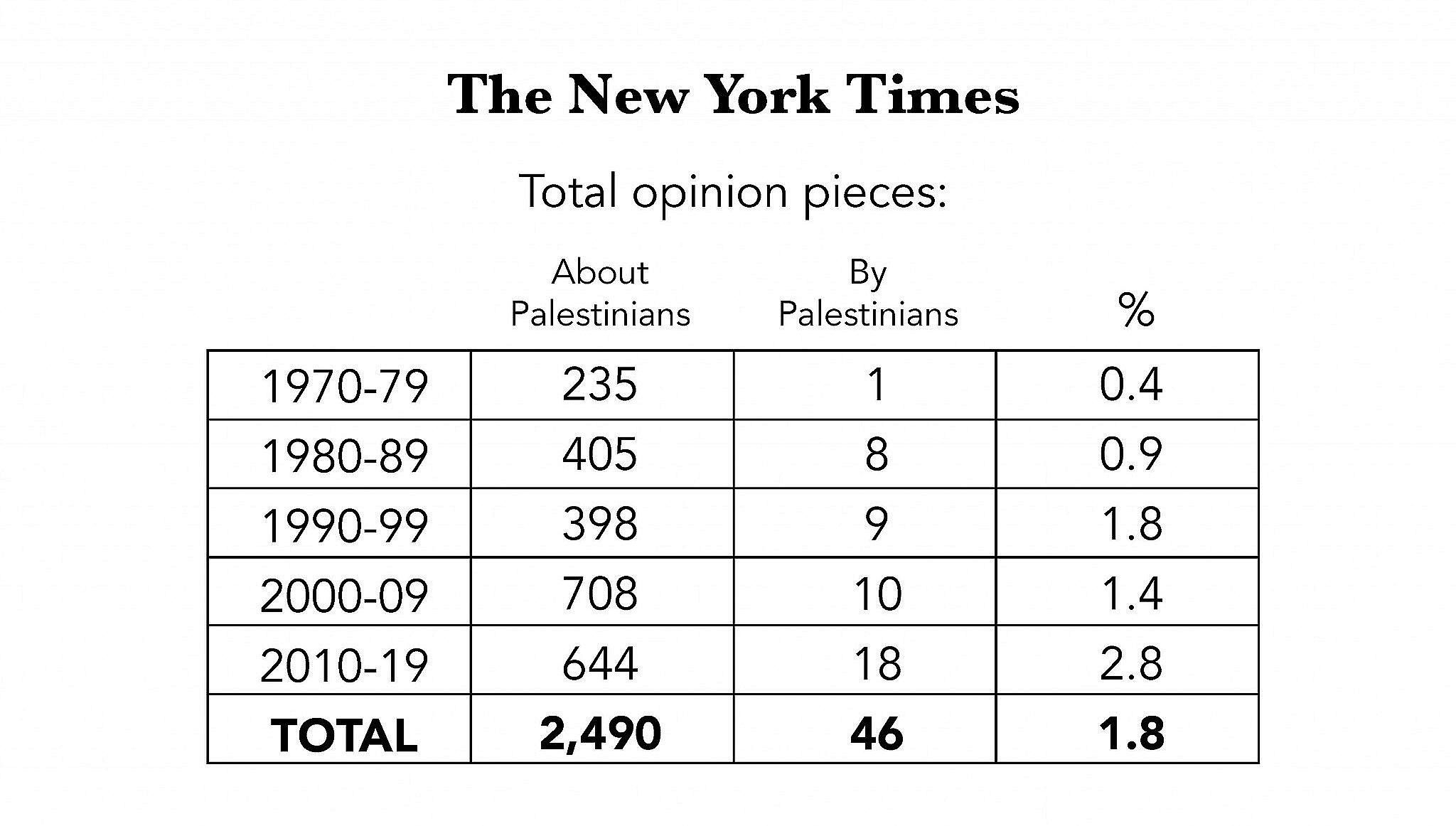 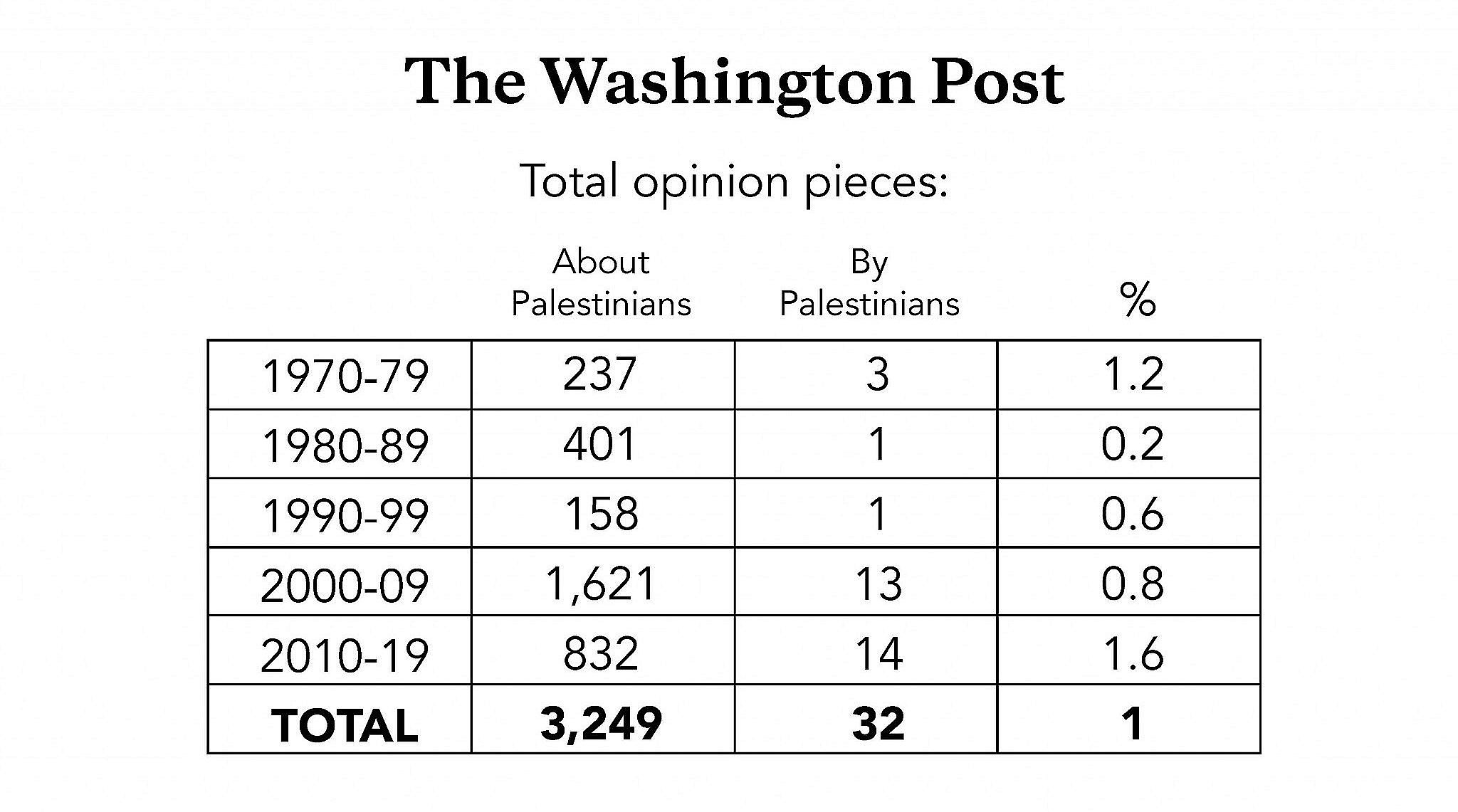 The numbers for the weekly magazines are striking as well. During its heyday, The New Republic had enormous influence on the political and cultural elite in the United States. In total, nearly 500 pieces discussing Palestinians appeared in these pages over 50 years, with more than two-thirds of them published since 1990 — during the First Intifada and the prelude to the Oslo peace process. Yet out of these 500 pieces, the editors did not think it necessary to get the viewpoint of even a single Palestinian. 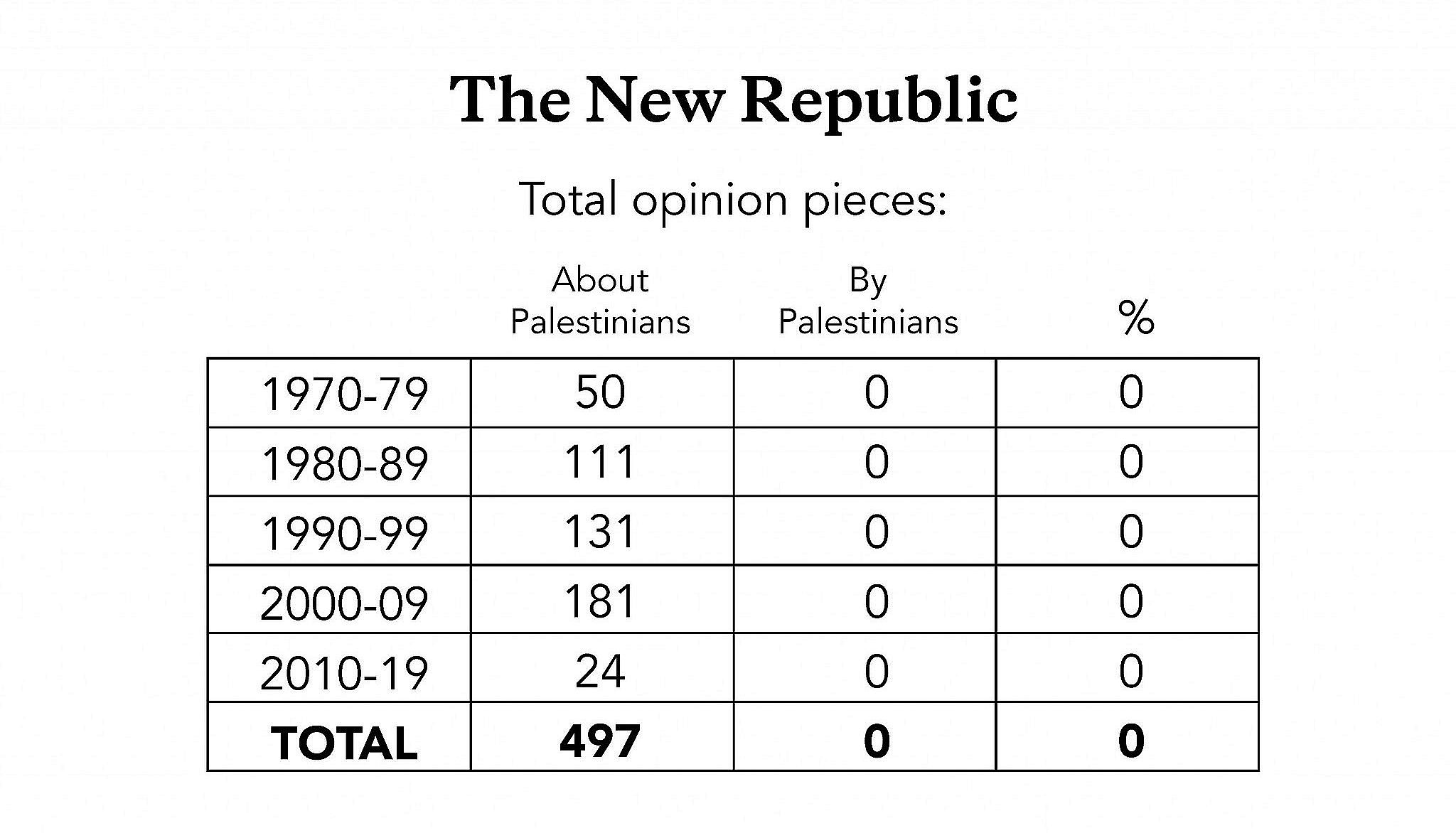 Even The Nation, with its vaunted reputation as a progressive and pro-Palestine magazine, had only marginally better numbers, with a total average of roughly 10 percent. 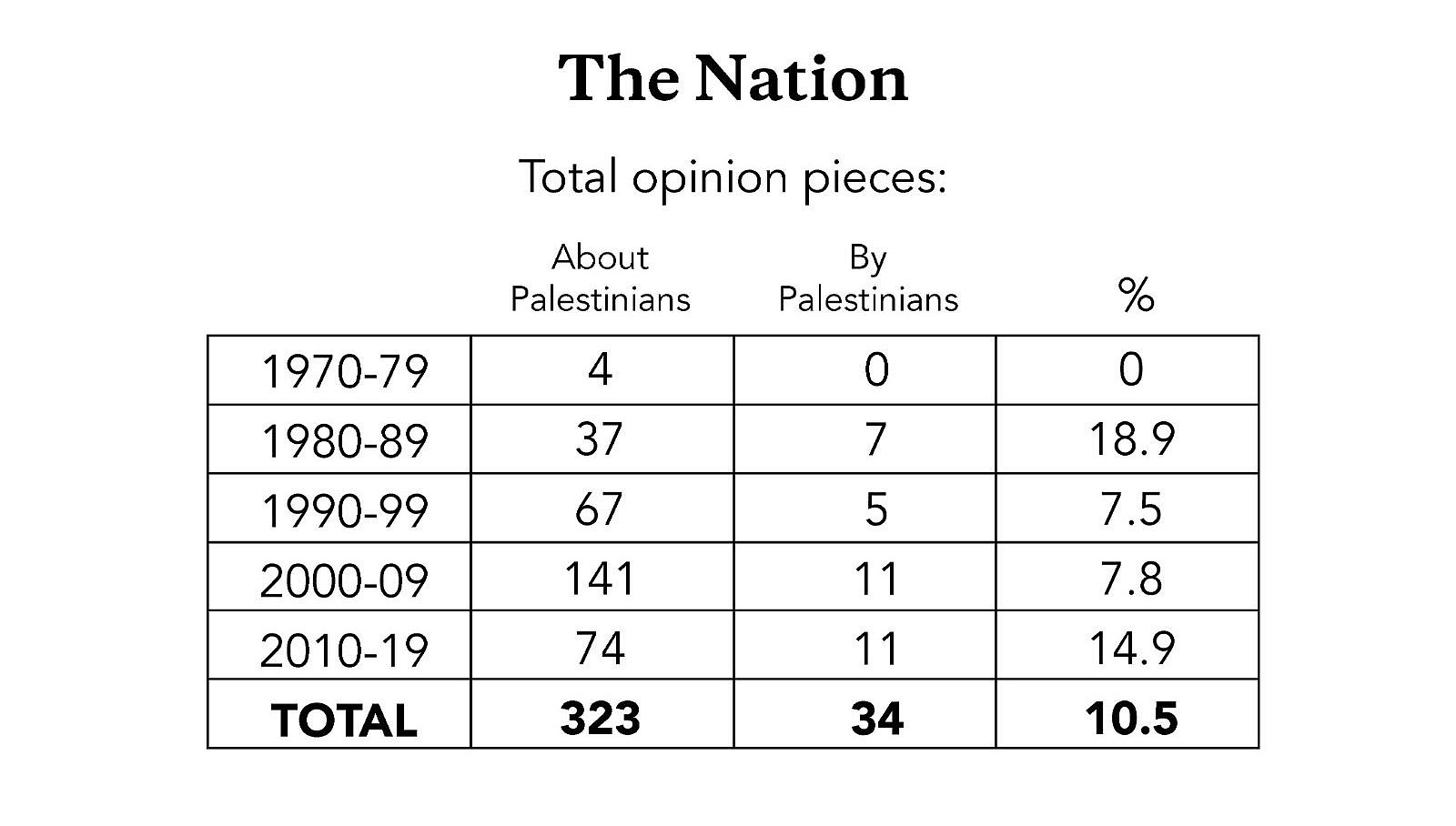 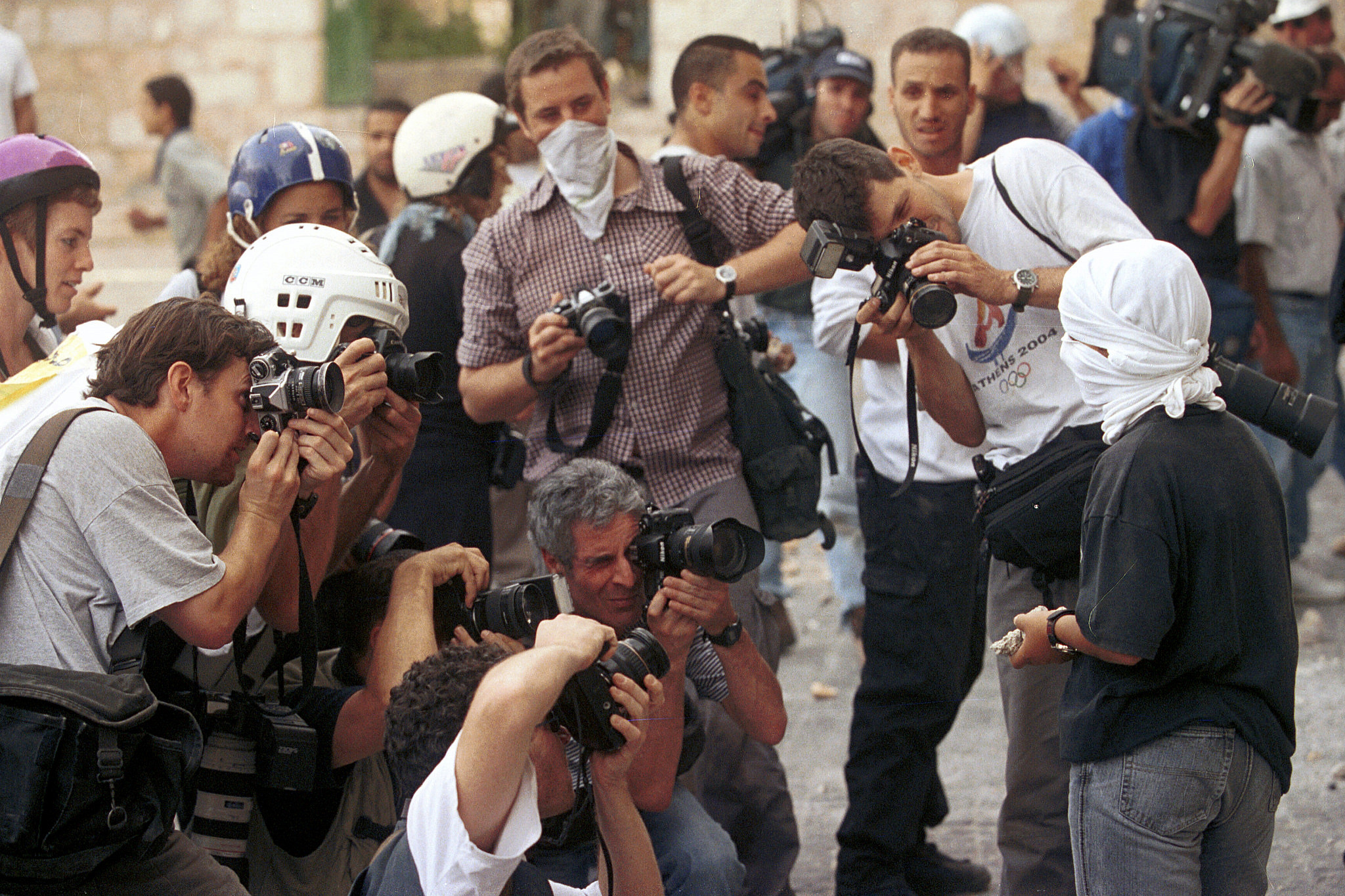 The lessons of Edward Said

What accounts for these startling statistics? One key factor is the lack of Palestinian journalists and columnists working in U.S. mainstream media, in part because the Palestinian (and Arab) American communities are so small. But this line of argument obscures the fact that there have been many Palestinians willing and able to express their viewpoints as guest columnists, yet they have been routinely excluded from major news outlets.

Take for example Edward Said, the renowned Palestinian-American intellectual and professor at Columbia University who was an outspoken advocate of the Palestinian cause. While three of Said’s op-eds discussing Palestinians ran in the New York Times in the 1980s, from the 1993 signing of the Oslo Accords until his death in 2003, the newspaper ran only a single letter to the editor authored by him in January 1997, in which Said criticized the Oslo framework.

During that time, Said’s opinion pieces explaining Oslo’s fatal flaws appeared in The Guardian, al-Ahram Weekly, and even the Pittsburgh Post-Gazette. Yet readers of America’s “newspaper of record” were not able to hear from one of the country’s most eloquent and prescient Palestinian critics of the “peace process” narrative. While we cannot know if or how often Said reached out to the New York Times on his own accord, it is surprising that the newspaper did not solicit his voice as a prominent Palestinian figure and previous contributor.

Instead, readers’ views were shaped by columnists whose copious opinion pieces about Palestinians ranged from the annoyingly condescending to the outright racist. During the 1990s, Thomas Friedman wrote 33 columns discussing Palestinians; William Safire wrote 24, Anthony Lewis wrote 39, and A.M. Rosenthal penned 56. While they differed on various aspects of Oslo, none of them questioned the framing that “peace” was the ultimate goal, that Rabin was “a man of peace,” and that Palestinians who opposed Oslo were in fact opponents of peace. 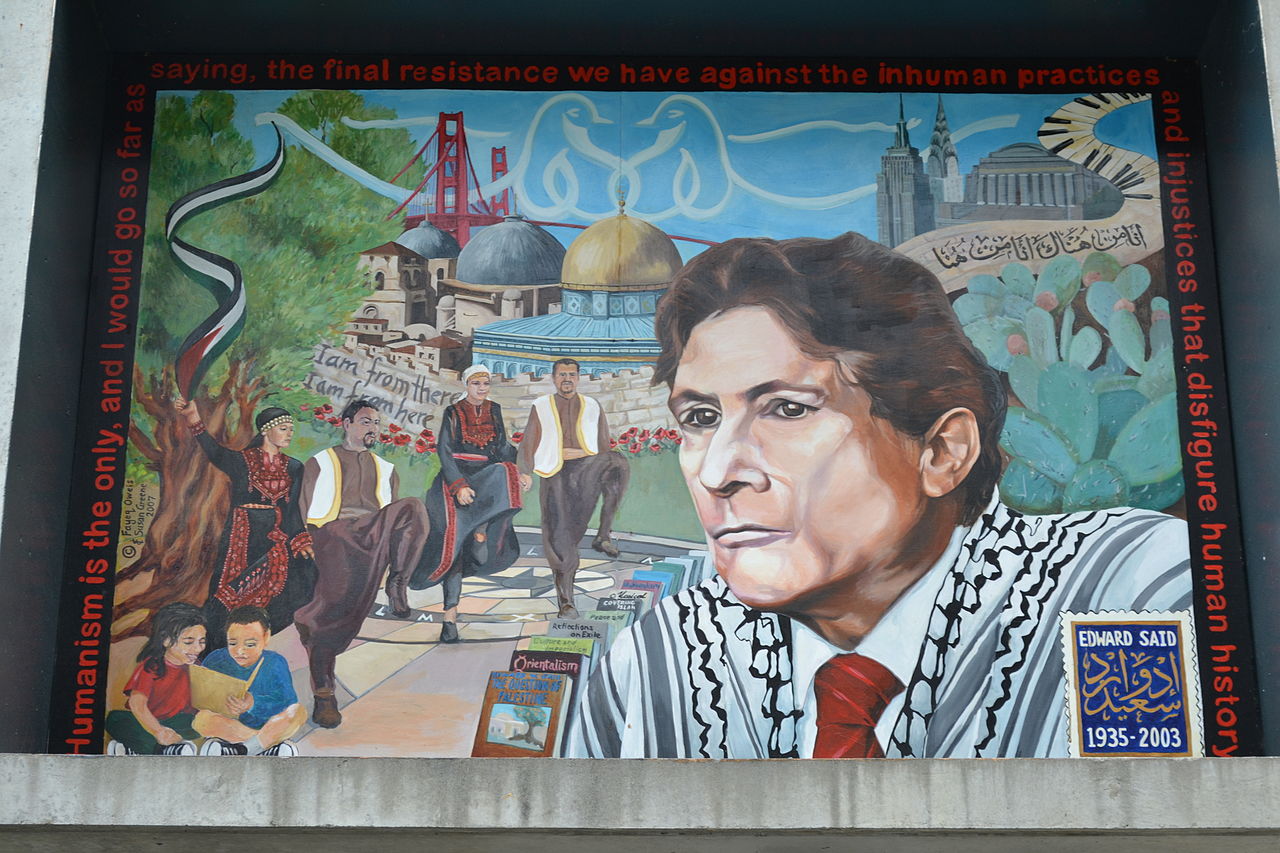 It is unsurprising, then, that most readers of the mainstream U.S. press would not understand that Rabin only recognized the PLO as “the representative of the Palestinian people,” but did not recognize Palestinians’ right to establish a state along the 1967 lines. They would not know that illegal Israeli settlements continued to expand under Rabin’s watch.

They would not know that, a month before his assassination, Rabin reassured fellow Knesset members that the state Palestinians desired would be “an entity which is less than a state.” And they would not know that, in those same remarks, Rabin made clear that Israel’s borders would be “beyond the lines which existed before the Six Day War,” along with a “united Jerusalem, which will include both Ma’ale Adumim and Givat Ze’ev [West Bank settlements], as the capital of Israel, under Israeli sovereignty.” This is the Rabin that Palestinians know all too well.

The erasure of these facts — and the longer history of Palestinian dispossession — in American media was not an oversight; it was baked into the narrative of the “peace process” itself. Said himself pointed out this phenomenon: in a cover story for the New York Times Magazine (a separate supplement to the newspaper) in 1999, Said wrote that the Oslo process “required us to forget and renounce our history of loss, dispossessed by the very people who taught everyone the importance of not forgetting the past.” As this week’s debate on Rabin shows, that forgetfulness is still being demanded of Palestinians to this day.

Some people may dismiss the attention to major American news publications as folly. They may argue that legacy media is becoming less relevant by the day, and that we should not wring our hands worrying about putting Palestinian perspectives in these dying outlets (The New Republic, which was the subject of several post-mortems in 2014, is a prime example of this decline). 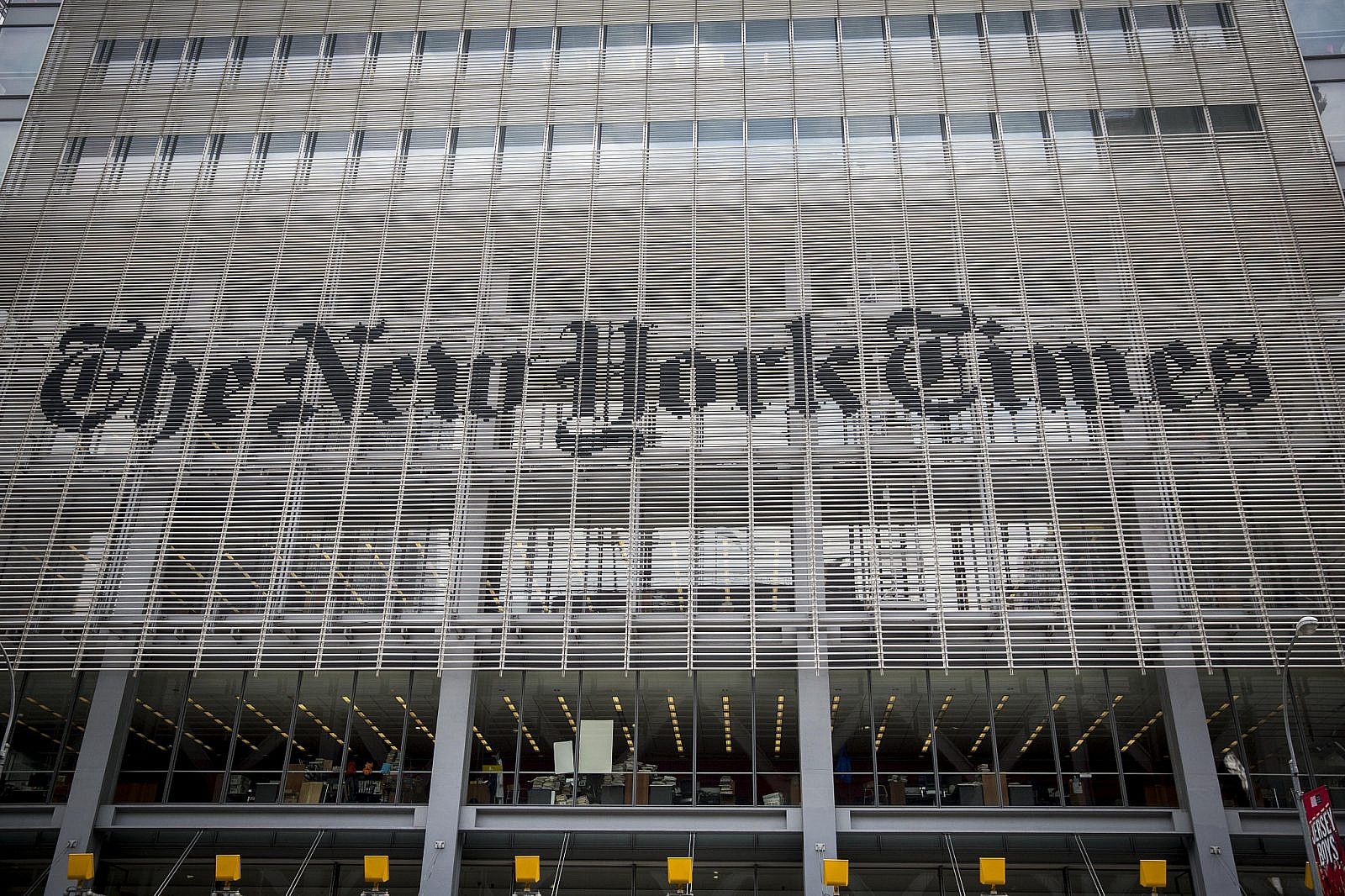 I am sympathetic to this view. But the latest controversy around Rep. Ocasio-Cortez shows that the impact of these media outlets continues to reverberate today. These outlets still hold sway in shaping how many Americans view Palestinians — and Palestinians are still being excluded from that discussion. In 2020 so far, the New York Times has run 39 opinion pieces in its print and online platforms that discuss Palestinians; only three were actually penned by Palestinians.

Moreover, the silencing of Palestinians is part of a larger problem of systemic bias and lack of diversity in journalism, particularly at elite news outlets. It is not just Palestinians: Black, Indigenous, Latin American, Asian American, and other people of color face ongoing racism in the newsroom, making it more difficult for alternative perspectives to make their way into these influential pages.

Given that these are structural impediments, the solutions will have to be structural in turn. Inviting more Palestinians and other people of color to contribute to these platforms is only a first step. News outlets also need to pay closer attention to their hiring, mentoring, and promotion practices — something that the New York Times guild recently proposed to its leadership.

The rest of us, however, are not waiting for the legacy outlets to catch up with the times. Alternative news outlets (including +972 Magazine), along with many Palestinians on Twitter and other social media sites, are providing fresh perspectives that we can follow, engage with, and share. The avalanche of tweets and comments highlighting Rabin’s violent legacy is just one example of this. And as more Americans receive their news from social media (including politicians), those wanting Palestinian perspectives now have a much easier time getting them.

Ultimately, we need to challenge the structural exclusions that have silenced us for decades. We also need to encourage the current progressive changes in the media landscape by supporting alternative media platforms with our time, clicks, and donations. This dual approach is the only way to ensure that Palestinian voices are heard. The good news is that more people, including our political representatives, are paying attention to what we have to say.

Dr. Maha Nassar is an Associate Professor in the School of Middle Eastern and North African Studies at the University of Arizona. She is the author of "Brothers Apart: Palestinian Citizens of Israel and the Arab World" (Stanford University Press, 2017). Twitter: @mtnassar.