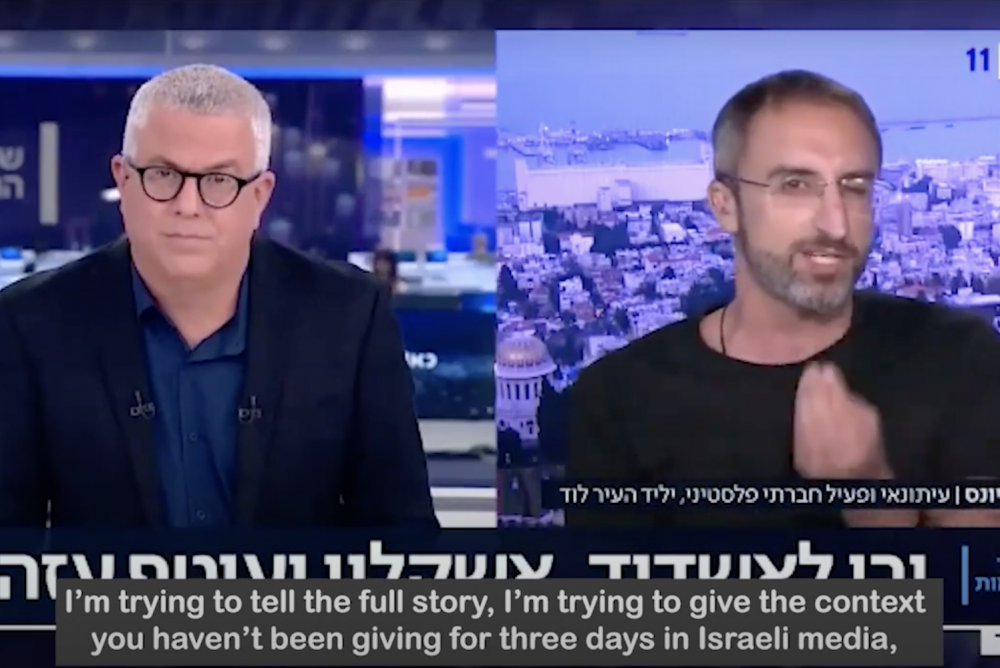 One interview says it all.

On Wednesday I was invited to speak with the Israeli Public Broadcasting Corporation, otherwise known as KAN, on the situation in my hometown of Lyd (Lod in Hebrew). For the past two days, the city has been placed under a state of emergency. I knew I was walking into the lion’s den, but I had a plan.

I agreed to the interview with journalist Dov Gil-Har on one condition: that KAN doesn’t show footage of Palestinians “rioting,” but instead give me 10 minutes to explain how Israeli settlers in Lyd are actually the ones attacking us with active help from the police.

Prior to the interview, I sent over videos of police throwing stun grenades at houses with Palestinian children inside, and allowing Israeli settlers to attack Arabs in the city while officers look on. In short, I wasn’t going to let them take advantage of my time.

The Israeli media has a habit of inviting Arabs to speak only to manipulate the interview in order to “confront” the interviewee and force her or him to condemn whatever actions their fellow Palestinians take. In their perspective, this makes the interviewers fair or even liberal, but the purpose is often to humiliate the token Arab and whip them until they are docile.

No story begins in the middle. When you are not allowed to provide the broader context and tell the whole story, you know you have to fight even harder to get the word out.

To understand what’s happening in Lyd, you need to go 15 years back. Jewish settlers started moving into the city with an open and declared goal to “Judaize” it. The average of Arab home demolitions has increased dramatically ever since, with settlers actively pushing Palestinians out.

Palestinians in the city began demonstrating in support of Al-Aqsa and Sheikh Jarrah in Jerusalem, but were immediately met with police violence. The only difference is, Lyd’s Palestinians had even more pent up anger toward the police, city, and the settlers. Rage that has been building up for 15 years. Add to that mix a mayor who just last week invited Kahanists to talk about countering “organized Arab violence in the city.” But anyone who cared to dig a little deeper into what prompted the visit by the far-right extremists would find that it was Arab kids playing with fireworks during Ramadan.

The city’s people couldn’t take it anymore, and last week things spiraled out of control into attacks on local synagogues and Jewish Israeli residents.

One Palestinian has already been shot dead in Lyd. Hundreds of others have been wounded. The city is under curfew but there are brigades of settlers who have come from the West Bank who are attacking Arabs and their property while being escorted by police. In some instances they are even leading the attack.

This is unprecedented, but it isn’t the beginning of a civil war, as the Israeli government would like you to believe. In Lyd,  it’s one side that is locked up at home and has to deal with both the police and the settlers who are looking for an opportunity to kill.