Hundreds mark International Women’s Day with a joint Israeli-Palestinian protest outside the ‘tunnels checkpoint’ in the West Bank. ‘Our children pay the price of the conflict, and we want to protect them.’

Over 500 Israelis and Palestinians took part in march to mark International Women’s Day and to call for an end to the occupation and violence last Friday. 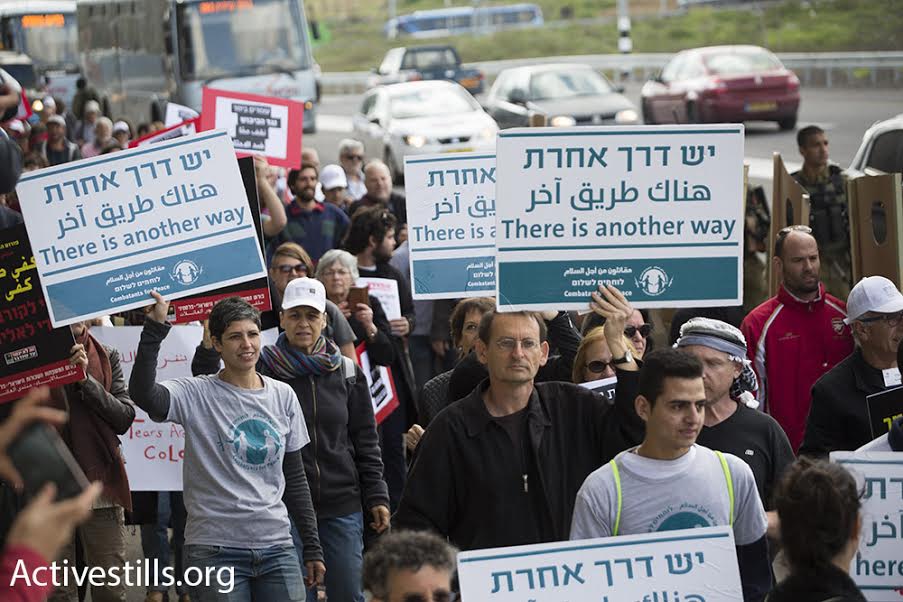 The march began at the Husan junction on Route 60 — the southern West Bank’s main north-south artery that connects Jerusalem, Beit Jala, the Gush Etzion settlements, and Hebron — and ended the “tunnels checkpoint,” where a small demonstration was held. 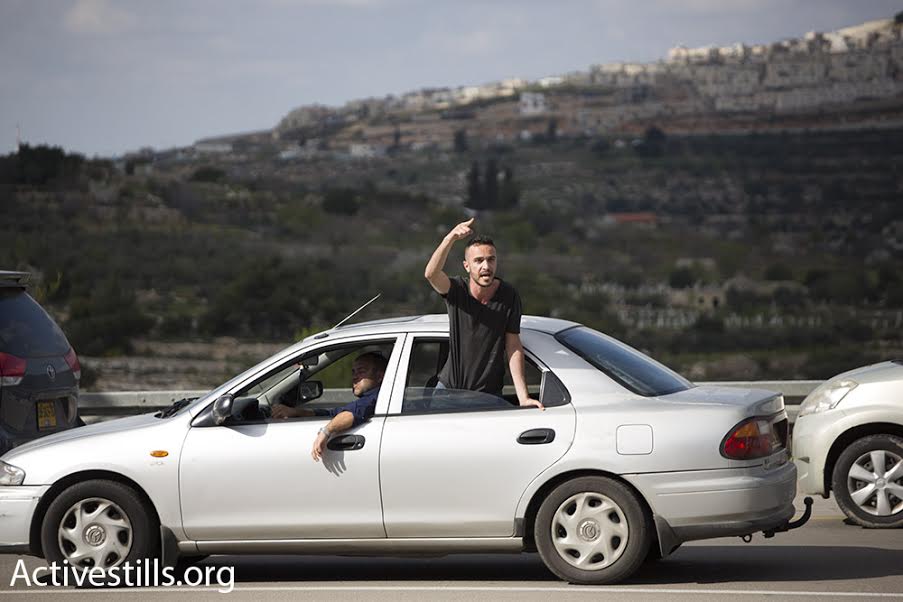 An Israeli yells at Israeli and Palestinian demonstrators during a protest march in the West Bank, March 4, 2016. (photo: Oren Ziv/Activestills.org)

The demonstrators chanted slogans against gender violence in Israel and Palestine, as well as against home demolitions and for a two-state solutions. At one point they released hundreds of balloons over the separation wall.

This was the fourth — and largest — joint demonstration at the tunnel’s checkpoint in the last few months, organized by “Standing Together,” which includes anti-occupation groups such as “Combatants for Peace” and others. As opposed to previous demonstrations, Israeli police and soldiers accompanied the marchers and no arrests were made. 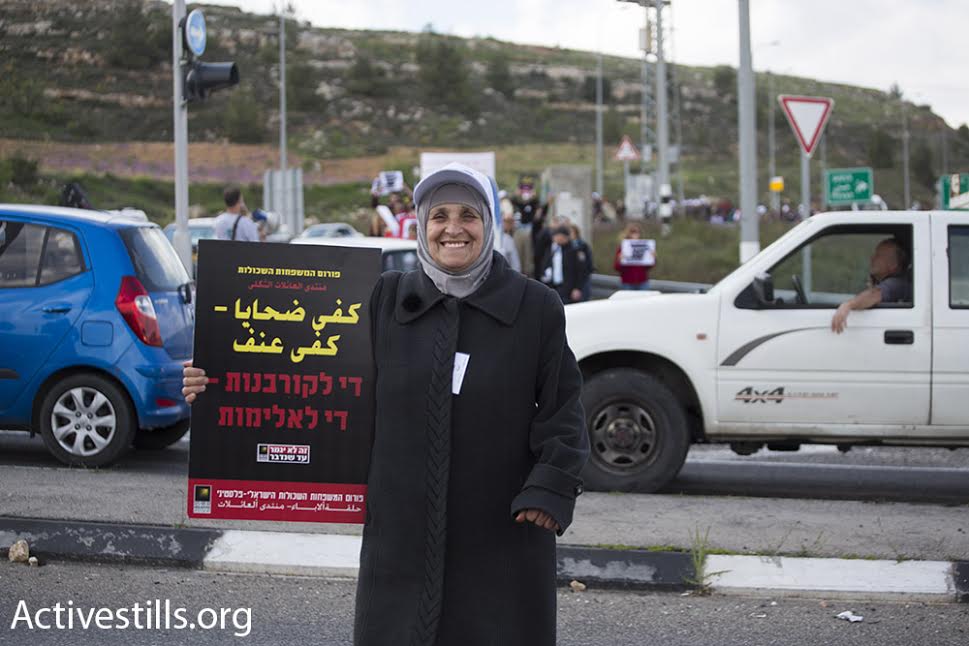 “We keep growing from time to time, and soon we will need to use a new PA system so that everyone can hear us,” joked Yael Admi, Chairperson of the the Parents Circle Families Forum.

A week after Israel’s defense minister and police commissioner described Palestinian bereavement as fundamentally different from — and inferior to — Israeli bereavement, members of the Parents Circle Families Forum asked to emphasize the similarities between the two, and the desire to prevent more deaths. 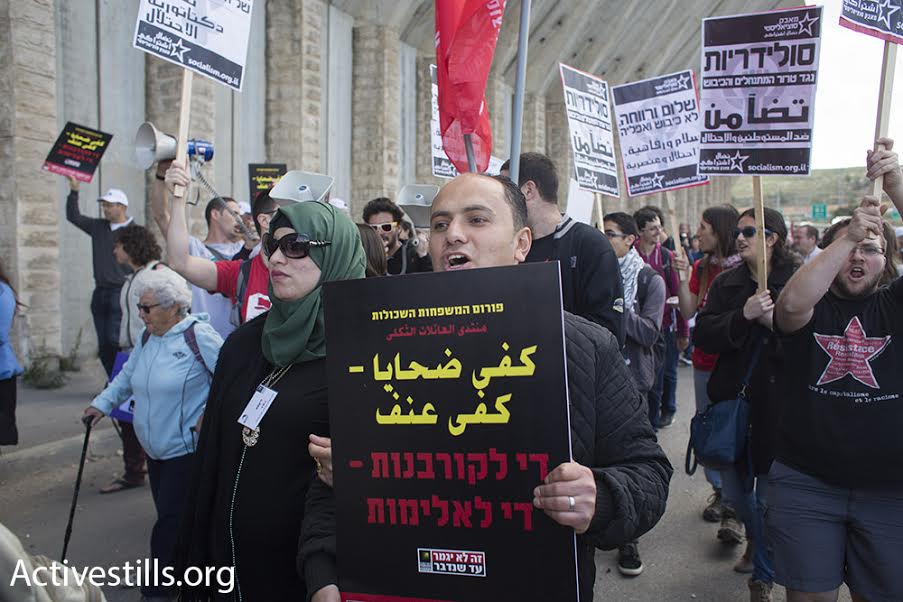 Among the speakers at the demonstration were Basma al-Afendi from Dheisha refugee camp, a nurse and member of the Palestinian General Federation of Trade Unions, who drew a connection between workers’ struggles, women’s struggles and an end to the occupation. “Women are made to stand at checkpoints for three hours every day on their way to work in Jerusalem — this is a heavy price to pay for one’s income,” she said. “But now I see you here, and I remember the good days of the ‘peace camp,’ and I hope that through similar protests we will see change.” 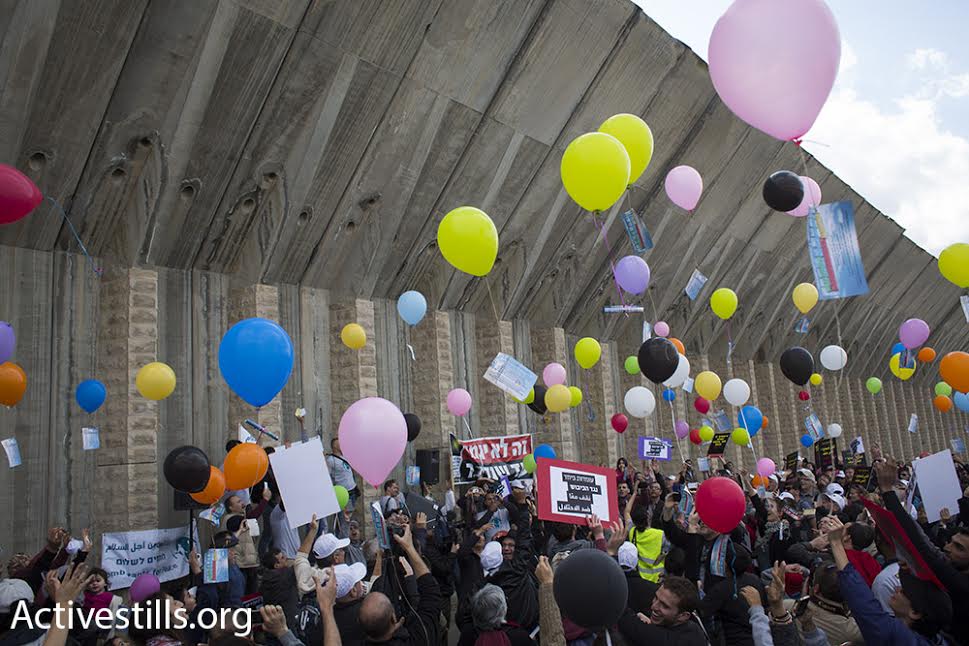 “Women in Palestine are the leaders of the struggle for equality and independence,” added Huda Abuarquob, Regional Director of the Alliance for Middle East Peace (ALLMEP). “Our children pay the price of the conflict, and we want to protect them. Our message is that justice is necessary for Palestine, and security is necessary for Israel. We can’t have one without the other.”

emailemailemail
Before you go…
A lot of work goes into creating articles like the one you just read. +972 Magazine is nonprofit journalism, owned by many of our writers, editors, and journalists. In order to safeguard that independent voice, we are proud to count you, our readers, as our most important supporters. With your support, we can keep +972 Magazine a strong, independent, and sustainable force helping push the global discourse on Israel/Palestine.
DONATE
More About Route 60 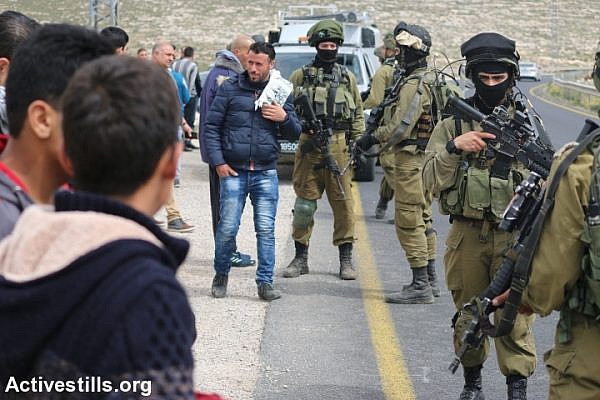 PHOTOS: Palestinian village protests 17 years of military closure
The main entrance to the West Bank village of Qalqas has been closed since the Second Intifada. The residents are having none of it. Photos and text: Ahmad Al-Bazz/Activestills.org Some 250 Palestinian residents of the West Bank village of Qalqas, south of Hebron, protested on Friday against the Israeli military’s closure of their village’s main entrance,…
By Activestills March 19, 2017 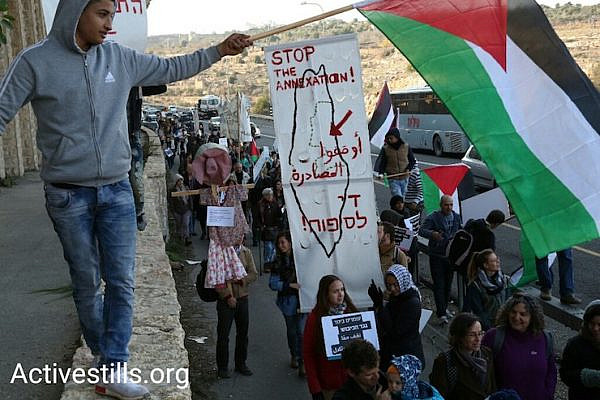 PHOTOS: Jews, Arabs march on settler highway to protest the occupation
Hundreds of Palestinians and Israelis participate in a joint demonstration to protest the occupation, marching along a settler highway to an Israeli checkpoint. Photos and text: Keren Manor / Activestills Around 400 Palestinians and Israelis marched on an Israeli checkpoint in the West Bank on Friday, protesting the occupation and marking a year of joint monthly demonstrations.…
By Activestills December 16, 2016 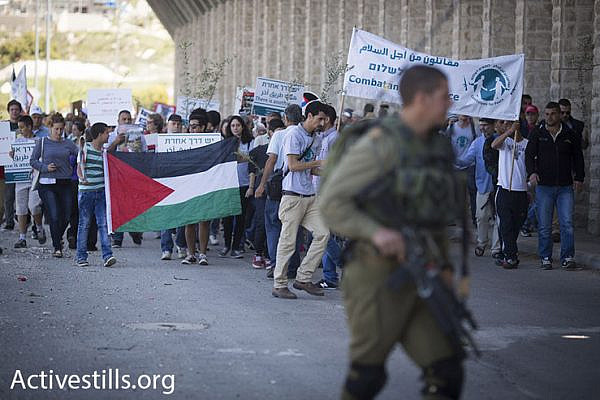