With all eyes on Gaza, Israeli police forces shoot tear gas into an elementary school. Twenty-nine children were hospitalized and 19 people were arrested after police attempted to place eviction notices on several buildings in the Bir Hadaj village in the Negev. 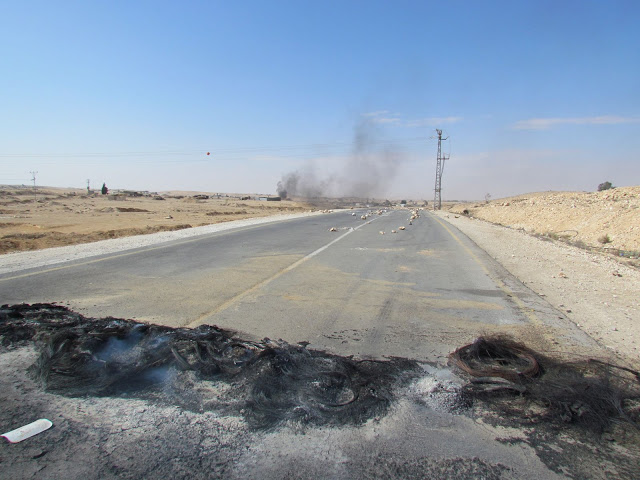 Smoke rises from an elementary school in the Bedouin village of Bir Hadaj after police forces shot tear gas at students (photo: Adalah)

Sometimes all a schoolteacher can do is hold up his cellphone and film children fleeing the playground, or being carried off by other teachers. Sleman Abu Laqia, of the village Bir Hadaj in southern Israel, found himself in this situation Monday morning. The schoolyard was supposed to serve as a safe zone for the children, while police stormed the village, giving out house demolition notices. It proved inadequate.

As things quieted down, Sleman collected the empty canisters, assembled them on a table beneath the sign reading “Bir Hadaj Elementary School” in Hebrew and Arabic, and took one more shot. It is this picture that appeared in my Facebook feed this morning, with a caption explaining that over twenty children were rushed to the hospital. I looked the story up in the Hebrew news sites. Haaretz – nothing. Ynet – nothing, NRG –zilch.

This only left one option: to travel down south and see for myself. Having boarded the train, I contacted Nadia Ben-Youssef of Adalah, The Legal Center for Arab Minority Rights in Israel, and was literally relieved to discover that she knew what I was talking about. A story this intense, which goes completely ignored by the media, can make one fear delusion.

Shells of tear gas and stun grenades that were gathered after being used against Bedouin school children in the Negev (photo: Sleman Abu Laqia)

Nadia gave me some background. Unlike most Bedouin communities around Be’er Sheva, Bir Hadaj is recognized by the state. It is nearly impossible, however, for residents to receive building permits, and natural growth of many families forces the residents to build illegally. Representatives of the Israel Land Authority came to the village on October 10 with eviction notices, preceding house demolition, and were chased away by a local mob. They returned the following day, reinforced by police, and posted the notices. On October 18, the villagers declared a strike and demonstrated peacefully. Ten individuals were detained the day before, and later released without charge.

I arrived at the grand atrium of Be’er Sheva’s District Court, and met Salman Abu-Hammed, the head of the village’s council, with a few of its elders. Abu-Hammed told me that early in the morning, a large number of policemen surrounded the village, supported by two crowd dispersal trucks, a helicopter and between 20 and 30 vehicles. He claimed that eviction notices were posted at random, on houses built several decades ago, and said he suspects the entire event to be a provocation. “They came prepared to beat people up, to punish people for the previous confrontations. They also brought mista’arvim [policemen disguised as Bedouin] to cause provocation and stir the situation out of control.”

The forces moved into the town down its only paved road, the one that leads to the school, with the villagers attempting to block their stride along the way. “I hear the police saying that they stood 300 meters from the school,” says Sleman the teacher. “That is ridiculous. It is much more dangerous to shoot into a school yard from a distance, when you can’t see who’s there.” Fortunately, no child was hurt directly, but several were moved to Be’er Sheva’s Soroka Hospital following the incident in a state of shock, as were three adults allegedly hurt by rubber bullets. The villagers told me that among the wounded was a pregnant woman.

Nineteen of the village’s residents were taken into custody, and the village’s elders were waiting in the court for them to be brought before a judge. When a judge did arrive, I made a mistake, taking a photo with my iPhone, and was instantly taken outside. This was of course my bad. I am not used to courtrooms and forgot about the restriction. Standing outside, I understood the absurdity of the situation: where were the journalists who typically cover such cases and are versed with the legal issues? Why was it left for an ignorant travel blogger like myself to cover this story alone? Where was the mainstream media?

I phoned a major media personality and asked him whether he had heard of the events. He did, and promised me he would look further into it. Later on, he texted me the following message: “29 children arrived at the (Soroka) hospital with concerns related to gas inhalation, they were examined and released. No pregnant woman was hurt or sent to the hospital. Masked youth attacked officials who brought eviction notices, burned a silo at Kibbutz Revivim and threw stones at moving vehicles. They were arrested.”

This was, of course, an abbreviation of the police spokesperson’s press release. The manner in which it was repeated attests in my eyes both to the laziness of the Israeli media in matters relating to the Arabic speaking public, and to our need to justify an unjust system. I was later told that the media was too busy covering the mounting tension in and around Gaza (which is likely why the operation took place specifically today), and found my train halted on the way back due to missile threats, but the problem seems to run far deeper. The official version calms us, and so we cling to it. It is also correct, in most cases, but leaves out much of the story. Just picture the press release and headline had this school been full of Jewish children – you get a much different picture.

UPDATE: As of 10:30 p.m. on Monday night, 5 members of the village, including one minor, were brought before a Be’er Sheva judge.

One 16-years-old was shot at close-range with a rubber bullet. According to his testimony, he ran into his home following clashes with police. The police broke down the door to the bathroom and shot him with a rubber bullet in the chest, before tasering and brutally arresting him. The judge condemned the police actions and released the boy without conditions. Stay tuned for updates from the court. The judge should be hearing the remaining eight adult arrestees in the coming hour.

WATCH: Teachers carrying children who were hit by stun grenades:

email
Before you go…
A lot of work goes into creating articles like the one you just read. +972 Magazine is nonprofit journalism, owned by many of our writers, editors, and journalists. In order to safeguard that independent voice, we are proud to count you, our readers, as our most important supporters. With your support, we can keep +972 Magazine a strong, independent, and sustainable force helping push the global discourse on Israel/Palestine.
DONATE
More About Negev/Naqab