With chants of “Death to Arabs” and “Mohammed is dead” in the background, the 30-something couple spoke earnestly, their faces worried. “As far as I’m concerned,” said the woman, an economist who didn’t want to be named, “I came to a funeral. The father is in mourning. I’m here to support the family in their pain with our presence.”

They have come to a grimy parking lot outside a tacky mall in Rishon LeZion, deep in the center of Israel, to protest the wedding of an Arab Muslim Israeli and an Israeli woman born Jewish, who converted to Islam. The wedding is in a hall about 200 meters away from the protest, as per a court order. About 200 protestors have gathered in the thick, hot air. The couple talking to me come from Rishon; they say they are secular. 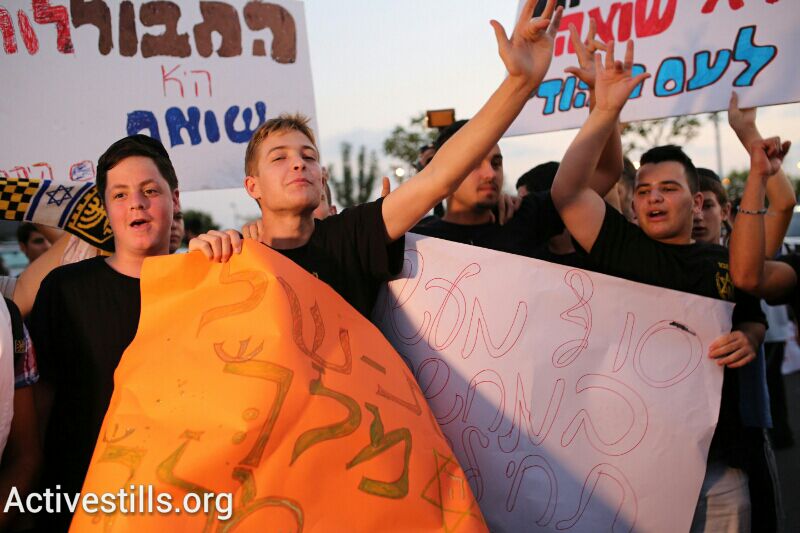 Right-wing activists from the anti-miscegenation group Lehava protest outside the wedding ceremony of a Muslim man and a Jewish woman in Rishon LeZion. (photo: Activestills.org)

The band of youth who have been chanting close by start jumping, in formation, screaming: “There are no classes in Gaza/because there are no kids in Gaza!” – referring to the hundreds of children killed by Israeli forces during Operation Protective Edge – and “Jews have souls; Arabs are sons of bitches!” The secular husband gestures towards them. “I don’t agree with that ‘death to Arab’ stuff. It’s too bad this has become a platform for extremism.” He bounces a giggling, pigtailed toddler. “We are here to give the bride’s family hope, to remind them: it’s reversible.”

The ingredients are all there for an explosion. Large placards with elaborate slogans, such as “what future can there be for someone who forgot her past?” are spread on the ground for participants who might want one. A 15-year old girl in a long skirt holds a huge canvas sign speaking of shame. The core of the protest is a group of wild-eyed teenage boys, dotted with far-right stalwarts such as former MK Michael Ben Ari and Kahanist Hebron settler Baruch Marzel. A left-wing counter-protest in support of the wedding is taking place across the way; one of them murmurs that the anti-wedding group is from La Familia, the thuggish sports fans widely thought to have been behind the murder of Mohammed Abu Khdeir, in July. 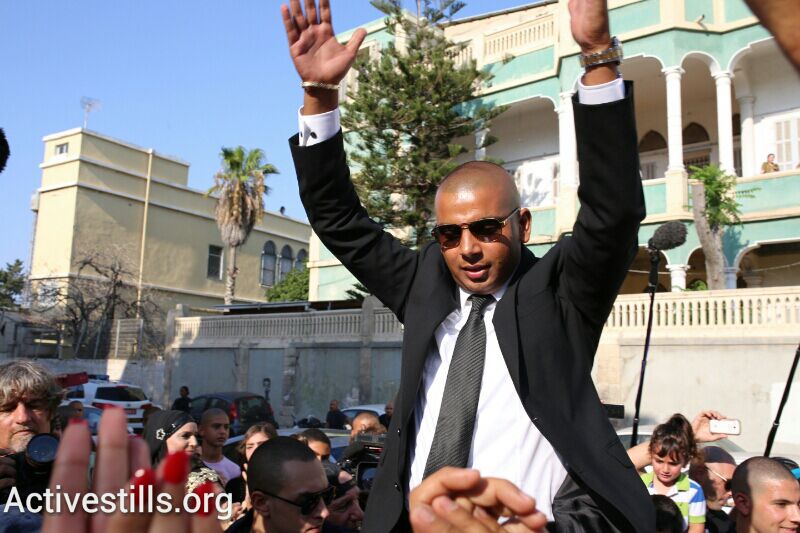 Mahmoud Mansour celebrates in Jaffa before heading to out to his wedding reception. (photo: Yotam Ronen/Activestills.org)

Many of the protestors are wrapped in Israeli flags, draped over black T-shirts of “Lehava: The Jewish honor guard.” Lehava is a self-anointed “anti-assimilation” movement. The previous week, the group posted Mahmoud and Morel’s wedding invitation on the Internet, exhorting followers to come demonstrate. Mahmoud and Morel sought a court injunction.

Emotions rose: On the day of the wedding, the court ruled that the demonstration would be permitted at a distance of 200 meters from the hall, and the activists would not be allowed to communicate with the couple for 90 days. President Reuven Rivlin condemned the demonstration as racist incitement, and writing on his Faceboook page, gave the couple his blessing.

Fearing violence, earlier reports said the couple was forced to hire 33 security guards at their own expense – for NIS 15,000 (over $4,000). In addition, the parking lot is full of police who push the demonstrators back when they try to get closer to the wedding hall. Still they advance; within an hour, Lehava activists are just across the street from the entrance. An angry counter-protestor demands that a policeman enforce the 200-meter distance. The policeman responds that he does not have a copy of the court order on him, although it has been widely reported in the press.

The counter-protest supporting the couple is a gaggle of barely 50 people holding motley clusters of flowers, raggedly cut. They dangle small construction-paper signs saying “Freedom of Love!” decorated with hearts. What they lack in organization, they make up for in joy: they are singing a robust unaccompanied version of “The Flower in my Garden,” an iconic, fast-paced love song played at nearly every (Jewish) wedding in Israel. Whenever a wedding guest walks by, they cheer and clap “Mazal Tov!!” The guests, with women in high heels, head coverings and glitzy jewellery, smile with slight embarrassment and hurry toward a group of burly security men waiting to search them at the door. 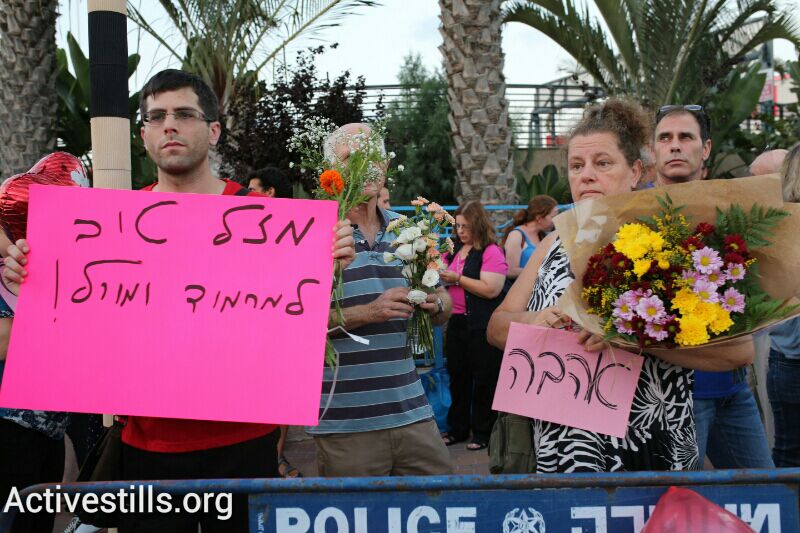 Counter-demonstrators show their support for Mahmoud Mansour and Morel Malka on their wedding day. (photo: Activestills.org)

Something about the situation has struck a nerve. Many of these counter-protestors tell me that they are not political and generally don’t go to demonstrations. I run into my neighbor, a 34-year-old man named Uriel who grew up in a Haredi family in Kfar Habad. About a decade ago, he defected from his community and became secular. He says this is his first demonstration ever. Nir, also 34, works for the appliance company Tadiran and says he is usually not an activist, but Lehava’s protest made his blood boil. “Next time it could be against people for the color of their eyes.” Meirav and Assaf, a young couple from Tel Aviv, echo the sentiment. Next, they say, it could be against Ashkenazi and Mizrahi marriages.

Lehava’s theme of “anti-assimilation” appears to be a sanitized label to win legitimacy for an organization known mainly for harassing people. One woman at the counter-protest has a partner from Darfur. She says she has been shoved and hit by Lehava members. When they threatened her with further violence on the Internet, she says she went to the police, who told her there was nothing they could do – she should hire a lawyer.

Those protesting the wedding are concerned about more than assimilation. Some say that the bride herself doesn’t realize her awful mistake. “Somewhere deep in her heart, she knows it is wrong,” says Simcha, a 51-year-old religious woman who immigrated from France in 1981. “You can’t convert to Islam – you’re born a Jew, you have a Jewish soul.” Others tell me that Jewish women have been manipulated, brainwashed or otherwise trapped into converting to be with Muslim men. Simcha says that Muslim men beat women and drag them by the hair. 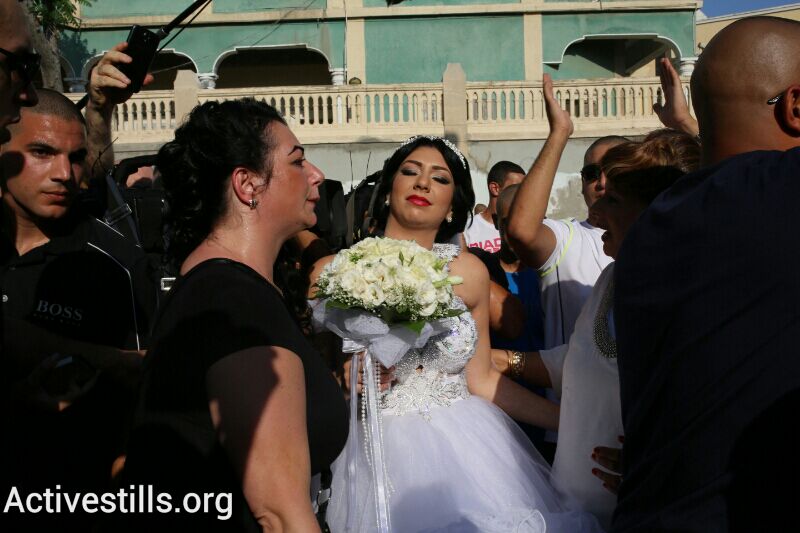 Another resounding theme is that the bride’s children, Jewish according to Jewish law, will be raised Arab. That makes them potential terrorists. One sign says: “You wanted a grandchild? You got a Shahid!” (martyr). The wife in an older religious couple from Kochav Yair, a well-heeled suburb in central Israel says, “The children could all turn out to be Hamas! They might be Jews killing Jews, and they wouldn’t even know it.”

What about the idea that a woman has a right to choose, that it’s the couple’s private business? Tiferet, the 15-year-old from Beit Shemesh carrying a sign, is shy but firm. “Just because someone jumps off a roof doesn’t mean I’ll let her. She’s not only hurting herself. She’s hurting all of Am Yisrael.”

And there at the heart of the summer circus lies the core: a struggle to define, re-define, own or appropriate Judaism in the state of Israel today. Uriel, the formerly ultra-orthodox man, explains that Judaism is fundamentally racist, while a fellow pro-wedding protester chants “Judaism is not racism.” A Lehava activist shouts at cars looking for parking. “Whoever goes to the wedding is destroying Am Yisrael!” while others insist that assimilation is more dangerous than physical persecution.

Legal scholar Aeyal Gross, in an excellent Haaretz article, argues that the state itself set the stage for such attitudes by denying legal frameworks for religious intermarriage in Israel. Yair Ettinger, also in Haaretz, writes that the real problem in Israel is assimilation through alienation or apathy, not intermarriage. How many Israelis simply detest Judaism for all it has come to represent socially and politically here? In my experience, Uriel, now a sworn atheist, represents many secular people with less dramatic stories.

But last night what might have been a healthy debate looked for all the world like anti-miscegenation activities from some of the ugliest days of American not-so-distant history. Gross writes that the very fact of a public discussion about such a wedding is shameful. Meanwhile, one protestor said, “We want the bride to have a pinch in her heart. We want her to know that she’s missing something.” What? Membership in the community of Lehava?

Deep in their own hearts, the protestors, too, know about secular Israeli alienation from Judaism; but they may not know or recognize their culpability. One older religious woman referenced the “Sh’ma” as she spoke to me, perhaps the most important prayer in the Jewish canon. She paused and said “do you know that sentence?”

BECOME A MEMBER
More About intermarriage 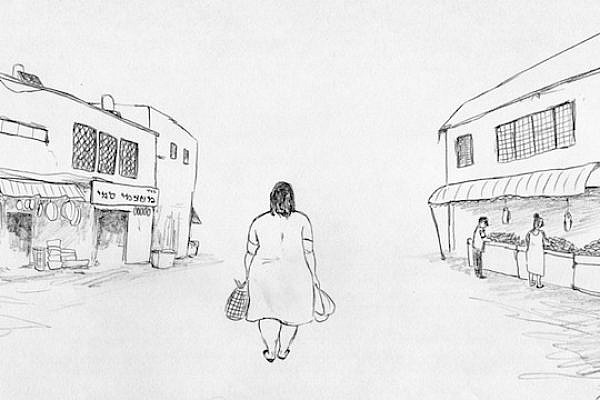 To my Ashkenazi girlfriend, and the one who is yet to come
It’s fairly common these days to hear people in Israel claim that there can’t be racism because everyone is marrying everyone else, regardless of ethnicity. Except that’s not really true. By Adi Sadaka Part 1: A certain kind of truth When I began studying film five years ago, one of the first movies they showed…
By Cafe Gibraltar October 28, 2014 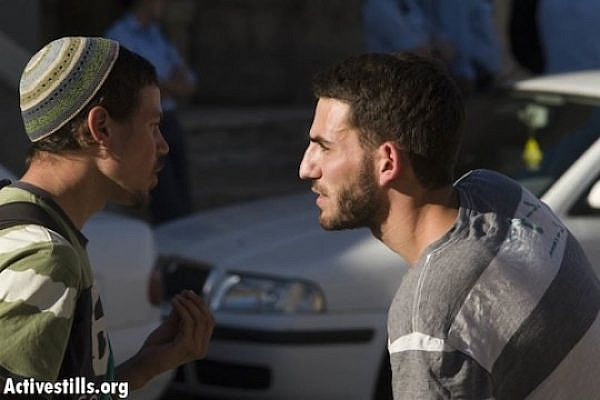 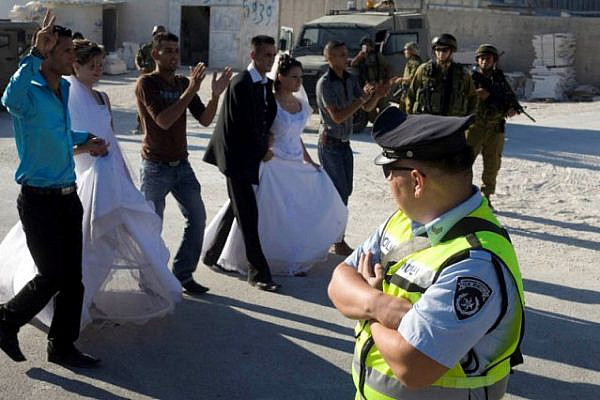 Court to allow anti-Arab protest outside Jewish-Palestinian wedding
A Palestinian citizen of Israel and his fiance, a Jewish Israeli who converted to Islam, have turned to the courts to try and prevent a protest planned at their wedding Sunday night, Haaretz reported. As I reported here Thursday, the anti-miscegenation, anti-Arab group Lehava publicized the couple’s wedding invitation on social media in full with date and…
By Mairav Zonszein August 17, 2014