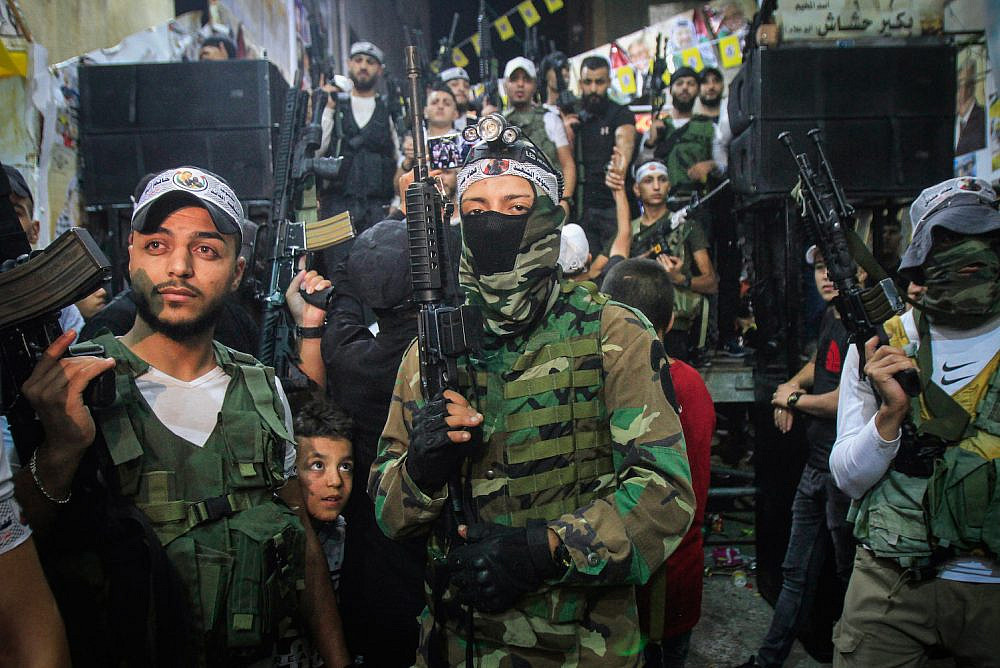 Despite near-daily Israeli military incursions into Palestinian cities in the north of the occupied West Bank — particularly Jenin and Nablus — that continue to result in severe and often deadly clashes with Palestinian resistance forces, the southern West Bank seems to be maintaining a tense quiet, at least for now.

Why is armed resistance in the northern West Bank growing but not in the south? Will it spread beyond the north? Will it continue? Through conversations with journalists, commentators, and political activists, it became clear that there are no easy answers to these questions. One reason for the difficulty is that the armed resistance is acting relatively independently, with no centralized political movement putting forward a plan and no leadership outlining a clear path.

“Socially speaking, there has long been overt public support for the resistance in Jenin and Nablus,” said Akram Al-Natsha, a journalist from Hebron attempting to explain the phenomenon. “During the Second Intifada, for example, everyone knew about and could clearly see the military action in these cities, but in Hebron it was all done in secret. That’s why, to this day, we still see less military activity in Hebron, while it’s much more common in the north of the West Bank. It’s an issue of tradition, that the people [in the north] are sympathetic toward armed resistance.”

The Palestinian Authority (PA) also plays a role in dividing the West Bank into north and south. According to Al-Natsha, the unconcealed popular support for the resistance in Jenin and Nablus makes it very difficult for the PA to conduct arrests there. The PA is forced to enter Nablus with large security forces, and still, it encounters fierce opposition, all of which was visible during the recent arrest of Hamas operative Musab Shtayyeh. Security operatives don’t enter the refugee camp in Jenin at all. 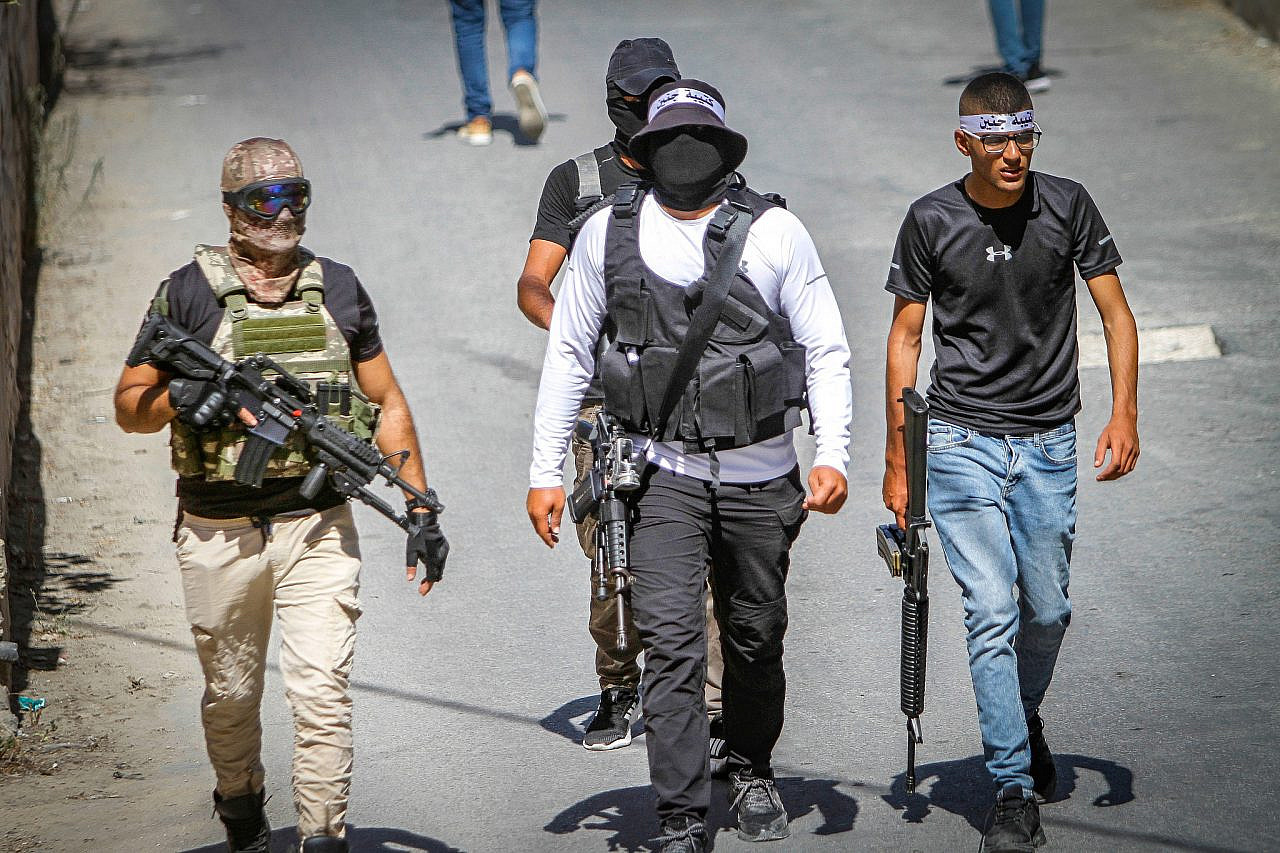 ‘The PA is one of the main obstacles to resistance’

A number of the commentators who spoke to +972 said that the PA considers every act of resistance to be an act in opposition to its very existence. “They say that the PA supports popular resistance, but that’s not true. The PA suppresses it as well,” said Al-Natsha.

The disparity between the level of control the PA maintains in the north versus the south is visible in numerous ways. Not only is it more difficult for the PA to act in the north, but there is a major gap in the number of arrests carried out in each region. “The PA’s security forces carry out far more arrests in Hebron than they do in the north,” Al-Natsha said. “The occupation army is also more active in the south. All of this diminishes the resistance in the south relative to the north.”

Ahmed Abu Hashash, a resident of Al-Fawwar refugee camp near Hebron in the southern West Bank, witnessed this firsthand. A few days before he spoke to +972, he was released from brief detention in a PA prison.

“It’s been felt for some time that the PA flexes its muscles in order to maintain calm in the south of the West Bank,” he said. “I know dozens of young people who have recently gotten calls from Palestinian officers demanding that they come in for interrogations and threatening conversations, but they refused.” 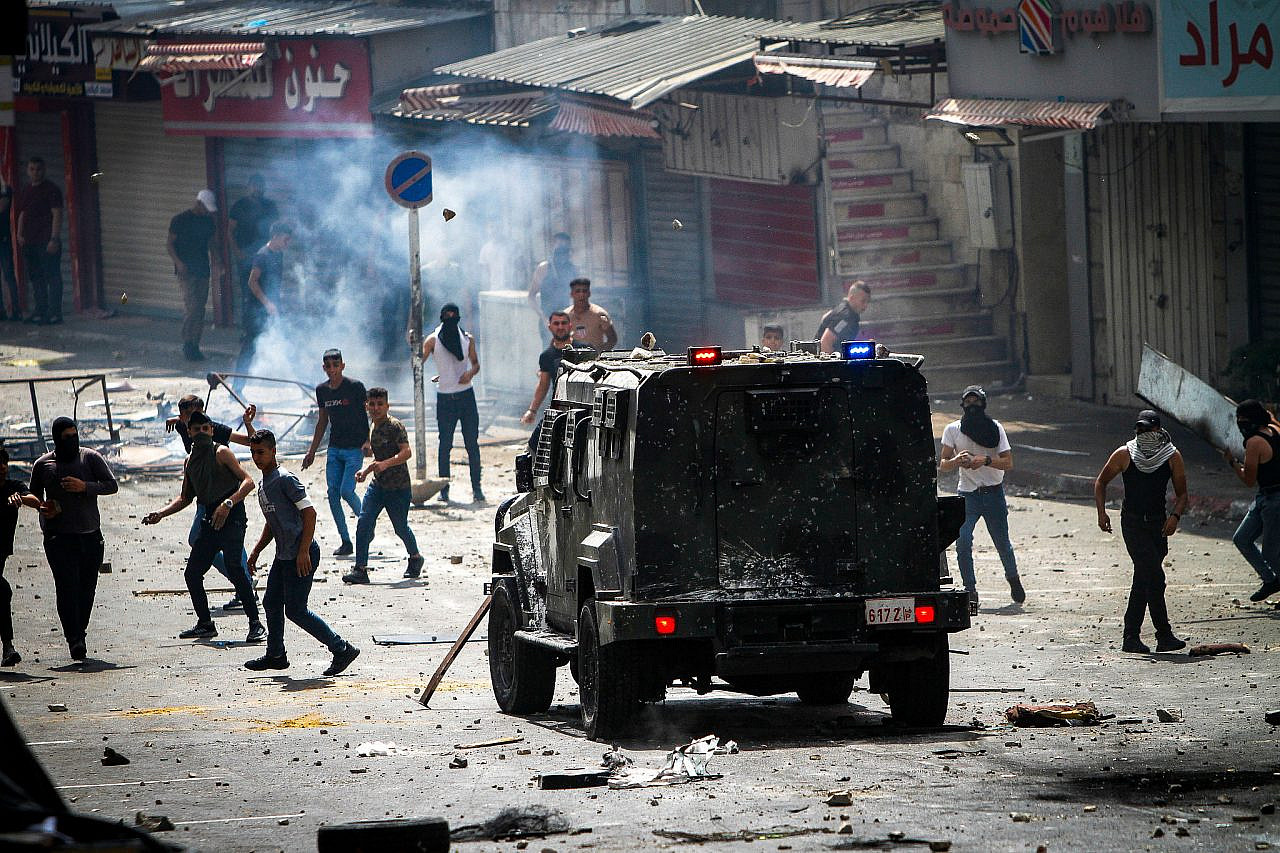 Palestinians clash with PA security forces in Nablus, in the West Bank on September 20, 2022, following the arrest of Hamas members by Palestinian security forces. (Nasser Ishtayeh/Flash90)

Abu Hashash, who has two brothers sitting in Israeli prison, was arrested by the PA on the suspicion that he transferred 1,400 shekels into the bank account of one of his imprisoned brothers from an entity the PA considers an enemy — Palestinian Islamic Jihad (PIJ). Abu Hashash completely denies the charge, testifying in his trial that he transferred the money from a legal source, namely the PA’s own committee for prisoner affairs. Though he was released from prison, Abu Hashash sees his arrest as part of a general trend: the PA is increasingly involved in efforts to clamp down on competing factions in the south of the West Bank, such as PIJ, Hamas, and the Popular Front for the Liberation of Palestine (PFLP).

“The Palestinian Authority is one of the main obstacles in the face of the resistance, because it chases down anyone who is armed and arrests them,” said Al-Natsha. “Additionally, during this current wave [of resistance], the PA is, even more than usual, caught between a rock and a hard place: on the one hand, regular Palestinians blame PA security forces for acting in opposition to popular resistance and they are furious about the arrests of armed resistance fighters. On the other hand, Israel blames the PA after every act of resistance that they fail to thwart.”

Another resident of the area, Ismail Abu Hashash, doesn’t hang his hopes on the current resistance in the north of the West Bank. An activist with the leftist Democratic Front for the Liberation of Palestine (DFLP), I asked him why Palestinians are taking up arms in the north but not in the south. In his mind, the question is irrelevant.

“Right now, the armed resistance is sporadic and disorganized,” he said. “These waves can start all of a sudden, by surprise, and can go away just as suddenly. It’s resistance for the sake of resistance — without a political vision. It is a way to reject the occupation, to reject the status quo, which is essentially a political vacuum with no possibility for statehood on the horizon.”

His critique cuts deep: “Our problem is that, since the end of the Second Intifada, the Palestinian factions have failed to come together, in a serious way, to build a united national plan. What’s our goal? What’s the political solution, and how can we resist in a coordinated way so that we can achieve it?” 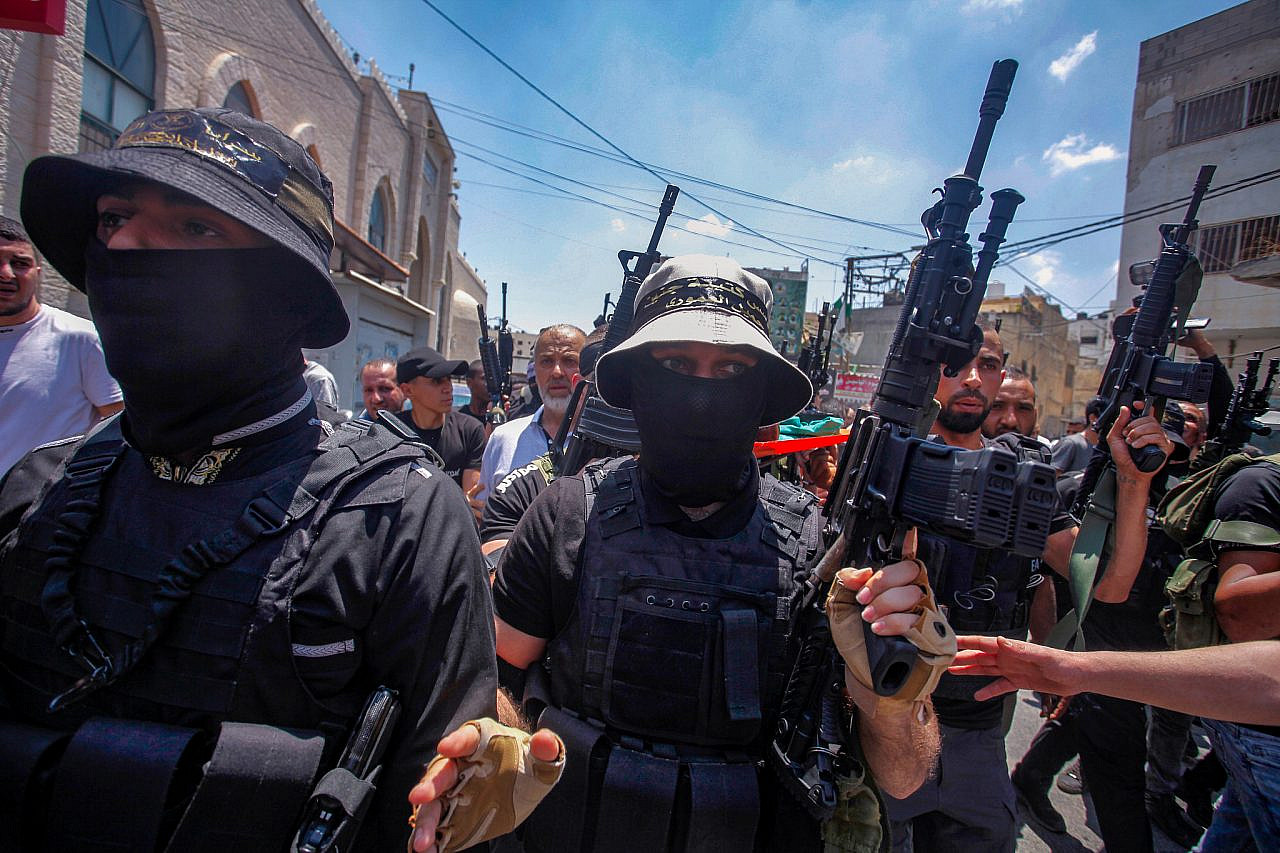 Palestinian gunmen and mourners take part in the funeral of Mohammed Marei, 25, who was killed during an Israeli army raid on Jenin refugee camp in the West Bank, June 29, 2022. (Nasser Ishtayeh/Flash90)

“The Palestinian factions are fighting with each other over narrow partisan goals and they have no vision,” Abu Hashash said. “One reason is that each faction relies on a different source of foreign funding. Each faction then has to act in light of the goals prescribed to them by the foreign group that funds them. This political money, unfortunately, destroys — or at least seriously weakens — the Palestinian forces on the left, like the DFLP and the PFLP.” It is widely known that PIJ receives financial support from Iran, whereas Hamas is supported by Qatar and Turkey.

“But in spite of this situation,” Abu Hashash continued, “the Palestinians continue to rise up against the occupation. They do it by themselves. This habit didn’t come easily. I don’t think you have to resist with weapons and stones — you can also resist through sumud [steadfastness]. In the northern Jordan Valley, in Jerusalem, in Masafer Yatta, in Beita, in every place where they are kicking Palestinians out, we have to resist, we need to join the ranks and build a new, shared national vision.”

A journalist and writer from the Jenin refugee camp, who asked to be interviewed anonymously due to the growing tension inside the camp, also spoke about the “resistance of individuals” — which may well spread south, though he finds it impossible to predict — in contrast with “collective resistance,” which was a hallmark of the First and Second Intifadas.

“The current wave — the resistance of individuals — did not come out of nowhere,” he explained. “It’s rooted in the aftermath of the Second Intifada and the Palestinian political split that happened afterwards. During the Intifada, the resistance against the occupation was both broad and deep, and every Palestinian faction participated, including the PA. Israel targeted and suppressed all of the factions and assassinated the majority of the leaders at the time.” 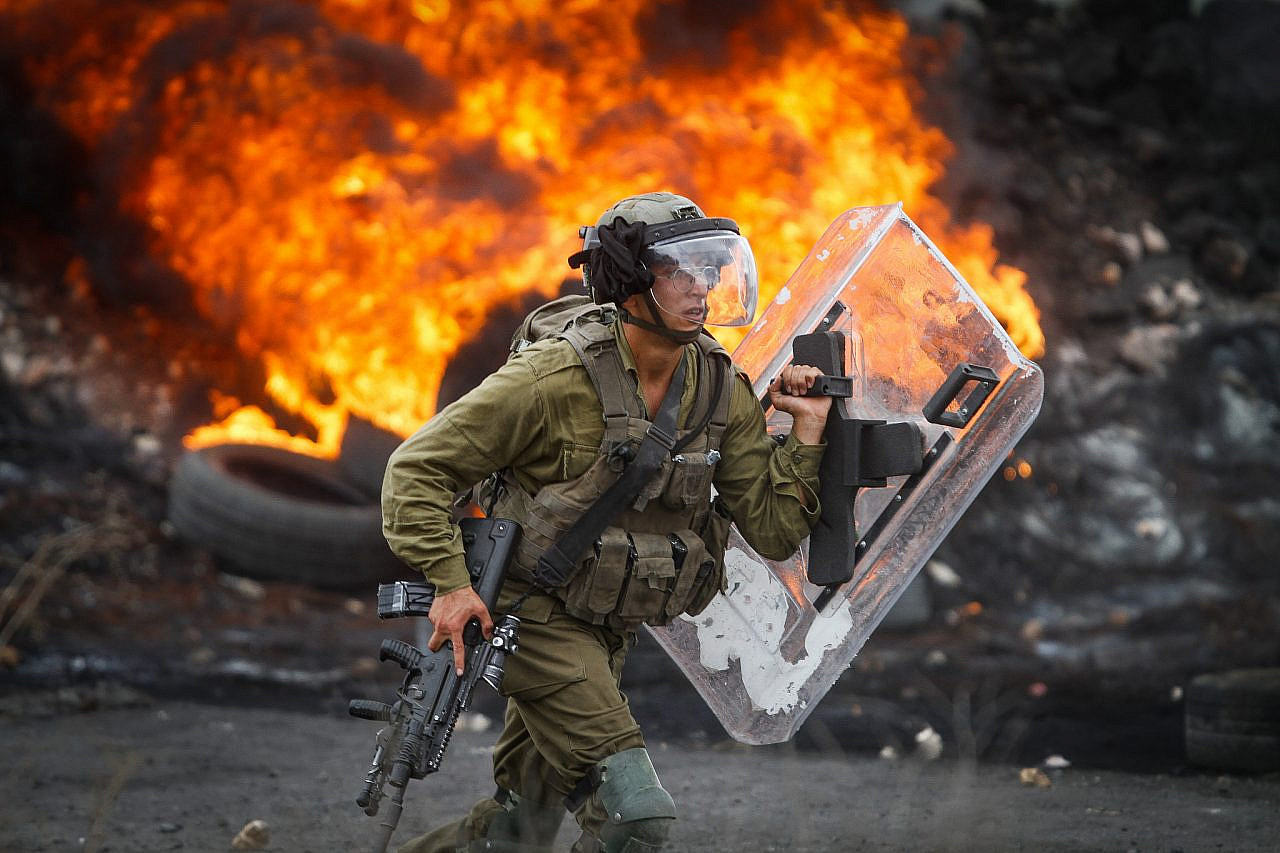 But then, he explained, the Palestinian split began. Hamas took control of Gaza and almost disappeared from the West Bank, while Palestinian Authority President Mahmoud Abbas disbanded the armed battalions of Fatah, in order to facilitate an agreement with Israel.

“This is one of the reasons why the West Bank has experienced a period of calm and stability for years,” said the journalist. “But the presence of the occupation, the oppression, the continued military control — all of these constantly fuel the need for resistance. And so, guerrilla fighting that isn’t organized by any faction began in the West Bank. Average Palestinians understand that they need to defend themselves and need to establish popular movements in order to fill the void left by the various political factions.”

The journalist rejected the premise that the West Bank could be neatly divided into a “north” and “south.” The period from 2015 to 2016, he said, saw a number of Palestinians committing stabbings against both Israeli security forces and civilians. “Most of [the stabbers] came from around Hebron, Bethlehem, and Jerusalem, while the north notably didn’t participate.” In other words, sometimes the south is the locus of resistance, and sometimes the north is, and there is no meaningful difference between the two.

During that period, which is commonly referred to as the “Intifada of Knives,” which lasted for a little more than a year, 70 Palestinians from the Hebron District were killed, as opposed to only 19 Palestinians from the Jenin district, most of them during attempted stabbings. Despite the disparities, these were not acts of armed resistance against soldiers, but rather stabbing attacks, strengthening the claim that resistance is sparked intermittently, in different places. 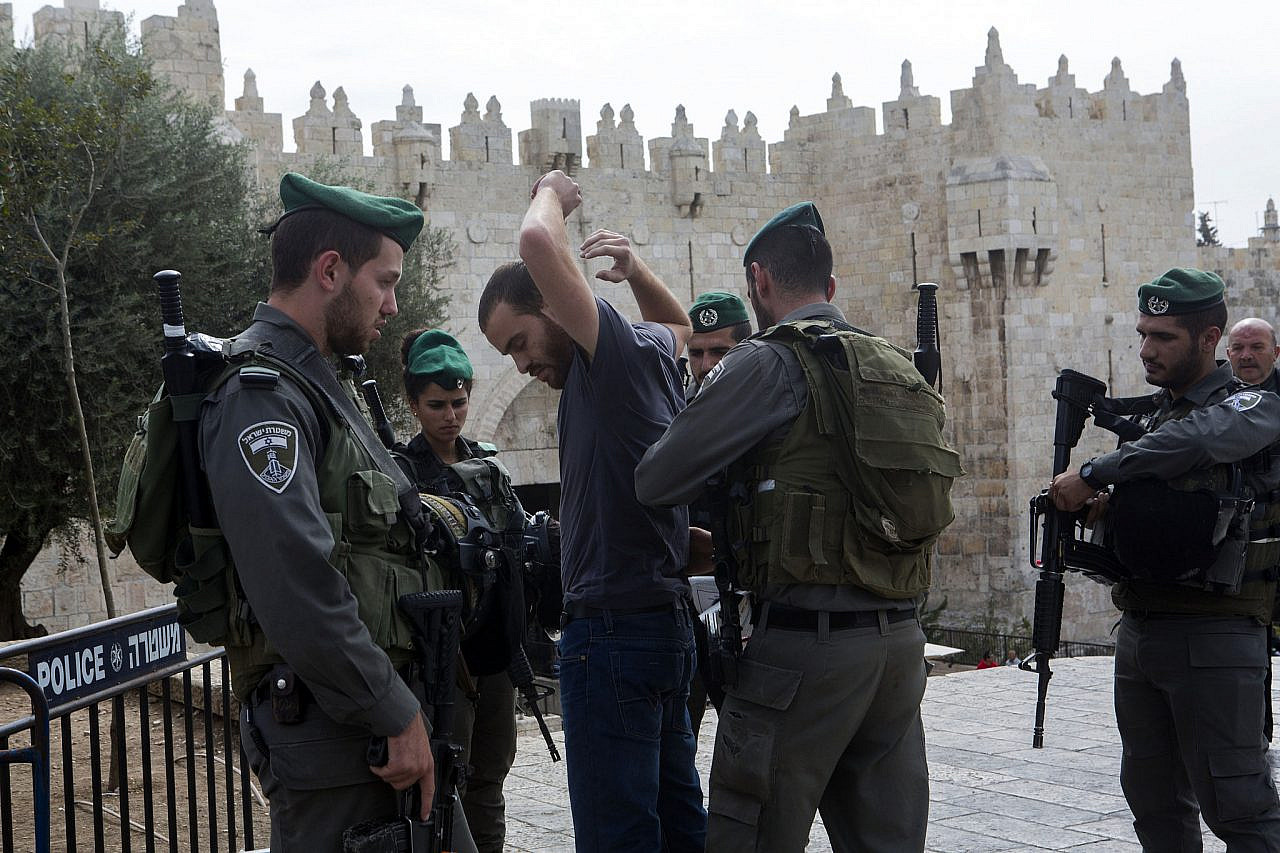 And yet, as several of the interviewees noted, Jenin does have a unique history as a center of Palestinian resistance that stretches back a century. In the 1920s and 1930s, Izz ad-Din al-Qassam — after whom Hamas’ military wing is named — assembled groups of armed Palestinians, many of them peasant farmers from northern Palestine, to fight against Zionism and British colonialism. When he was forced to move his operation underground, he hid in the hills between Jenin and Nablus. British police eventually found him and killed him in 1935, near Jenin.

The journalist pointed to another example: the Fatah-affiliated group Al-Fahd al-Aswad (The Black Panther) that arose in Jenin and Nablus during the First Intifada. “Hundreds of the members of the group were killed or imprisoned, and some of them are prisoners in Israel to this day,” he explained. “The area around Jenin has been the birthplace of revolution and waves of protest throughout the history of Palestine — first during Ottoman era, and then during the British, and still now under Israeli occupation. Taking a broad historical view of the phenomenon helps us understand what’s going on in the northern West Bank today.”