At the core of Israel’s settlement outpost system lies the systemic violation of Palestinian human rights.

Civilian Israeli security guards try to stop Palestinians from working their land in the West Bank village of Sinjil, near the Israeli outpost of Givat Haro’e , August 18, 2013. Three years after settlers invaded their land, landowners from the village of Sinjil arrive with a High Court injunction ordering them to have access to their land. (Photo: Activestills.org)

If we had to look for a good example of the meaning of the outpost system – the unofficial settlements Israel builds in the West Bank – we could hardly expect a better one than that supplied by the minister of defense himself. Commenting on a legal appeal that — contrary to some reports, Yesh Din is not part of — demands the removal of the Mitzpe Kramim outpost, Defense Minister Moshe Ya’alon said (Hebrew): “This location was established legally, with the support of the prime minister and the defense minister. True, later someone appealed, an Israeli organization of course, a leftist organization that found some Arab who claims ownership.” As painful as it is that this is the level of understanding displayed by a senior government minister, the interesting part here is actually the where Ya’alon talks about “some Arab who claims ownership.”

With some brutality, Ya’alon touches on the main problem of the outpost movement: its violation of Palestinian human rights in the West Bank. Yesh Din’s research over the years, and particularly its report, “The Road to Dispossession,” which uses the outpost Adei-Ad as a microcosm, finds that the creation of an outpost is a steady source for unceasing violation of the rights of the Palestinian residents in adjacent villages. This violation is inherent in existence of the outpost.

Let me explain. When an outpost is created, it grabs territory, which later becomes the core of the outpost. This territory often includes private Palestinian land. Around the core there is what is known as the SSA – “special security area” – which Palestinians may not enter except on special occasions, since it serves as the perimeter of the outpost. Outside the SSA there is Palestinian land that becomes a source of friction. 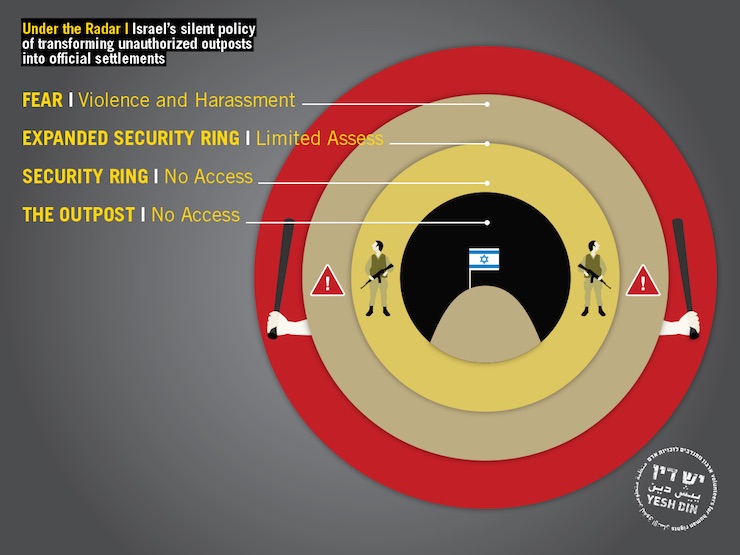 Why is it a source of friction? Because the goal of outposts is to expand. Adei-Ad, our test case, now includes territory nearly 30 times its original size. How do outposts expand? Israeli civilians arrive in the vicinity and either attack Palestinian farmers or damage their crops. This is done in order to terrorize them and force them to abandon their land. When the land is abandoned, it is taken over.

In order to do so, of course, the outposts require assistance from their main partner, the government of Israel: soldiers who do not prevent violations such as settler riots; policemen who do not properly investigate attacks on Palestinians; prosecutors who close cases without due cause; a Civil Administration that does not enforce its own demolition orders; government offices that hurry to provide services for illegal settlements; and at the end of the line – the state attorneys, who time and again appear in court to defend these massive violations of the law, not to mention postponing bringing an end to them for long as possible. Time after time, the state proposes legalizing these outposts as a gift to the lawbreakers.

The first violation of Palestinian rights is that of their right to property — in other words, the land that is lost when Israeli civilians take it over. A short while after that comes the violation of their right to life and security: if you go to work your land, note that there is a chance you will not return home in one piece. Palestinian freedom of movement is also violated: with the creation of an outpost and the declaration of an SSA, its territory keeps expanding, and Palestinians are forbidden from entering.

All this ultimately leads to the violation of Palestinians’ right and ability to make a living. Two of the villages near Adei-Ad have already been emptied of many of their residents. An agricultural settlement, after all, cannot exist if its land is taken away by force.

We are not dealing with just one case: there are about 100 outposts. Every time one of them is legalized, it creates a precedent for the legalizing the next outpost, and creates incentives for Israeli civilians to seize more land and terrorize more Palestinians.

This isn’t an accident, it’s a system. The outposts are approved, as Ya’alon admitted, by the defense and prime ministers. This is the system, as shown in the previous post, in which all government offices are complicit; this is the system whose existence is now out in the open, with no blushing, announced by the defense minister. This system means the systemic, intentional, violation of Palestinian human rights, and it must stop.

BECOME A MEMBER
More About outposts 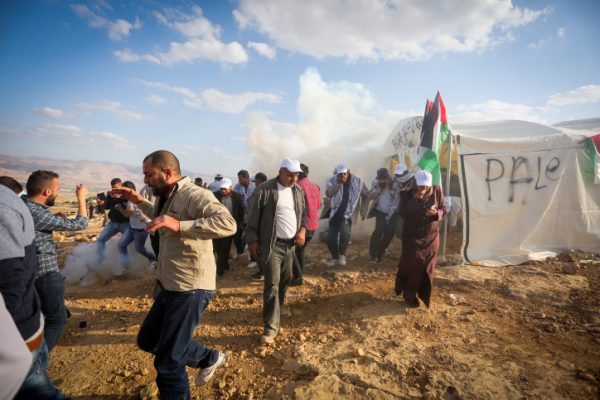 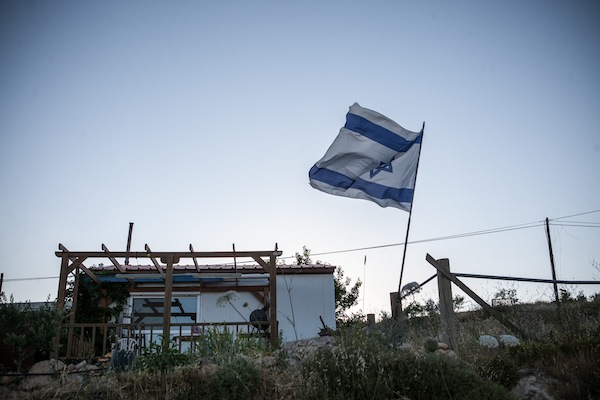 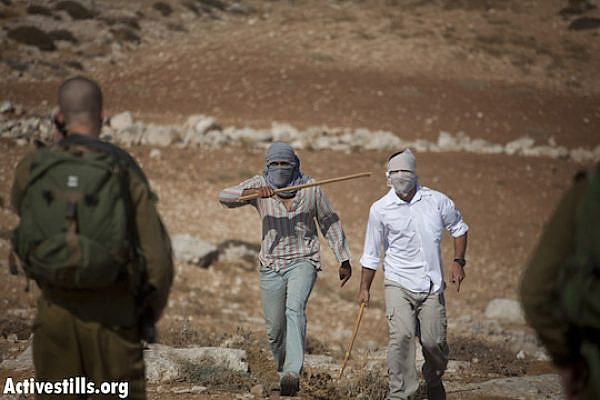 Settlers attack, wound six-year-old Palestinian girl
West Bank settlers attacked a six-year-old Palestinian girl with rocks in the South Hebron Hills on Saturday, wounding her in the head, according to Israeli human rights NGO B’Tselem. The girl was wounded after a group of masked settlers threw rocks at her near the entrance to the illegal outpost of Havat Maon, said B’Tselem.…
By Edo Konrad March 21, 2015