We’re pleased to introduce Col. Pinto, Commander of the IDF’s Binyamin Brigade, who holds a practical veto over decisions of the High Court of Justice. 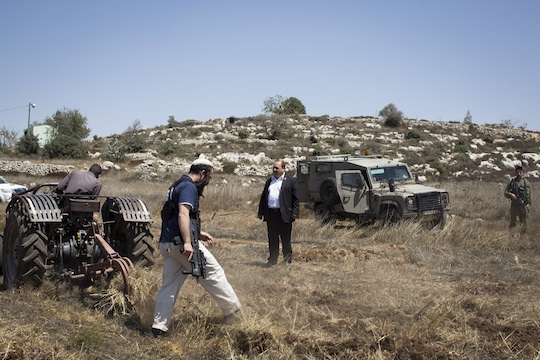 Israeli private security guards try to stop Palestinians from working their land in the West Bank village of Sinjil, near the Israeli outpost of Givat Haro’e , August 18, 2013. Three years after settlers invaded their land, following the HCJ injunction order issued in the petition filed by the landowners through Yesh Din, landowners from the village of Sinjil arrive to their land for the first time. (Photo: Activestills.org)

Last month we reported that after a three-year sisyphean legal struggle, the IDF finally implemented a High Court of Justice order that Ali Shabana be allowed to access his land; and that the son of the owner, accompanied by a Yesh Din team, ploughed the land.

All’s well that ends well? Proof that a dim legal dawn finally breaks through the mist? Not quite.

The settlers, as we reported, were not happy that we saved the poor man’s sheep, and someone named Nachman, who represented himself as the security officer of the outpost Givat Ha’Ro’eh, summoned the IDF forces. Two hours later, Colonel Yossi Pinto, Commander of the Binyamin Brigade, signed a Closed Military Zone order, which forbade the owners of the land from reaching it and effectively ordered the end of plowing by the owners. It’s important to note that Shabana had informed the military in advance – through the Palestinian District Coordination Office – about his arrival; we, for our part, informed the state attorneys.

So, basically Col. Pinto decided that a High Court of Justice ruling is something that can be toyed with; that the colonel’s opinion, after consulting with the outpost’s security officer, is easily more important than that of three High Court justices, since, well, they are civilians and he is in uniform. Col. Pinto admittedly removed the trees the settlers planted in the plot in order to steal Shabana’s land, as the court ordered, but no sooner had he carried the order out than he returned to his usual position, that of a settler collaborator, and undermined the spirit of the ruling, which was that the land should be returned to its owners so they could do with it as they please. It’s important to note that Pinto’s behavior isn’t exceptional; you could replace “Pinto” with basically the name of any brigade, division or regional commander in the West Bank.

If so, the question is: what do we need a legal proceeding for? Why burn hundreds of hours of lawyers’ work, both ours and the state’s? In their case, Col. Pinto drilled a small new hole in the government’s budget – nothing to write home about given the Titanic-sized hole the army regularly forces in it, but even so. Why waste the justices’ costly time? Why lay waste to forest, why siphon away the ink of already-pale squids in order to print thousands upon thousands of pages, and then wrap them all in another quickly-extinct resource, the remains of dinosaurs lovingly crushed by the Earth for millions of years? Have you no pity for this planet? Why go to all these lengths?

Notice the effective and economical way Col. Pinto treated the issue: one dense and short page, prepared in advance so all you have to do is change the date from time to time. Admittedly, the Colonel, in his munificence, allows “dispensing copies of this declaration to whomever asks for it”, and yes, it is accompanied by a map; yet even so, who needs all the mess of a free and public legal debate, with all its costs when one can simply leave the issue to the tender mercies of efficient functionaries such as Col. Pinto?

The question whether Col. Pinto overstepped his authority is of particular interest. On one hand, we have a decision of the HCJ. On the other, the military commander, wrapped in his aura of awe, with all the authorities it accumulated in the Emergency Acts and other orders effective in the Occupied Territories: the combined powers of a Turkish Pasha, a British district commander, and the Israeli military commander whose order is sufficient to carry out collective punishment, such as the demolition of a house.

Experience shows that the High Court shies away from confrontation with this figure, who seems drawn from the nightmares of the Christian Day of Wrath: the dreadful judge sitting on his high throne, judging the quick and the dead, from whose judgment there is no appeal, before him there is no room for argument, only – since you can’t have recourse from the plea, as in the Jewish hymn, of “remember how you loved us, Oh Lord” – a protestation and supplication (“salve me!”) for mercy. And so, when the military commander, in his incarnation as Col. Pinto assisted by a jurist, says that this is his will, the HCJ will, as a rule, retreat. Even when the military commander openly disregards its rulings, the ancient maxim that two kings cannot use the same crown is always before the court, and it is leery of using the words “contempt of court.”

And so, in a short document mostly written in advance, Col. Pinto turned three years of legal arguments into dust, emptied them of their core – and thereby exposed the shaky foundations of the fiction of “the rule of law” in the Occupied Territories, and the inherent weakness of the High Court’s legal oversight. We ought to remember this.