The Israeli army is claiming that at least 12 of the 60 Palestinians it killed in Gaza on Monday were attacking soldiers when they were shot, but it refuses to answer why it killed the other 48. (Updated below.) 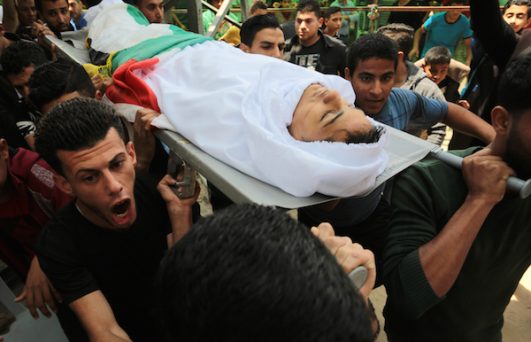 Mourners carry the body of 15-year old Palestinian Jamal Afana, during his funeral in Rafah, southern Gaza Strip, on May 13, 2018. Jamal who was shot in the head by Israeli forces near Rafah in southern Gaza on May 11, succumbed to his wounds the next day. (Abed Rahim Khatib/ Flash90)

In late march, just hours after Israeli snipers killed 17 protesters on the first day of the Gaza Return March, the IDF Spokesperson tweeted: “Nothing was carried out uncontrolled; everything was accurate and measured, and we know where every bullet landed.”

The tweet was later deleted, perhaps because of requests form journalists that the army explain specific bullets — for example, the one that struck and killed an unarmed man running away from the border fence, or the killing of journalists Yaser Murtaja and Ahmed Abu Hussein — that the army could not, or would not, explain.

Fast forward to this week. Since the 60 killings on Monday, the army has issued a series of dramatic messages about having stopped “terrorists.”

The army spokesperson claimed on Monday that it had killed 12 people who allegedly fired on Israeli soldiers from Gaza or attempted to plant explosive devices along the border fence — but said nothing about why it killed the 48 other Palestinians and wounded thousands of others.

On Tuesday, the army sent the following message to journalists (my translation):

After the most recent review by the IDF and the General Security Services (the Shin Bet, h.m.), at least 25 terrorists with a background in organized terror activities were killed during the violent public disturbances on May 14. Most of the casualties belong to Hamas or the Palestinian Islamic Jihad terrorist group.

This message obscures more than it clarifies. It raises two main questions.

First, is the army claiming that those whom it killed posed an immediate threat at the time they were shot, or that they were simply card-carrying members of a terrorist organization, which the IDF could not have known at the time soldiers opened fire, and which alone would not justify killing them?

Second, if the army knows that 25 of the Palestinians it killed were terrorists, what about the other 35 people it killed? How does it justify their deaths?

I sent these two questions to the IDF Spokesperson’s unit. They responded simply that they have no intention of answering these questions. The Seventh Eye, an investigative journalism site, similarly asked the IDF Spokesperson about the killing and wounding of journalists in Gaza; they did not receive any answers either.

The Gaza border area is heavily surveilled by Israeli cameras. Military drones send additional aerial photos of the area. Sixty Palestinians are dead — where are the images that show the threat that each one presented? Where are the pictures of the armed and dangerous terrorists whom Israeli soldiers had no choice but to shoot? Generally, when the IDF has damning footage, it doesn’t hesitate to publish it.

These questions demand answers, but the army does not feel the need to respond. The reason, at least partly, may be because there isn’t enough of a demand from the public. Most Israeli media outlets never challenge the necessity of the killing and accept as a given the need to shoot — and kill — unarmed protesters. The public, it seems, feels similarly. And that is precisely the problem.

Update (May 16, 2018):
A Hamas official on Tuesday claimed that 50 of the people killed by the Israeli army in Gaza on Monday were members of the Islamist organization. That does not change anything. The retroactive revelation that a large majority of the dead were members of Hamas — information that was not known to the soldiers pulling the trigger and nor to the rest of the military or Shin Bet — doesn’t change the question of whether they should have been shot. If a Hamas member approached the fence and wasn’t armed and didn’t pose a threat to anyone then it is still not justifiable to kill them. The retroactive discovery that he is a Hamas member does not change that one bit.