The personal losses of Al Mezan’s team are a microcosm of what Israel’s military operation is doing to Gaza’s population. If Israelis met them face-to-face, would they tell them the same excuses for those civilian deaths as they tell themselves and the world?

On August 21, the father, step-mother and niece of Issam Younis, director-general of the Al Mezan Center for Human Rights in Gaza, were killed as a result of an Israeli air strike on a nearby house; five other family members, including a three-year old and two-month old, were wounded. The home of another Al Mezan staff member, Yousef Abu Slaimeh, was heavily damaged and 17 of his family members injured. The strike was allegedly targeting the home of militants, but the force and debris from the multiple missiles severely affected the surrounding households.

These are not the first terrible losses that Al Mezan’s dedicated human rights workers have suffered during Israel’s current military operation. Two weeks ago field researcher Anwar Al Zaaneen was killed by an Israeli missile as he met a maintenance crew to fix the water connection to his home. Other staff members have lost relatives and friends, while also fearing for themselves and their families during Israel’s heavy bombardment across the Strip. As international relations director Mahmoud Abu Rahma says, this is the third war that many of their children have had to experience, trapped in their homes and unable to sleep from the constant noise of jets and explosions. 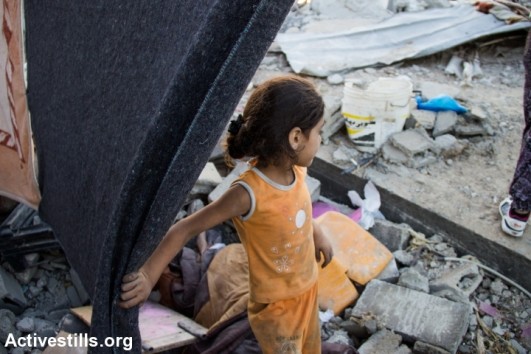 A Palestinians child stands in front of a destroyed house in Beit Hanoun following bombardment by Israeli forces, northern Gaza Strip, August 11, 2014. According to OCHA, 16,800 homes in the Gaza Strip have been destroyed or severely damaged, leaving 370,000 displaced. (photo: Activestills)

The Al Mezan team is a microcosm of what Israel’s military operation is doing to Gaza’s 1.8 million people. It has now killed over 2,000 people – the majority of them civilians – wounded many more, caused wanton destruction to neighborhoods and vital infrastructure, and displaced hundreds of thousands from their homes. Furthermore, Al Mezan’s stories, like thousands of others, debunk Israel’s continued efforts to conceal the real effects of its military operation (see B’Tselem’s infographic on Gazan families bombed at home). Many Israelis, most of whom support the war, still insist that the army does not “intend” to harm civilians, and that the military operation is being waged with unparalleled care and precision.

So what would these Israelis who support the war say to Issam, Yousef and Anwar’s family and to other Gazan victims? If Israelis met them face-to-face, would they dare tell them the same excuses for civilian deaths as they tell themselves and the world? Would they tell Issam, Yousef and Anwar’s family and all the other Gazan victims that their loved ones’ deaths and injuries were an “accident”? Would they insist that they should “blame Hamas” for the Israeli missiles that destroyed their homes? Would they claim their relatives were “human shields”? Would they say that their families were “raised by a culture of hate”? How do the deaths of Al Mezan’s staff and family members fit into the belief that the army’s tactics minimize civilian casualties? Would Israelis think their own claims sound reasonable, or truthful, in the face of what was done to those families?

It is troubling to see so many Israelis encouraging this self-imposed blindness to the actual effects that the war is having on the people of Gaza, believing that diversionary arguments of “intentions” could somehow outweigh what actually happens on the ground. It is as if they believe that the 1,400 Gazan civilians killed in the last few weeks – including those mentioned above – do not count in the real world, simply because the army supposedly did not “intend” for them to be killed. Similarly strange is the narrative that attempts to place blame for civilian deaths on the casualties and targets themselves, rather than those who pulled the trigger and gave the orders. 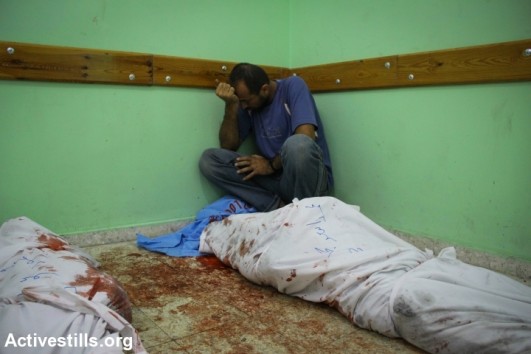 Bodies lie on the floor of Kuwaiti Hospital after Israeli attacks in Rafah, Gaza Strip, August 3, 2014. Since Al Najjar Hospital was closed, Kuwaiti, a nearby private hospital, opened its doors for emergency cases. (photo: Activestills)

These arguments and behaviors reveal a significant problem that characterizes Israel’s military conduct, permeates Israeli society’s views, and allows the harm faced by Al Mezan’s staff to occur without outcry or punishment: indifference. Just as damaging as the intention to kill is the sheer disregard, dehumanization and distancing that many Israelis have shown to the consequences of the violence waged in their name. The belief that indifference to civilian deaths is morally better than intention is wrong. The idea that indifference will alleviate Israel’s responsibility for its military’s crimes is wrong. The worsening toll on Gaza’s civilians, from deaths to displacement to destruction, will remain a permanent feature of their lives as long as indifference continues to be Israelis’ main response to their state’s policies, which too many unquestioningly support.

It would be worthwhile for many Israelis to think about what they would say to Issam, Yousef and Anwar’s family and other victims before telling others that their loss and suffering in Gaza, including living under a choking blockade and their third war in five years, is for a good cause.

The writer wishes to dedicate this article to the Al Mezan staff, their families and their loved ones for their perseverance in the face of profound difficulties, both in their work and in their lives.